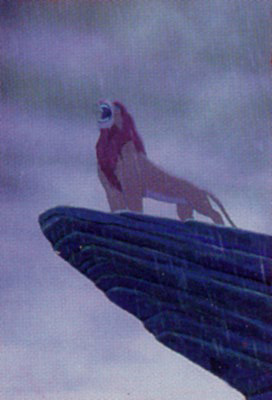 Where has the starlight gone?
Dark is the day
How can I find my way home?
Home is an empty dream
Lost to the night
Father, I feel so alone

You promised you'd be there
Whenever I needed you
Whenever I call your name
You're not anywhere
I'm trying to hold on
Just waiting to hear your voice
One word, just a word will do
To end this nightmare

When will the dawning break
Oh endless night
Sleepless I dream of the day
When you were by my side
Guiding my path
Father, I can't find the way...

Simba is born to royalty, and can't wait to grow up and take his father's place as king of the Pridelands. But, Simba doesn't really understand what it means to be king, and have the responsibilities of ruling the kingdom. Simba's sulky uncle, Scar, unbeknownst to the rest of the pride, is planning a massive coup of the kingdom, and persuades Simba to visit an elephant graveyard beyond the boundaries of the kingdom. Simba and his best friend, Nala, find themselves in trouble when they sneak off to explore the elephant graveyard and find a pack of hungry hyenas chasing them. Simba's father, Mufasa, appears in time to save the cubs, but upset at Simba's disobedience, having been ordered not to go beyond the borders of the Pridelands, lectures Simba on responsibility and priorities. Simba and his father are very close, and when Mufasa is killed after a wildebeest stampede, caused by the hyenas, and a betrayal by Scar, Simba flees the kingdom, nearly perishing in the desert. He's saved by Timon and Pumbaa, a carefree pair of bums, a meerkat and a warthog, who teach Simba their problem-free way of life. Years later, Simba is startled to find a grown-up and beautiful Nala in the jungle. She fled the kingdom to find help and food, as, since Scar took over in Mufasa and Simba's absence, the kingdom is faltering and everything is dying. Nala tries to convince Simba to return, but having put his past behind him, and having blamed himself for Mufasa's death, refuses. Nala chastises him for his lack of compassion for his kingdom and his throne, and leaves Simba to consider his decision. Simba is visited by Rafiki, an old baboon friend and advisor of Mufasa's, who persuades Simba to look inside himself and find his true self. Simba is visited by Mufasa's spirit, and finally decides he has to challenge Scar and take his rightful place as King of the Pridelands. Joined by Timon, Pumbaa, Rafiki and Nala, Simba leads the pride in a revolt against Scar and the hyenas. Simba triumphs over Scar, when he learns that Scar killed Mufasa himself, and Scar is left at the mercy of the hungry hyenas. Simba continues the circle of life as king, with Nala as his queen.

The sequel follows the adventures of Simba and Nala's daughter, Kiara, as she struggles with her desire for independence, and her feelings for the heir to Scar's empire, Kovu. Simba finds himself feeling the same feelings of protectiveness and concern that he put Mufasa through years earlier. Simba has to learn a lot about trust and forgiveness, and in the end, Kovu has a change of heart and helps to defeat the encroaching Outlanders. Read more about the Simba's further adventures on Kovu's page.

Simba finds love in his childhood best friend, Nala, when they are reunited years later. Simba's devious and jealous uncle Scar is the cause of his woes. What do I have to say?

This is really one of Disney's finest animated films, past or present. The plot is spectacular, a sort of African take on Shakespeare's Hamlet, and the characters are charming and memorable. Simba is a true hero, having to overcome his own insecurities and his own feelings of regret and guilt, and coming out conqueror. Scar is a worthy adversary, vicious and villainous, and Nala's vivacious and sassy, but elegant character is a perfect complement to Simba's stubbornness later in the story. Simba's attitude is understandable considering his rough upbringing and childhood, but when he realizes out what he needs to do, he doesn't hesitate. This film is an achievement on many levels, and for many people, marked the pinnacle of Disney animation. 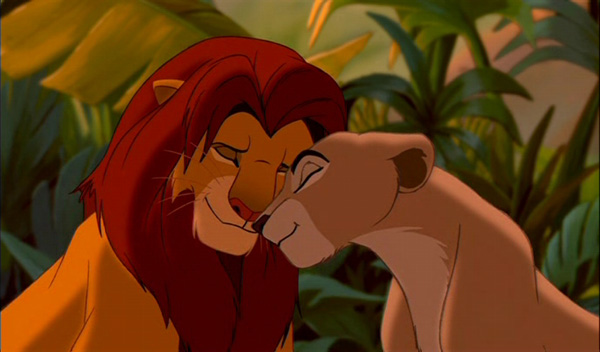 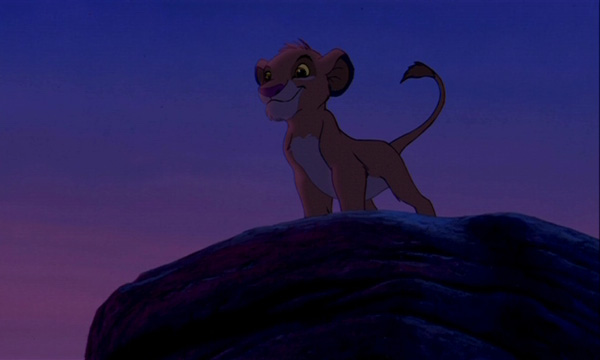 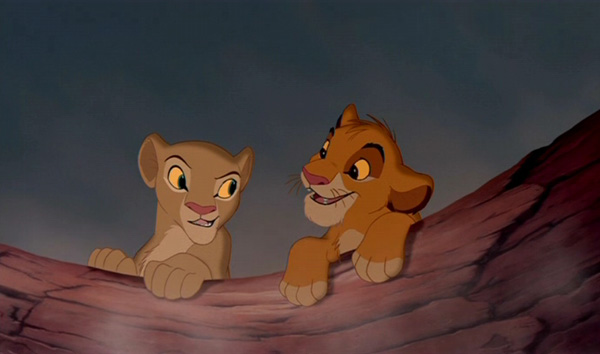 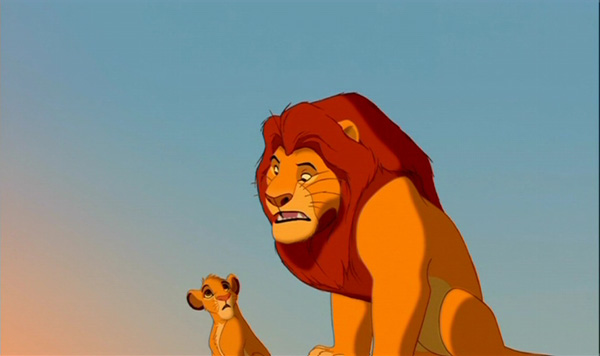 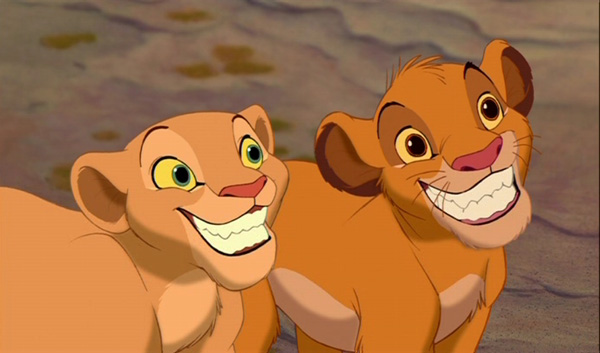 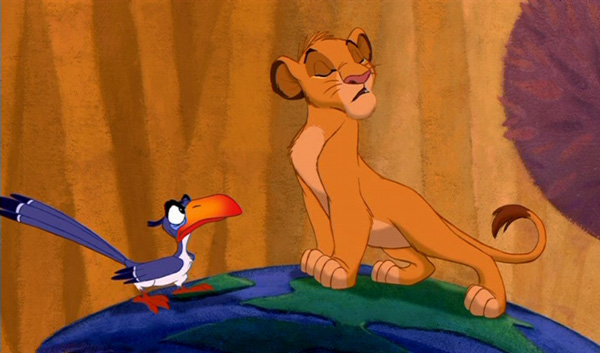 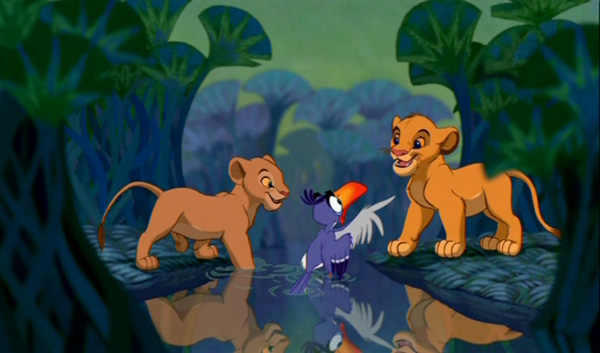 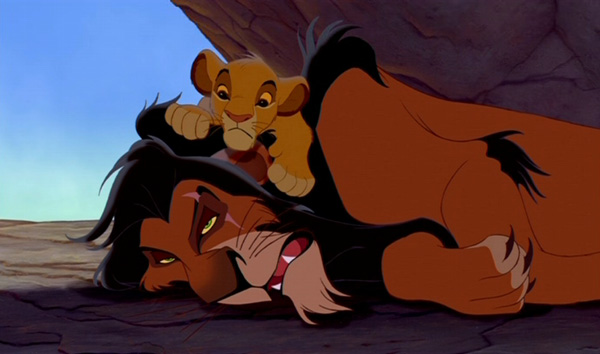 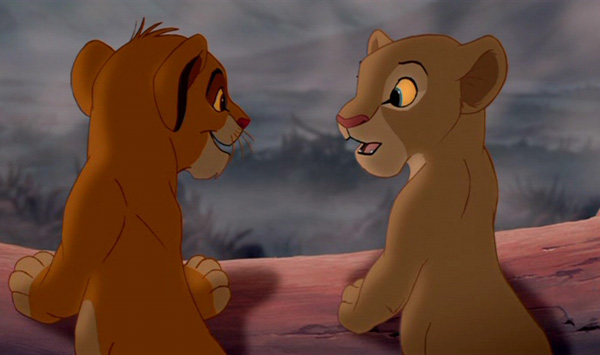 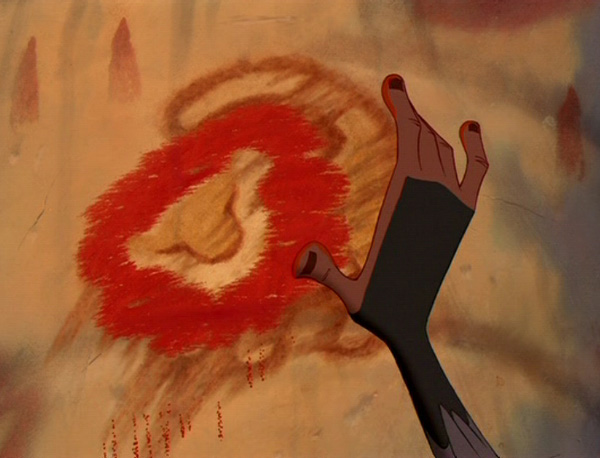 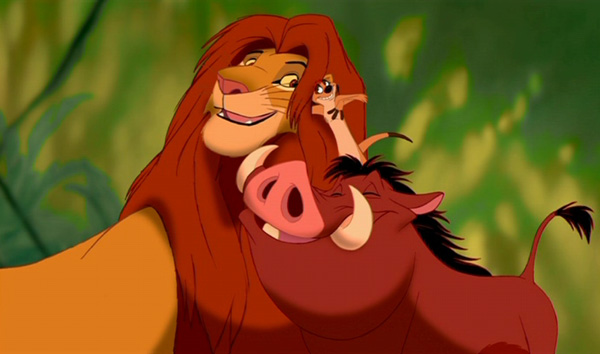 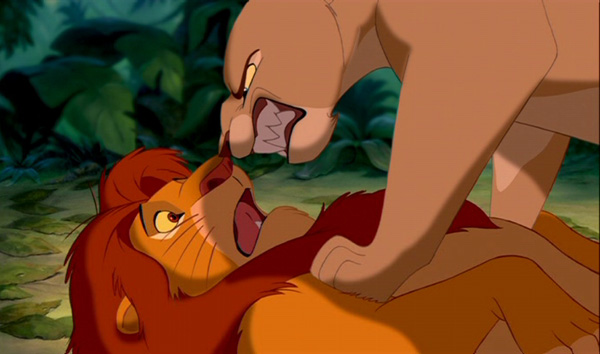 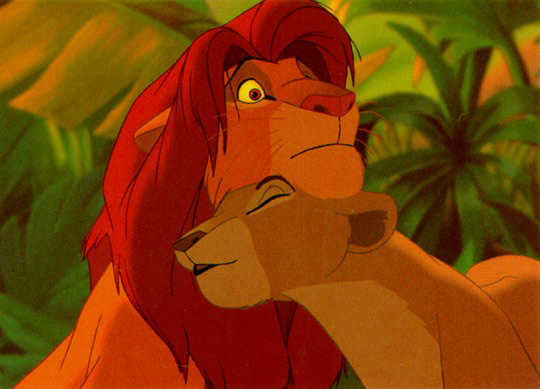 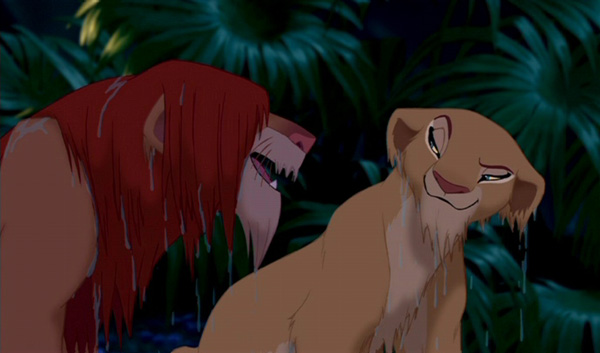 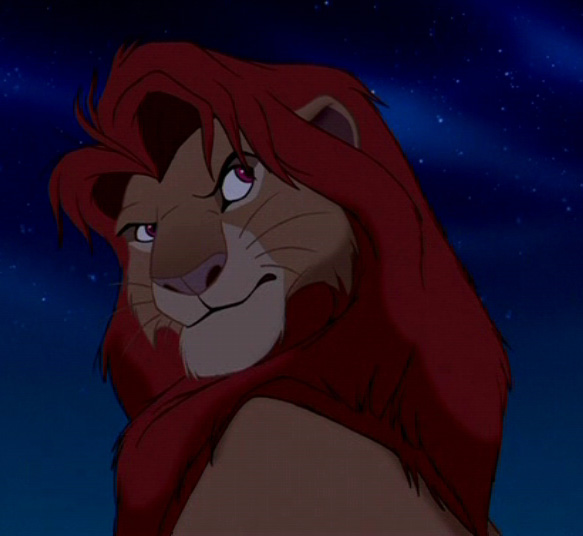 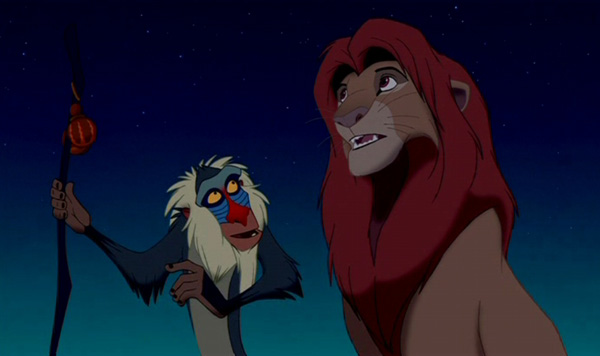 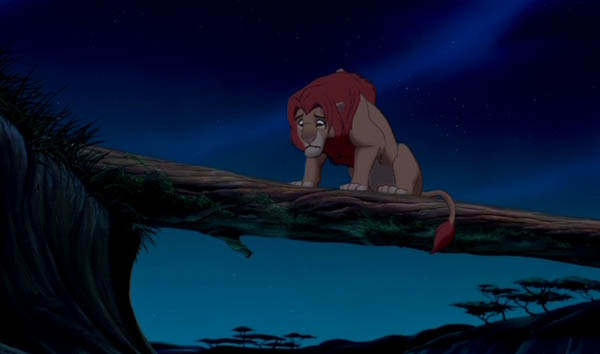 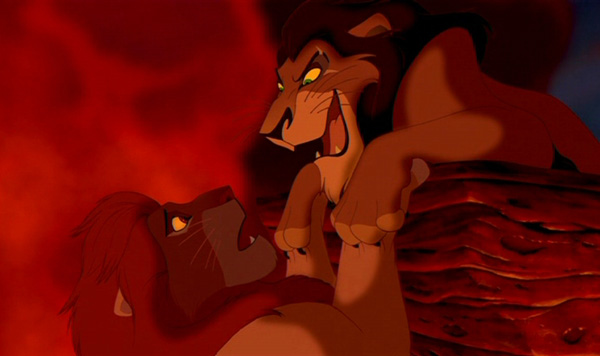 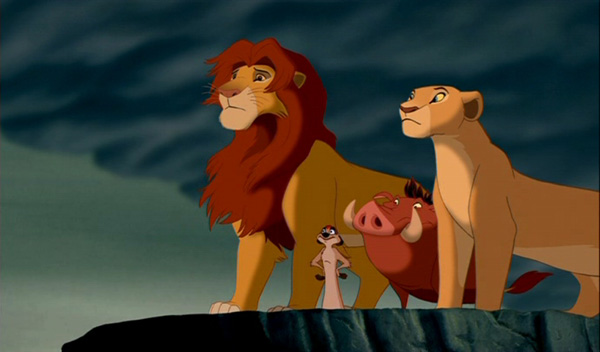 Quotes from the King

Young Simba: Hey, Uncle Scar. Guess what?
Scar: I despise guessing games.
Young Simba: I'm going to be King of Pride Rock.
Scar: Oh Goodie.
Young Simba: My dad just showed me the whole kingdom. And I'm gonna rule it all. Heheh.
Scar: Yes, well forgive me for not leaping for joy. Bad back, you know.
Young Simba: Hey Uncle Scar, when I'm King, what'll that make you?
Scar: A monkey's uncle.
Young Simba: You're so weird.
Scar: You have no idea.

Timon: We're gonna fight your uncle... for this?
Adult Simba: Yes, Timon. This is my home.
Timon: Whoa. Talk about your fixer-upper.

Nala: What's happened to you? You're not the Simba I remember.
Adult Simba: You're right, I'm not. Now are you satisfied?
Nala: No, just disappointed.
Adult Simba: You know you're starting to sound like my father.
Nala: Good. At least one of us is.

Zazu: Oh, just look at you two. Little seeds of romance blossoming in the savannah. Your parents will be thrilled what with your being betrothed and all.
Young Simba: Be-what?
Zazu: Betrothed. Intended. Affianced.
Young Nala: Meaning...?
Zazu: One day, you two are going to be married.
Young Simba: Yuck.
Young Nala: Ewww.
Young Simba: I can't marry her. She's my friend.
Young Nala: Yeah. It'd be too weird.
Zazu: Well, sorry to burst your bubble, but you two turtle-doves have no choice. It's a tradition that goes back generations.
Young Simba: Well, when I'm king, that'll be the first thing to go.
Zazu: Not so long as I'm around.
Young Simba: Well, in that case, you're fired.
Zazu: Hmmm... Nice try, but only the king can do that.
Young Nala: Well, he's the future king.
Young Simba: Yeah. So you have to do what I tell you.
Zazu: Not yet I don't. And with an attitude like that, I'm afraid you're shaping up to be a pretty pathetic king indeed.
Young Simba: Hmph. Not the way I see it.

Adult Simba: I know what I have to do. But going back will mean facing my past. I've been running from it for so long. (Rafiki hits Simba on the head with his stick) Oww! Geez... What was that for?
Rafiki: It doesn't matter, it's in the past.
Adult Simba: Yeah, but it still hurts.
Rafiki: Oh yes, the past can hurt. But the way I see it, you can either run from it, or learn from it. (swings his stick at Simba again who ducks out of the way) Ha. You See? So what are you going to do?
Adult Simba: First, I'm gonna take your stick.
(Simba snatches Rafiki's stick and throws it and Rafiki runs to grab it)
Rafiki: No, not the stick. Hey, where you going?
Adult Simba: I'm going back.
Rafiki: Good! Go on! Get out of here!

Pumbaa: What'd ya do, Kid?
Young Simba: Something terrible. But I don't wanna talk about it.
Timon: Good. We don't wanna hear about it.

Young Simba: I'm so hungry I could eat a whole zebra.
Timon: Ah-ha, we're fresh out of zebra.
Young Simba: Any antelope?
Timon: Nah-ah.
Young Simba: Hippo?
Timon: Nope. Listen kid, if you're going to live here you gotta have to eat like us.

Adult Simba: [yells at the sky] You said you'd always be there! But you're not... and it's because of me.

(Rafiki is singing in Swahili)
Rafiki: Hey, I know who you are and come here, it's a secret. (singing in Simba's ear) Asante sana squash banana we we nu nu me me apana!
Adult Simba: Stop that! What does that mean anyway?
Rafiki: It means YOU'RE a baboon... and I'm not.
Adult Simba: I think you're a little confused...
Rafiki: WRONG! I'm not the one who's confused. YOU don't even know who you are.
Adult Simba: (sarcastically) And I suppose you know
Rafiki: You're Mufasa's boy.
(shocked silence)
Rafiki: Bye!

Adult Simba: Give me one good reason why I shouldn't rip you apart.
Scar: Oh, Simba, you must understand. The pressures of ruling a kingdom...
Adult Simba: Are no longer yours. Step down, Scar.

Vote for Simba as your favorite hero here!

Had enough of the king of the lions? Check out the links page, or head back to the Heroes homepage.