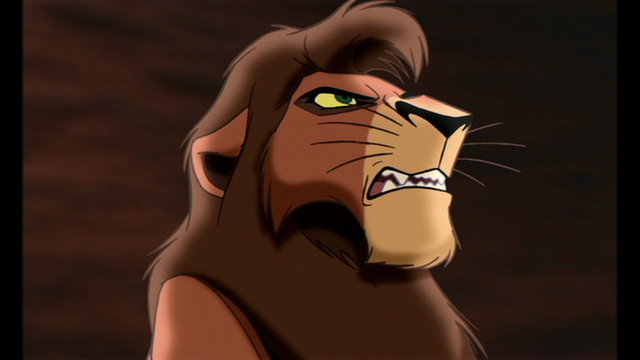 I was so afraid, Now I realize
Love is never wrong, and so it never dies
There's a perfect world shining in your eyes
And if only they could feel it too,
The happiness I feel with you...

Love Will Find A Way
Composer(s)

Kovu is sort of the dark horse of this lont list of heroes, the black sheep of the family. Part of a rebel group of lions called the Outlanders, and hand-picked as a cub to follow in the devious Scar's pawprints, he's been raised and trained by his mother, Zira, and taught that Simba is his mortal enemy, and that Kovu's destiny is to kill him and take his "rightful" place as King of the Pridelands. When a young Kovu has an unplanned run-in with Simba's daughter, the free-spirited and independent Kiara, the two cubs are friends almost right away, not unlike Simba and Nala were in their younger days, making Kovu momentarily forgetting his tough upbringing. Zira and Simba catch the cubs playing and rip them from each other, chastising them for fraternizing with the enemy. As Kovu grows up, his brother and sister, Nuka and Vitani, aid in Zira's plans for the future coup of the throne. Kovu, now grown-up, is fully trained to destroy Simba, and is sent on his mission. When the now grown Kiara is sent on her first hunt alone, Nuka and Vitani stage a savannah fire, creating an opportunity for Kovu to step in. Surrounded, Kiara collapses with the smoke, and Kovu saves her, bringing her to safety, and to her home. He appears to Simba and Nala, putting on an act, saying he's been banished by the Outlanders, and asking not to be judged based on Scar's past, but to be welcomed into Simba's pride. Against his better judgment, mostly because he believes Kovu saved Kiara, Simba agrees, and holds his judgment until he's able to make a wise decision. He keeps Kovu at a distance from th pride, and suggests Kiara stays away. She hasn't forgotten the connection she and Kovu shared as cubs, however, and when Kovu insults Kiara's hunting skills, she calls his bluff by accepting him half-made offer to teach her some of his tricks. They spend time together, and in the process, Kovu learns a new method of "training", never used by Zira, called fun. He and Kiara spend time with Timon and Pumbaa, and Kovu's heart starts to melt and his tense, brainwashed mind starts to relax. He finds himself, against everything he's been taught, falling in love with the princess, and when Rafiki confirms that they must be in Upendi, he's sure he's in love. Kovu begins to understand that Scar and his rebel pride may be the ones who are wrong. Simba, having warmed to Kovu, invites him into the cave to stay the night with the rest of the pride. Vitani, watching, sees this as a perfect opportunity for Kovu to kill Simba and fulfill his training, but when he docilely follows Simba into the cave, Vitani runs to Zira to report that Kovu has failed. Zira and her lionesses stage a fight with Simba, in an attempt to reveal Kovu as a traitor, killing Zira's screw-up son, Nuka in the process. When Kovu doesn't help, Simba is sure of his deceitful nature. Zira and the others, including Kovu, vanish, returning to the Outlands to recouperate and plan their next move. Zira slashes Kovu across the face, giving him an ominously-placed scar over his eye. She severely chastises Kovu, claiming he's responsible for his brother's death, and demanding that he proceed with his training. Kovu refuses, saying that Simba and his pride have done nothing to deserve such animosity and revenge, and runs from his mother and her pride.

Back at Pride Rock, Kovu appears, asking for mercy, and Simba passes his judgment, banishing him from Pride Rock. Kiara, furious at her father's insensetivity and short-sightedness, runs after him. They profess their love for each other and decide the only way to stop the warring prides is to take a stand. They arrive just in time to see Zira and Simba leading their prides in a battle royale. The step in between their parents, and convince them that the Pridelanders and the Outlanders aren't that different, there's just a rift between them based on misunderstanding and prejudice. Some of Zira's pride agree and change sides, but Zira, insane with jealousy and rage, vows to kill all who stand against her. In the battle, she's flung over a cliff. Clinging desparately to the craggy wall, Kiara reaches down to save her, but she falls to her death in a raging river miles below. Kovu is forgiven and welcomes into the pride, and the new royal family roar for their subjects.

Kovu finds himself falling, against his will and training, for the feisty princess Kiara, daughter of his sworn enemy. Kovu's vicious traning by his mother Zira makes himself his greatest nemesis as he finds himself falling for Kiara and leaning toward the side of the Pridelanders, but the true villain is his mother, Zira, who desires Kovu to follow in Scar's pawprints and become the king of the Pridelands. She disregards her other children, focusing all her attention on Scar's hand-chosen heir and programming him to kill Simba. My thoughts?

This is one of the much nicer Disney sequels (see my theory on sequels), and has a lot of interesting themes, not least of all being the ability to choose and fight the programming and indoctrination that might fall upon you. This sequel is Romeo & Juliet to The Lion King's Hamlet, two lovers from opposite sides meeting and falling in love despite the odds. The animation in this is relatively superb, and the music and new characters are engaging. It's charming, has its minor flaws, but is also touching and quite funny. Timon and Pumbaa have never been funnier (except maybe in The Lion King 1 1/2. Kovu is a great conflicted character, and is a great example of the innate goodness in everyone. 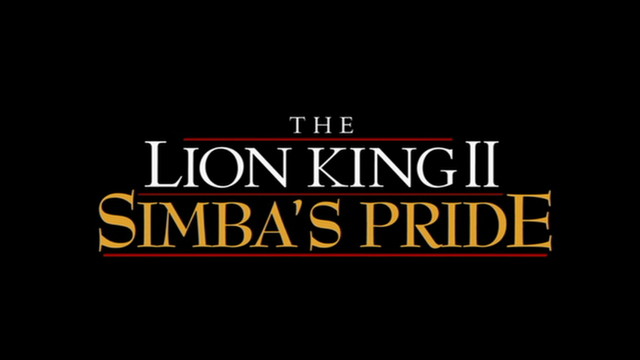 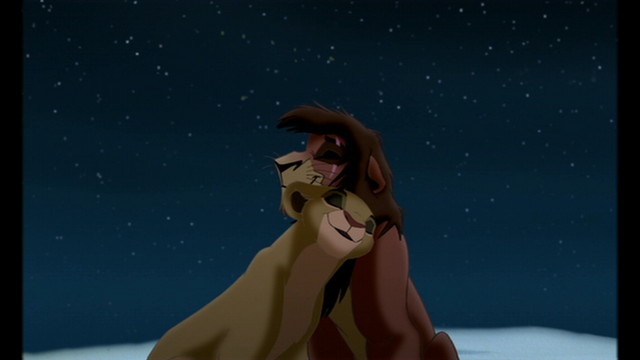 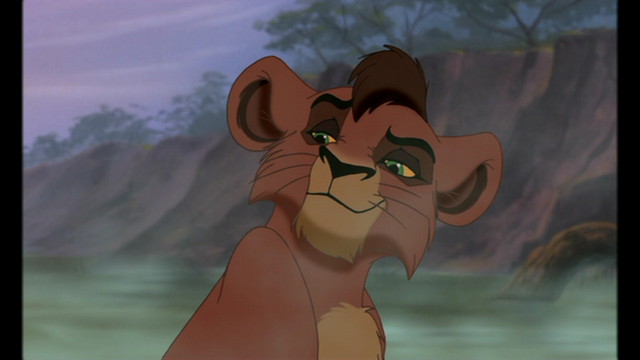 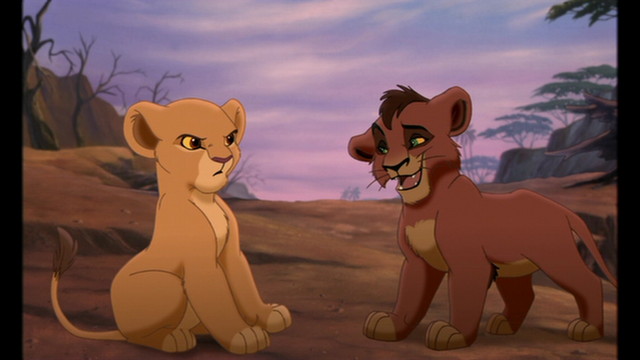 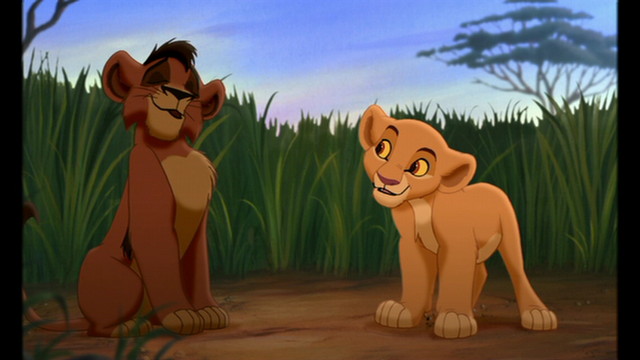 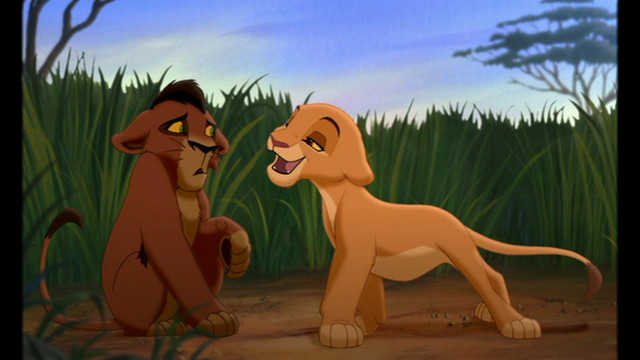 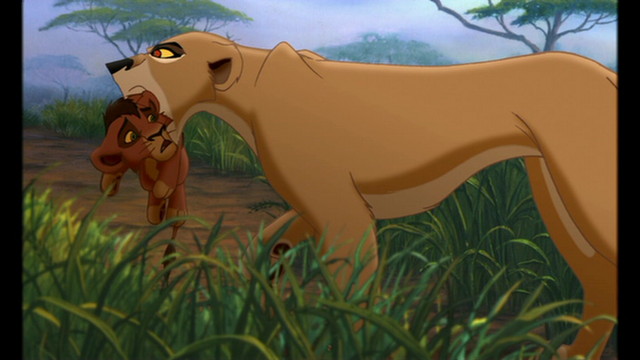 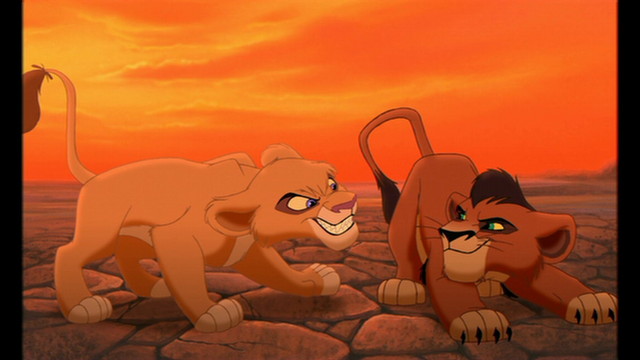 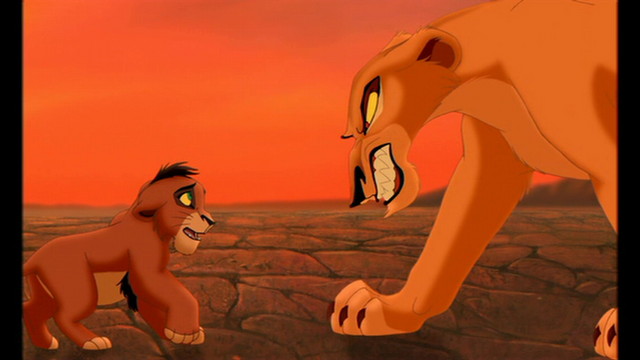 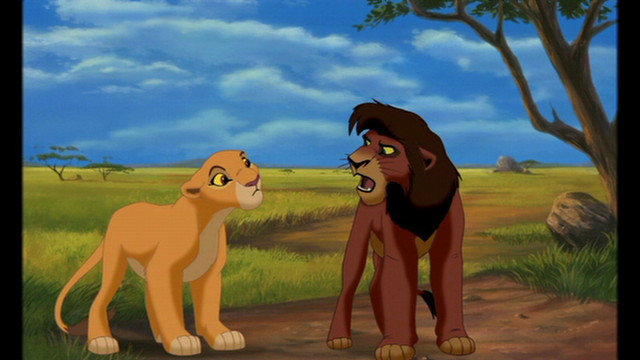 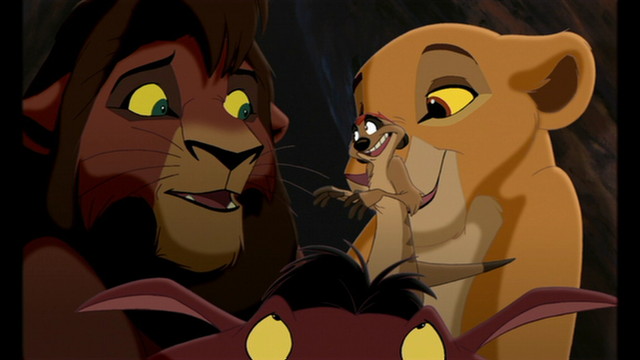 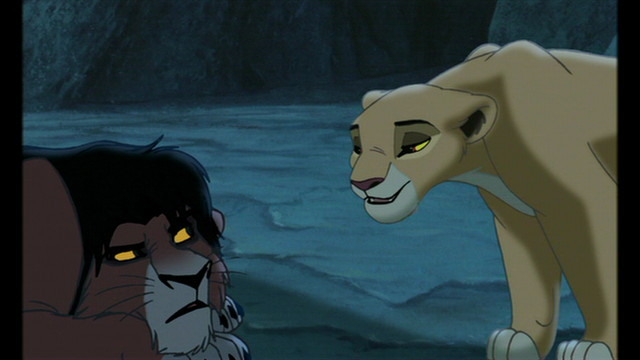 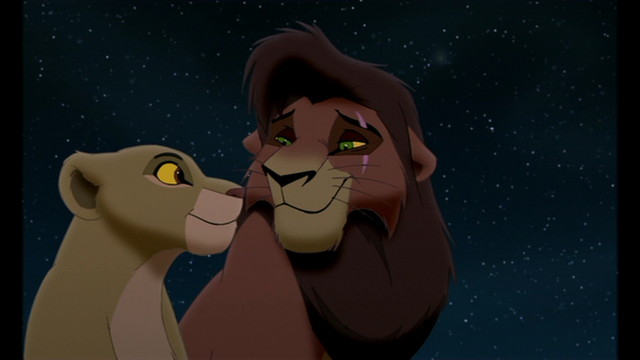 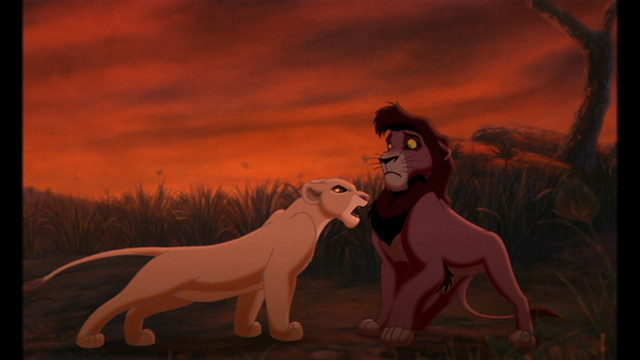 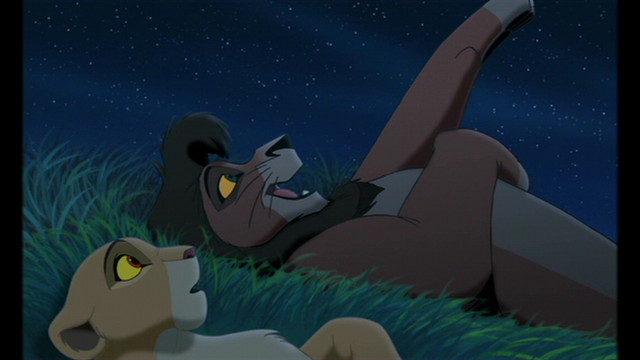 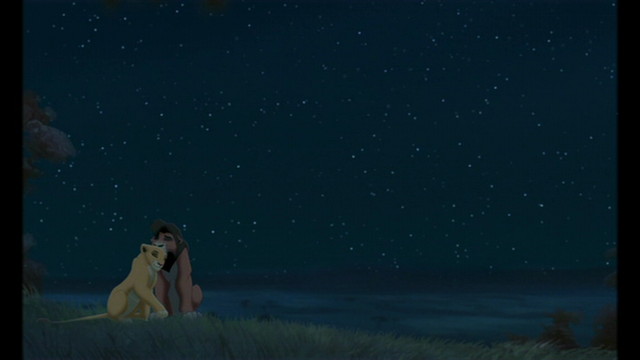 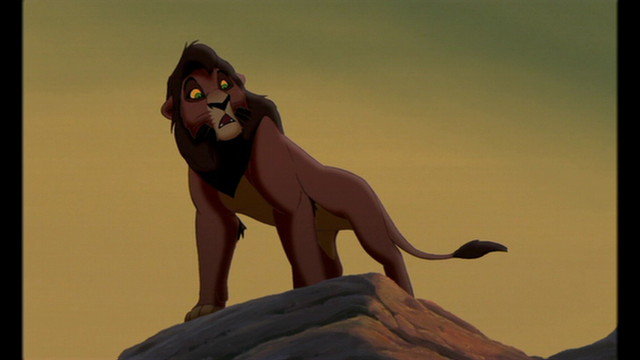 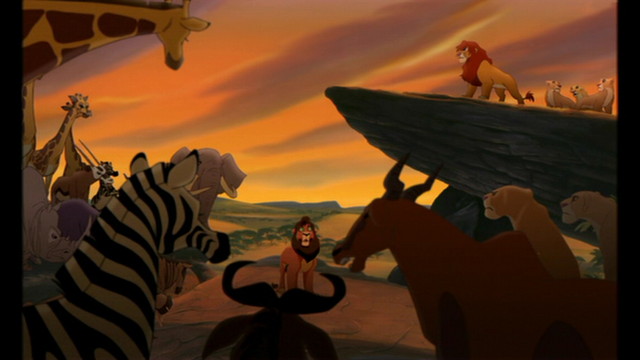 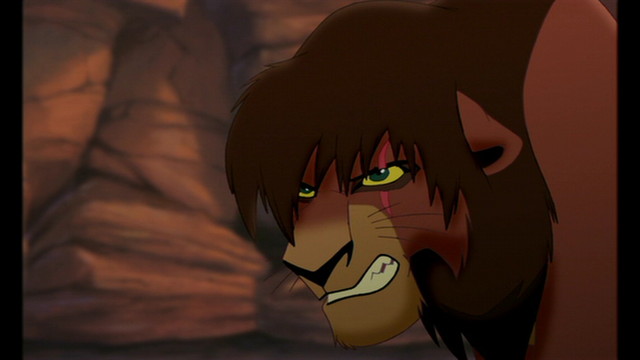 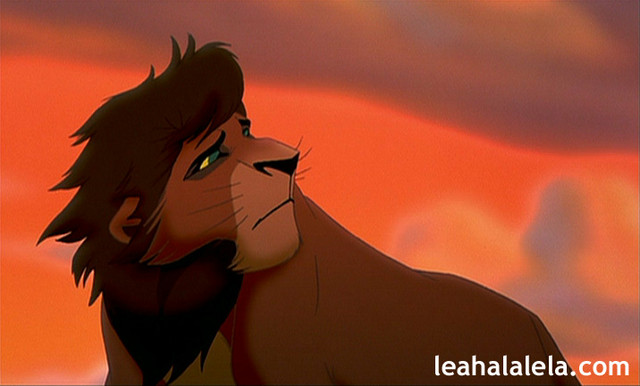 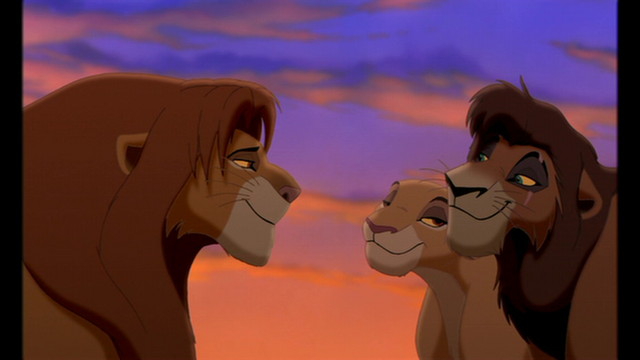 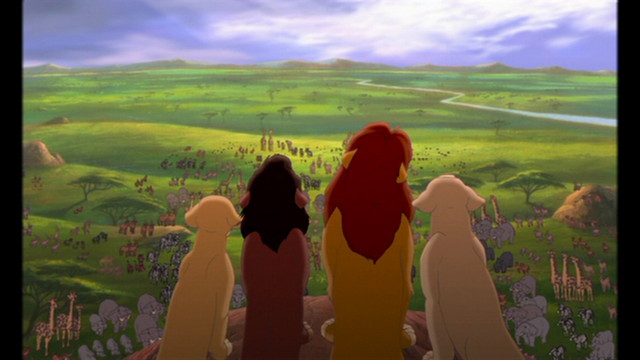 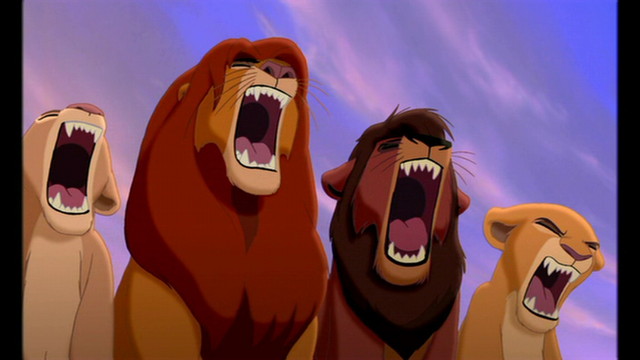 Kovu: I humbly ask to join your Pride.
Simba: No! You were banished, along with the outsiders.
Kovu: I have left the outsiders. I'm a rogue, judge me now, for who I am. Or am I to be blamed for a crime I didn't commit?

Zira: What is your destiny?
Kovu: I will avenge Scar. Take his place in the Pride Lands.
Zira: Yes! What have I taught you?
Kovu: Simba is the enemy.
Zira: And WHAT... MUST... YOU DO?
Kovu: I must KILL him!

(Kiara and Kovu are running with Timon and Pumbaa)
Kovu: Why are we doing this? What's the point of this training?
Kiara: Training? This is just for fun!
Kovu: Fun?
Timon: Yeesh! You need to get out more. Fun! Yee-ha!

(Kiara and Kovu are stargazing)
Kiara: That one looks like a cute bunny. See the fluffy tail?
Kovu: Yeah. Hey! That one looks like two lions killing each other for a scrap of meat! Ah, I've never done this before!
Kovu: I've never played this before.
Kiara: Really? My father and I used to do this all the time. He says all the great kings of the past are up there.
Kovu: You think Scar's up there? (Shocked, Kiara doesn't answer) He wasn't my father, but he was still part of me.
Kiara: My father said there was a darkness in Scar that he couldn't escape.
Kovu: Maybe there's a darkness in me too.

Vote for Kovu as your favorite hero here!

There are a few Kovu websites listed in the Links page or head back to the Heroes homepage.