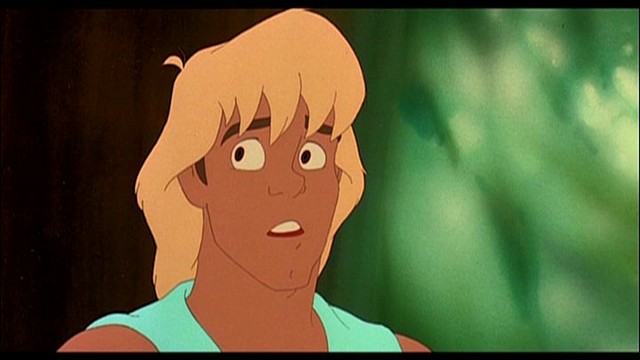 Zak Young is the hero of FernGully: The Last Rainforest (1992).

FernGully tells the story of a young and impetuous fairy named Crysta. Fascinated by humans, she often goes above the canopy of the rainforest in case there's any sign of them in nearby areas, much to the dismay of her father and the local mystic, Magi Lune (story sound familiar?...). When Crysta stumbles on an actual human in the rainforest, and he, unable to see the fairy for what she is, tries to spray her with his spray paint, she accidentally shrinks him to fairy size. She tries to explain that she meant to give him fairy SIGHT, but she's inexperienced with her powers, and she says she'll take him to see Magi so she can change him back. He introduces himself as Zak, and his laidback, California attitude immediately intrigues the fairy, and as they learn more about each other, and she introduces him to the unseen world of the fairies, Zak realizes what an amazing world they live in. They spend a lot of time together, and Zak and Crysta begin to develop feelings for each other, much to the chagrin of her man, Pips. When Crysta helps Zak understand how all living things have feeling, he realizes with a jolt that he had been working to destroy the rainforest, without giving a thought to the creatures and plants that thrived there. When Hexxus, the very embodiment of toxic pollution, takes over the operation, FernGully is further threatened. Zak helps how he can, but ultimately, it's the magic of the rainforest that is able to save Crysta and her fairy friends. Crysta finds the magic in herself to plant the seed that takes over the tree-eating Levellor, and the toxic fumes that power it, destroying Hexxus for good. She returns Zak to his proper size, and he heads off with his co-workers, explaining that things have gotta change...

Zak is voiced by Jonathan Ward.

Zak has a momentary fling with the impulsive, sweet, environmentalist fairy, Crysta. Zak has a minor threat in Pips, Crysta's boyfriend, but in the end, shares the same threat as that of the fairies in Hexxus, the embodiment of toxic pollution. Okay, so how do I feel about the film?

First of all, setting aside the fact that animators (notorious for excessive use and waste of paper) made an animated film with an extremely environmentalist message, and setting aside the overt message of this film, I actually like it. It can be seen as somewhat heavy-handed, but taken as a fairy tale, a love story, and an adventure, it really works. Zak's character is sort of dated, but it works in the context, and his street-smarts are an interesting contrast to Crysta's naivete (although, in a way, she understands things on a much deeper level than he does). Zak grows into a likeable and believable hero, and ultimately has a change of heart as to what's really important. The film has some pretty fun music from the now-archaic children's artist, Raffi, and features Robin Williams as yet another comic-relief sidekick in an animated film. Artistically, it's a really nice piece, and features some really nice characters and animation, especially as regards the details of the environment (no pun intended...) and the characters therein. It's a good little piece of 90s animation. 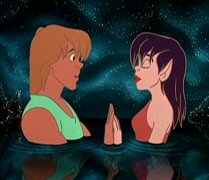 Some images of Zak 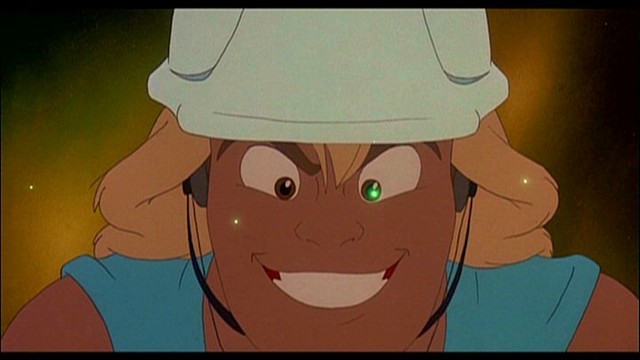 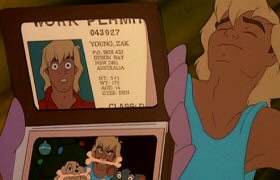 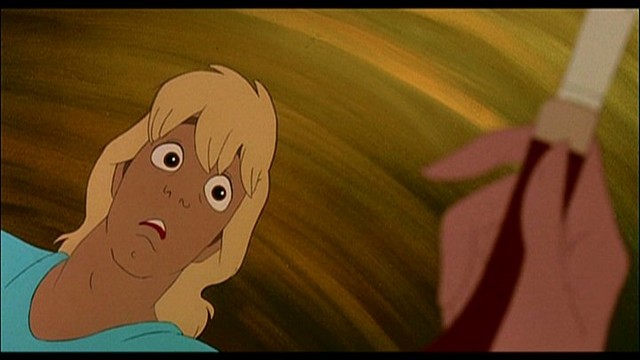 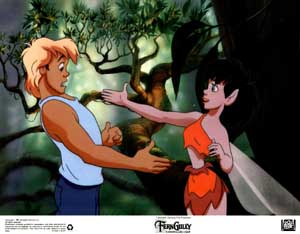 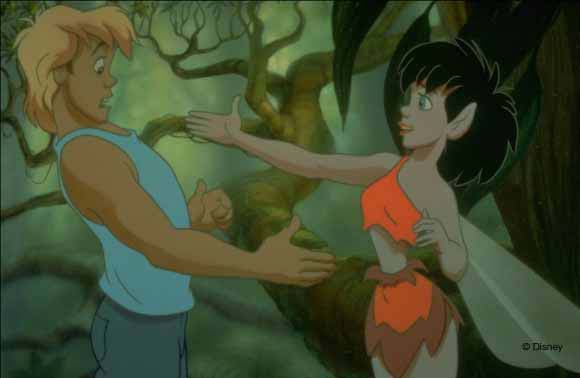 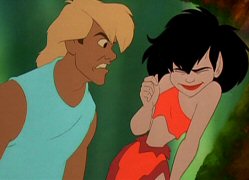 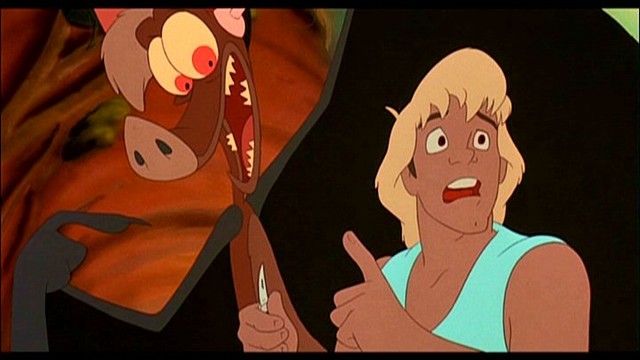 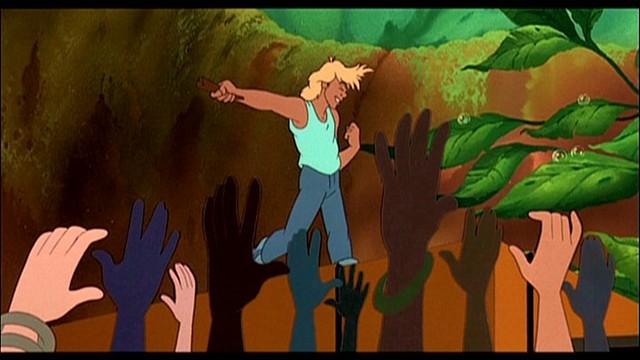 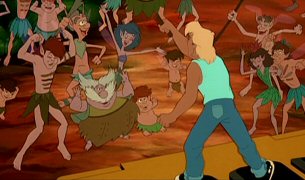 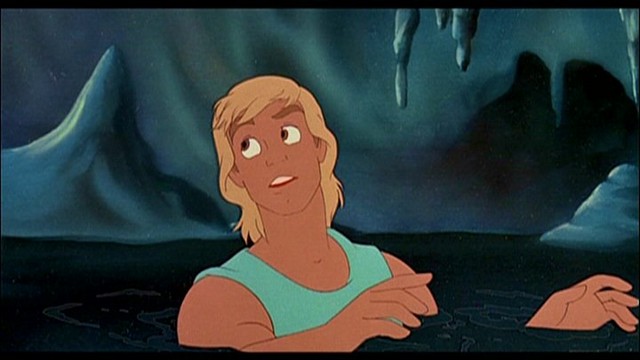 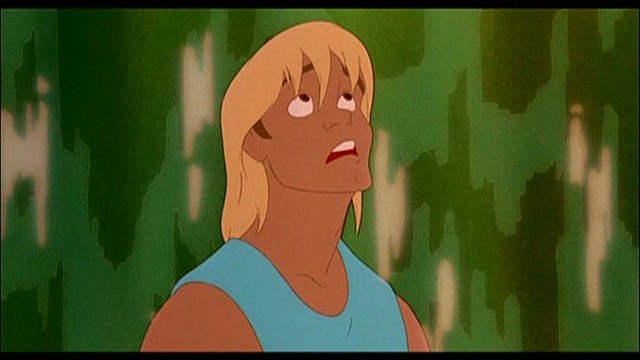 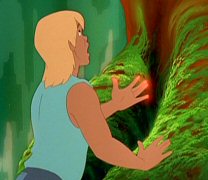 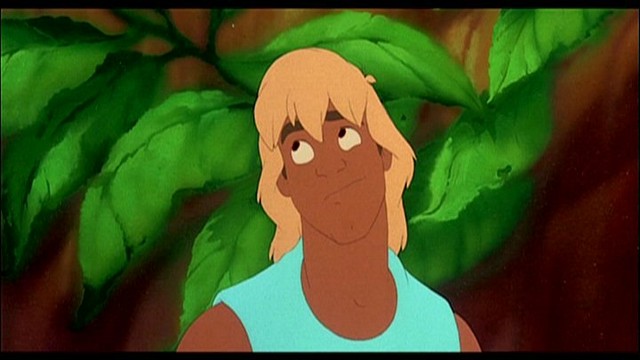 Zak: What happened to me? I'm... I'm three inches tall!
Crysta: I shrank you.
Zak: You what?
Crysta: I was the most amazing thing. Course it's not what the spell was supposed to do, but Magi Lune can change you back to normal.
Zak: You... you shrank me?
Crysta: Yeah.
Batty Koda: Catches on quick, doesn't he?

Zak: I'm not buzzing off any where. Now unshrink me, and I mean now.
Crysta: Well, I guess I could take a bash at it.
Zak: "Take a bash"?
Crysta: I'm only just learning.
Zak: Great, I've been shrunk by an amateur. I don't believe this. Okay, bash away.

Batty Koda: Nobody cares about me.
Zak: I care about you, bat man.
Batty Koda: Really?
Zak: Positive.
Batty Koda: Only fools are positive.
Zak: Are you sure?
Batty Koda: I'm positive... I fell for it! I should have known!

Crysta: But how can you live without trees?
Zak: Easy.
Crysta: But trees give life. They make the clouds, the water, the air.
Zak: We have air.
Batty Koda: Yeah, if you don't mind getting all your minerals in one breath.

Zak: What are you, some kind of fairy?
Crysta: Of course. What about you? Are you really a human?
Zak: Last time I checked.

Zak: What about you, Crysta? What is it that fairies do?
Crysta: Do?
Zak: Yeah, what's your job?
Crysta: What's a job?
Zak: Guess that answers that question. Look, what do you do all day?
Crysta: Help things grow.
Zak: Really? That sounds cool.
Crysta: No, usually it's warm.
Zak: No, cool means it's hot.
Crysta: What?
Zak: You know - bodacious, bad, tubular...
Batty Koda: Awesome use of the language, dude.
Zak: As in, you are one bodacious babe.
Crysta: And that's good... I mean, cool?
Zak: That's right! We're communicating.

Vote for Zak as your favorite hero here!

MUCH thanks to Annie from Clear Black Lines for the excellent screen grabs! See the links section for FernGully links. Or, go back home.