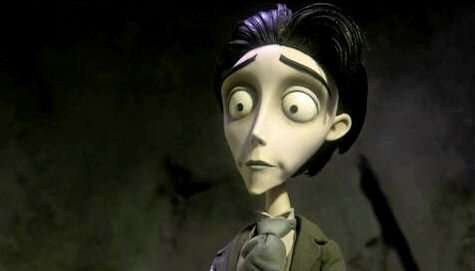 Warning: MAJOR PLOT SPOILERS AHEAD. If you haven't seen this film yet, or don't want to have the plot spoiled, read no furhter! Thank you.

Victor is an artist and a musician, a sort of hobby botanist, and an accomplished pianist. The son of the nouveau riche Van Dort family (whose recent fortune has been acquired in the fish market), Victor finds himself as half a party of an arranged marriage, to Victoria Everglot, the sweet but repressed daughter of Maudeline and Finis Everglot, a high-society (but low on cash) family. The Everglots are less than thrilled that their daughter is going to be married to a low-born boy with hardly any societal standing, but their finances require that an advantageous union be made in regards to their daughter for their way of living to be sustained. William and Nell Van Dorts are thrilled that Victor is marrying into what they think is a wealthy and high-class family, with a large mansion and impressive servants. The kids, meanwhile, innocent and sweet as they are, are mostly concerned with whether or not they'll like the person they barely know, who they will soon wed. When Victor plays the piano in the Everglots' entryway, the sad and beautiful melody reaches Victoria's ear and she follows it down to him. The two finally meet face to face, and they are pleasantly surprised to find they are a perfect match and even feel some chemistry between them. They are whisked unceremoniously to the wedding rehearsal, where Victor, flummoxed by the winsoem Victoria and the awkward situation they both have found themselves in, and stammers through his vows, never getting them quite right, causing the Everglots and the Preacher to nearly throw up their hands in disgust. When the butler appears at the rehearsal with news of the arrival of Baron Barkis Bittern, a seemingly wealthy and suave lord, he's invited to sit in on the rehearsal, and as a houseguest of the hard-up and avaricious Everglots. Victor's clumsiness and anxiety results in lighting the hem of Maudeline Everglot's dress on fire, and, caught up in the pressure and embarassment, Victor flees.

Victor walks into the woods, frustrated with himself, thinking that he made a fool of himself in front of Victoria, who he feels genuine affection for, and worried that he must have infuriated the Everglots. He practices and practices his vows, imagining the nearby trees and stumps are family and friends at the funeral, and, finally, recites the words and actions perfectly, using a nearby tree branch to place the wedding ring on, in place of Victoria's finger. Satisfied with his perfect execution, he has no idea what he's just done. Lightning strikes and the branch on which he just put the wedding ring reaches out and grabs his arm, pulling him into the ground. He pulls himself out, and finds attached with a death grip on his arm, a skeletonic hand and forearm. He screams and throws it to the ground, but watches with horror as the body to which the arm belongs rises from the ground, revealing a beautiful, but gaunt and rotting Corpse Bride, who opens her mouth to say, "I do." Victor, terrified, rises and runs from the forest, only to find the Corpse Bride immediately behind him wherever he goes. She corners him and closes in, saying, "You may kiss... the bride..." She kisses him and all is blackness.

The Everglots and Van Dorts, worried about Victor's disappearance, and hearing from the town crier that he had been seen in the arms of another woman, worry about the wedding the following morning. Baron Barkis manipulates them into believing he's the right one for Victoria to marry, and they prepare the girl for the upcoming wedding, regardless of who the groom is.

Victor wakes up in the land of the dead, with the Corpse Bride at his side, and terrified, he demands answers. The lounge singer Bonejangles and his band tell the story of the Corpse Bride in a lavish and extravagant musical number, in which Victor learns that she was engaged to a man, against the wishes of her parents, and when the two eloped, the groom-to-be stole her riches and left her for dead, and she was indeed murdered, still in her mother's old wedding gown. She vowed, after she had died, that she would wait in the ground until her true love came along and married her, which, unknowingly, Victor had done by reciting his vows and placing his ring on her finger. Victor, moved by her plight, but still sure he belongs with Victoria, in the land of the living, asks the Corpse Bride (who he learns is named Emily) if they can go "upstairs", on the pretense of introducing her to his parents. When they reach the top, Victor asks Emily to wait in the forest so he can prepare his parents to meet their new daughter-in-law. He instead goes to Victoria, and begs for her help, when without warning, Emily appears on the balcony, and furious at Victor's seeming infidelity and she grabs him and takes him back down to the land of the dead. Victoria runs to the priest, asking him how to save someone who's been taken by the dead, and he returns her to her parents, insisting she must be locked up. Her parents inform Baron Barkis that, as Victor has still not returned, he is to be the groom in the morning.

Victor tries to explain to Emily that they can't be together, and, as Emily begins to realize that SHE'S the "other woman", and Victoria isn't, she starts to second-guess her ideas about her and Victor. She's in love, but she realizes that there's more than just her to consider. Victor, meanwhile, starts to see the charm and beauty of the poor, lovely bride, and that they share common interests (including the piano, on which they share a touching duet). When his family's servant dies of a terrible cough and appears down below, Victor is surprised, but even more surprised when he hears that Victoria is already paired with a new groom. Victor overhears Emily being told that their vows are moot unless Victor makes the ultimate sacrifice and takes a poisonous potion that will allow them to truly be married and be together forever, in the land of the dead. Victor, believing nothing awaits him above, agrees to the plan.

The Dead prepare for the wedding they've been waiting for, while the Living prepare for the wedding Victoria can't bear the thought of. Barkis is revealed as a money-grubbing con-man, with little regard even for Victoria's life, and the two are married. The Dead take their celebration and ceremony Upstairs, and at first incite panic in the town, and at the Everglot-Bittern wedding dinner. Pandemonium breaks out, and Barkis's intentions are revealed, and dashed when Victoria also reveals that the Everglot estate is destitute and she has no daori to offer him. He vanishes, and before long, the Living realize the visiting Dead are their loved ones who have passed on. Many of them join the Dead as they head to cathedral, where Victor and Emily are to be wed. The ceremony, nearly complete, is interrupted when Emily, noticing a devastated Victoria, stops Victor from drinking the poison. She won't allow him to sacrifice himself for her, when Victoria and he seem to be made for each other. She cancels the ceremony herself, when suddenly, Barkis bursts through the church door. He threatens Victor and Victoria, claiming that she is still his wife after all, and he and Victor engage in a swordfight (more like a sword/roasting fork fight), in which Emily realizes that he is the groom that robbed her and left her for dead. Furious, she stands in the way of his sword when he tries to stab Victor, and orders him to leave. He does, but not before cruelly toasting to Emily, and drinking the poisonous potion. As he chokes and dies, he suddenly finds himself at the mercy of the Dead, being one of them. As such, Victoria is freed from their union, a young widow, and free to marry Victor.

Victor tries to tell Emily he has to keep his promise, but she assures him he already has. He was willing to make the ultimate sacrifice for her, so she is ready to do the same for him. She takes the ring off her finger and places it in his hand, and finding herself free of the curse that plagued and haunted her since her murder, her spirit is released as a flock of butterflies that fly into the moon, as Victor and Victoria embrace and watch her.

Victor is voiced by the very talented Johnny Depp in his first venture into animation, but definitely not his first project with Tim Burton.

Victor is engaged to the sweet and demure Victoria Everglot, but finds himself accidentally married to the pretty and gaunt Corpse Bride, Emily. Victor's nemesis seems for the most part to be his unintended union with a corpse, but in actuality, the devious and scheming Baron Barkis Bittern proves a serious threat to Victor's very life. My personal thoughts and analysis...

....WOW.... and again, WOW! I saw a matinee of this film on opening day, and I was staggered from start to finish. It's like Tim Burton opened his wonderfully crazed mind and it all fell beautifully into place. The character design is fresh and interesting, the characters themselves have depth and a sense of realism to them. I related instantly to Victor, and felt his emotional roller-coaster as his insecurities turned to confidence and he made wise and considerate decisions. Emily is beautiful, elegant and unselfish and her emotions felt real (surprising, for a corpse!), and Victoria was the perfect companion for Victor, sweet and confident to balance his awkwardness and insecurity from the start. Their chemistry is undeniable and innocent, despite their horrid parents. Danny Elfman does it again with the magnificent score (my only gripe is the songs were few and far between... We need more singing!), and the songs are imaginative and lively, with a little operetta, a little lounge jazz, a little classic Elfman. I feel a little jilted that I didn't learn this film was a musical until a couple weeks ago... Did they think that marketing it as a musical would get lower box office results with today's audiences? A shame, if so. The design and colors are incredible, with an interesting twist, making the Upstairs world dark and grim, full of straight lines and gaunt buildings, and morose and somber humanoids, while the Downstairs world is vibrant and colorful, filled with interesting and clever characters. A very interesting take and statement on social ideas about life and death.

All in all, it's a remarkable achievement, this film. While The Nightmare Before Christmas will always be a standard of excellence, and a beautiful film in its own ways, this film ups the ante, improving on the animation (particularly facial and expressions) and making a new and lovely world and characters. 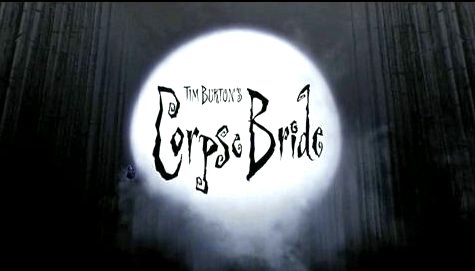 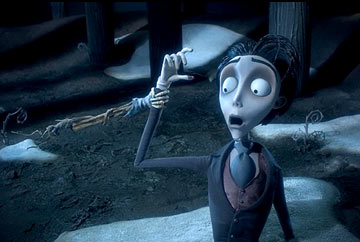 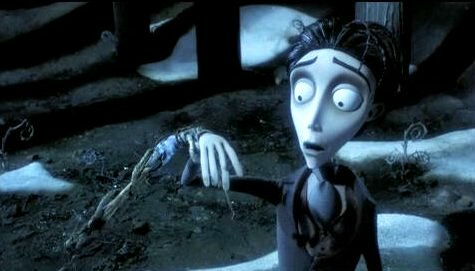 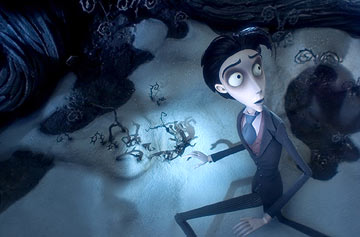 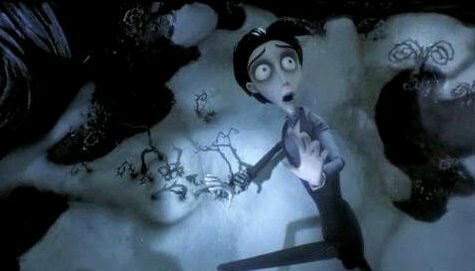 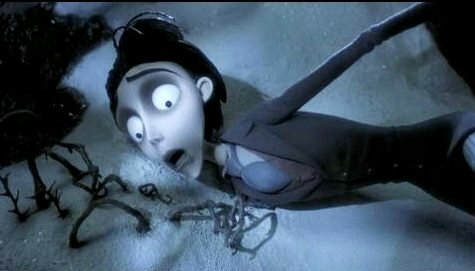 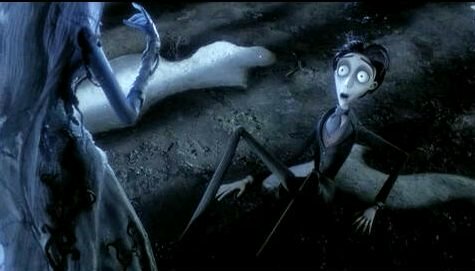 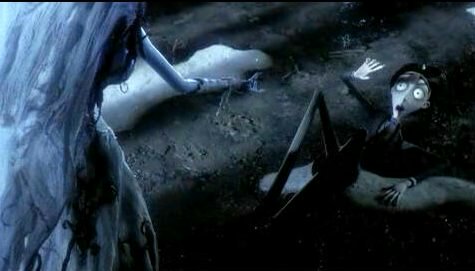 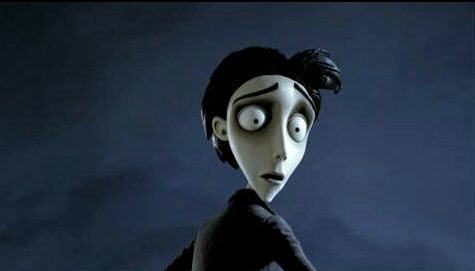 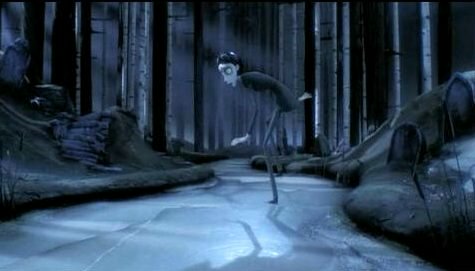 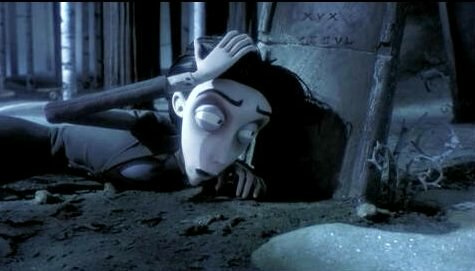 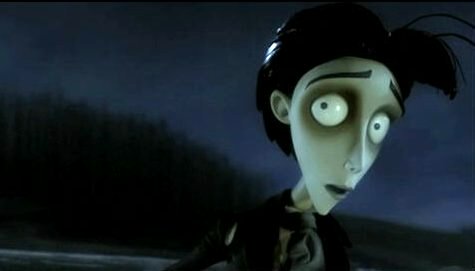 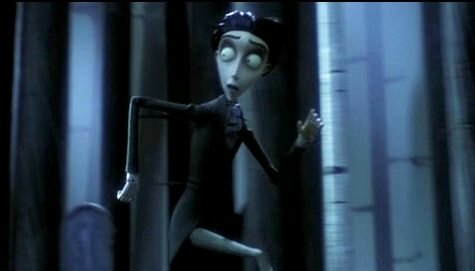 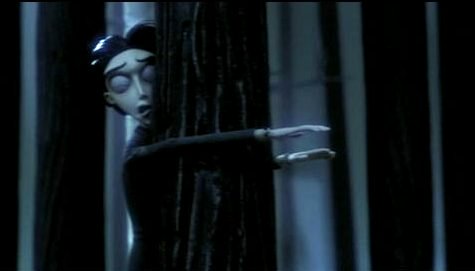 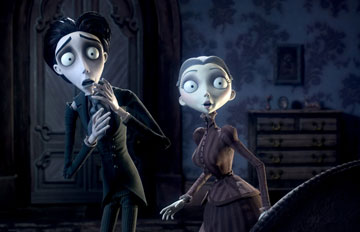 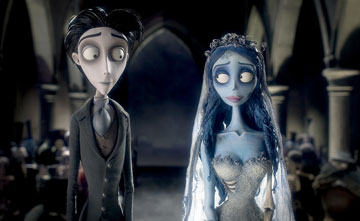 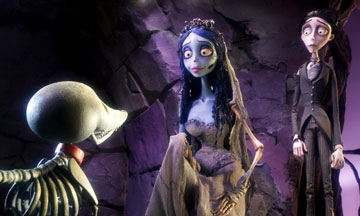 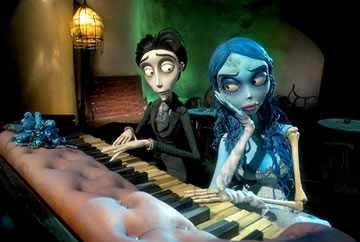 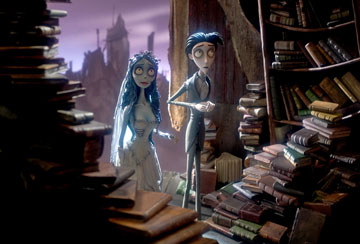 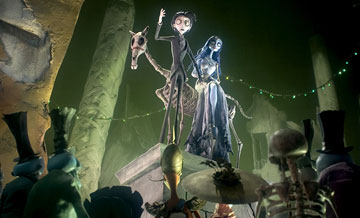 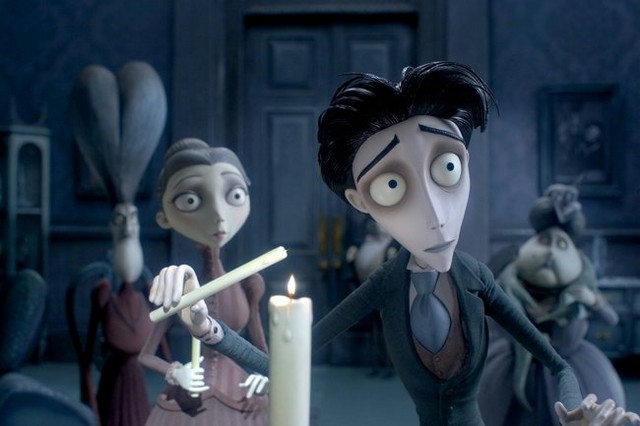 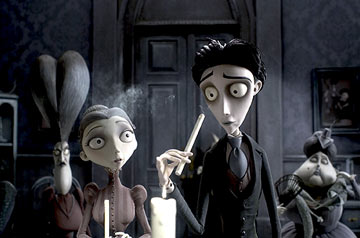 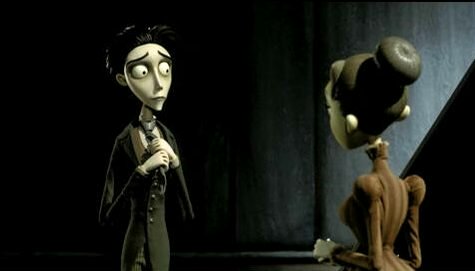 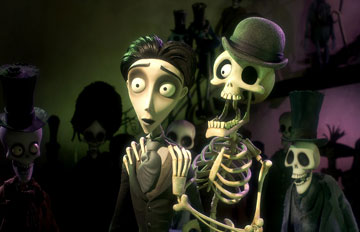 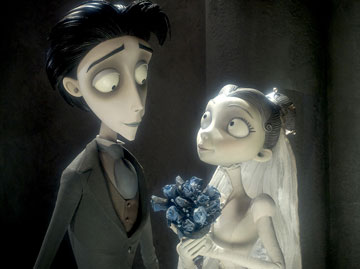 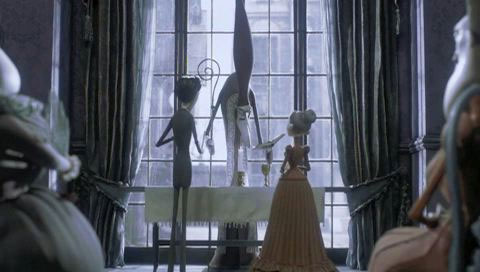 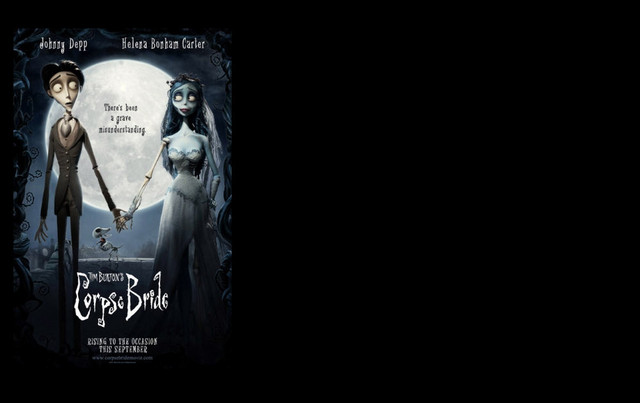 The Corpse Bride: Darling... where are you going?
Victor: HOME!

The Corpse Bride: (about Victor's dog, Scraps) What a cutie!
Victor: You should have seen him with fur.

Vote for Victor as your favorite hero here!