Taran is the unlikely hero from the animated feature, The Black Cauldron (1985).

Based on the second of Lloyd Alexander's Prydain Chronicles, this film revolves around the legend of the Black Cauldron, an ancient relic that can bring to its owner an unbeatable army of the undead. Taran enters the story as a pig-boy, resigned to live as an assistant and self-proclaimed apprentice to Dallben, the owner of a special pig. Taran's particular assignment is the unglamorous one of looking after Hen Wen, who we soon learn is actually an oracular pig. While Taran watches over the pig, Taran dreams of fighting battles and winning glory and adoration from the kingdom one day, but his daydreams are shattered when Hen Wen panics and rushes into Dallben's cottage. She reveals that the Horned King is going to try to kidnap her and use her to find the Black Cauldron, overtaking the entire kingdom. Taran must take Hen Wen to safety, and along the way, they are interrupted by the pesky and mischievous, but endearing creature, Gurgi, who insists on scavenging food off of Taran. Taran rids himself of the furry creature, but is intercepted in his escape, and he watches helplessly as Hen Wen is pignapped and taken to the Horned King's fortress. Taran sneaks into the castle, but is soon caught, and forced by the Horned King himself to instruct Hen Wen to reveal the location of the Black Cauldron. Hen Wen must comply, but stops before revealing the information the Horned King needs. Taran and Hen Wen try to escape, but while Hen Wen is able to get free, Taran is caught and taken to the dungeons. Not destined to stay there for long, however, a stone in the floor opens up and Taran meets the bossy but informative Princess Eilonwy, also a prisoner of the Horned King. Together, they make their way through the dungeons, finding an ancient treasure room, where Taran finds and procures an old and rusty sword. They further go on to find an old, self-important bard named Fflewddr Fflam. They help him escape, and the three of them escape into the dark forest. Gurgi reappears, and joins their quest, determined as they are to destroy the Black Cauldron. They are soon captured by King Eidilleg and his Fairy Folk, but are released when they learn of the travelers' quest, sending along with them a fairy guide. They encounter the Witches of Morva who possess the Cauldron, but the Witches demand a trade. Taran offers his sword, which turns out to be the ancient and powerful sword Dyrnwyn. The Witches agree, but the Cauldron is soon stolen from Taran and taken to the Black Cauldron. The Horned King brings his undead army to life, and prepares to go to war. The only way to undo the magic of the Cauldron is for a willing sacrifice to jump into its swirling depths, and although Taran tries to stop him, Gurgi dives into its black waters. The Horned King's army falls to pieces, and he is defeated. Taran is crushed that Gurgi gave his life for his friends, but miraculously is revived when Taran offers another trade with the Witches: The useless Cauldron for Gurgi's life. The friends walk into the forest, looking forward to a bright and happy future, free from the Horned King's tyranny.

Taran is voiced by Grant Bardsley.

Taran has a love/hate relationship with the feisty but charming and resourecful Princess Eilonwy. The Horned King is a formidable foe for Taran, and nearly achieves his wicked goals. He has a bumbling goblin sidekick called Creeper. How I feel about this oft overlooked little film...

This film, based on the novel by Lloyd Alexander, is by no means perfect, but it does have a lot of interesting and positive elements. Many people haven't even heard of this film, and know very little of its story or characters. Taran starts as a weak character, like many unlikely heroes do, but he develops with the story and soon becomes strong of character and compassionate for his friends. This story is fairly close to the source material, as far as I can remember (although it always seemed odd to me that Disney would make a film of the second book in a series of five, even though in hindsight I realize that it probably stands alone the best), and goes at a pretty good pace. Controversial due not only to its dark and evil subject matter, but also for its departure from the Disney formula and its until-then unprecedented PG rating, this film gets a lot of heat from the fans, but when looked at on its own, it actually stands pretty well. The love story is unconventional, there isn't any singing, and there are some random characters here and there, but it's a fun, exciting, even at times emotional journey, and it's fun to watch the innocent romance between Taran and Eilonwy blossom. It's not Disney's most popular title, but I like it, and I think it deserves a little more credit than it usually gets. 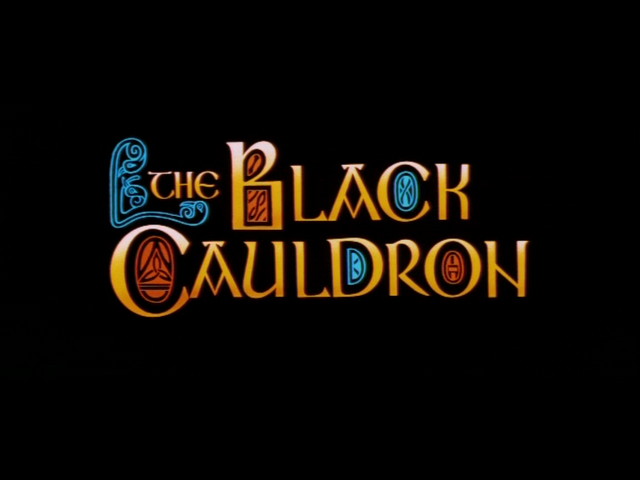 Pictures of Taran and Crew 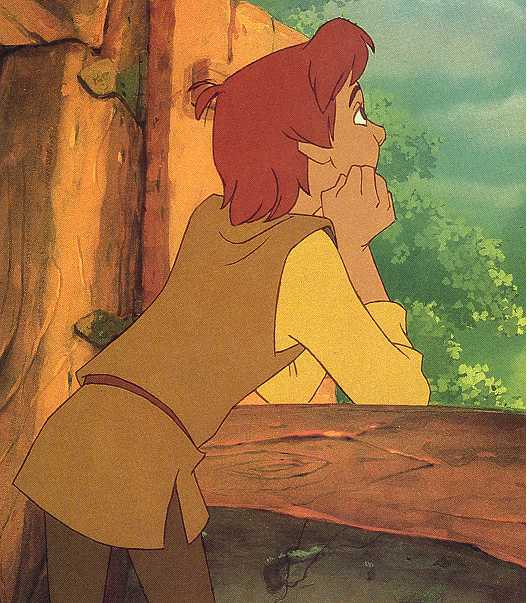 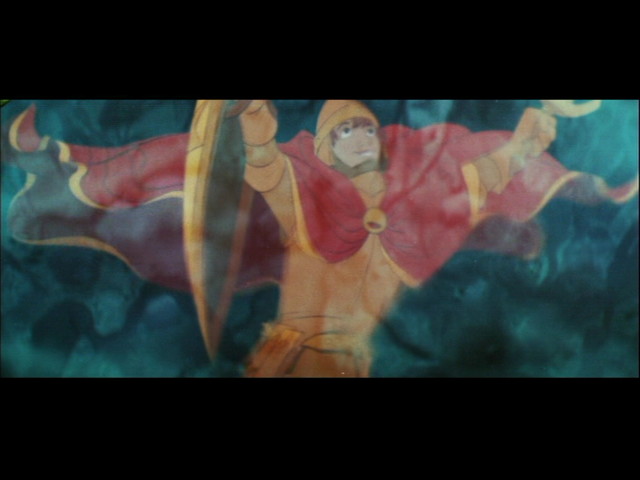 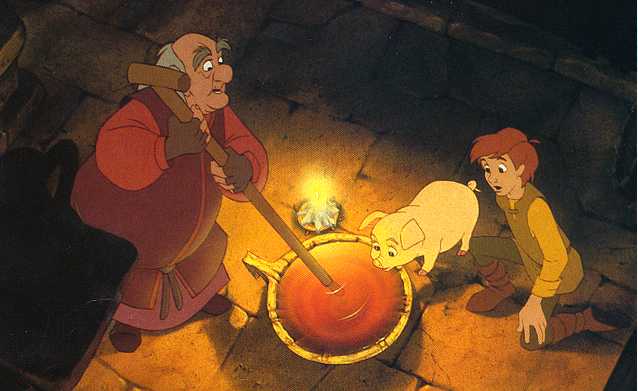 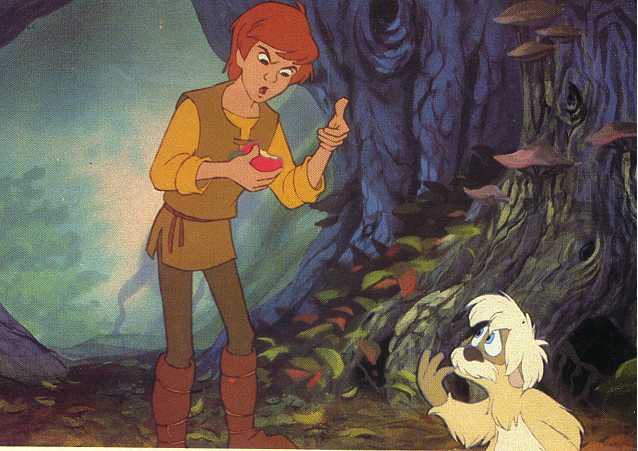 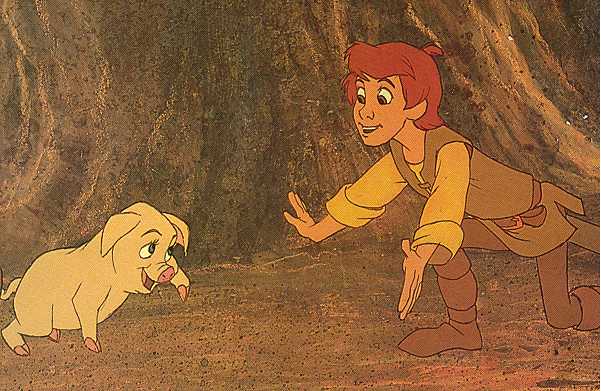 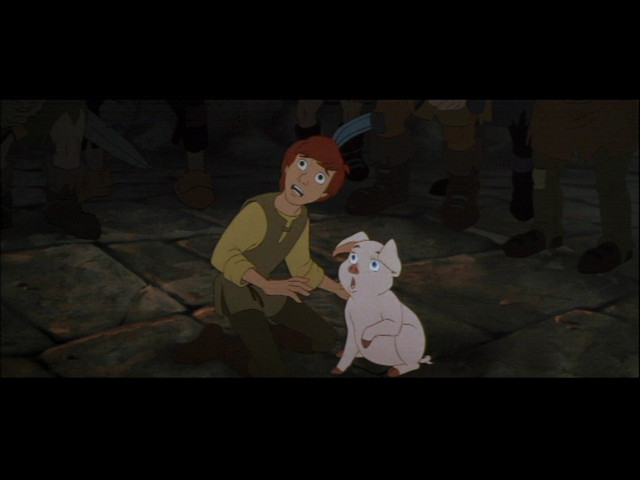 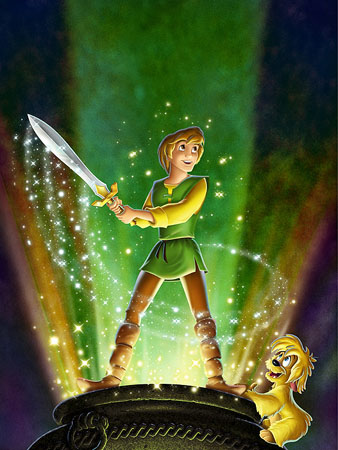 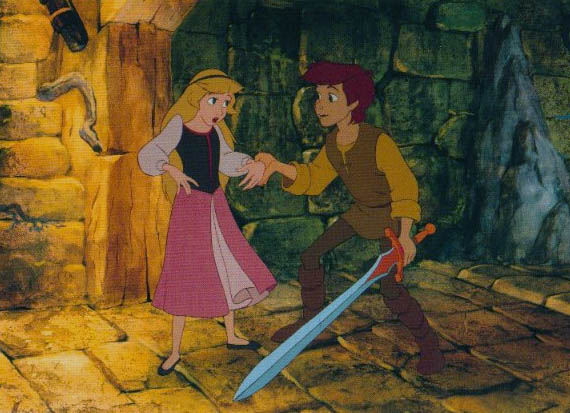 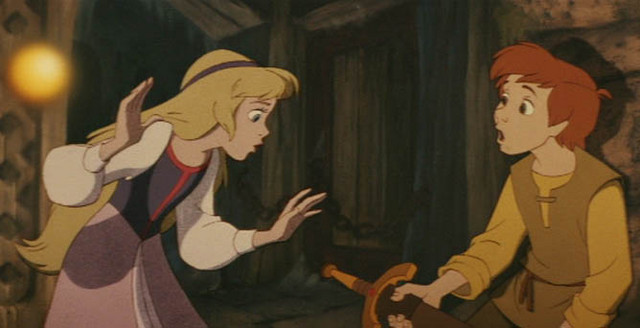 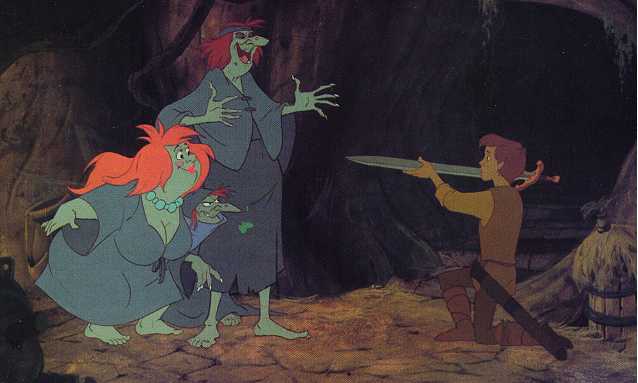 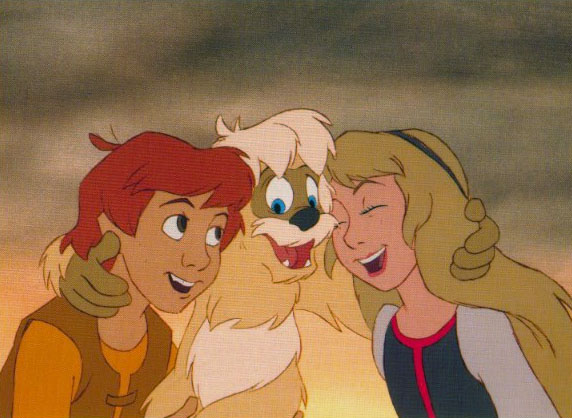 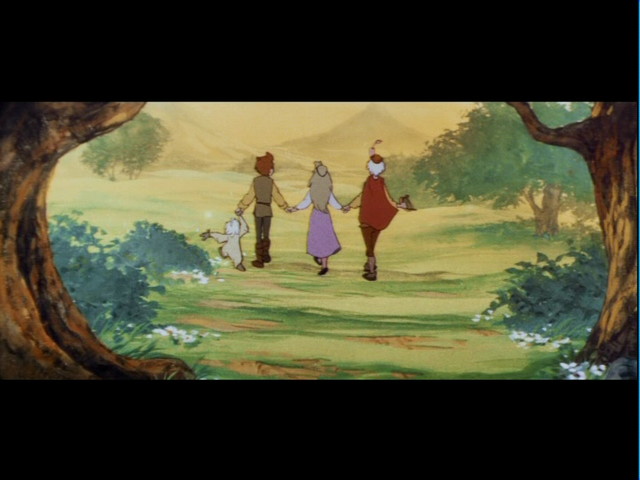 Quotes from the Pig Boy

Eilonwy: I'm Princess Eilonwy. Are you a lord, or a warrior?
Taran: Uh, no. Uh... I-I-I'm an assistant pig keeper.
Eilonwy: Oh, what a pity. I was so hoping for someone who could help me escape. Oh, well, if you want to come with me, you may.

Eilonwy: Oh, Taran, I'm afraid it'll soon be over for us.
Taran: I hadn't planned it to end like this, Eilonwy.
Fflewddur Fflam: Oh, I wish I'd stayed a toad.

Orddu: Now listen carefully. The Black Cauldron can never be destroyed. Only its evil power can be stopped.
Taran: Then there is a way. But how?
Orddu: A living thing must climb into it of its own free will.
Gurgi: Gurgi is bold and brave. He will climb into evil cauldron.
Orddu: However, the poor duckling) will never climb out alive.
Gurgi: (jumping away from the cauldron) Yikes!

Orddu: It's decided, then. You shall have the Black Cauldron.
Eilonwy: You mean, you'll give it to us?
Orddu: That's not what I said. You weren't listening. We never give anything away. What we do is bargain, trade.
Taran: Well, you'll not have my sword!

Taran: What does a girl know about swords, anyway?
Eilonwy: "Girl"? "Girl"? If it wasn't for this girl, you would still be in the Horned King's dungeon.

Gurgi: No, master. Not go into evil cauldron.
Taran: If I don't, we're all lost. Out of my way.
Gurgi: Gurgi not let his friend die. Taran has many friends. Gurgi has no friends.
Taran: No, Gurgi! Don't jump! No! (Gurgi jumps into Cauldron) No!

Orddu: We have business with your little hero.
Taran: Hero? Gurgi was the hero.

Taran: (to a goat) His royal majesty, the Horned King. We meet at last. (Taran rattles the goat's horns with his stick) Even the Horned King trembles with fear. See, Hen-Wen? Everyone runs from the famous Taran of Cael Dallben. (the goat butts Taran and knocks him down, and, pretending to die) Prydain's greatest warrior breathes his last.

Taran: I'm not afraid of the Horned King.
Dallben: Then you are a very foolish boy.

Taran: For your sake, you'd better be telling the truth.
Gurgi: Gurgi not lie. Not this time.

Vote for Taran as your favorite hero here!

Check out the links page for some more on Taran, or just go back to the Heroes homepage.