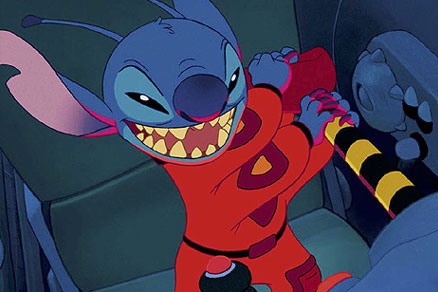 Stitch (more formally Experiment 626) is a creation of the self-proclaimed "evil genius", Dr. Jumba. Super strong, incredibly intelligent, and very naughty, 626 is sentenced to execution for public disruption and disrespect, as well as being an abomination of science, but he manages to escape, steal a cruiser (the "red one"), and head off into space. 626 is shot down, but crash lands on an island of Hawaii. Jumba is incarcerated, but is released with orders to go to the island and retrieve 626, along with the ecologist alien, Pleakley. Stitch is run over by a massive diesel, but as resilient as he is, he is unconscious, but not fatally injured. He's taken to an animal shelter where he's discovered and adopted by the lonely and precocious social misfit Lilo, much to her older sister and guardian, Nani's dismay. Stitch is cranky and naughty, disrespectful and destructive, as per the nature of his creation, and he doesn't understand the concept of behaving or family. Lilo tries to tame him, and turn him into a model citizen, but it all goes horribly wrong. Stitch finally realizes the gravity of the situation when Lilo is almost taken away from Nani by social services. Lilo runs away, but both she and Stitch are caught by Captain Gantu, sent from the alien council to capture Stitch when Jumba and Pleakley prove incompetent. Stitch escapes, but Lilo is still captured. Stitch, Nani, Jumba and Pleakley join together to save Lilo, and they manage to get her. When the councilwoman herself appears on the beach, furious at Gantu, Jumba and Pleakley, she nearly takes Stitch as a prisoner, even though he seems more reformed, and seems to be much more civilized and intelligent, until Lilo beats the system and states that she owns Stitch, having bought him officially from the animal shelter. Not to be accused of stealing, and also because she knows it's right, the councilwoman "banishes" Stitch to exile on earth with his new family.

Stitch is featured in the original film, its two spin-offs, Stitch! The Movie, and Lilo & Stitch 2, as well as the Lilo & Stitch TV series.

Stitch is for a lot of the first film a sort of villain himself. He has to overcome his own programming as a destructive force to be reckoned with to fit in with his new family. In the traditional sense, however, Captain Gantu, as well as Pleakeley and Jumba for much of the film, are more of a threat to Lilo and Nani's situation. My thoughts on Experiment 626:

This film is fun and sweet, and has a really interesting look and feel. It feels like an animated watercolor painting, which fits the nature and content of the film perfectly. It's a little heavy-handed in theme (is there ANYONE who doesn't know what ohana means by the end??), but that's the story they were telling, and it was effective. Stitch is borderline annoying, but mostly because of the marketability they've forced from him. In the film, he's pretty sweet and charming, when he gets past his "bad stage". Lilo is precocious and interesting, and Nani is a perfectly exasperated older sister. It's a fun, fast-paced, random film. 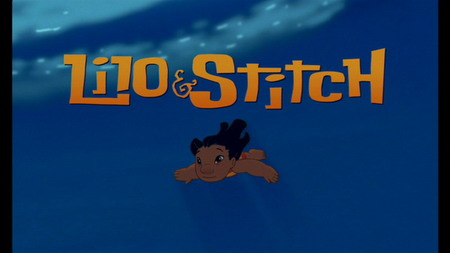 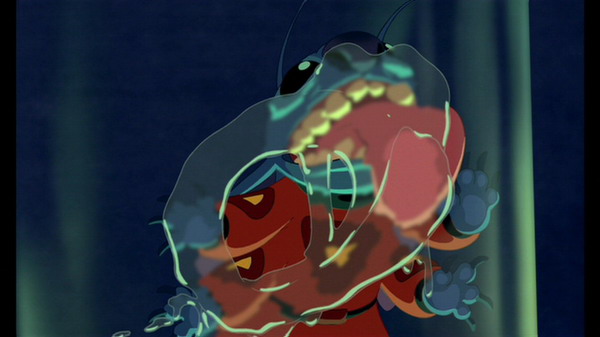 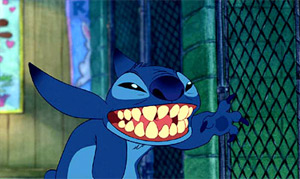 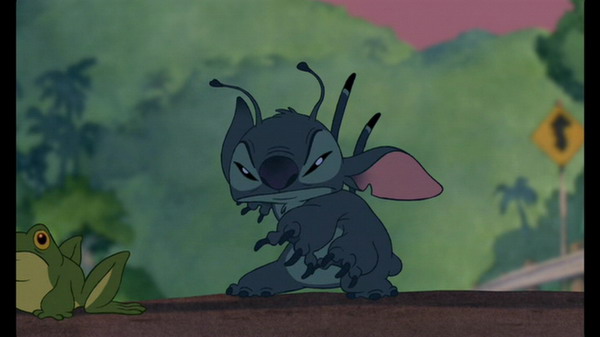 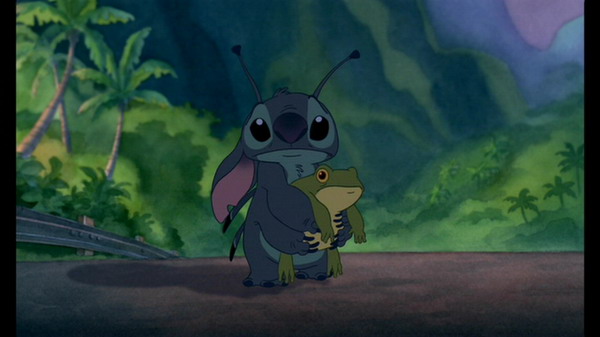 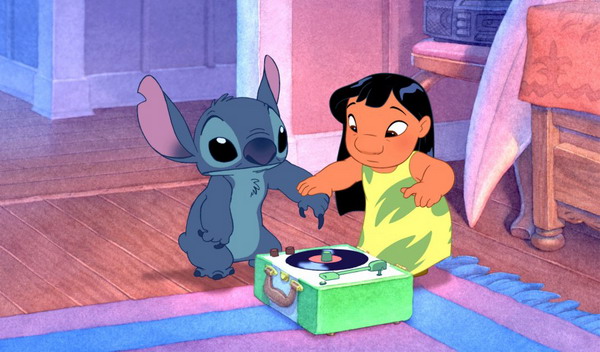 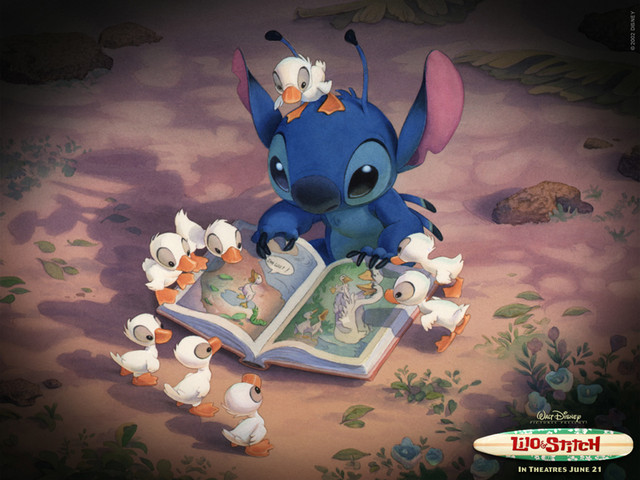 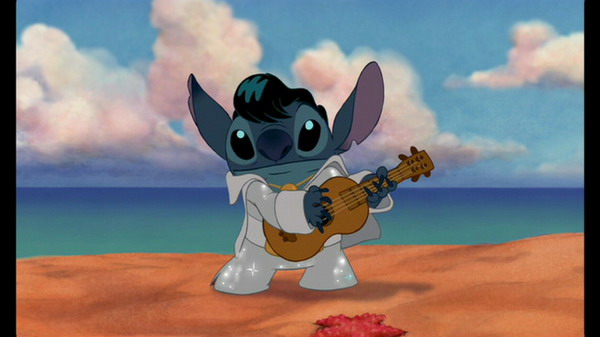 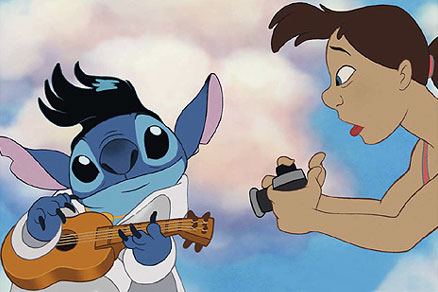 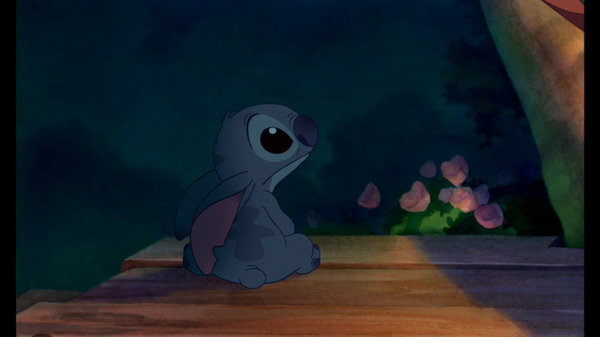 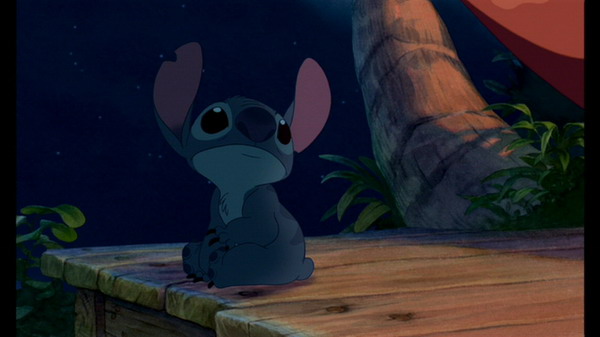 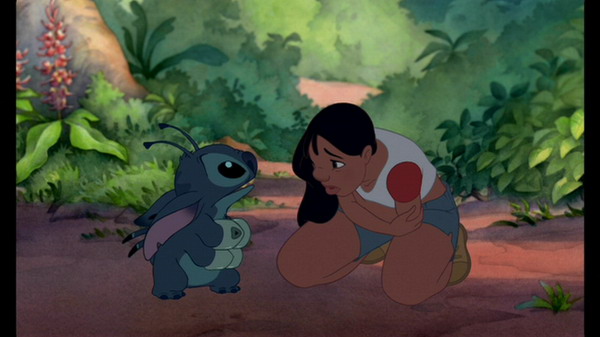 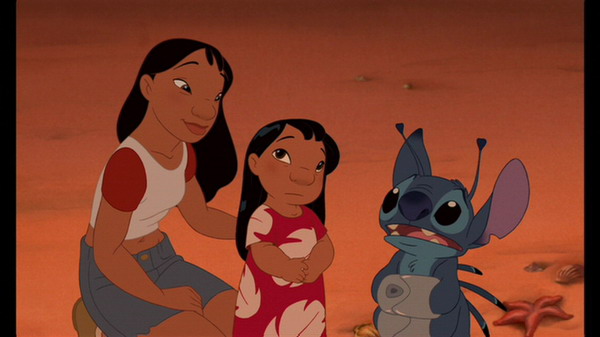 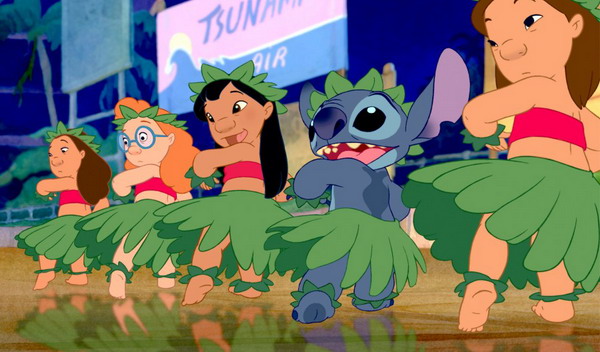 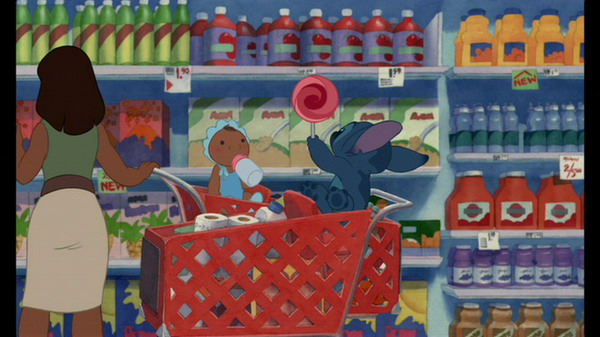 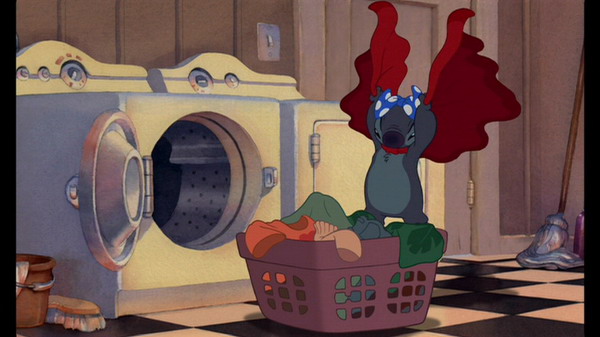 Stitch: (while using a VW Beetle to defend himself against attackers) Blue punch buggy... no punch-back!

Stitch: This is my family. I found it, all on my own. It's little, and broken, but still good. Yeah, still good.
Lilo: Ohana means family, family means nobody gets left behind. Or forgotten.

Gantu: Ah! You're vile; you're foul; you're flawed!
Stitch: Also cute and fluffy!

Jumba: WHAT? after all you put me through, you expect me to help you just like that? JUST LIKE THAT?
Stitch: (alien language) (nods) Ih.
Jumba: Fine!
Pleakley: "Fine"? You're doing what he says?
Jumba: He's very persuasive!

Lilo: You came back.
Stitch: "Nobody gets left behind."

Nani: Now talk! I know you can.
Stitch: Okay, okay...
(Nani freaks and smacks him down with a tree branch)

Grand Councilwoman: Experiment 626. Give us a sign you understand any of this. Show us that there is something inside you that is good. (Stitch clears his throat; the council members listen in anticipation)
Stitch: Meega, nala kwishta!
(the entire council gasps in horror)
Grand Councilwoman: How naughty!
Jumba: I did not teach him that.

Vote for Stitch as your favorite hero here!