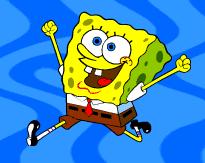 SpongeBob is a sponge that lives in a pineapple under the sea, is best friend's with a dim-witted starfish named Patrick and a sassy squirrel who lives in a oxygen-filled dome, bothers his next-door neighbor, a curmudgeon octopus named Squidward, and works in a burger joint, The Krusty Krab, owned and operated by the greedy and money-driven Mr. Krabs. SpongeBob is in many ways not at all heroic, he's kind of like the kid that most of us wish we could all remain, but he's also true of heart and a great friend. He loves simplicity and happiness, and to have fun. With the evil and tiny Plankton, the grumpy and impatient Squidward and the good-natured but endless slave-driving of Mr. Krabs, SpongeBob manages to stay unfettered and optimistic by his surroundings. He's not perfect, and he can be extremely irritating to his friends and neighbors, but he's a good guy at heart, a hard worker and a model undersea citizen, and Bikini Bottom would definitely be a lesser town without him.

SpongeBob is voiced by Tom Kenny.

SpongeBob never really has much romantic interaction, since, naive as he is, he has more important things on his mind (like blowing bubbles and going Jellyfishing), but I always kind of thought he and Sandy had some romantic tenstion between them... SpongeBob's greatest nemesis throughout the ages has been Plankton, particularly in the film when Plankton gets closer than ever to putting Mr. Krabs out of business (by stealing the secret formula for the Krabby Patty and using it to attract business to his dead restaurant, The Chum Bucket) and to taking over the world, but he's always thwarted by bright-eyed SpongeBob, much to his own dismay. Also in the film, Plankton's hitman, Dennis, is pretty threatening, and the "Cyclops" who runs the Shell City gift shop, drying out sea creatures and gluing google eyes on them to make smelly knick-knacks almost has his wicked way with SpongeBob and Patrick. Mr. Krabs and Squidward sometimes prove villainous with their degrading of SpongeBob, and Larry the Lobster sometimes fills the role of bully, but in the end, SpongeBob doesn't have too terrible a time in Bikini Bottom. 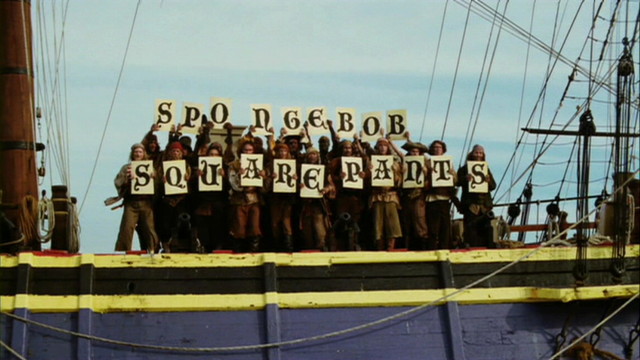 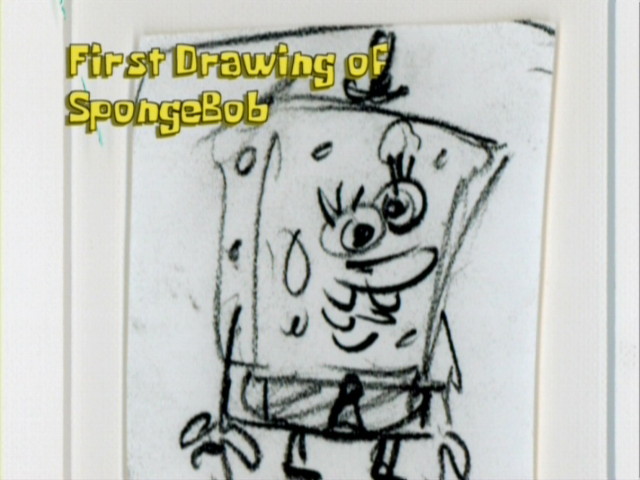 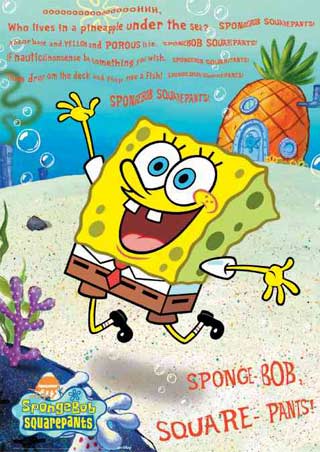 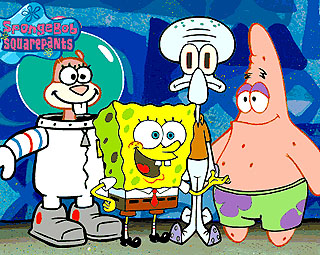 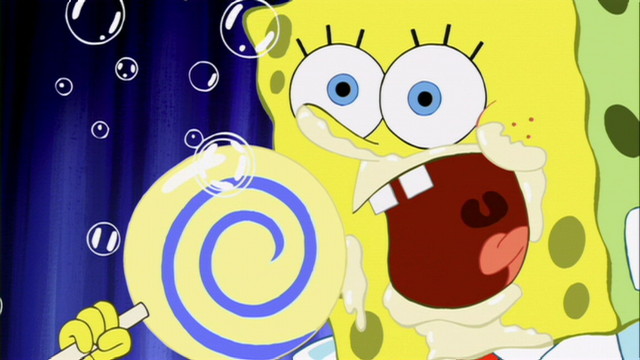 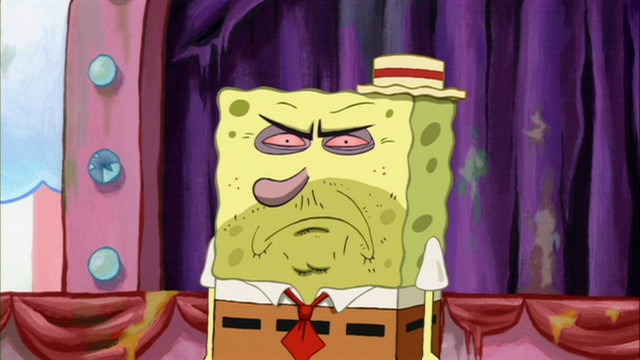 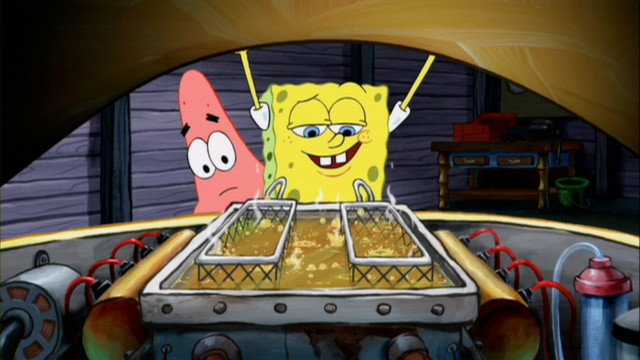 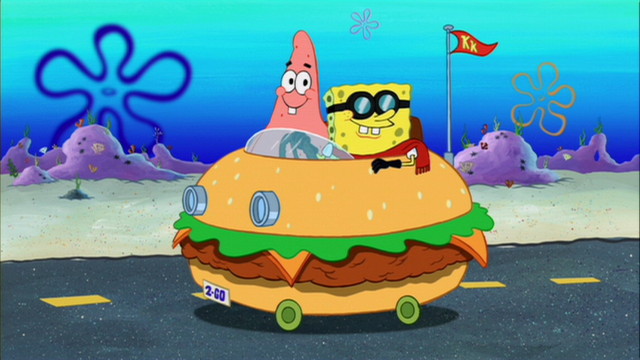 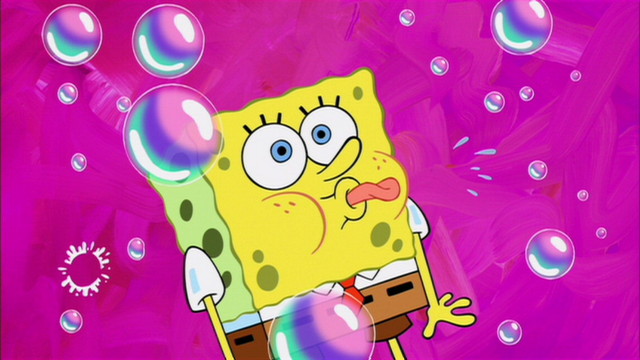 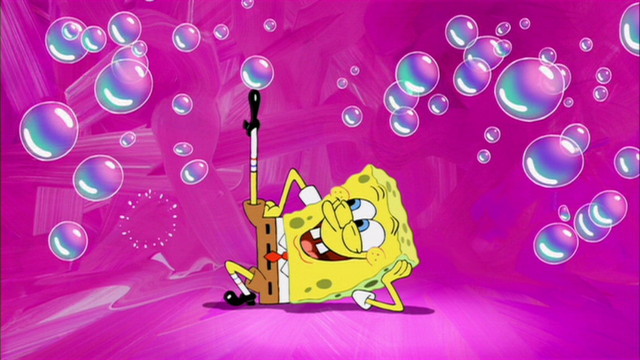 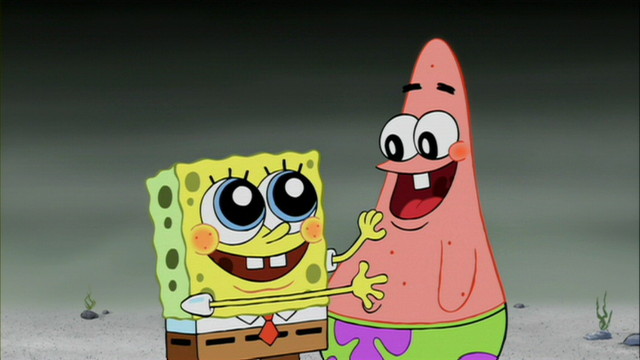 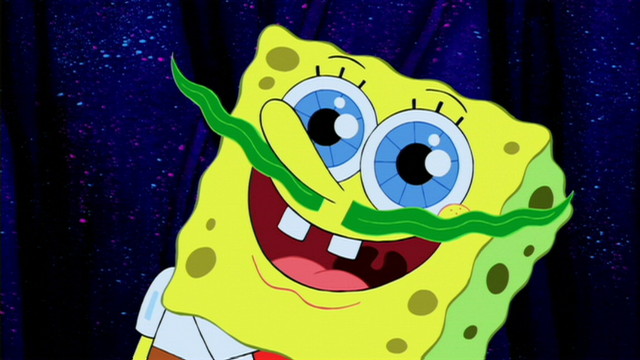 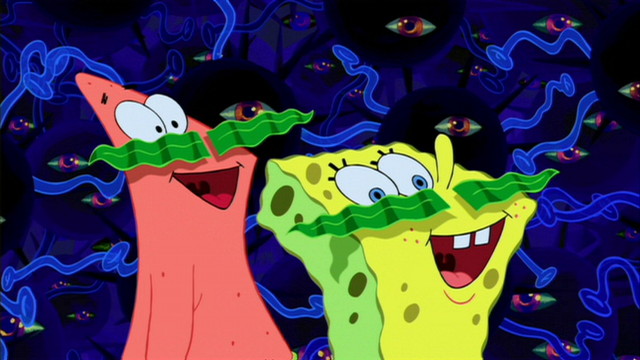 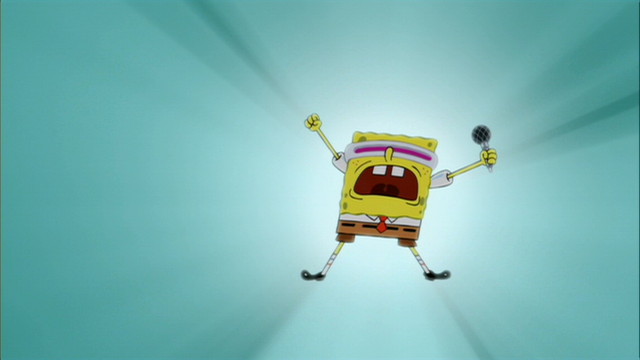 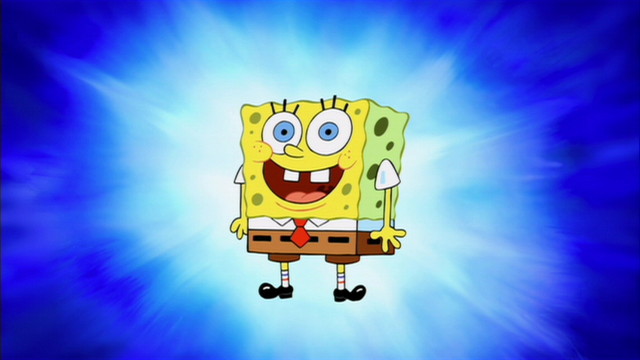 Words of Wisdom from SpongeBob

From the TV series:

SpongeBob SquarePants: (on working the night shift) Isn't this great Squidward? Just you & me together for hours and hours and hours! And then the sun'll come up, and it'll be tomorrow, and we'll still be working! It'll be just like a sleepover! Only we'll be sweaty and covered with grease!

SpongeBob SquarePants: Hey, everybody! Not ripped pants... (Rips out pants) Pants ripped off. Someone call the police, there's a pants thief on the loose!

(talking about wild horse he found)
SpongeBob SquarePants: She seems mysterious so I'll call her Mystery. She also seems graceful and majestic, so I'll call her Grace, or Majesty, or Debbie.

SpongeBob SquarePants: Knick, knack, the patty's back! You did it, Mr. Plankton! Victory screech!

Sandy Cheeks: Don't you DARE take the name of Texas in vain.
SpongeBob SquarePants: You mean we can't say anything bad about dumb old Texas?

SpongeBob SquarePants: (sings to cheer up and encourage Plankton) 'F' is for friends who do stuff together, 'U' is for you and me, 'N' is for anytime or anywhere at all...
Chorus: Down here in the deep blue sea!
Plankton: 'F' is for fire that burns down the whole town, 'U' is for Uranium bombs. 'N' is for no survivors when you...
SpongeBob SquarePants: Plankton, those things aren't what F.U.N. is all about. Now do it like this. 'F' is for friends who...
Plankton: Never! It's completely idiotic.

SpongeBob SquarePants: Mother of pearl. The oyster's a mother. And that pearl's no pearl, it's an egg.

SpongeBob SquarePants: This is not your average, everyday darkness. This is... ADVANCED darkness. Hey, if I close my eyes it doesn't seem so dark.

SpongeBob SquarePants: I guess I'll have to find a new best friend. Hey. Squidward.
Squidward: NO.

(Squidward and SpongeBob believe they are on the verge of death)
Squidward: SpongeBob, no matter what I've said, I've always sorta liked you.
SpongeBob SquarePants: Squidward, I used your clarinet to unclog my toilet.
Squidward: What?

Squidward: My wish is that the people of Bikini Bottom will stop paying any attention to the inane drivel that is constantly streaming out of this dunderhead's mouth.
SpongeBob SquarePants: Gee, Squidward, maybe Santa will bring me a dictionary so I can understand what you just said.

SpongeBob SquarePants: Here at the Krusty Krab, you are the captain, and I am your cabin boy. You just give the word, and I'll throw myself in the brig! May I take your order?

SpongeBob SquarePants: What kind of monsters are we? That poor creature came to us in his hour of need, and we let him down. Squidward's always been there for us when it was convenient for him. Evelyn, when your son was trapped in that burning building, who saved him?
Evelyn: A fireman.
SpongeBob SquarePants: And Larry, when your heart gave out from all those tanning pills, who revived you? Larry: Some guy in an ambulance.
SpongeBob SquarePants: Right! So if we just imagine that Squidward was a fireman or some guy in an ambulance, then maybe we can discover what it truely means to be in a marching band.
Fish: Yeah, for the fireman!

SpongeBob: I am confident in my abilities to successfully succeed.

SpongeBob SquarePants: (waiting for the bus) Getting hungry. Glove candy dispenser! Good thing I went to Glove World. (takes candy from dispenser, then spits it out) Eww! Glove-flavored.

SpongeBob SquarePants: Have you forgotten what we are looking for KNEE-DEEP IN YESTERDAY'S TOP FORTY SONGS?

SpongeBob SquarePants: Mystery got a belly ache from eating too many krabby patties, so I made her a bicarbonate of soda.

SpongeBob SquarePants: Did you hear about the goldfish who went bankrupt? Now he's a bronzefish.

SpongeBob SquarePants: (patrolling the streets as hall monitor, he sees a couple inside a house) An open window!
Female Fish: More seaweed medley, dear?
SpongeBob SquarePants: They've left themselves susceptible to danger. I must teach them the error of their ways... through example. (SpongeBob jumps through the window wearing a ski mask) Yaaah! I'm the open window maniac! (the couple run out the door) I hope you learned a valuable lesson.

Patrick: I get to be the mommy!
SpongeBob SquarePants: Patrick, I don't think you can be the mommy cause you never wear a shirt.

Squidward: Okay, SpongeBob, I bet you can't play music on a piece of paper. (plays on his clarinet)
SpongeBob SquarePants: (he claps) All right, Squidward, all those wrong notes you played made it sound more original.
Squidward: I didn't play any wrong notes. (plays again)
SpongeBob SquarePants: Yeah, see, you're playing it like this. (plays likes Squidward) ...when ordinarily it goes like this (plays it right) (a huge piece of music appears in the background) (stops playing) I'm currently playing in the key of A minor.

Patrick Star: I'm supposed to get a toy with this.
SpongeBob SquarePants: All right folks, this one goes out to my two bestest friends in the whole world: Patric and this big peanut guy. It's a little ditty called......"WAITER!"

SpongeBob SquarePants: I am 100-percent man! And this man has got something to say to you.

SpongeBob SquarePants: I think I made my point.

SpongeBob SquarePants: You don't need a license to drive a sandwich.

SpongeBob SquarePants: For your information, we are not kids, we are men.

Vote for SpongeBob as your favorite hero here!