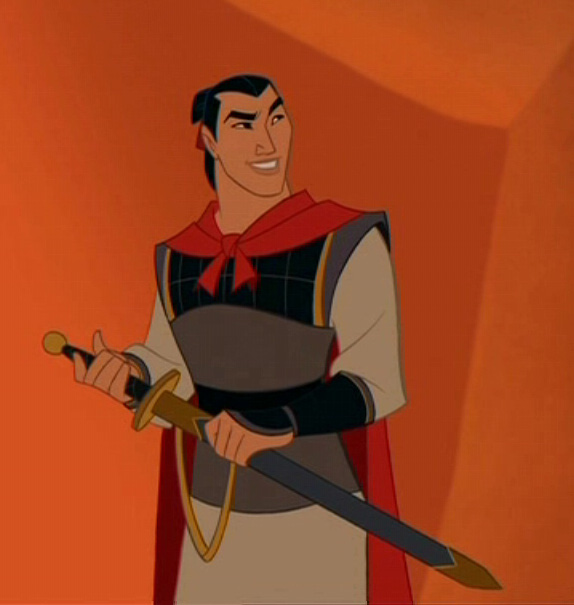 Letīs get down to business
to defeat the Huns!
Did they send me daughters
when i asked for sons?
Youīre the saddest bunch i ever met
and you can bet before we're through
mister, Iīll make a man out of you!

I'll Make a Man Out of You
Goldsmith/Wilder

Newly appointed, Captain Li Shang, the son of a prestigious Chinese general, is heading up the regiment where Mulan masquerades as a soldier to save her father's life. They're being trained to help in the battle to protect the Emperor and the kingdom from the invading huns. Shang is hesitant about "Ping" at first, since the "young man" hardly seem an adequate soldier. Frustrated at how his newly-appointed group of soldiers isn't shaping out, Shang perseveres at his task. When the troops, Ping included, start to shape up, Shang is encouraged, and when they receive notice that they're needed at the front (a fake, courtesy of Mulan's companions, Mushu and Cri-Kee, to make sure she has the chance to be a war hero), Shang leads his troops, finally convinced their ready. When they find a village plundered and burned, and the bodies of their fallen comrades, including Shang's father, he's discouraged, but his military instincts soon kick in and he stoically leads his men away, toward the imperial city. When the huns appear, their leader Shan Yu leading a surprise attack, Mulan is instrumental in their defeat, causing a massive snow avalanche. Mulan saves Shang when he's nearly buried by the snow, and When Mulan is injured, and the medic examines her, her secret is discovered. Shang feels betrayed and hurt, but defies the law that she must be executed, repaying her act of saving his life. He leaves, believing the huns are defeated, to report to the Emperor, but Mulan, left behind in disgrace, discovers a core group of the huns surfacing, and following the troops to the Imperial City. Mulan races to warn Shang, but still angry about her deception, Shang doesn't trust her anymore. Just as Shang is about to report to the Emperor about their losses and victory, the huns appear and kidnap the Emperor. Mulan leads her friends on a masquerade to get into the palace to save the Emperor, and Shang, realizing Mulan's worth and integrity, joins them. A fierce battle ensues on the rooftop of the palace, and Mulan is able to defeat Shan Yu for good. Shang, conflicted by his feelings for Mulan, awkwardly thanks her, but realizes, with some help from the Emperor, what a wonderful girl she is, and heads to her home to return her helmet, and is invited to stay for dinner...

In the sequel, Shang proposes to Mulan, but their relationship and their differences of character are tested when they're assigned to escort the Emperor's three daughters to a neighboring empire to fulfill a merger of the kingdoms through an arranged marriage, as well as by Mushu for his own selfish reasons. Mulan's feelings about following her heart are threatened by Shang's stoic feelings of patriotism and duty. When they're set upon by bandits, Shang falls off a bridge, seemingly to his death, but he survives and stops Mulan from marrying the neighboring prince in place of the princesses. The two are at last married in the end.

Shang is voiced by B.D. Wong, while his singing voice is supplied by Donny Osmond.

Shang can be seen in Mulan, as well as Mulan II.

When Shang realizes Mulan is a woman, and after he gets to know her, he realizes he's in love with her. In the sequel, they finally get married. Shan Yu is responsible for the deaths of hundreds of Chinese, and the near-coup of China itself. How I feel about Mulan and her man...

This was one of the greatest films of the 90s, I thought, full of drama, comedy, romance, a super plot, and excellent characters. Shang and Mulan have an unconventional relationship, formed under a masquerade. Shang is a great character, slightly shallow at first, but by the end, and in the sequel, there is some real depth to him. He shows grit and integrity when he refuses to follow through with killing Mulan, and has to swallow his pride that a woman can be his equal on the battle field. An excellent film, a work of art, and charming characters. 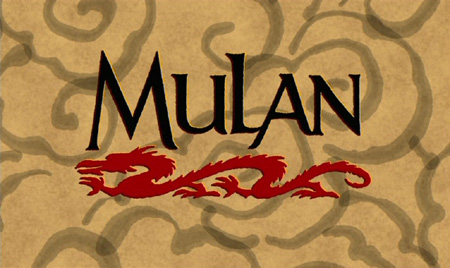 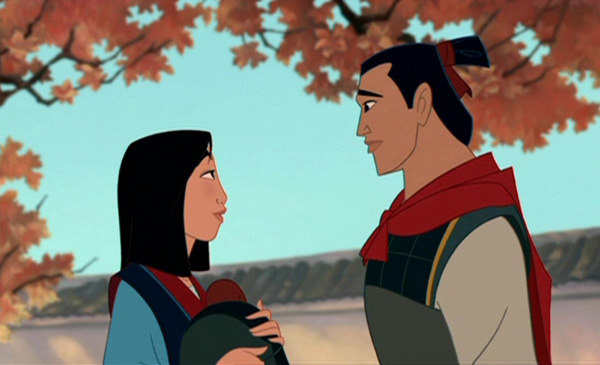 Pictures of the Captain... 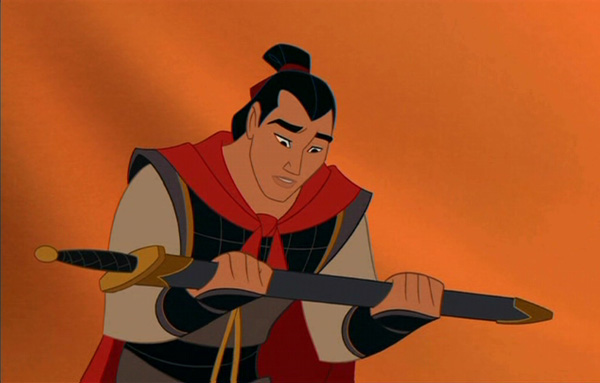 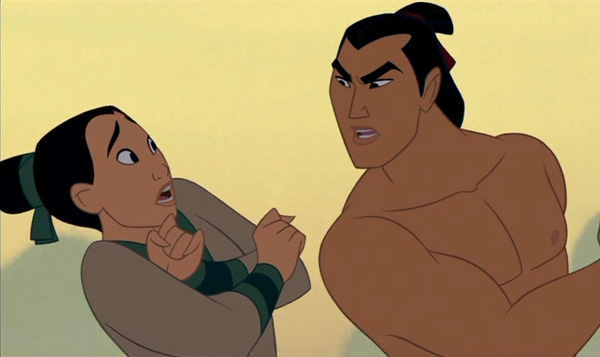 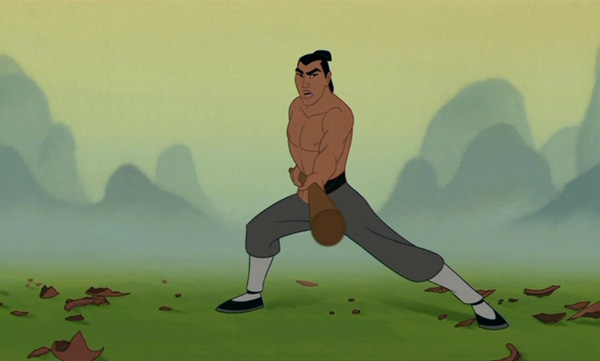 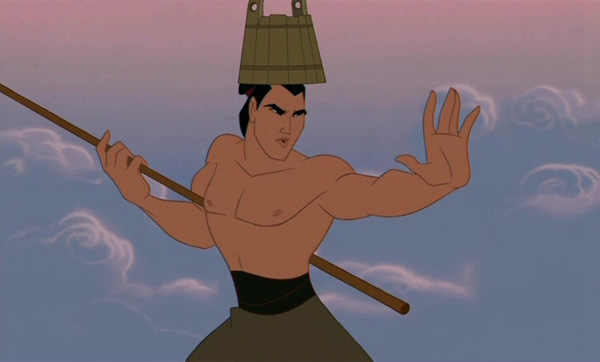 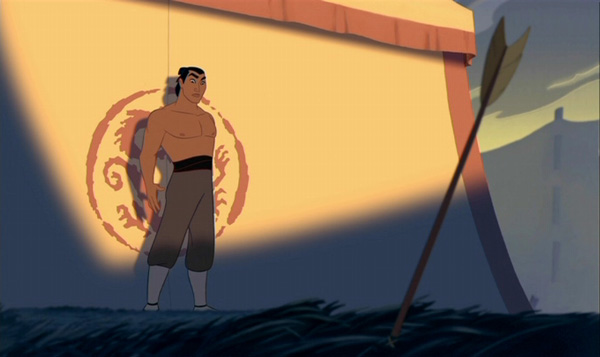 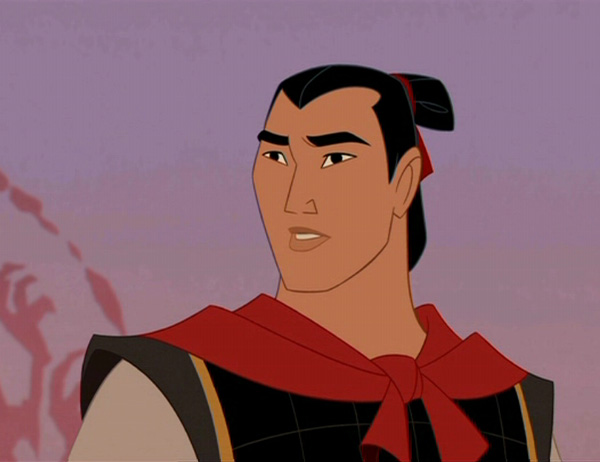 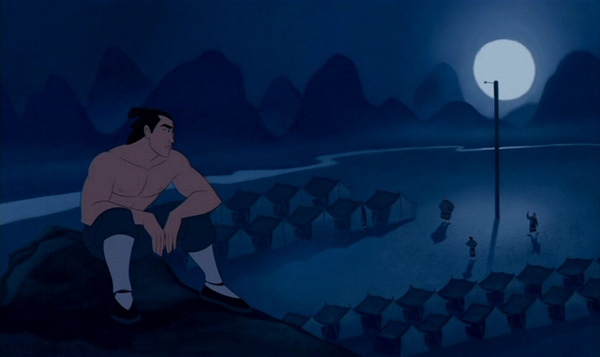 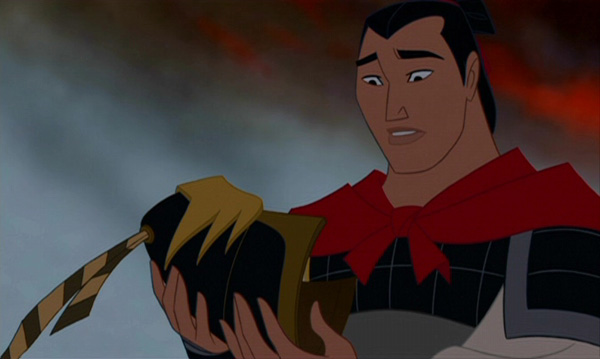 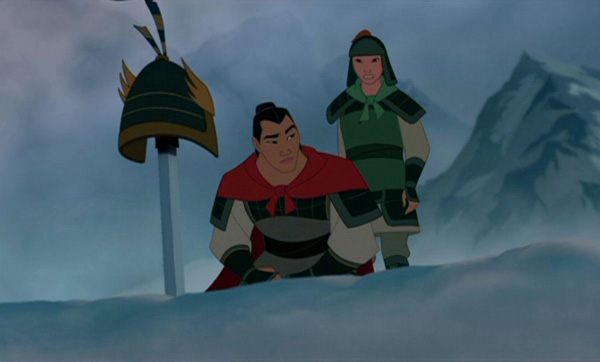 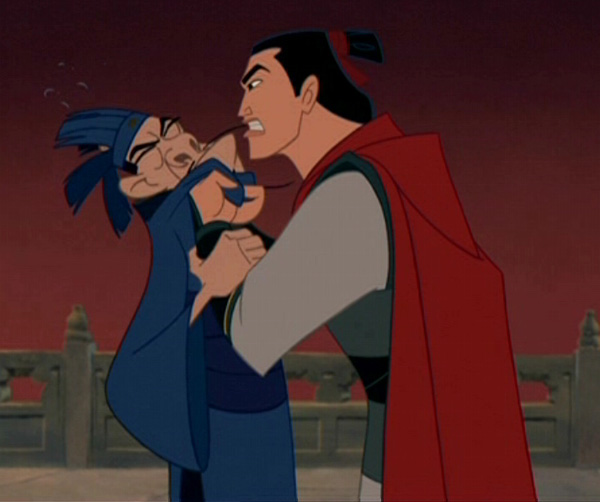 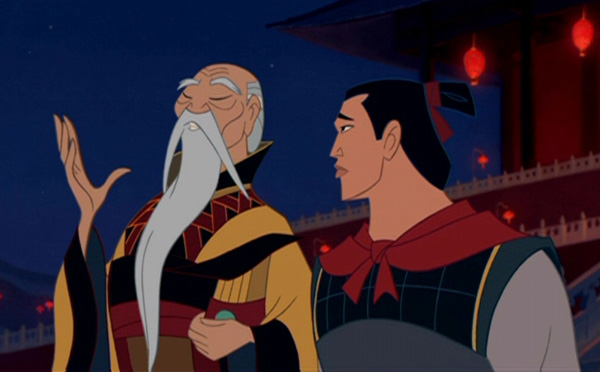 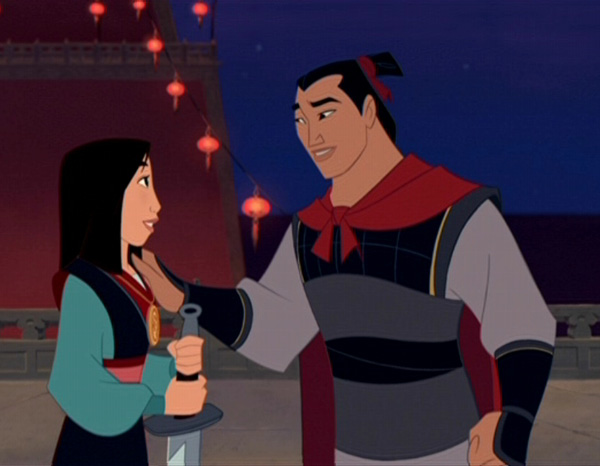 Shang: Captain Li Shang. Leader of China's finest troops. No. The greatest troops of all time. (exits his tent to find the troops fighting each other)
Chi Fu: Most impressive.

Mulan: Shang! Shang: (smiling a little) Mulan?
Mulan: The Huns are alive! They're in the city!
Shang: (frowning and riding ahead) You don't belong here, Mulan! Go home!
Mulan: (riding up beside him) Shang, I saw them in the mountains! You have to believe me!
Shang: Why should I?
Mulan: (scowling and riding in front of him) Why else would I come back? You said you'd trust Ping. Why is Mulan any different?

Grandmother Fa: Great. She brings home a sword. If you ask me, she should've brought home a man.
Shang: Excuse me. Does Fa Mulan live here? (Grandmother and Mother dumbly point to the garden) Thank you.
Grandmother Fa: Whoo! Sign me up for the next war.

Shang: A life for a life. My debt is repaid.

Chi Fu: Stand aside! That creature's not worth protecting!
Shang: She's a hero!

Vote for Shang as your favorite hero here!

Head on over to the links page, or back to the homepage.