Ron Stoppable is the blond, freckle-faced, self-confident sidekick and hero of the Disney Channel TV series, Kim Possible (2002-present). Ron also stars in the two made-for-TV films, Kim Possible: A Sitch in Time (2003) and Kim Possible: So the Drama (2005).

This series follows the adventures of high school secret agent Kim Possible, and her best friend and partner, Ron Stoppable (and, of course, the naked mole rat sidekick, Rufus). The two spend their days and nights (with the help of their tech expert, Wade, and a handful of people around the world who have called on Kim's help in the past) not only fighting evil in the forms of Dr. Drakken, Shego, Seńor Senior, Sr. (and his son, Seńor Senior, Jr.), Gill and Monkey Fist, but also trying to survive the drama and relationships in the halls of high school society. The two have a platonic, strictly business/friendship relationship, having been friends and partners since they were children, but it becomes increasingly obvious as the series progresses that Ron has definite feelings for Kim, and she returns them. Ron works at Bueno Nacho, and is the creator of the revolutionary naco (nachos and taco combined). Ron is a bit socially awkward, often says the wrong thing, and thinks he's more of a ladies' man than he really is, but he is a good kid with a good heart, and he's willing to do nearly anything to protect his friends. He's kind of the typical anti-hero, the kind of guy who wants so desperately to be popular, to be the hero, but often does the wrong thing anyway. Somehow, however, Ron is mostly dauntless in his efforts and his opinion of himself, convincing himself that he's totally cool. All in all, his covered-up lack of confidence and his occasionally-displayed awkwardness and clumsiness is a perfect balance for Kim's composure and elegance, even in battle.

In Kim Possible: A Sitch in Time (according to imdb.com), "Kim and Ron start out a new school year, only to find out that Ron's family is moving to Norway. This puts a strain on their partnership, just as Dr. Drakken, Monkey Fist, and Duff Killigan team up to find and use an ancient time travel device to rule the world. Attacking Kim in the past, present, and future, can these villians succeed? Or will an unforeseen force be more destructive?"

In Kim Possible: So the Drama (again, according to imdb.com), "Dr. Drakken has an evil new plot for world domination, but his ultimate success depends upon finding out KP's weakness which may involve a new hottie at Middleton High School named Eric, who suddenly sparks feelings in Ron about Kim that resemble much more than friendship. To make matters worse, Bueno Nacho, Ron's favorite fast food chain has turned sour on him by bombarding him with little Devil diablo toys. Does this mean KP may finally have to surrender to Drakken once and for all?"

Point of interest: It seems that Kim Possible was nominated for several Emmy awards, and actually won one. Pretty good for a Disney Channel series, yeah?
P.S. Am I the only one to note the similarities between Ron Stoppable and Ron Weasley?... Just thought I would mention that.

Ron is voiced by Will Friedle, who is not only no stranger to the Disney Channel, but has also done a great deal of voice work for animation.

Ron has had a couple crushes in his time, probably most notably with a girl at school named Tara, but none of them compare to what he feels for Kim. When Kim's attention is diverted to Eric, Ron realizes how much she means to him, and his feelings for her are eventually revealed. Kim Possible: So the Drama, they finally express their feelings for each other, and even share their first kiss. As stated above, Ron and Kim face many foes in their adventures, but probably the most persistent are the inept Dr. Drakken and the vicious Shego. 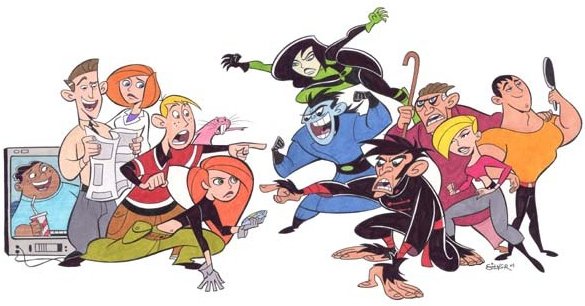 Pictures of Ron and the rest 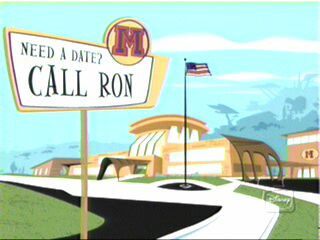 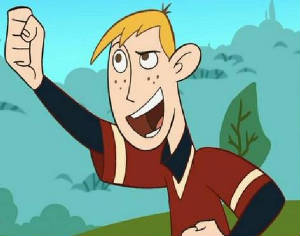 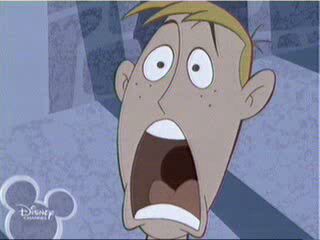 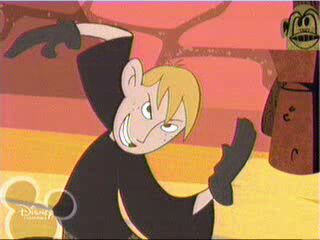 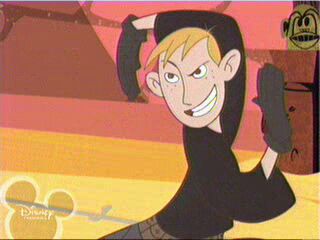 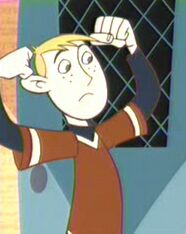 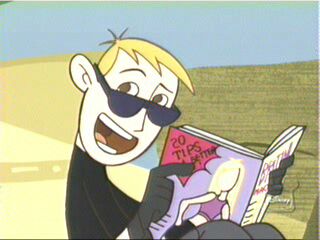 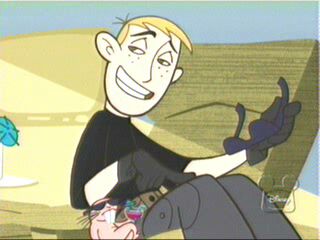 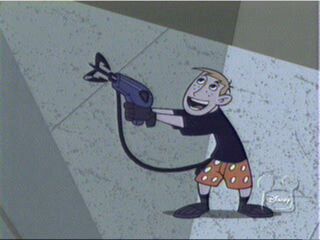 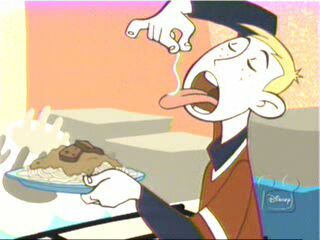 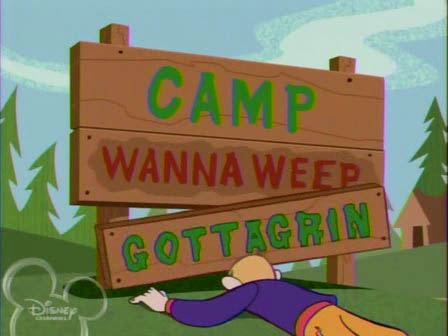 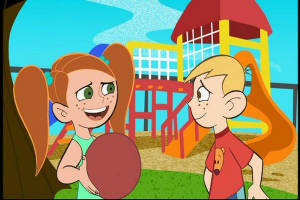 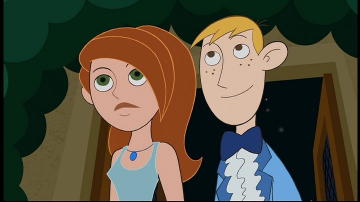 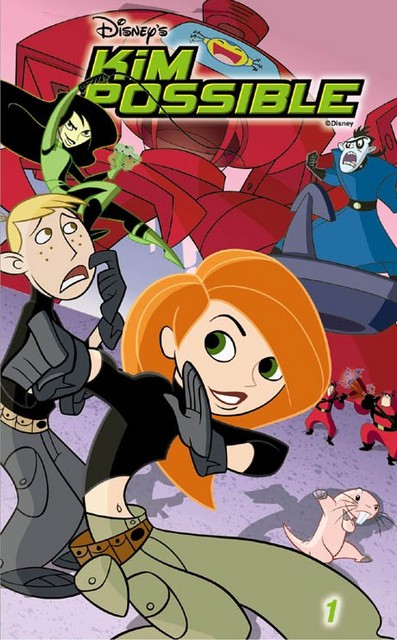 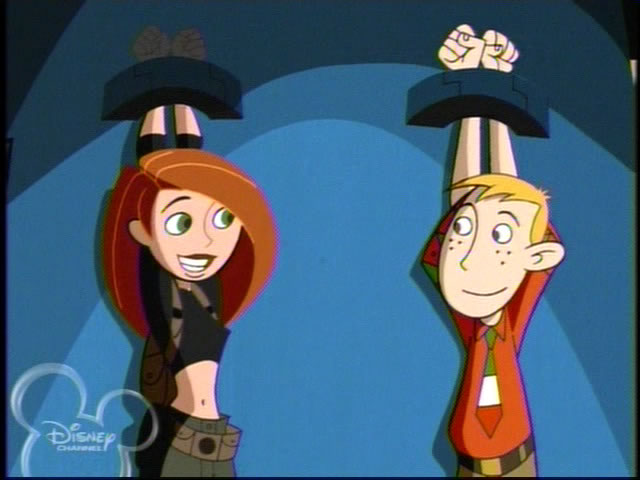 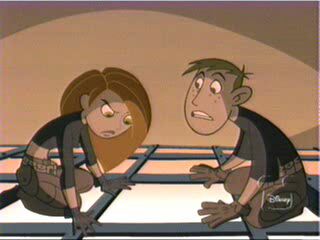 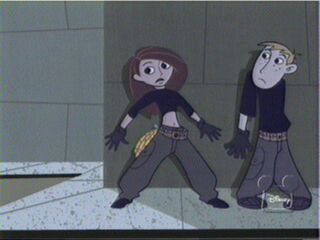 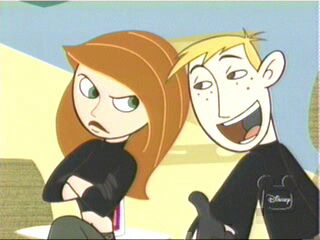 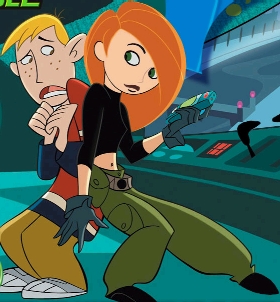 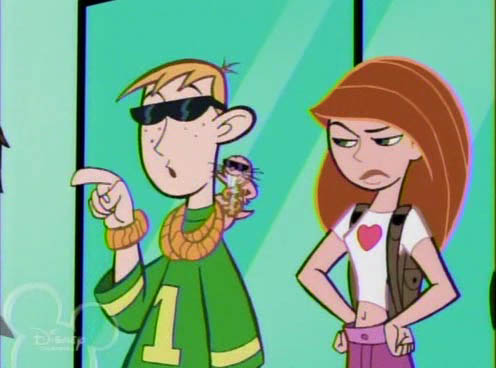 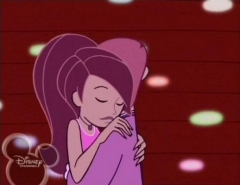 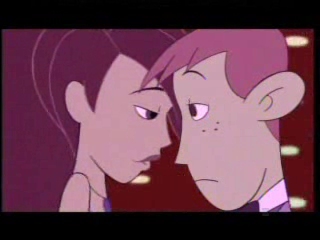 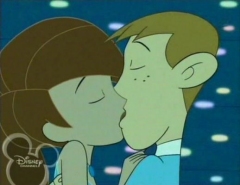 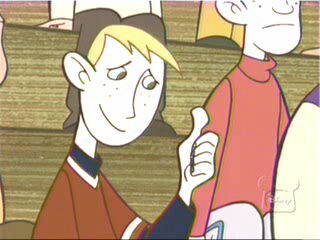 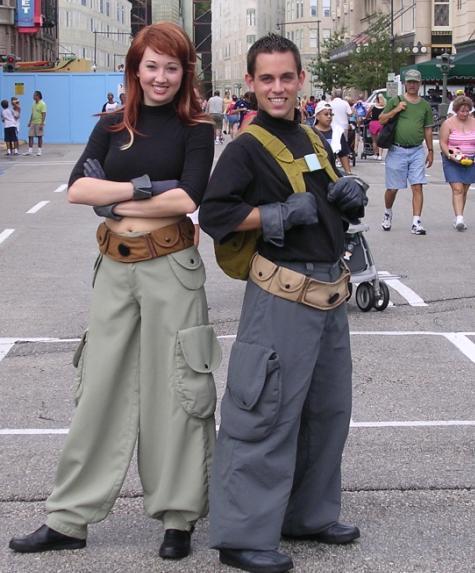 Apparently, Kim and Ron make appearances at the Disney parks... Too bad this Ron isn't blond!

Ron Stoppable: I am, what I is.

Dr. Drakken: Oh look, it's Kim Possible and her friend. Ron: Hello, I've got a name. Dr. Drakken: Which I can never remember.

Ron: (trying to get a date for the school dance) This arm is going to the dance on Friday. (Holds up arm) Who wants to be on it? (the girls flee, he switches arms) How about this arm?

(Kim claims Ron's life is easier than hers)
Ron: What about the struggles of raising Rufus as a single parent? Or the pressures of maintaining my image. (Kim glares at him) Okay, so I don't have an image yet. But I'm working on it. And I gotta tell you, it's exhausting.

Ron: (In the cafeteria line) Um excuse me, I called ahead for the kosher meal.

Kim: (Ron is slurping the last of his drink) Is that really necessary?
Ron: Uh yea! Every drop counts when you're a thousand miles away from free refills!

Quotes from Kim Possible: A Sitch in Time

Ron: 'Scuse me, scary orb thing? Where are you taking us?
Robot: The attitude adjustment center.
Kim: Isn't that the high school?
Robot: Prepare to be drained of all individuality and spirit.
Ron: Yep, high school.

Kim: (exiting the sewers) So far so good.
Ron: (frowning) Oh really? Tell that to my shoes.

Ron: (to his past self) Time travel, it's a cornucopia of disturbing concepts.

Ron: (to Shego) You know, in this light you're kinda cute.

Quotes from Kim Possible: So the Drama

Ron: (hiding in his old treehouse with a slingshot) I have an armed weapon!
Kim: Put the slingshot down Huck Finn, it's me.

Ron: (both are tied up) There are guys out there that are better for you than Eric. Guys that are real for one thing.
Kim: Do you really think there's a guy out there for me?
Ron: Out there... in here...
Kim: (realizing what he is saying) Oh. Really...?

(Ron gives Eric a tour of Middleton High School)
Ron: This is the cafeteria, where I'm told you can find a nutritious, hot meal. I haven't yet, but your mileage may vary.

Ron: No Soda For You!

Ron: (to Eric) Back off pretty boy!

Ron: Taking over the world is one thing, but you ruined Bueno Nacho. You're gonna pay.
Dr. Drakken: You can't be serious.
Ron: Note the serious face.
Dr. Drakken: Please, have mercy, uh, the name escapes me, oh, I beg of you.
Ron: Say my name. SAY IT!
Dr. Drakken: It's... uh, er, Ron... Stoppable.
Ron: (quietly) Boo-ya.

Ron: I feel as though a loop has been formed, and I'm not in it.

Ron: (after Kim leaves with Eric) I am NOT jealous.

Ron: (In his treehouse; Eric is below them) He can't come up here.
Kim: Ron...
Ron: No, I mean he CAN'T come up here. This treehouse has a weight limit and while I'm holding this slingshot, we're already pushing it.

Ron: Okay, Rufus. I think I'm ready. Not just for the dance, but to do something no man should ever have to do... Talk about his feelings!

Ron: (to cafeteria lady) I'll have the wild mushroom risotto with cracked peppers and fresh shaved parmesan, and please don't skimp on the truffle oil! (cafeteria lady scoops usual slop on his plate)

Ron: Oh, man, I always wanted to use this on somebody.
Kim: You did once, don't you remember?
Ron: Arnie Custer?
Kim: Arnie Custer.
Ron: I was just trying to stop him from hurting you.
Kim: I pulled him off you because you beaned him with this slingshot.
Ron: We were six, okay? The details are sketchy.

Ron: Camp Wannaweep. The worst summer of my life.
Kim: I know, I know... the ticks, the poison ivy, the toxic lake, your mom stopped accepting your phone calls...
Ron: Yeah... you know, all that stuff was bad, KP, but you know what was worse? Spending a whole summer away from you.

Vote for Ron as your favorite hero here!

For more about Ron, check out the Links page or head back to the Heroes homepage.