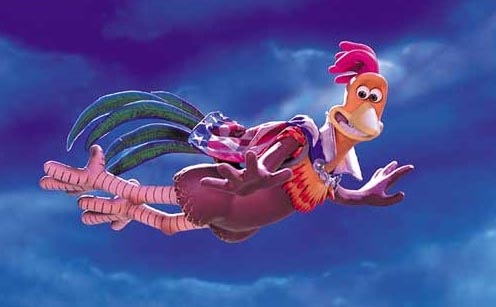 Set in a sinister 1950s Yorkshire farm, this films tells of a group of chickens who live in fear under the watchful, vicious eye of Mrs. Tweedy and her buffoonish, suspicious husband. One of the chickens, Ginger, is determined to be freed from their prison, but has trouble elliciting the help of any of her fellow hens, as the most of them are unspeakably incompetent and blase about their situation. When the egg industry doesn't seem lucrative enough for penny-pinching Mrs. Tweedy, she decides that chicken pot pies are a better business endeavor, considering how plump most of the chickens are. With each attempted escape, Ginger receives time out in the coal bin, and when a chicken is axed for not producing enough eggs, Ginger is distraught. But when she spies Rocky, a cocky American rooster, flying through the air, she hatches an idea. Rocky literally falls into the flock of antsy hens, and believing he can fly, Ginger convinces him to teach her and the others to fly so they can finally escape. Rocky outwardly agrees, but hopes to make his escape as soon as possible, as it is soon revealed that Rocky is actually a circus performer, and his "flying" was more like falling in convenient proximity. Ginger and Rocky lead a tempestuous romantic encounter, but when she learns he was an act, she is frustrated and shuns him. Rocky escapes on his own, but his conscience forces him back, where he leads the chicken in a truly great escape from the farm, with the help of some unscrupulous rats who have ways of getting parts to create a flying machine, manned completely by chickens. They are finally free to live the free life on an idyllic field of grass and flowers, and Rocky decides to stay with Ginger. 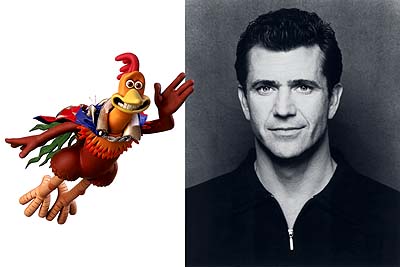 Rocky falls in love with the sassy and independent Ginger. Rocky and Ginger have a common enemy in Mr. and Mrs. Tweedy, but Rocky also has to overcome some character flaws of his own. My personal thoughts and analysis...

This, the first feature-length film from Aardman Animation (the masterminds behind Wallace & Gromit and Creature Comforts) is a definite winner as far as character and fun go. Definitely borrowing from films like The Great Escape, Escape from Alcatraz and The Shawshank Redemption, it's a classic escape film, complete with covert plans and varied characters. The plot trots along, and takes the audience for a real ride, fun and exciting all the way. Ginger and Rocky are very interesting characters, and their relationship is a joy to watch progress. Other characters, like the regimental General Fowler and the ultra-intelligent, scientific Mac, the businessrats Nick and Fetcher, as well as the contrasting Tweedys and their sinister dog, the cast is varied and interesting. This film was clearly a predecessor for Aardman's next foray into feature-film animation, the Wallace & Gromit film, which is a very good way to continue the legacy. 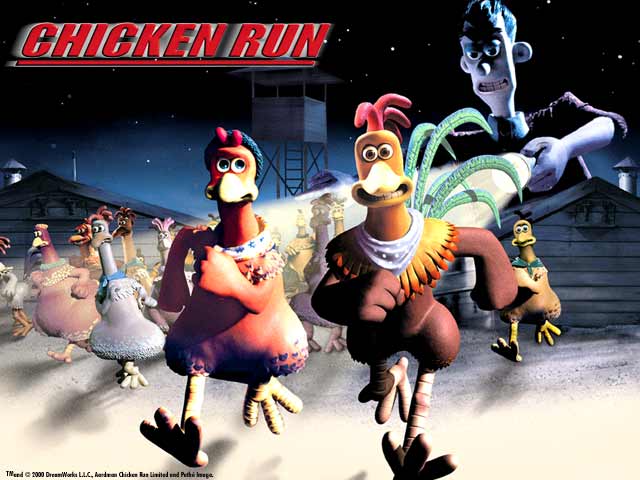 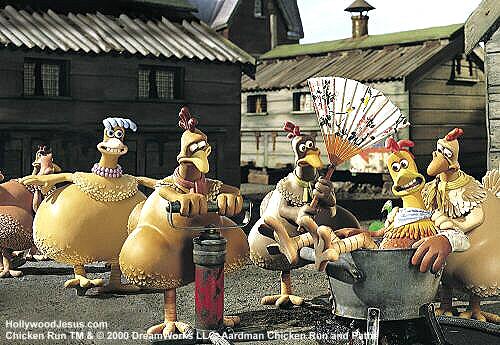 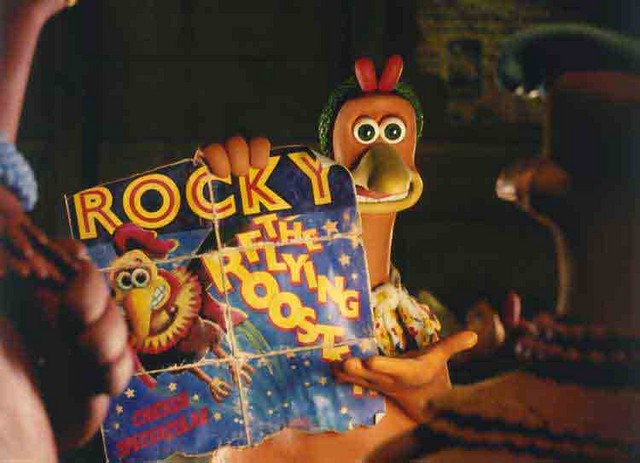 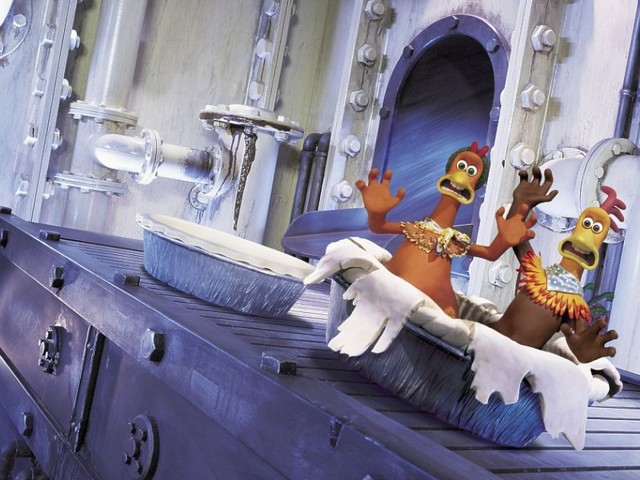 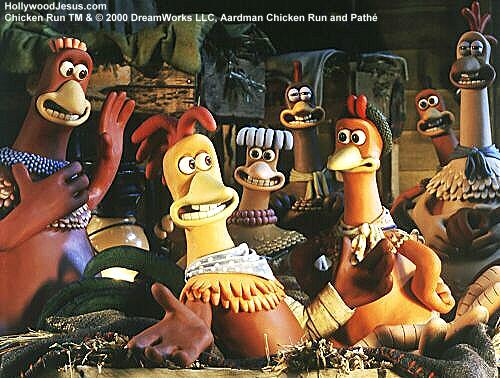 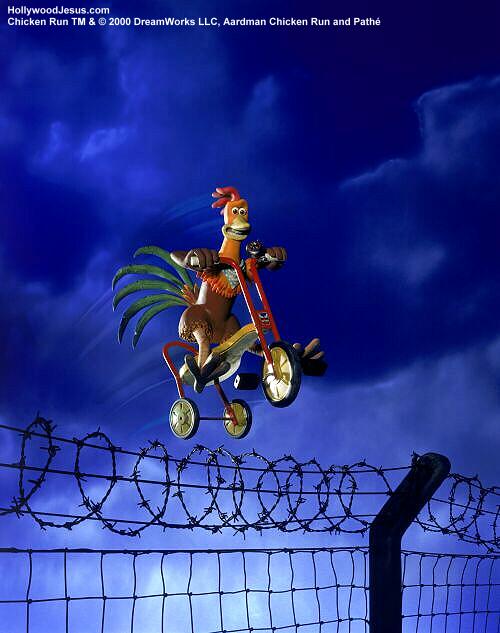 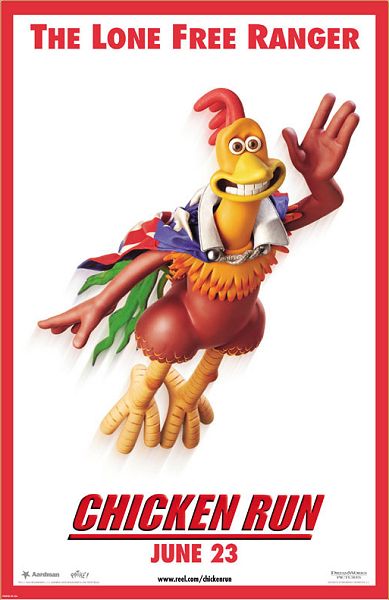 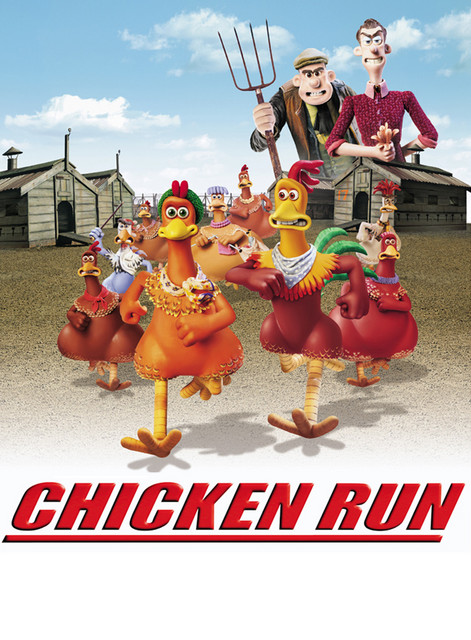 Rocky: Now, the most important thing is, we have to work as a team, which means: you do everything I tell you.

Ginger: I should turn you in right now.
Rocky: You wouldn't... would you?
Ginger: Give me one reason why I shouldn't.
Rocky: Because I'm... cute? (Ginger squawks to attract the farmer's attention) Hey, what kind of crazy chick are you? Do you know what will happen if he finds me?
Ginger: It's a cruel world.
Rocky: I just decided I don't like you.
Ginger: I just decided I don't care.

(after being asked where he's from)
Rocky: Oh, just a little place I call the land of the free and the home of the brave...
Mac: Scotland!
Rocky: No! America.

Rocky: (Presenting himself) You see, I'm a traveller by nature. I did that whole barnyard thing for a while but I couldn't really get into it. (to one of the chickens) Hi, how are you? (she swoons and faints, Rocky continues) Nope! The open road, that's more my style. Yep, just give me a pack on my back and point me where the wind blows. In fact, you know what they call me back home? You're gonna love this: The Lone Free Ranger.

(Rocky and Ginger are in an oven)
Rocky: It's like an oven in here.

Rocky: (to Ginger after being put against the wall) You know, you're the first chick I ever met with the shell still on.

Rocky: Wait a minute. Let me get this straight. You wanna get every chicken in this place out of here at the same time?
Ginger: Of course.
Rocky: You're certifiable! You can't pull off a stunt like that. That's suicide.
Ginger: Where there's a will, there's a way.
Rocky: Couldn't agree more. And I will be leaving that way.

(escaping from circus, after being shot out of a cannon)
Rocky: (shouts) Freeeeeeeeeeeedom!!!

Rocky: (Ginger falls down a chute) Oh, shoot!
Ginger: (falling) Rocky!
Rocky: I'll be down before you can say... (spots something about to be dumped on him) ..."mixed vegetables"!

Rocky: Ouch! What happened to my wing?
Ginger: You took a rather nasty fall.
Mac: (very fast, in strong Scottish accent) And sprained the anterior tendon connecting your radius to your humerus. I gave her a wee bit of a tweak, Jimmy, and wrapped her up.
Rocky: Was that English?

Rocky: Listen. Shh. You hear that? (silence) That's the open road calling my name, and I was born to answer that call. Bye. (he leaves)
Babs: He must have very good hearing.

(Rocky is about to be found by the circus)
Ginger: (black-mailing him) Teach us to fly and we'll hide you.
Rocky: And if I don't? (Ginger pulls breath to squaw, Rocky stops her) Was your father by any chance a vulture?

Rocky: Easy, Pops. Cockfighting is illegal where I come from.

Hen: And what brings you to England, Mr Rhodes?
Rocky: Why, all the beautiful English chicks, of course.

Rocky: (angry at Ginger) Listen! I've met some hard-boiled eggs in my day, but I'd say you're about 20 minutes!

Rocky: Is there a problem here?
Ginger: (rhetorically) Have we flown over that fence?
Rocky: Not quite.
Ginger: Then there's a problem.

Mac: (very rapidly, with a thick Scottish accent) Thrust! I went over my calculations, hen, and I forgot the key element missing is thrust!
Rocky: (after a long pause) I didn't get a word of that.
Mac: Thrust. Other birds, like ducks and geese, when they take off, what do they have? (shouts) Thrust!
Rocky: I swear she ain't using real words.
Ginger: She said we need more thrust.
Rocky: Oh, thrust! Of course we need thrust. Why, thrust and flying are, well, like this. (crosses fingers) See, that's flying and that's thrust.

Rocky: Sleep tight, angel face. The Rock is on the case.

(Rocky is hiding uncomfortably beneath Ginger's nest while the farmer is searching for him)
Ginger: Comfortable?
Rocky: Nice hideout. Ouch! I had more room in my egg.

Vote for Rocky as your favorite hero here! For more, check out the Links page or head back to the Heroes homepage.