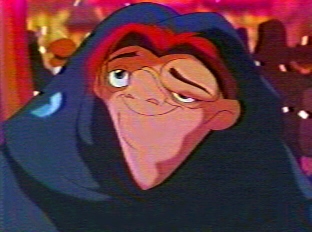 So many times out there
I've watched a happy pair
Of lovers walking in the night
They had a kind of glow around them
It almost looked like heaven's light...

Quasimodo is the humble hero from The Hunchback of Notre Dame (1996).

Quasimodo, the deformed son of gypsies, is raised in the Notre Dame bell tower by the self-righteous and imperious Judge Frollo (acting out of fear for his soul, and what he had a hand in concerning the soul of Quasimodo's mother). He's taught all his life he's a monster, not worthy of the notice of the Parisian people in the streets below. He has some friends, the gargoyles who spring to life when no one else is around, and they convince him to attend the annual Festival of Fools. When he's inadvertantly entered into the running for the King of Fools, a contest to find the ugliest face in Paris, the people are startled to realize his face isn't a mask after all. The master of ceremonies, Clopin, urges them not to panic, as he is after all the ugliest man in Paris, and Quasi is crowed King after all. Quasimodo is at first happy with his sudden popularity, but things turn ugly when the people start to make fun of him, throwing fruit and tying him onto the stage, turning it and humiliating him. Frollo, furious that Quasimodo disobeyed his demands that Quasimodo stay in the tower, refuses to help, but the independent and good-hearted dancing gypsy Esmeralda intervenes, demanding justice from Frollo for her people and all others who are oppressed. Frollo, furious, but inwardly intrigued by the fiery gyspy girl, sends Quasimodo back to the cathedral. Quasimodo is surprised when Esmeralda appears in Notre Dame later on, and when she spies him, she follows him up to the bell tower. The two get better acquainted, and Esmeralda realizes that Quasi has a good heart, and Quasi finds himself falling in love with her. He helps her escape, without running into the guards at the entrances of the cathedral, and his gargoyle friends convince him that Esmeralda is in love with him. Quasi, hardly daring to believe it, allows a little hope to enter his heart. He's disappointed when Esmeralda appears with a wounded Captain Phoebus, asking for his help in concealing Phoebus until he recovers. Quasimodo, for her, agrees, and has to act quick when Frollo appears, fixated and obsessed with Esmeralda, demanding to know is Quasimodo helped her escape. He leaves, informing Quasimodo that he has found the Court of Miracles, the hideout of the gypsies, and when Phoebus awakes, he and Quasimodo put aside their differences and agree to go to the Court themselves to warn the gypsies. Unfortunately, Frollo lied to Quasimodo, knowing that Quasi would go to warn Esmeralda, and followed the two to the hideout, capturing the gypsies, Phoebus and Quasimodo, chaining the bell ringer to the cathedral. Frollo sets out to burn Esmeralda for witchcraft, unless she agrees to be his lover, and when she fervently refuses, he sets fire to the sticks around her feet. Furious at Frollo's betrayal, Quasimodo breaks his chains, swings down from the bell tower and rescues Esmeralda, shouting that she has sanctuary in the cathedral. She doesn't respond to his voice, and Quasimodo believes her dead. Frollo appears, pretends to sympathize with Quasimodo, but pulls out a knife behind the hunchback's back. Quasimodo spies the shadow and turns on Frollo, increasingly furious at Esmeralda's seeming passing and Frollo's further treachery. He and Frollo engage in a precarious battle on the cathedral ledges, where Frollo falls to his doom. Quasimodo nearly falls to his death as well, but Phoebus, having broken free and leading the gypsies on a revolution, raced up the cathedral during the battle and managed to catch Quasimodo before he fell. Quasimodo, in a gesture of unselfishness and realizing his two friends belong together, gives his blessing to Esmeralda and Phoebus. He is welcomed into the sunlight, among the children and the townspeople, and lauded as a hero.

Quasimodo is voiced by Tom Hulce (of Amadeus).

Quasimodo falls for the beautiful, dancing gypsy Esmeralda (voiced by Demi Moore). He later finds true love in Madelleine. Quasi's nemesis is his "master," Dom Claude Frollo (voiced by Tony Jay). He acts all schnootant and says that he's so wonderful, but he has a major thing for Esmeralda, and blames it on her. Eventually, hey, he falls in a river of molen lead, whaddaya gonna do? My analysis...

This film is an achievement on many levels. You can read more of my thoughts on Phoebus's page, but I will reiterate that this is a masterpiece animation-wise, musically, thematically, and artistically. Quasimodo, as a character, is quite interesting. He's not the most charming hero in the Disney list, he's deformed, but not exactly as Victor Hugo described him in his novel, but has a good heart. 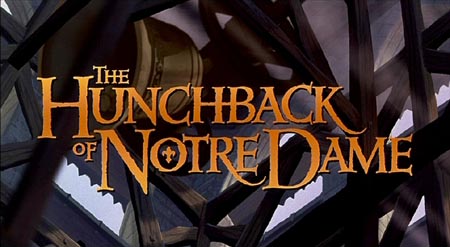 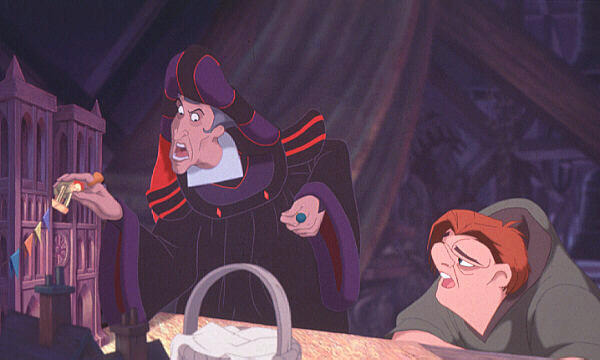 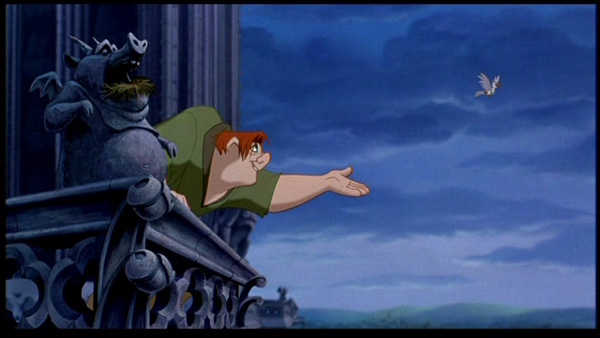 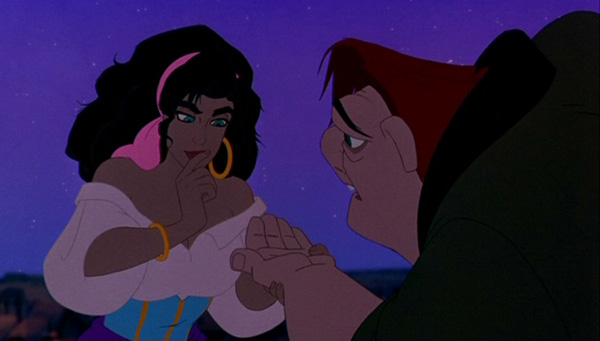 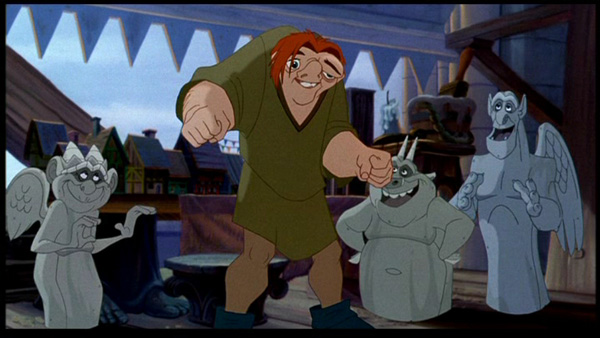 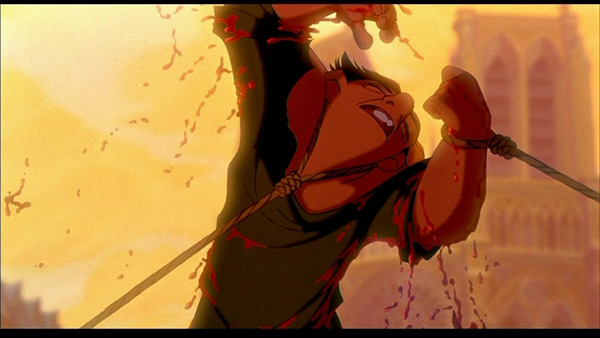 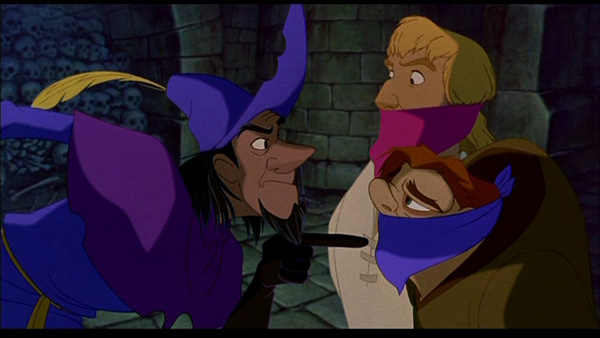 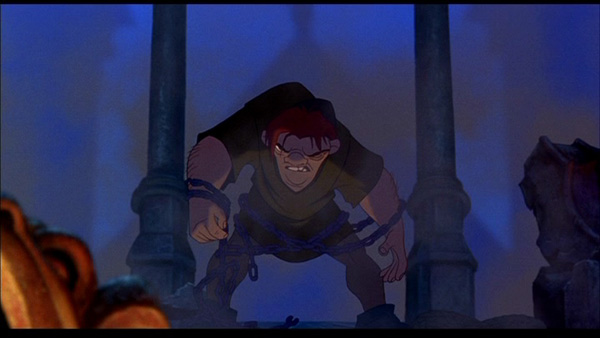 Frollo: Now, now. L-Listen to me, Quasimodo...
Quasimodo: No! You listen! All my life, you have told me that the world is a dark, cruel place. But now I see that the only thing dark and cruel about it is people like you.

Esmeralda: [reading Quasimodo's palm] Hmm. Hmm, mmm, mmm. Well, that's funny.
Quasimodo: What?
Esmeralda: I don't see any...
Quasimodo: Any what?
Esmeralda: Monster lines. Not a single one.
Esmeralda: (holds out her hand) Now, you look at me. Do you think I'm evil?
Quasimodo: No! No-No. Y-You are kind and good and... and...
Esmeralda: And a Gypsy. And maybe Frollo's wrong about the both of us.

Frollo: (picks up one of Quasimodo's wooden figures) Isn't this one new? It's awfully good. Looks very much like the Gypsy girl. I know, you let her escape!
Quasimodo: But I...
Frollo: And now all Paris is burning because of you!
Quasimodo: She was kind to me, Master.
Frollo: You idiot! That wasn't kindness! It was cunning! She's a Gypsy! Gypsies are not capable of real love! Think, boy! Think of your mother!

Frollo: Dear boy, whomever are you talking to?
Quasimodo: My... friends.
Frollo: I see.
Frollo: (taps the head of one of the gargoyles) And what are your friends made of, Quasimodo?
Quasimodo: Stone.
Frollo: Can stone talk?
Quasimodo: No, it can't.
Frollo: That's right. You're a smart lad.

Vote for Quasimodo as your favorite hero here!

Done? Go to the links for more information, or back home.