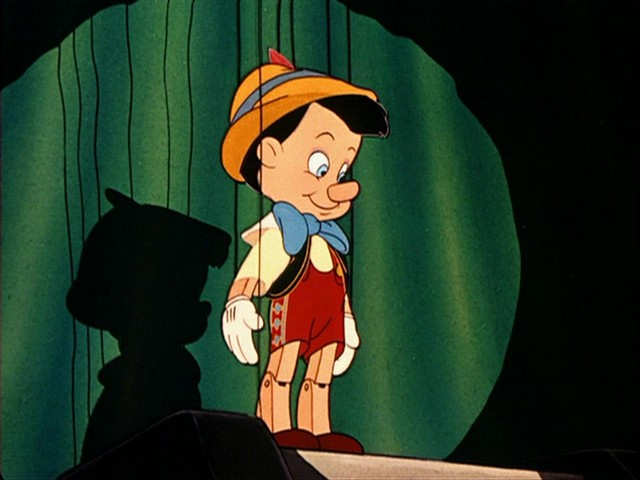 Pinocchio is the hero from Pinocchio (1940).

Pinocchio is created by Geppetto, a kind and lonely Italian woodcarver, and when Geppetto makes a wish on a star that his puppet would come to life, the Blue Fairy appears and grants Geppetto's wish as he sleeps. Pinocchio, now alive, but still made of wood, has to prove that he's good and that his heart is true and honest, he will be made a real boy. Pinocchio is much like an infant, new to the world, and curious about everything around him. He goes to school, but despite the advice of his conscience, Jiminy Cricket, he follows the paths that he thinks will lead to fame and glory. When he ends up at Pleasure Island, and he and the boys around him start turning to donkeys, he realizes the error of his ways and escapes, barely in time to make it back to Geppetto's, only to find he's gone, off looking for Pinocchio. He learns Geppetto went to sea, and goes with Jiminy to find him, to discover he's been swallowed by Monstro, the vicious whale. He and Jiminy enter the whale's stomach and find Geppetto alive, but imprisoned by the whale. They start a fire, causing Monstro to sneeze, blowing them out, but nearly killing them with Monstro's consequent attack. Pinocchio risks himself to save Geppetto, and when he's nearly dead, the Blue Fairy appears, turning him into a real boy, showing that his sacrifice and all he's learned on his experience has proven his heart is true, and he and Geppetto are a real family.

Pinocchio is voiced by Dickie Jones.

Pinocchio encounters many villais on his journey, from the greedy puppeteer, Stromboli, to the deluding and false "Honest John" Foulfellow and his silent, inebriated partner, Gideon, to the sinister Coach Master, the naughty, misleading boys of Pleasure Island, and the ultimate threat, Monstro the whale. My personal thoughts...

Pinocchio is one of those movies I grew up with, and I think it formed a lot of my childhood beliefs. It's a sort of allegory, a journey story, and one, I think, that has surprising religious overtones. Pinocchio's journey to become a real boy, proving himself to have a true heart and a good soul. He makes serious mistakes along the way, is easily misled and goes down the wrong path several times, but in the end, makes the ultimate sacrifice for his father, and proves that he has a pure soul. This is a perfect illustration of life's journey, and I think Pinocchio is an excellent film if only for this reason. The characters are also excellent and charming, and Pinocchio's innocence makes him automatically endearing. 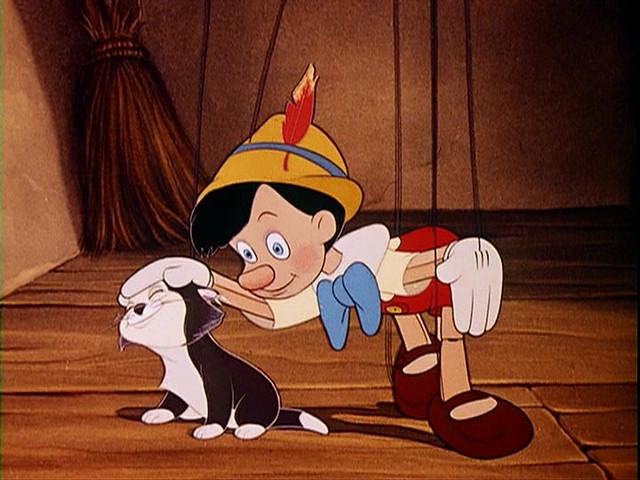 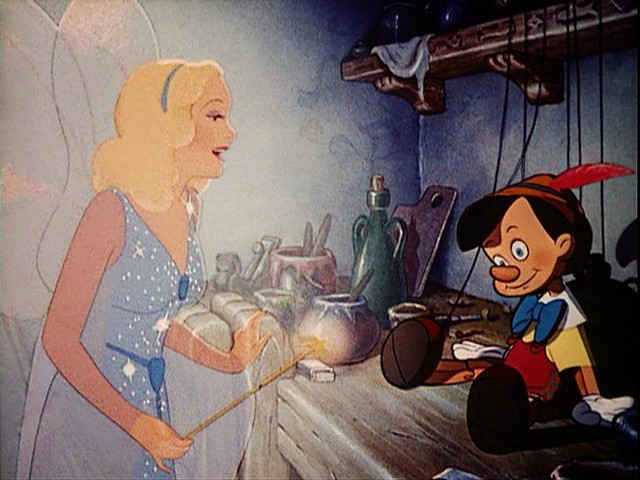 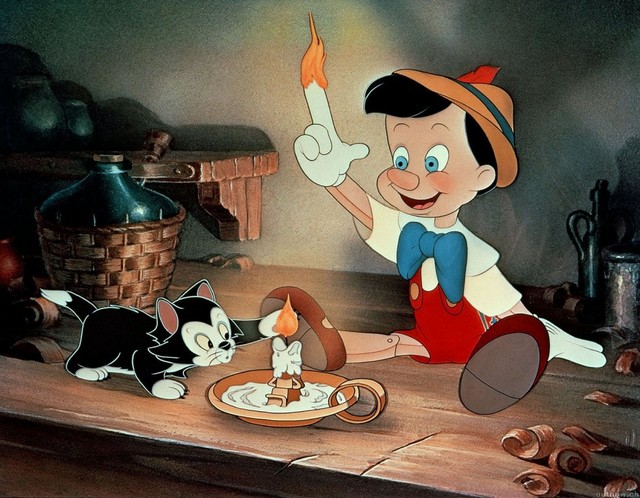 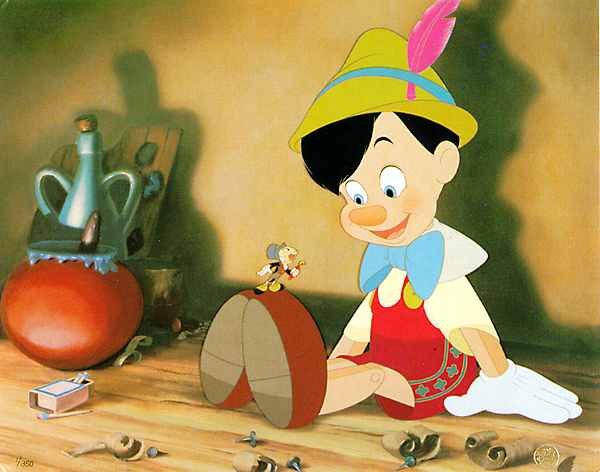 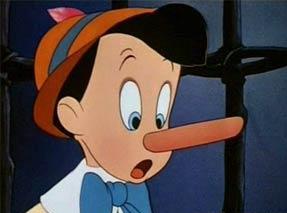 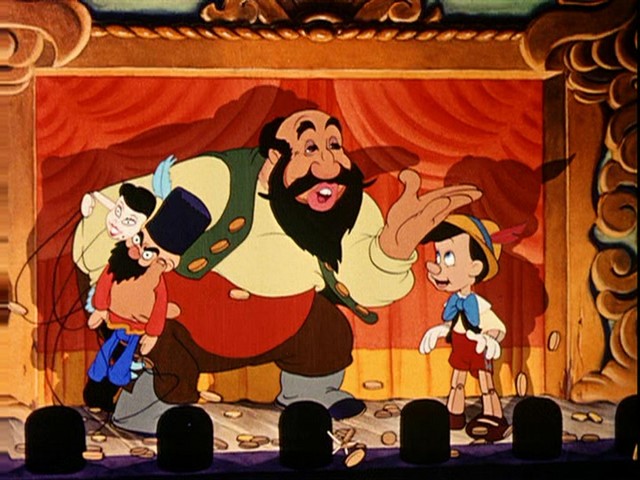 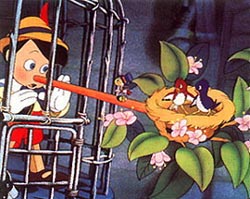 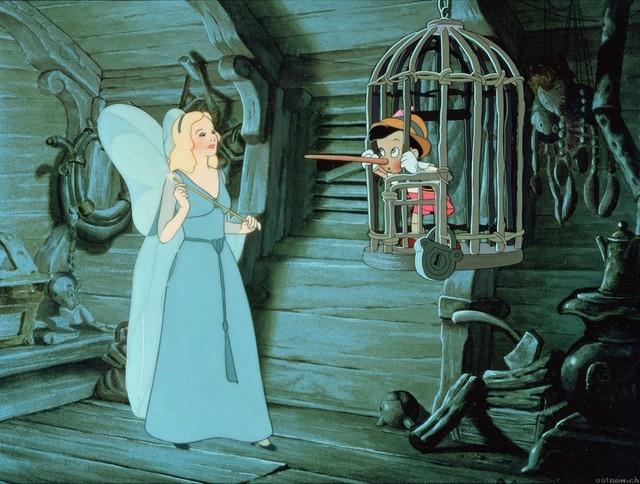 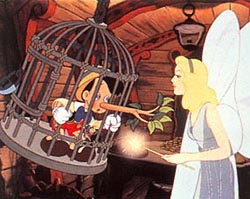 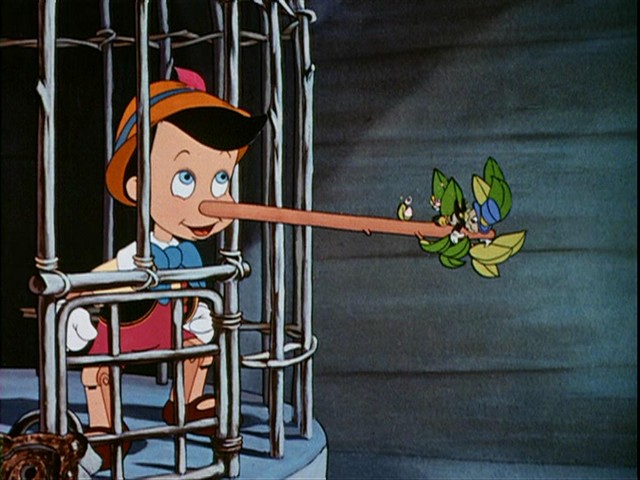 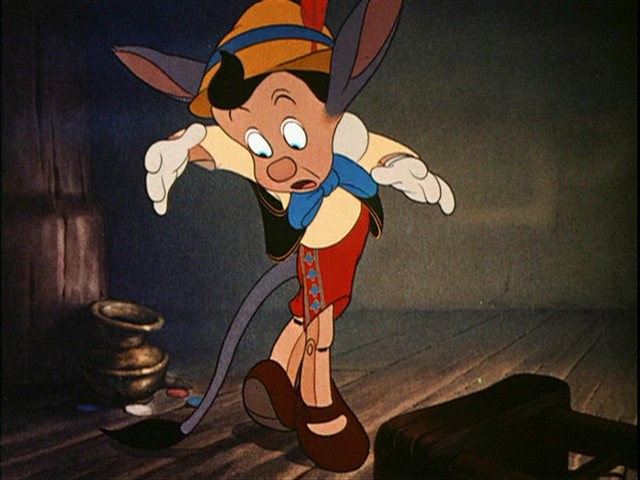 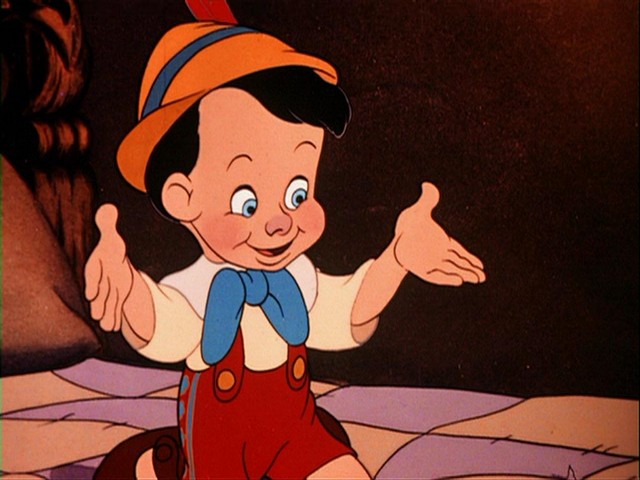 Lampwick: (picks up Jiminy) Hey, who's the beetle?
Jiminy Cricket: Put me down!
Pinocchio: He's my conscience. He tells me what's right and wrong.

Geppetto: Who's there?
Pinocchio: It's me!
Geppetto: (relieved) Oh. It's me

Vote for Pinocchio as your favorite hero here!