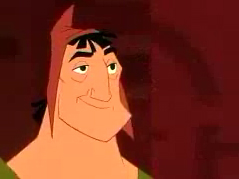 Pacha is a big guy with a big heart, a peasant who lives with his family on a scenic hilltop in South America. When he's summoned to the Emperor's palace, he's confused, but obeys the order. He's surprised to learn that the emperor has plans for building his summer hom, Kuzcotopia, on the hilltop where Pacha and his family currently reside. He tries to talk Kuzco out of it, but the young emperor is spoiled and selfish, and dismisses Pacha without another word. Discouraged, he heads home with the gloomy prospect of telling him family and village that they're going to be evicted, with no idea of where to take them. When he returns home, he's surprised to find a llama on his cart, not only talking, but claiming to be Emperor Kuzco! Kuzco, having been transformed by his scheming advisor, Yzma, demands Pacha escort him back to the palace. Pacha refuses, unless Kuzco agrees to build his summer home somewhere else. Kuzco attempts to brave the jungle alone, but realizes that he can't do it alone, and promises the trusting Pacha that he will relocate his planned summer home. After a harrowing journey through the jungle, including more than one betrayal from Kuzco and more than one forgiveness from Pacha, the two reach the palace and defeat Yzma and her dim assistant Kronk. The two realize their journey has made them become friends, and Kuzco remains close friends with Pacha and his family, building a modest summer home near Pacha's place.

Pacha is voiced by John Goodman.

Pacha can be seen in The Emperor's New Groove, as well as in the 2005 direct-to-DVD release, Kronk's New Groove.

The love of Pacha's life is his beautiful wife, ChiCha, and their children Chaca and Tipo. Yzma and Kronk prove to be a fairly formidable foe for Pacha and the Emperor, but they're also pretty easily thwarted. Personally, Pacha's foe is the emperor himself, pre-change of heart. What I have to say...

Pacha is pretty much the all-around good guy. He's big and great, gentle with his loved ones and friendly and trusting. He's, in essence, everything Kuzco isn't (at first). His goodness is enough to rub off on Kuzco, which is good for pretty much everyone involved. This is an excellent film, and I've sort of already laid out what I think in Kuzco's page, but I'll say again that this is sort of the Disney movie for people who don't like Disney movies, since I haven't really met anyone who doesn't enjoy it. It's reminiscent of classic cartoons, it's a road comedy, a buddy movie, an all-around good story. 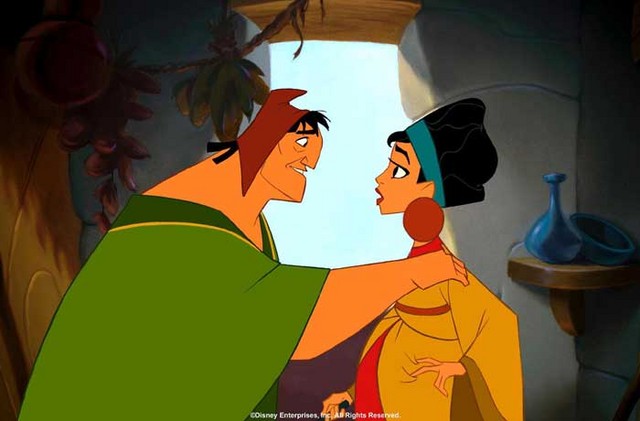 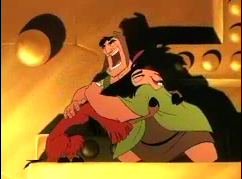 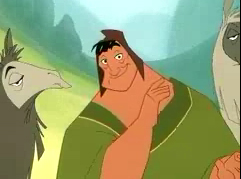 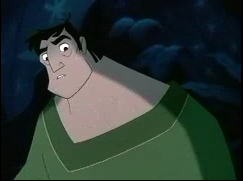 Quotes from Pacha and his kin

(Kuzco and Pacha are tied to a tree branch floating in a river)
Pacha: Uh-oh.
Kuzco: Don't tell me. We're about to go over a huge waterfall.
Pacha: Yep.
Kuzco: Sharp rocks at the bottom?
Pacha: Most likely.
Kuzco: Bring it on.

Pacha: Someday, you're gonna wind up all alone, and you'll have no one to blame but yourself.
Kuzko: Thanks for that. I'll log that away.

Pacha: We shook hands on it!
Kuzko: You know, the funny thing about shaking hands is... (wiggles hoofs) ...you need hands!

Tipo: (waking from a dream) Dad, look out!
ChiCha: Tipo, what is it?
Tipo: I had a dream that Dad was tied to a log and was careening out of control down a raging river of death!
ChiCha: It's all right, it's all right. It was just a dream.
Tipo: It was awful!
ChiCha: Calm down, Tipo. Your dad's fine. He just went back to the emperor.
Tipo: Oh, just like you told him to, because you're always right.
ChiCha: That's right.
Chaca: Well, in my dream, Dad had to kiss a llama.
Tipo: Yeah, like that would ever happen.
Chaca: It could.
ChiCha: Na-hah!
Chaca: Yeah-hah!
Tipo: Na-hah!
(they keep exchanging "Na-hah"s and "Yeah-hah"s at lightning speed)
ChiCha: Good night, kids.
Tipo, Chaca: Night, Mom!
(resume bickering as ChiCha blows out the lights)

(after telling Pacha that he intends to destroy Pacha's villiage and build "Kuzcotopia")
Pacha: But, but, um, where will we live?
Kuzco: Hmm. Don't know, don't care. How's that?

Pacha: We're on our honeymoon.
Waitress: Bless you for coming out in public.

Kuzco: When will you learn that all my ideas are good ones?
Pacha: Well, that's funny. Because I thought that you going into the jungle by yourself, being chased by jaguars, lying to me to take you back to the palace were all really *bad* ideas.
Kuzco: Oh, yeah. Anything sounds bad when you say it with that attitude.

Pacha: You know, I'm pretty sure I heard some singing on the hill next to us. In case you're interested.

Tipo: Dad! I ate a bug today!
Pacha: Oh! Was Mom baking again? Heh. Don't tell her I said that.
ChiCha: I heard that!

Pacha: Why did I risk my life for a selfish brat like you? I was always taught that there was some good in everyone, but, oh, you proved me wrong.
Kuzco: Oh, boo-hoo. Now I feel really bad. Bad llama.
Pacha: I could've let you die out there in that jungle, and then all my problems would be over.
Kuzco: Well, that makes you ugly and stupid.
Pacha: Let's end this.
Kuzco: Ladies first.

Pacha: For the last time, it was not a kiss.

Vote for Pacha as your favorite hero here!