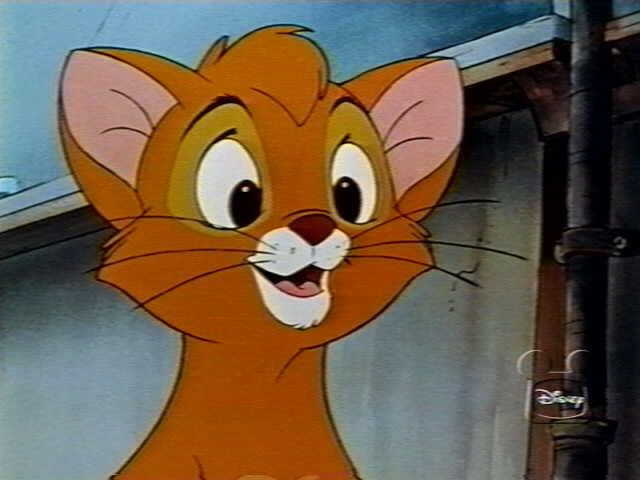 Based on Dickens's Oliver Twist, this film follows the disarmingly sweet Oliver, an orphan kitten, abandoned and left for whoever will take him. When no one takes the poor kid home, he's taught a little street savoir faire by the cool Dodger, a dog who doesn't eat cats (too much fur...). Oliver follows Dodger when the rascal refuses to share the sausages they snatched together, and finds a hovel of a bunch of stray dogs who steal for their master, Fagin, in order to help him repay his debts to the villainous loan shark, Sykes. Oliver joins the gang, but is soon found and adopted by a rich little girl, Jenny, who, lonely due to her negligent parents, finds the perfect companion in Oliver. He loves his new life, with the kind of love and attention he always dreamed of, but when the gang breaks in to steal him back to their gang, he's angry and frustrated. Dodger feels indignant, calls Oliver ungrateful, and says he can leave whenever he wants, secretly jealous of Oliver's good fortune and posh new housing. Fagin, good at heart, but desparate, decides to set a ransom for Oliver, sending a letter to the address on Oliver's nice, shiny new collar. Jenny appears in a dark and lonely alley with nothing but a piggy bank to try and buy back Oliver, but is kidnapped by Sykes, who tells Fagin to find the money or Jenny will get it. Oliver and Dodger lead the gang on a rescue mission to save Jenny, and in the end fight back Sykes and his dogs, and he meets a gruesome end on the subway tracks. Oliver and Jenny are reunited, and Dodger offers Oliver the honorary position as Vice President of their gang, of the Uptown District.

The villain in this film is Fagin's nemesis and loaner, Sykes. My personal thoughts and analysis...

This is a really fun film, and I've already sort of had my say on Dodger's page, but let me say that Oliver is an adorable character with massive amounts of appeal. He's a perfect sympathetic character, with just enough oomph to make him interesting. When Jenny adopts him, their relationship is a perfect example of a child and their pet, very believable. Everything about this film screams late 80s, but that's what makes it so charming. It's dated, a blast from the past, and it'll always be a sort of time capsule of pop culture. 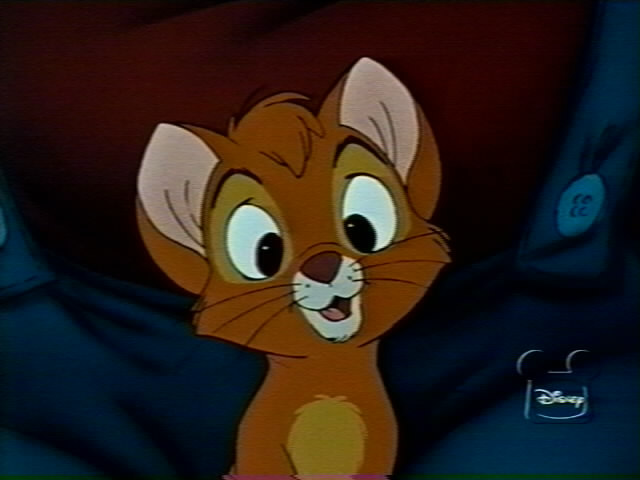 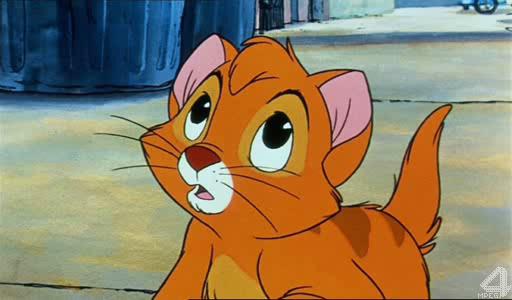 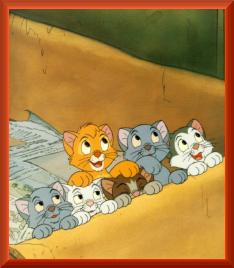 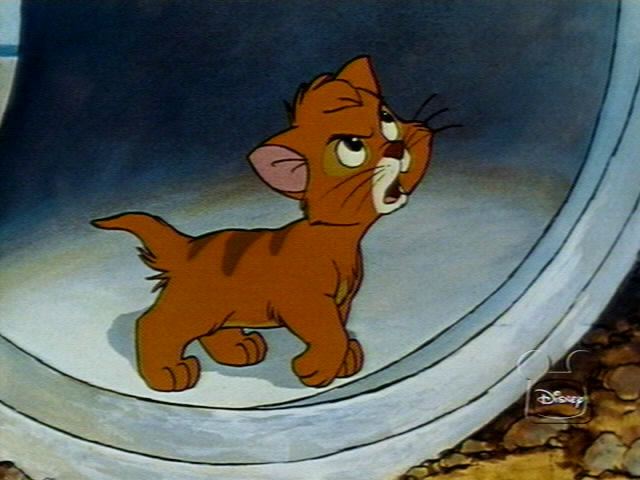 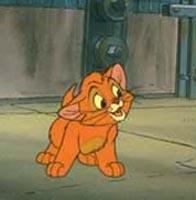 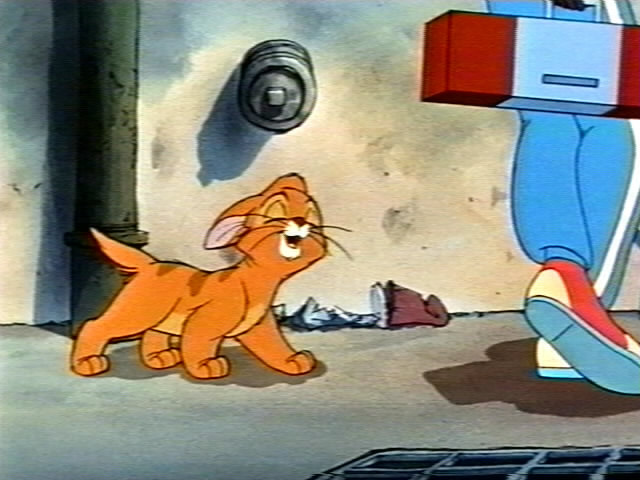 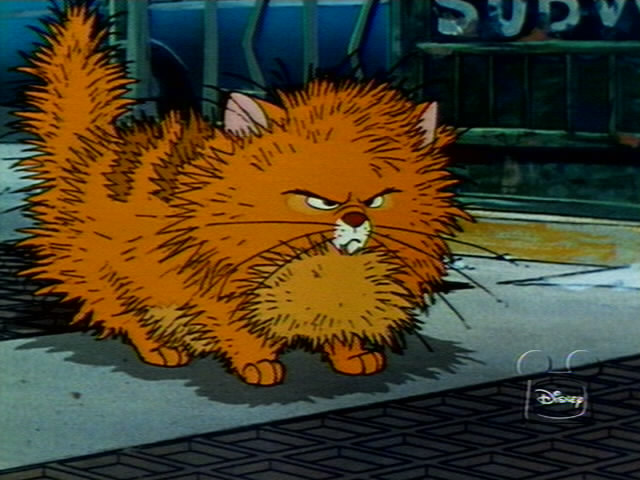 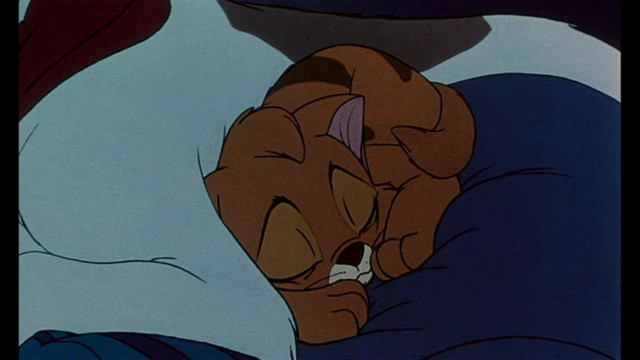 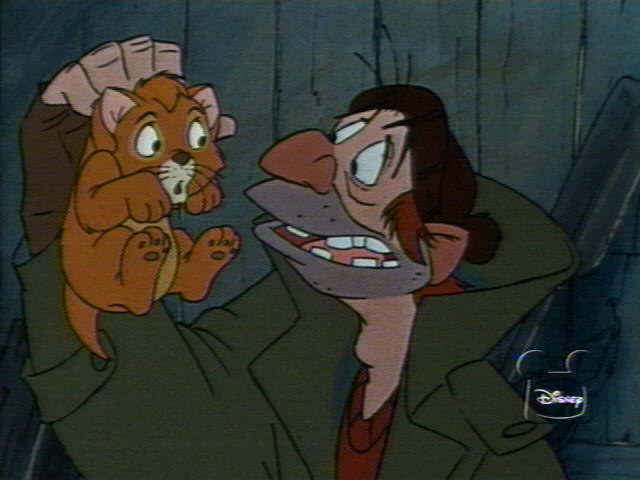 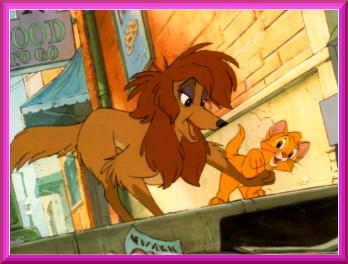 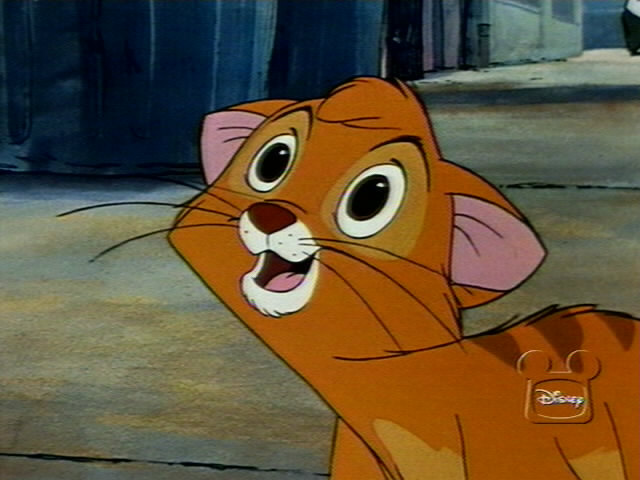 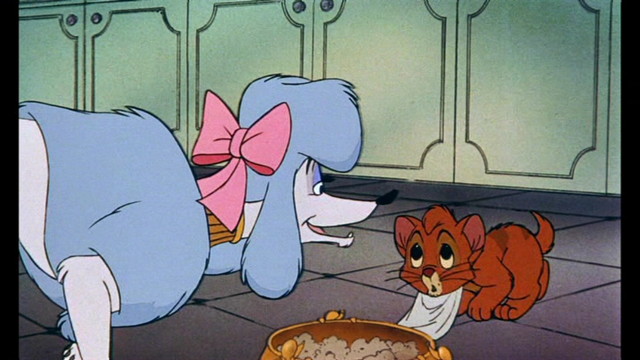 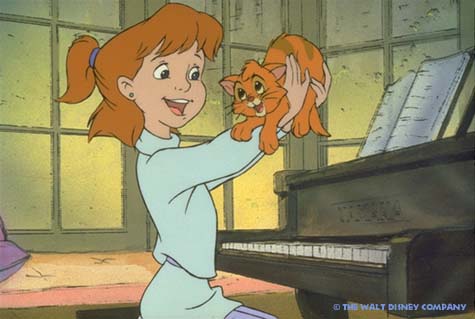 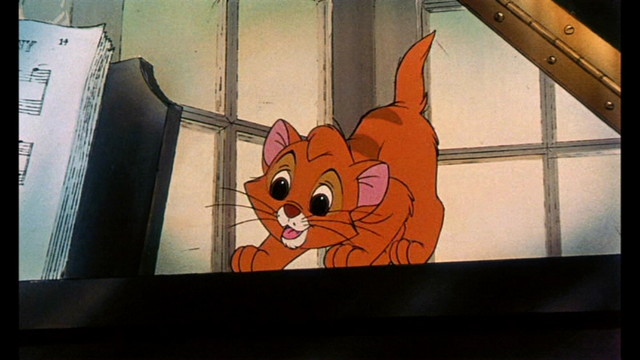 (after stealing the hot dogs)
Oliver: So when are we gonna eat?
Dodger: We?
Oliver: Yeah. I'm starvin'.
Dodger: Listen, kid. I hate to break it to ya, but the dynamic duo is now the dynamic uno.
Oliver: What do ya mean?
Dodger: What I mean is, our partnership is herewith dissolved.
Oliver: But, wait! Wait. You're not being fair!
Dodger: Fares are for tourists, kid. Consider it a free lesson in street savoir faire from New York's coolest quadruped.

(Georgette sees Oliver in the kitchen)
Georgette: I, um, hope you won't think me rude, but do you happen to know out of whose bowl you're eating?
Oliver: Yours?
Georgette: [sarcastically] Ooh! Aren't you a clever kitty? And do you have any idea whose home this is?
Oliver: I... thought it was Jenny's.
Georgette: Well, it may be Jenny's house, but everything from the doorknobs down is mine!

Vote for Oliver as your favorite hero here!