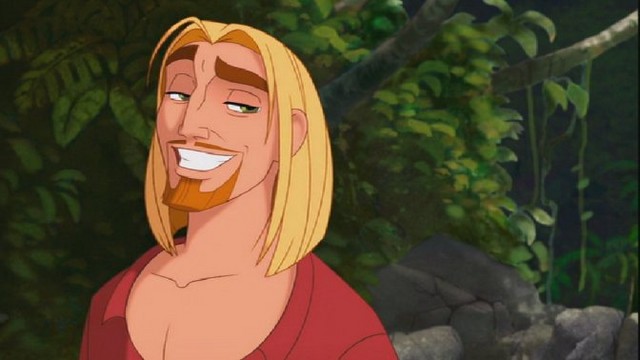 Let's be Gods, the perks are great
El Dorado on a plate
Local feelings should not be rebuffed

It's Tough to Be a God
John

Miguel is the shorter, stockier of the heroes in this excellent film, and is much less realistic, much more of a dreamer. Part of the best con team in Spain, Miguel and Tulio start out their adventure running from angry gamblers who have recently learned they've been playing with men who use loaded dice. They stage a swordfight and escape the mob, only to be chased by an angry bull. When they jump off a building into some water-filled barrels, they become inadvertent stowaways on Cortez'z ship bound for the Americas. He informs the stowaways they'll be dropped off in Cuba to work in the plantations and be flogged for the rest of their lives. When the two plan a makeshift escape plan, utilizing the help of Cortez's horse Altivo, they steal a longboat and try to row back to Spain. With no food or water, the two (and Altivo, who managed to land on their escape boat) are stranded at sea, sure they're facing their doom, until they land on an island and Miguel realizes it's the island whereon lies the legendary city of gold, El Dorado. Remains of sailors past litter the beach, but Miguel, who managed to scrape the map before they ran from the gamblers, is sure this is their fate, to find the City of Gold. Tulio, practical and skeptical, is sure the map is a fake, but reluctantly follows Miguel on his quest to find the city. When they end up at a great big rock featuring an engraving of the gods who founded El Dorado and their steed, and are cornered by some natives, they are mistaken for the gods, returned to the land they created. A girl, attempting escape with a gold pot, claims she went to bring an offering to them, and that her only wish is to serve the gods. She's onto their game, and offers to help them through their unplanned masquerade if they promise her a way back to the mainland with them. They agree, grudgingly, as they seriously lack the expertise and the knowledge they'll need to pass as gods. Tzekel-Kan, the bloodthirsty speaker for the gods, and the Chief butt heads about how to treat the gods, but Tulio and Miguel don't really mind as long as they can get their hands on the massive amounts of gold that fill the temples. Biding their time while a ship is being built, Tulio orders Miguel to stay in the temple to avoid blowing their cover, but Miguel's intense curiostity about the glimmering city and its inhabitants proves to strong, and Chel sends him out, promising to cover for him. Miguel gets to know the people of El Dorado, and before long falls in love with the city and all who live there. He walks in on Tulio later to find him and Chel locked in a passionate kiss, just in time to hear Tulio say, "Forget Miguel". Misunderstanding, Miguel is furious with his friend and partner, and decides to stay in the city. Meanwhile, the Chief and Tzekel-Kan are both onto the boys and their con, and while the Chief and Miguel have a comfortable relationship, and the Chief says Miguel can stay if he wants, Tzekel-Kan has other ideas. He's determined to expose the facade and have the imposters executed. The expedience of their escape is crucial, and when Miguel informs Tulio he's not leaving, they have a fight, reprising their show for the gamblers, but Miguel's feelings this time are genuine. He feels betrayed and hurt by Tulio's harsh betrayal of him and their plan for a woman, and he's genuinely offended at Tulio's disregard for his feelings. Tulio, completely unaware of Miguel's animosity, plays along, but in the end, they both knock out Tzekel-Kan. Unfortunately, Tzekel-Kan has bigger plans as he has revived a jaguar statue that goes on a rampage across the city trying to demolish the boys. Ultimately, Tzekel-Kan is plunged into the whirlpool that, according to custom, goes to the spirit world, when really he comes out on the other side of a waterfall, where he runs into Cortez, searching for the city of gold himself. Scouts bring news to the chief about the Spanish invaders searching for the city, and inform El Dorado that Tzekel-Kan is leading them. Tulio and Miguel are forced to put aside their issues and confront the problem, blocking forever the entryway to El Dorado so Cortez and his men cannot enter. They leave, in the process destroying their boat, and nearly all the gold they brought along, but with Chel along for the ride, they all climb aboard Altivo and go on to whatever adventure awaits them next.

Miguel is voiced by the very British Kenneth Branagh. 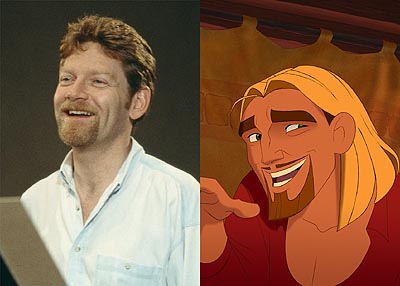 Miguel doesn't have much of a love story in this film, but rather falls in love with the people and culture of El Dorado. While Cortez presents a daunting overall threat, the real villain of this story is Tzekel-Kan, the speaker for the gods. When the "gods" appear, and they no longer need someone to speak for them, things get ugly... My personal thoughts and analysis...

I personally think all of Dreamworks's animated films (2D animated films, that is... You can keep Shrek and Shark Tale) have been masterpieces, and this one is no exception. The interplay between Tulio and Miguel is a delight, and the script and writing are top-notch. Visually, this is a simply dazzling film. The frames in El Dorado practically sparkle, and I really can understand why Miguel falls in love with the place--it's beautiful, and its people are pleasant and peaceful. It's an excellent, funny, touching film about friendship and forgiveness. For more information, check out Tulio's page. 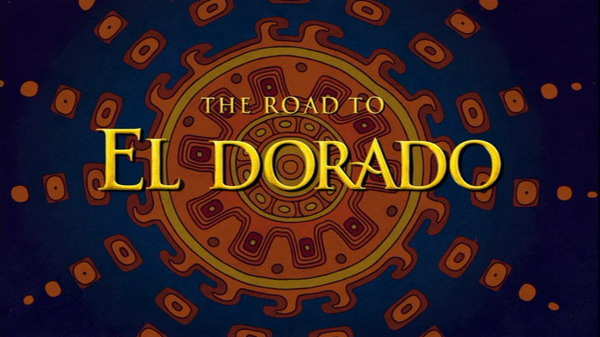 Pictures of the Dreamer 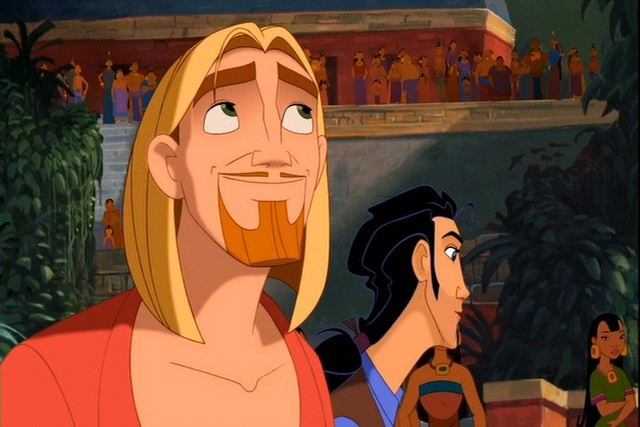 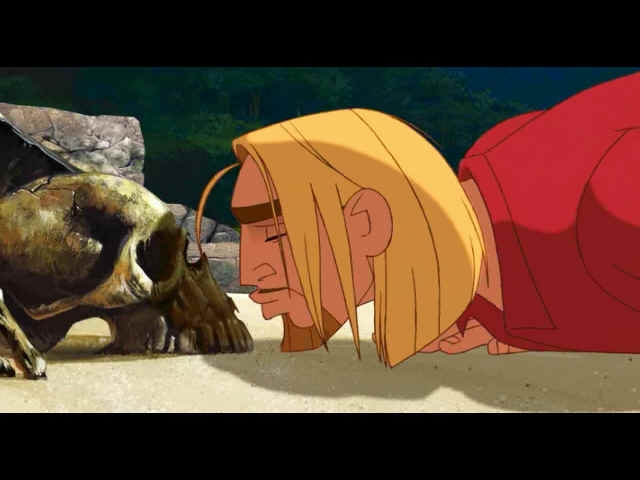 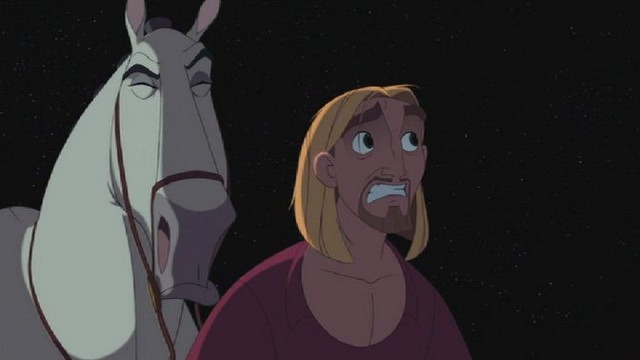 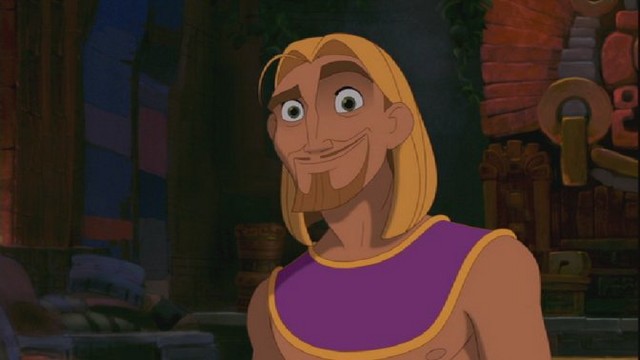 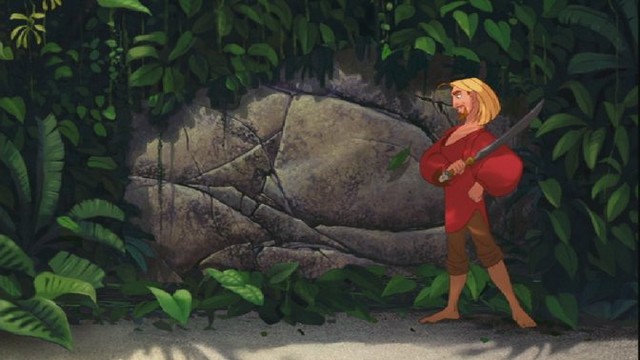 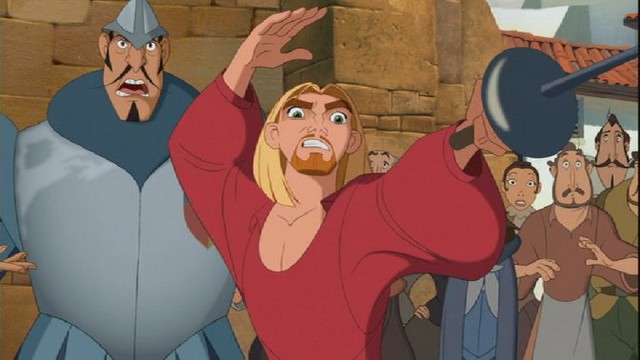 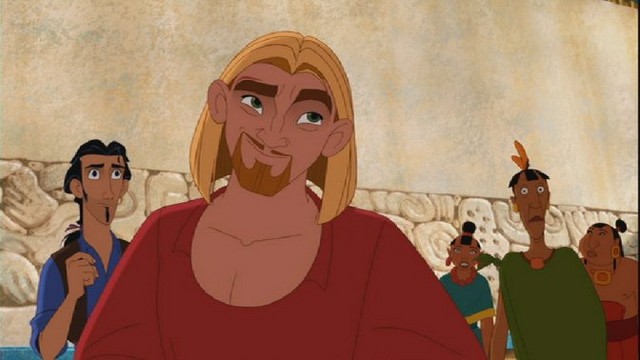 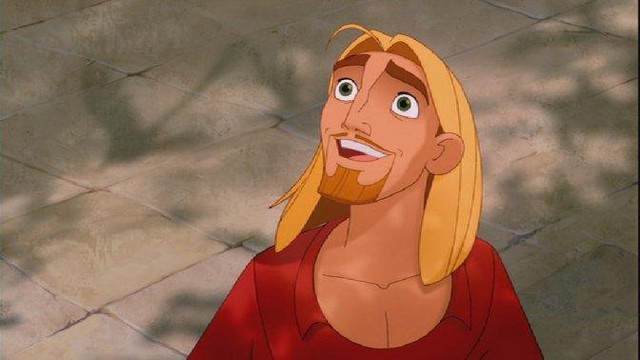 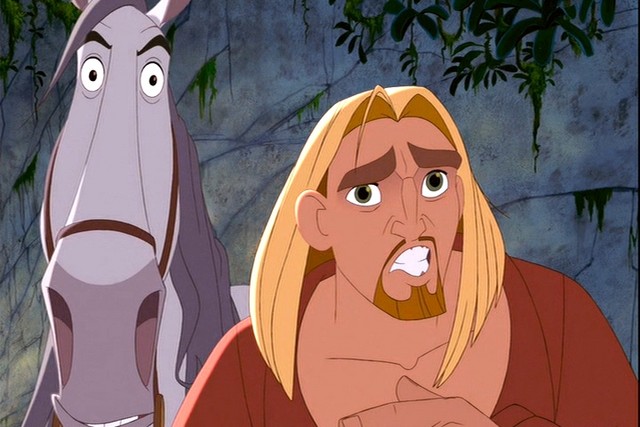 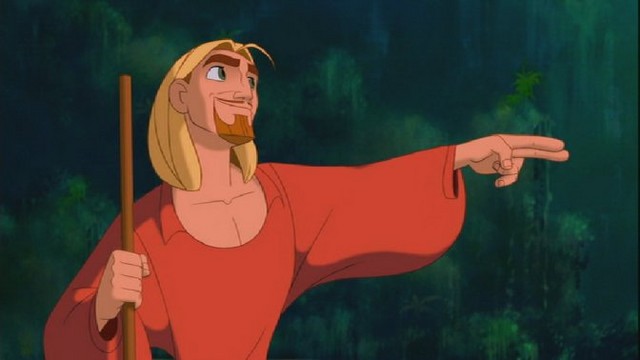 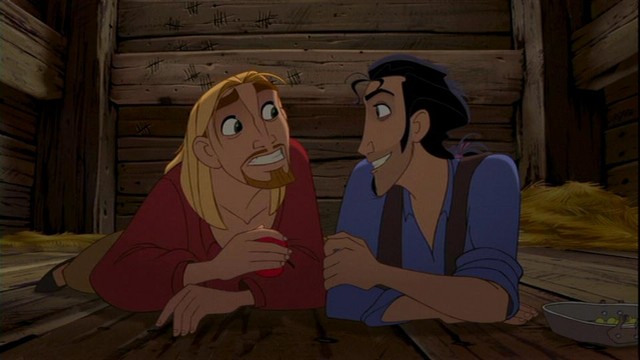 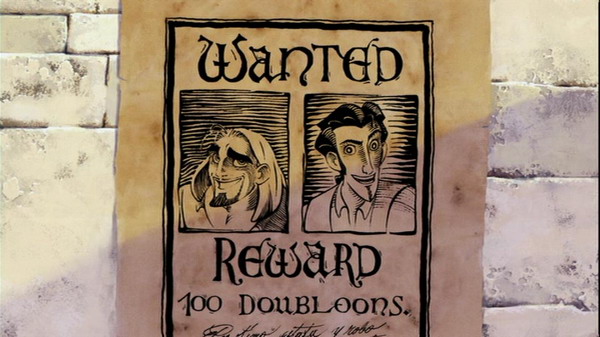 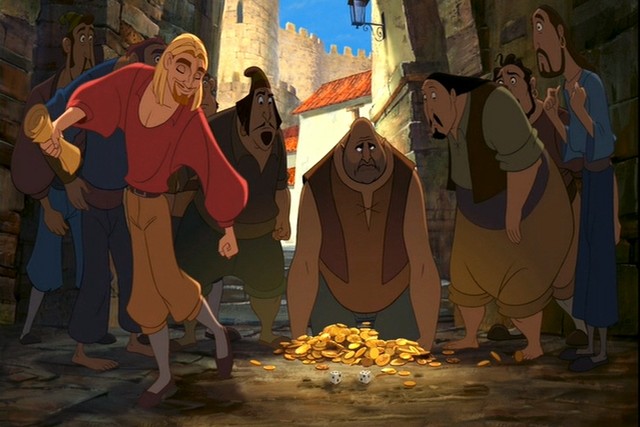 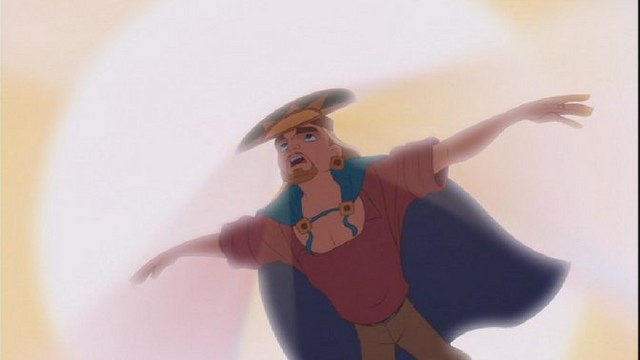 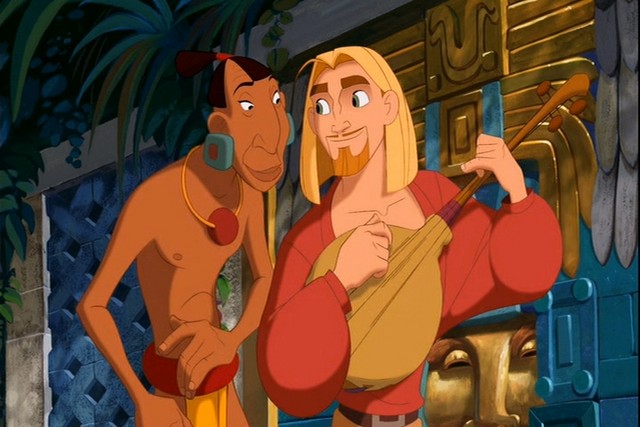 Miguel: You fight like my sister!
Tulio: I've fought your sister. That's a compliment.

Miguel: It really is the map to El Dorado!
Tulio: You drank the sea water, didn't you?
Miguel: Oh, come on!
Tulio: I'm not coming on!

(Miguel and Tulio are stranded in the boat, together with Altivo)
Miguel: Tulio, did you ever imagine it would end like this?
Tulio: The horse is a surprise...
Miguel: Any... regrets?
Tulio: Besides dying? Yeah. I never... had enough... gold
. Miguel: My regret, besides dying, is... our greatest is over before it began, and no one will even remember us.
Tulio: Well, if it's any consolation, Miguel, you... made my life... an adventure.
Miguel: And if it's any consolation, Tulio, you made my life... rich.

Tulio: What's happening here?
Miguel: We're both in barrels - that's the extent of my knowledge.

Miguel: Look! The map to El Dorado! This could be our destiny! Our fate!
Tulio: Miguel, if I believed in fate, I wouldn't be playing with loaded dice.

(Tulio is banging his head against the wall in the brig)
Miguel: So uh, how... how's the escape plan coming?


Miguel: The trail we blaze! (Miguel cuts a hole in a wall of vines and branches to reveal a wall of solid rock) ... THAT trail that we blaze!

Miguel: I am Miguel.
Tulio: I am Tulio.
Miguel: Together we are Miguel and Tulio!

Tulio: You're buying your own con!
Miguel: Well at least I'm not dating mine.

Miguel: Tulio, you worry too much

Tulio: (sighs) Well, it was nice working with you, partner.
Miguel: Tulio, I just want you to know... I'm sorry about that girl in Barcelona.

Chel: Oh, then I suppose you'll be wanting these back? (produces dice in her hand)
Tulio: (pats pockets, shocked) Hey... how'd you get those?
Miguel: (raising eyebrows) WHERE was she KEEPING them?

Vote for Miguel as your favorite hero here!

For more on Miguel, check out the Links page or head back to the Heroes homepage.