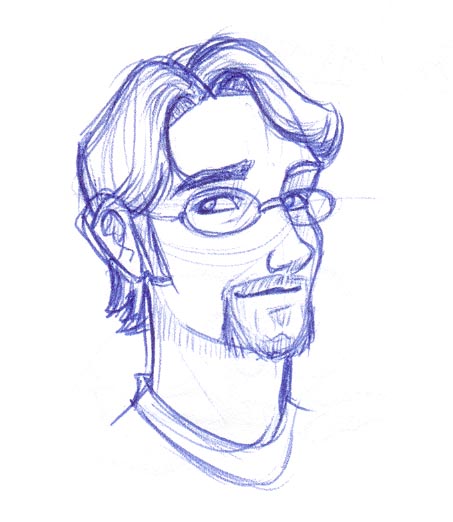 Well, hello to you all out there in cyberspace! My name's Drew Graham and I started this page all the way back in 1998, mainly because the Heroines page seemed like such a good resource, I thought the guys deserved one too. There have been a lot of other pages for Animated Heroes, but most of them have fallen into various states of disrepair, and since I'm something of an insufferable know-it-all when it comes to animation, I thought I would give this another go. I see a lot of myself in a lot of the guys featured on this website, and having grown up with several of them in my mind and in my sketchbook, this little project sort of means something to me. I've also just decided this is going to be a strange, basic sort of blog that I'll update now and then with my thoughts, etc. (Whether you want me to or not!!! Unless, of course anyone has any serious objections and can outline them rationally and reasonably...)

So, who is the brilliant mastermind behind the new and improved Animated Heroes?...

I was born and raised in Utah, and I quite love it here. Life, etc. might lead me somewhere else, and I'm definitely open to that, but I think Utah is a wonderful place to raise a family and grow up, and I've more than once thought (and was confirmed by a total stranger) that much of Utah looks rather like the fields of the kingdom of Rohan (from The Lord of the Rings). The rest is desert, but I'm satisfied to know there are mountains and salty lakes around.

I recently graduated with a BFA in animation from Brigham Young University, and am currently feeling out the industry. Okay, this is my website, so I'm going to rant now... I'm afraid the industry I'm about to step into isn't the industry I was studying to be a part of. I can appreciate 3D animation, and I took some required classes at school, but I think there's just something much more personal and human about hand-drawn animation, something nostalgic, something charming, that the pristine, processed, albeit polished and lovely look of 3D could never achieve (try though it might, and it does come rather close at times). I would really rather illustrate or do storyboarding or character design than troubleshoot animation one frame at a time. One day computers will replace even the animators, I imagine! In any case, I'm a little bummed at the current animation industry, but I do have faith in 2D animation as an artform. Like the head of my department at school used to say, just because photography was invented, it doesn't mean they got rid of portrait painting...

As for my interests, I've been drawing for as long as I can remember, and it's in the last decade become a practice of mine to constantly carry a sketchbook with me, as I've more than once been unusually inspired, and not had any way to put it down! (I have a rather extensive gallery online, see the link at the bottom of the page.) I love good literature (see my mention of The Boy Who Lived in a couple sentences), and I've quite often found myself lost in the words of Dickens, Bronte, Austen, Melville, as Hugo, as well as Alexander, Lewis and Tolkien, but I have to say my heart goes out most to Thomas Hardy and J.K. Rowling. I've always been quite a fan of Disney films, having fallen head-over-heels in love with Glen Keane's Ariel in 1989 (a pivotal moment in my animation ambitions). I was raised in a pretty musical family, and music is something I couldn't part with if I tried. I played trumpet and french horn in school, and piano all while I was growing up, and today my astonishment at music continually grows (I'm constantly amazed that after all these thousands of years, people are still writing original music, all out of the same seven notes). I'm rather fond of musical theater, and have participated in several shows. I have a rather unreasonable interest in Harry Potter for someone of my age. I fought the hype for ages, not always having been one to follow the crowd, but I finally gave into my little sister's urging, and within a week had read the first four books (the next two years waiting for Harry Potter and the Order of the Phoenix were sheer torture). I daresay I have since become one of the world's biggest (but not scariest) fans. Well, you can see for yourself, I suppose...

My faith and family are extremely important to me. I was raised in the LDS church, and I'm pretty close to my family, both of which I count as immeasurably positive and uplifting blessings in my life.

I'm somewhat involved in a couple of organizations, including the Standard of Liberty Foundation and Tidal Wave Books, for whom I have recently finished a book (should be out around Spring 2006).

Go back home, or check out my gallery:

The podcasts I most enjoy are: