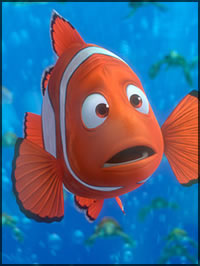 Marlin is the reluctant hero from Finding Nemo (2003).

Marlin is voiced by Albert Brooks.

Marlin sadly loses his wife, Coral, to a barracuda in the opening sequence. Marlin's major nemesis is his own fear and overprotection of Nemo, and overcoming it. He also has some run-ins with a blood-crazed shark and a pod of silent-but-deadly jellyfish. My personal thoughts and analysis... 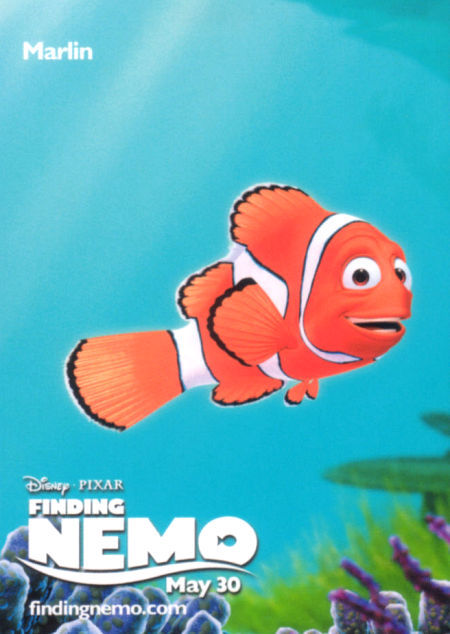 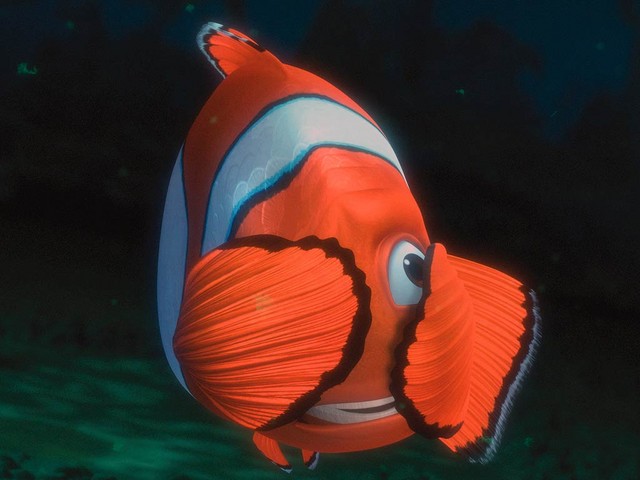 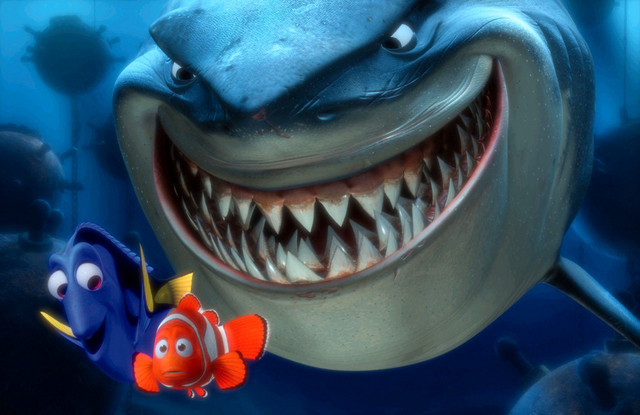 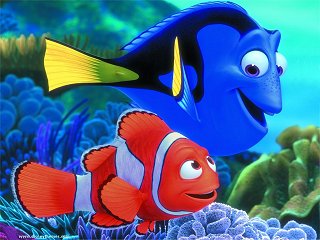 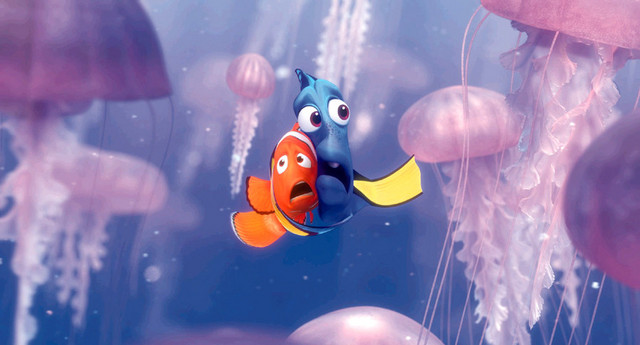 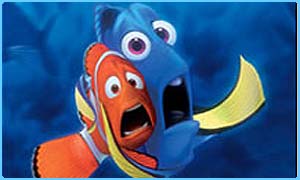 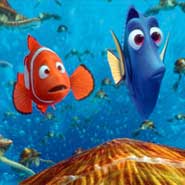 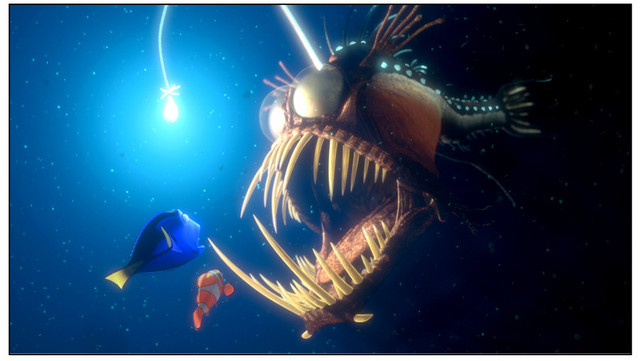 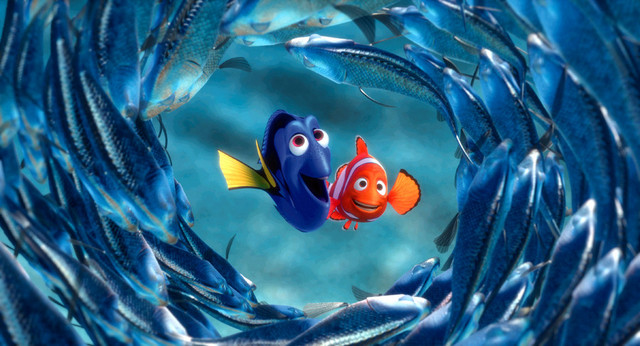 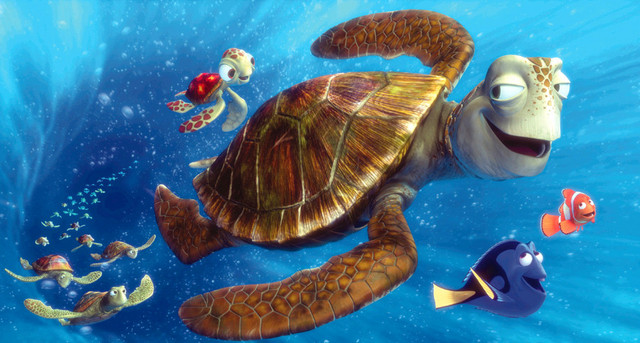 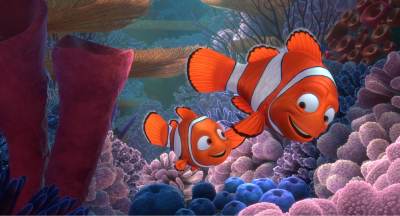 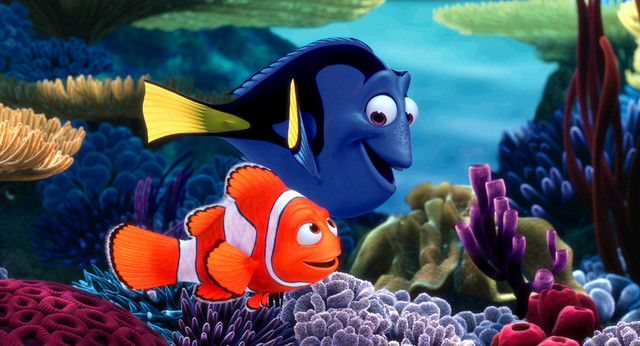 Crush: Okay. Squirt here will now give you a rundown of proper exiting technique.
Squirt: Good afternoon. We're gonna have a great jump today. Okay, first crank a hard cutback as you hit the wall. There's a screaming bottom curve, so watch out. Remember: rip it, roll it, and punch it.
Marlin: It's like he's trying to speak to me, I know it. (to Squirt) Look, you're really cute, but I can't understand what you're saying. say the first thing again.

Marlin: Now it's my turn. I'm thinking of something dark and mysterious. It's a fish we don't know. If we ask it directions, it could ingest us and spit out our bones.
Dory: What is it with men and asking for directions?
Marlin: I don't want to play the gender card right now. You want to play a card, let's play the "let's not die" card.

Crush: Oh, he lives. Hey, dude!
Marlin: Oh... What happened?
Crush: Saw the whole thing, dude. First you were all like "whoa", and we were like "whoa", and you were like "whoa..."
Marlin: What are you talking about?
Crush: You, Mini-Man, takin' on the jellies. You've got serious thrill issues, dude. Awesome.
Marlin: Oh, my stomach. Ohh.
Crush: Oh, man. Hey, no hurling on the shell, dude, ok? Just waxed it.
Marlin: So, Mr. Turtle?
Crush: Whoa, Dude. Mister Turtle is my father. The name's Crush.
Marlin: Crush, really? OK, Crush. I need to get to the East Australian Current. EAC?
Crush: (Laughing) Oh, dude. You're ridin' it, dude! Check it out!

(Marlin and Dory are racing through the jellyfish forest. Marlin starts talking to himself)
Marlin: So, we're cheating death now, that's what we're doing, and we're having fun at the same time, I can do this, just be careful...
Dory: Yeah, be careful I don't make you cry when I win!
Marlin: Oh I don't think so!
Dory: Give it up old man, you can't fight evolution, I was built for speed!
Marlin: The question is Dory, are you hungry?
Dory: Hungry? Why?
Marlin: 'Cause you're about to eat my bubbles!

Marlin: (Inside the whale) I have to get out of here! I have to find my son! I have to tell him how old sea turtles are!

Dory: I saw a boat.
Marlin: You did?
Dory: Yeah, it went by not too long ago. Follow me. (few seconds later) Would you quit it? What, the ocean isnt big enough for you or something like that? You got a problem? Huh? Do ya, do ya, do ya? You wanna piece of me? Yeah, yeah! Ooh, I'm scared now! What?
Marlin: What? You said you saw a boat.
Dory: A boat?
Marlin: YES.
Dory: Hey, I've seen a boat. It went by not too long ago. It went... this way. It went this way.
Marlin: Wait a minute, you already told me which way the boat went.
Dory: I did? Oh, no...

Nemo: Hey dad! Maybe when I'm at school, I'll see a shark.
Marlin: I highly doubt it.
Nemo: Have how ever met a shark?
Marlin: No, and I don't plan to.
Nemo: How old are sea turtles?
Marlin: Sea turtles? I don't know.
Nemo: Sandy Plankton from next door, he says they live to be a hundred years old.
Marlin: Well, if I ever meet a sea turtle I'll ask him, right after I'm done talking to the shark.

Dory: How about we play a game?
Marlin: All right.
Dory: Okay, I'm thinking of something orange, and it's small...
Marlin: It's me.
Dory: Right! (Later) I'm thinking of something orange and small...
Marlin: Me again.
Dory: All right, Mr. Smartypants... (Later) ... It's orange and small, and has stripes...
Marlin: Me, and the next one - just a guess - me.
Dory: Okay, that's just scary.

Marlin: Now, what's the one thing we have to remember about the ocean?
Nemo: It's not safe.
Marlin: That's my boy.

Nigel: (quietly) Okay, don't make any sudden moves. Hop inside my mouth... if you want to live.
Marlin: Hop in your mouth, huh? And how does that make me live?
Seagulls: Mine?
Nigel: Because I can take you to your son.
Marlin: Yeah, right.
Nigel: No, I know your son. He's orange and has a gimpy fin on one side.
Marlin: That's Nemo!

(slowly and deeply, imitating the whale)
Dory: Mooo... Weeee neeeed...
Marlin: Dory?
Dory: ...tooo fiiind hiiis sooon.
Marlin: What are you doing? Are you sure you speak whale?
Dory: Caaaan yoooou giive uuuus direeeeectioooons?
Marlin: Dory! Heaven knows what you're saying! See, he's swimming away.
Dory: Cooome baaaaack.
Marlin: He's not coming back. You offended him.
Dory: Maybe a different dialect. Mmmmoooooowaaaaah...
Marlin: Dory! This is not whale. You're speaking like, upset stomach.
Dory: Maybe I should try humpback.
Marlin: No, don't try humpback.
Dory: Woooooo! Woooooo!
Marlin: Okay, now you really do sound sick.
Dory: Maybe louder. Rah! Rah!
Marlin: Don't do that!
Dory: Too much orca. Did it sound a little orca-ish to you?
Marlin: It doesn't sound orca. It sounds like nothing I've ever heard!

Marlin: How do you know if they're ready?
Crush: Well, you never really know, but when they know, you know, y'know?

Marlin: Crush, wait. How old are you?
Crush: Hundred and fifty, and still young, dude! Rock on!

(Dory and Marlin are in pitch darkness looking for the mask)
Dory: Ahh. Something's got me.
Marlin: That's just me.
Dory: Who are you?
Marlin: (exasperated) Who am I? Who do you think?
Dory: Are... are you my conscience?
Marlin: (sighs) Yes, I'm your conscience. We haven't spoken for a while. How are you?
Dory: Eh, can't complain.
Marlin: Good. Now, do you see anything?
Dory: (angler fish's light approaches) Yeah, I see a light.
Marlin: A light?
Dory: Yeah.
Marlin: Yeah, I see it too.
Dory: Hey conscience, am I dead?
Marlin: It makes me feel happy, which is a big deal for me.
Dory: It's so pretty. I want to touch it...
(she does; the light bobs quickly away)
Both: Ooh.
Marlin: Hey, come back. Come on back here. I'm gonna get you.
Dory: Come here.
Marlin: (singing) I'm gonna swim with you...
Dory: I'm gonna get you. I'm gonna get you.
Marlin: (singing) I'm gonna be your best friend...
(a big scary fish looms into view)
Marlin: Good feelings gone...
Both: AHH!!!!!

(after whale blows Marlin and Dory out)
Marlin: THAAAANKKK YOUUUUU SIRRRRRRR.
Dory: Wow. I wish I could speak whale...

Marlin: You think you can do these things, but you just can't, Nemo.

Marlin: Why didn't you tell me you could read?
Dory: I can read? I can READ.

Marlin: There was this mollusk, and he walks up to this sea cucumber. Normally, they don't talk, sea cucumbers, but in a joke everyone talks. So the sea mollusk says to the cucumber... (blank stares)

Marlin: ...and the sea cucumber turns to the mollusk and says, "With fronds like these, who needs anemones?" (Everyone laughs)

Marlin: The dropoff? They're going to the dropoff? What - what are you insane? Why not just fry them up now and serve them with chips?

Marlin: The water's going down. It's half-empty.
Dory: Hmm... I'd say it's half-full.
Marlin: Stop that!

Marlin: What if they don't like me?
Coral: Marlin!
Marlin: No, really.
Coral: There's over 400 eggs, odds are, one of them is bound to like you.

Marlin: How do you know that nothing bad won't happen?
Dory: I don't!

(Crush is introducing Marlin to his son)
Crush: Oh. Intro- Jellyman, offspring. Offspring, Jellyman.
Dory: Excuse me? Whoo-hoo! Little fella? Hello! Don't be rude. Say hi.
Marlin: Ha. Hello.
Dory: His son Bingo...
Marlin: Nemo.
Dory: ...Nemo was taken to, um...
Marlin: Sydney
Dory: ...Sydney, yeah. And it's really, really important that we get there as fast as we can, so can you help us out?

(Nemo and Marlin are hugging)
Nemo: Uh, Dad, you can let go now.
Marlin: How many stripes do I have?
Nemo: Dad, I'm fine...
Marlin: Answer the stripe question.
Nemo: Three.
Marlin: SEE? Something's wrong with you. (he counts) I have one... two... three? That's all I have?

Marlin: Something's wrong with you, really.

Marlin: I didn't come this far to be breakfast.

Marlin: He's my son, he was taken by these divers...
Dory: Oh my, you poor fish.

Marlin: Of course he wants us to move over there. That's EATING US. (wagging his tail on the whale's taste bud) How do I taste, Moby, huh? DO I TASTE GOOD?

Dory: Hey, what's wrong?
Marlin: What's wrong? While they're busy doing their little impressions, I'm miles from home with a fish who can't even remember her name.
Dory: Boy, I bet that's frustrating.
Marlin: Meanwhile, my son is missing.
Dory: Your son Chico?
Marlin: Nemo.
Dory: Right. Got it.
Marlin: But it doesn't matter, because no one in this entire ocean is going to help me.
Dory: Well, I'm helping you.

Crush: Your exit's coming up, man.
Marlin: Where? I don't see it.
Dory: Right there. I see it.
Marlin: You mean the swirling vortex of terror?
Crush: That's it, dude.
Marlin: Of course it is.

Nemo: Dad, you're not gonna freak out like you did at the petting zoo, are you?
Marlin: Hey, that snail was about to charge.

(Marlin and Dory are arguing about whether or not they should go over the trench)
Dory: Come on, trust me on this one.
Marlin: Trust you?
Dory: Yes, trust, it's what friends do.

(Nemo and Marlin are heading off to Nemo's first day of school, they stop at a busy traffic street)
Marlin: Wait, wait... (Red fish darts out and uses its color as a stop light, Nemo and Marlin cross) Hold my fin, hold my fin!

Vote for Marlin as your favorite hero here!