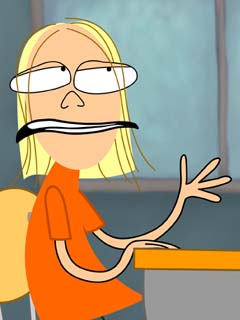 Kevin Harnisch is the hero of the TV series O'Grady (2004-present).

Kevin goes to O'Grady high, and spends most of his time with his best friend Harold, and Beth and Abby, two girls that he pretends to have a serious dislike for. Kevin feels like he's a master at anything he tries, but more often than not manages to mangle his plans even beyond his own recognition. Having grown up with seven older brothers, Kevin thinks he has O'Grady (and all of its complex inner-goings-on) figured out, but more often than not, he realizes that he's pretty much clueless, although he would never let on. Kevin isn't really popular, nor is he unpopular, he and his friends are sort of that middle class that can just cross the line either way, but not dive in. He's not particularly well-liked or handsome, but he's tight with his group. He's not a genius, and by no means the top of his class, but he's witty and fairly clever. Always cool and collected, Kevin never lets his emotions control him. He makes sure everyone knows that he has the situation under control. Kevin does so well at concealing his feelings for Abby that she would never know it if it weren't for isolated incidents of tenderness toward her. Kevin is paired with exchange student Iris when they are required to take care of a robot baby. He is one half of the band BrainFart (on guitar, while Harold plays drums). Kevin and his friends spend their days at school harassing the perpetual substitute teacher Mr. Lipschitz and the "acting principal" Dr. Myers. Not only does Kevin have to battle the usual high school drama, including his on-again, off-again crush on Abby, Kevin and his classmates have to face the Weirdness regularly, a strange phenomenon that plagues O'Grady differently each time it manifests itself. From teleportaional yawns to people behaving like cats, from walking street signs to clones, from thought bubbles expressing people's true feelings to random music setting the tone of the scene, the Weirdness can appear in any way, shape or form, and the residents of O'Grady generally have to just wait it out, unless they can (usually inadvertently) discover how to rid themselves of it, temporarily. Kevin was once even forced to be the unfortunate bearer of a mullet, and a weak excuse for a mustache. Kind of a mix between Friends and The Twilight Zone, with an animation style reminiscent of Adult Swim's Home Movies or Aqua Teen Hunger Force, O'Grady is a clever, interesting show with stylized animation and great writing, but the real saving grace of the show is the characters and their interaction.

Kevin maintains a serious love-hate relationship with Abby Wilde (and is frustrated with her infatuation with the good-looking but clueless Pete Klesko). Kevin's biggest nemesis is probably himself, especially when his master plans go awry, not to mention his constant battle against not only high school, but also the Weirdness. 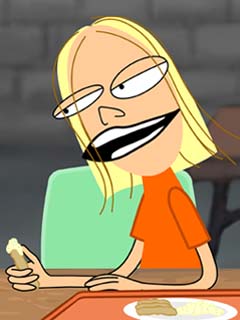 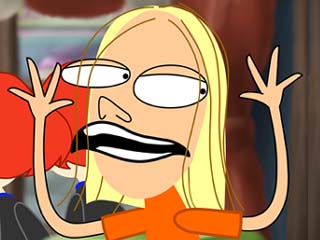 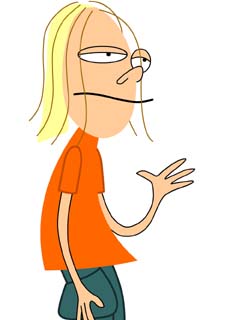 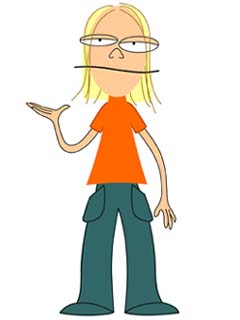 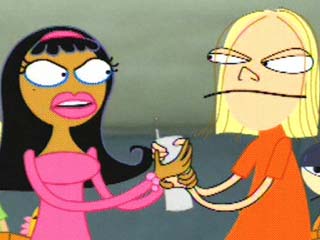 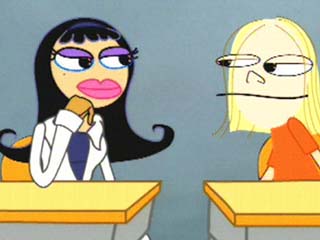 Abby: (to Kevin) It's not a mole, its a beauty mark.
Kevin: Whatever... nice mole comrade.

Kevin: Alright, Harold, your first phone number. You should get this framed.
Harold: Already had it photocopied.

Kevin: (to Abby and Harold) Vegeterians are just mad that they can't eat meat.

Kevin: Look what you did, Abby. This string was the last straw... that you broke... which was the last... straw. You know what I mean!

Kevin: See anyone look up?
Abby: No, did you?
Kevin: No, truce?
Abby: Truce.
Kevin: I call roof.
Abby: I call fire escape. Roof's that way.
Kevin: Fire escape's that way. I got the fire escape!
Abby: I got the roof!
Kevin: See ya tommorow!
Abby: Good luck!

Abby: Kevin, what are you doing?!
Kevin: I'm eating!
Abby: Off the floor?!
Kevin: What? It's not dirty unless it stays there for like an hour (eats food from the floor)
Abby: Kevin, you are so disgusting!
Kevin: Mmmm, turkey!
Abby: They don't even serve turkey here!
Kevin: They don't?
Abby: No, spit it out!
Kevin: Okay, (spits into his hand)
Abby: Eww, not in front of me!
Kevin: Okay, I'll just put it back into my mouth (puts it back into his mouth)
Abby: Eww! Kevin: That's good turkey!

Dr. Myers: Wow, Kevin! How do you get the street signs to obey you? Show me your mastery!
Kevin: Well, Dr. Myers, you just ask them.
Dr. Myers: Is that all?
Kevin: Yeah, well, they're public service signs, they're here to help.

Kevin: Beth, your butt is ringing.

Vote for Kevin as your favorite hero here!