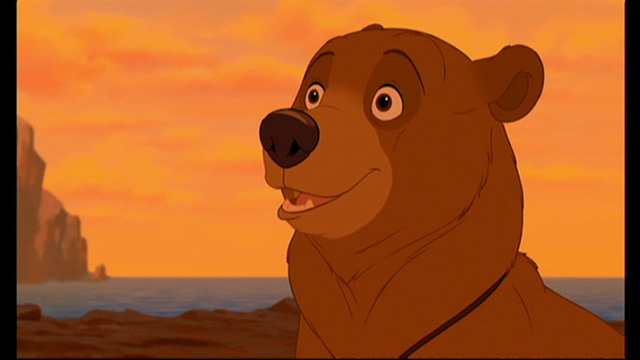 Brother Bear, I let you down
You trusted me, believed in me
and I let you down
Of all the things I hid from you
I cannot hide the shame
And I pray someone, something will
come, to take away the pain

There's no way out of this dark place
No hope, no future
I know I can't be free
But I can't see another way
I can't face another day


No Way Out
Collins

Kenai is the reluctant hero from Brother Bear (2003).

Kenai starts out as a young, strapping, and impetuous Inuit man, growing up with his older brothers Sitka and Denahi in the early Ice Age, hunting, fishing, kayaking, and having the usual brotherly scuffles. He's preparing for his totem ceremony, the legendary moment when the spirits reveal a young man's personal and specific totem, a symbolic animal and attribute that will guide them through their life, helping them make decisions and follow their path. When Kenai is given the Bear of Love, he's disappointed, having hoped he would get a totem indicating something about his courage, strength or power, and having a general dislike for bears as it is. Tanana, the tribe's mage-like figure, tells him that his totem will reveal itself in the future. When Kenai discovers the fish he tied up for the feast that night has been taken by a bear, he sets out to find and kill the animal. He finds himself confronted with a giant grizzly, and is nearly mauled, when his brothers appear to help him fight off the attack. Sitka sacrifices himself, jabbing his spear into the edge of an iceberg cliff, falling with the edge of the cliff and the bear, keeping his younger brothers safe. Sitka doesn't survive the fall, but the bear is spied wandering away from the lake at the bottom of the cliff. Kenai sets out to find and kill the bear again when Denahi says that he doesn't blame the bear for Sitka's death. Denahi understands that killing the bear won't bring back Sitka, and revenge is a poor motivation for any actions. His anger further fueled at taking the blame for his older brother's death, Kenai sets out alone. He encounters the bear, and manages to kill it. The spirit of Sitka appears, regards Kenai with disappointment, and in a moment of magic and a divine plan, Kenai is transformed into the creature he so hates, the bear. He has trouble adjusting when he realizes what has happened, and Tanana appears to tell him that Sitka must have had something really important planned for him, and he must go to where the light touches the mountains to discover what it is. Along his way, Kenai, grumpy and bitter with the turn of events, gets caught in a bear trap (probably one of his own), and encounters a plucky and abandoned cub named Koda. Koda helps Kenai escape, then follows him closely. He reveals that his mom disappeared, and he needs company to make it to the annual bear Salmon Run, where he presumes Kenai is heading as well. Kenai is reluctant, but when Koda says he knows where the light touches the mountains, Kenai has to relent. He's cold and hard toward the talkative and sassy cub at first. Kenai is shocked and frightened to find that Denahi is now hunting the bear he believes killed both his brothers, and comes after Kenai himself. Eventually, as Kenai and Koda escape time after time, Kenai begins to see things through the eyes of a "dumb bear" and gets an entirely new perspective, and slowly begins to warm to Koda. When they get to the Salmon Run, the bears take turns telling the most exciting thing that happened to them over the year. Kenai admits that, as Koda has pretended for so long, Koda is his little brother. When Koda tells his story, however, Kenai realizes with a jolt of horror that the hunter who attacked Koda's mother is actually himself, and Koda doesn't know that she's indeed dead. Kenai confesses, and Koda, crushed, runs away, saying he doesn't have a brother.

Koda reaches the point where the light touches the mountains, just to find an enraged Denahi waiting for him. They fight one last time, but at the last moment, Sitka appears and Kenai is transformed back into a man. He, Denahi and Sitka realize the truth of what has happened, and Koda, having followed Kenai, has a last moment with the spirit of his mother. Kenai understands that he's needed with Koda, so Sitka transforms him back into a bear, but he's welcomed into the tribe as having had his manhood ceremony.

Kenai is voiced by Joaquin Phoenix.

Kenai's major nemesis is himself. At first his problem lies with his hatred of bears, and when he becomes one himself, it puts an interesting spin on his enemy, making himself what he's fighting against. Eventually, he learns to love and forgive, not least of all himself. What do I think?

Kenai is actually kind of a butt for much of this movie, but that's what makes his character arc so interesting. He reminds the viewere of an extremely moody teenager, and even a cranky older brother forced to babysit for the weekend. His change of heart is real and sweet, and his feelings toward Koda by the end seem very genuine. Phoenix provides a rustic, believable performance, and it's quite a nice little interaction. Kenai is one of the most overlooked Disney characters, rather like his film is pretty overlooked. It's a beautiful film, not too heavy on the politically correct, animal rights aspects, more a brotherly love, journey type of epic. The colors are vibrant, the music is appropriately ethnic-sounding, and the characters are memorable. It's a little bit The Lion King, a little bit Pocahontas, a little bit Bambi, but it also has a flair all its own, and it's a bright, touching, fun romp through ancient North America. 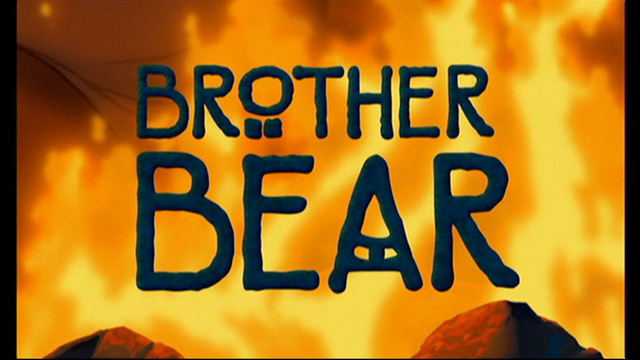 Kenai: You ready?
Denahi: For what?
Kenai: We're going after the bear
. Denahi: I know what you're feeling but... but killing that bear is wrong.
Kenai: Wrong? Our brother is dead and it's because of THAT monster.
Denahi: I don't blame the bear, Kenai.

(about receiving his totem)
Kenai: Yeah, I'll probably get, like, a sabretooth tiger for bravery, or strength, or greatness, you know, something that fits me...
Denahi: How about a mammoth for your fat head? Just make sure you get that basket tied up.
Kenai: Don't worry! No stupid bear's gonna get anywhere near this fish!

(on Denahi's totem and Kenai's totem)
Kenai: I guess the spirits messed up on both of our totems.
Sitka: You know I felt the same way when Tanana gave me mine.
Kenai: Get out of here.
Sitka: No, really. I said, "The eagle of guidance? What does that mean?"... But now that I'm older, I know it's about being a leader... and keeping an eye on you two.
Kenai: ...I just want to get my hand print on that wall.
Sitka: Just be patient Kenai. When you live by your totem... you will.
Kenai: Really?
Sitka: Guarantee it.

(Kenai confesses to Koda that he killed his mother)
Kenai: Koda, there's... something I ought to... you know that story you told me last night?
Koda: Yeah.
Kenai: Well, I have a story to tell you.
Koda: Really? What's it about?
Kenai: Well, it's kind of about a man... and kind of about a bear. But mostly it's about a monster.

Kenai: You want to know what I did this year? I went on the longest, hardest, most exhausting journey I have ever been on, with the biggest pain in the neck I have ever met. But what do you expect from a little brother? (noogies Koda)

Koda: Mom says the spirits make all the magical changes in the world, like how the leaves change color, or how the moon changes shape, or tadpoles change into frogs...
Kenai: Yeah, I get it. You know, for a change, maybe they could just leave things alone.
Koda: What do you mean?
Kenai: My brother's a spirit, and if it wasn't for him I... I wouldn't be here.
Koda: You have a brother up there? What happened to him?
Kenai: He was killed by a bea... by a monster.
Koda: What's your brother's name?
Kenai: Sitka.
Koda: Thanks, Sitka. If it weren't for you, I would have never met Kenai. I always wanted a brother.

Kenai: Keep all that cuddly bear stuff to a minimum, okay, kid?

(Kenai tells Denahi his choice to stay a bear and look after Koda)
Kenai: He needs me.
Denahi: You know, you did look better as a bear...
Kenai: But... Denahi...
Denahi: It's all right, Kenai. No matter what you choose, you'll always be my little brother. (they hug and Kenai transforms back into a bear) Whoa... Did I say little?

Kenai: Enough with the stories. I don't care about the time you and Binky found the world's biggest pine cone ever.
Koda: First of all, his name's Bucky, not Binky. And Second, it wasn't a pine cone, it was a pine nut, and it was huge, even bigger than your fat head.

Kenai (after a caribou stampede): Never try to milk a caribou.

Denahi: Killing that bear won't make you a man.
Kenai: Oh NOW you're trying to be wise?
Denahi: I'm trying to follow my totem. Why can't you do the same?
Kenai: You really think love has anything to do with being a man? A MAN wouldn't just sit here and do nothing.

(Kenai screams when he sees a bunch of bears)
Kenai: AHHHHHHHHHHHHHHHHHHhhhhhhhhhh... huh?
Blonde Bear: Hey, you're stirrin' up the water dude...
Tug: Yeah, try not to scare off the fish there buddy.

Kenai: Koda... your mother's not coming back.

Tanana: Kenai, I have been to the mountain where the lights touch the earth, and the Great Spirits have revealed to me your totem. To become a man, your actions must be guided by one thing: Your totem is... love. Yes, love.
Kenai: The bear of love?
Tanana: A love that connects and unites all living things.
(Kenai looks back to see Denahi laughing silently at him)
Kenai (whispering): Who wants to trade?
Tanana: There is NO trading! (smacks him over the head) Let love guide your actions, and one day, you'll be a man, and will place your mark next to those of our ancestors.

Kenai: Don't DO that!
Koda: Scared you, didn't I?
Kenai: There's scared... and then there's surprised.
Koda: And you were both! Whoa... (he looks away for a second, hinting for Kenai to try. Kenai gives his best effort at roaring) Nice try. Uh, you got a little spit right there...

(about hunters)
Koda: Why do they hate us, Kenai?
Kenai: We're bears.
Koda: So?
Kenai: So... you know how they are! They're... they're killers.
Koda: Wait a minute, who's the killers?
Kenai: Bears.
Koda: What? Which bears? I'm not like that, and you're not like that!
Kenai: Well, obviously not all bears, I mean, you're okay, but most bears... most bears will look for any excuse to attack a human.
Koda: But Kenai, he attacked *us*!

Vote for Kenai as your favorite hero here!

Visit the Links page or head back to the Heroes homepage.