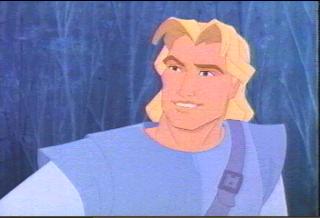 All of my life, I have searched for a land like this one,
A wilder, more challenging country I couldn't design,
Hundreds of dangers await and I don't plan to miss one,
In a land I can claim, a land I can tame,
The greatest adventure is mine...

from "Mine, Mine, Mine"
Menken/Schwartz

John Smith is the hero from Pocahontas (which premiered to network television March 1, 1998 with a preview for the sequel!) (1995).

Captin John Smith arrives in the New World on the Susan Constant, brought along because of his experience with the natives who live there. He's a scout and a hunter, experienced and worldly-wise, and is ready for adventure of any kind. While the greedy and ambitious Governor Ratcliffe plans to dig up mountains of gold and impress the royal English court, John expects to find a new and challenging experience. He finds quite a different one awaits him when he meets the beautiful, elegant Pocahontas. She presents a new face to the savages John came to exterminate, and he's also like nothing she's ever seen, with his blond hair and blue eyes. The two spend time together, getting to know each other, and before long, they find themselves being more and more drawn to each other. John doesn't really understand Pocahontas's system of beliefs until she sings the stirring anthem "Colors of the Wind", explaining that everything has a life and a spirit. John begins to understand, and appreciates Pocahontas's strength and conviction. John meets Grandmother Willow, Pocahontas's ancient mentor, and she approves of his soul as well. Pocahontas explains When Governor Ratcliffe forbids any interaction between the indians and the settlers, John sneaks out, finds Pocahontas and they discuss how to bring peace to their warring people. They embrace and kiss, and Kocoum, Pocahontas's alleged fiancee, and Thomas, a young admirer of Captain Smith catch them in the act. Kocoum attacks the white man, and Thomas shoots in defense. Kocoum falls dead, and Smith orders Thomas to flee. Smith is captured, and Pocahontas's father, Chief Powhatan, sentecnes him to death at dawn. Pocahontas visits his tent that night, sorrowfully saying it would have been better if they had never met. He explains he would rather die tomorrow than live a hundred years without knowing her. In the morning, with Grandmother Willow's urging, Pocahontas rushes to the execution site to find both sides ready to begin war, and places her head over John's. She persuades her father that war is not the answer, and that there is a better path than hatred and anger. He stands down, but Governor Ratcliffe takes aim. John stands in the line of fire, taking a bullet for Powhatan. Bed-ridden from his wound, he must return to England, or die. He asks Pocahontas to come with him, but she realizes she's needed at home. They say a painful goodbye as John sails for Englahd.

John Smith is voiced by the talented Mel Gibson, and in the sequel by his younger brother, Donal Gibson.

John can be seen in Pocahontas, and Pocahontas II: Journey to a New World.

I dedicate this page to Erika, because she has an ENORMOUS crush on this blond-haired, blue-eyed hero (And no, Pocahontas is NOT a bimbo!)... John finds an unexpected soulmate in Pocahontas, one of the "savages" he had been brought to the New World to destroy. She opens his mind to a whole new and refreshing way of thinking, and the two make one of Disney's most romantic couples. Governor John Ratcliffe is a foe to be reckoned with, and in the end, is the reason John and Pocahontas must part. My thoughts...

Okay, this movie gets a lot of flack. Here's the think. It came RIGHT after The Lion King, and this was an unexpected next step for Disney. They didn't expect such a mature romance, or such a bittersweet ending. What they ignore (or didn't see) was the stunning picture that this really is. The music is magnificent, the color scheme and tone are groundbreaking, the acting and animation is superb, and the story is one of Disney's finest. Yes, it's not completely historically accurate, but who ever said it was going to be? Every Disney story is an adaptation (do you really think Disney's Cinderella and Sleeping Beauty are how the stories really went?), and this is no exception. They Romeo-and-Julietized it, and that's fine with me. The ending is still one of the most passionate sequences in film history-- John's sacrifice, saying goodbye, sailing away, Pocahontas running up the cliff while the orchestra accelerates and the swirling wind representing the spirit of Pocahontas's mother blows her heart to him on the ship, it's all very emotional. Excellent film, a work of art. 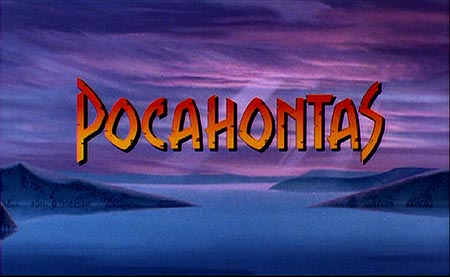 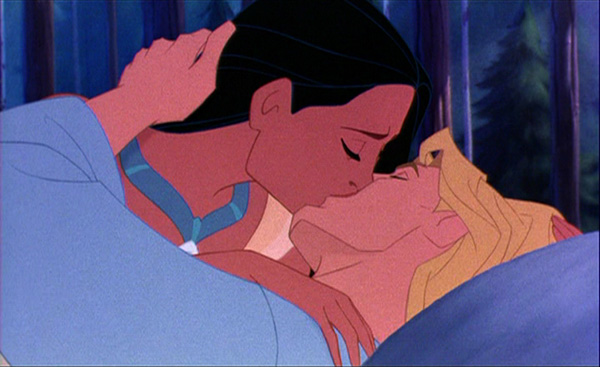 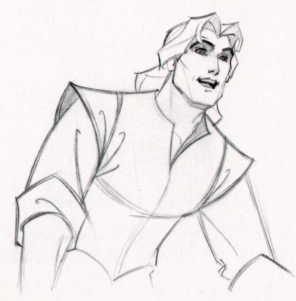 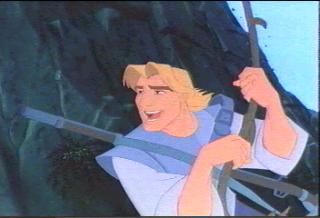 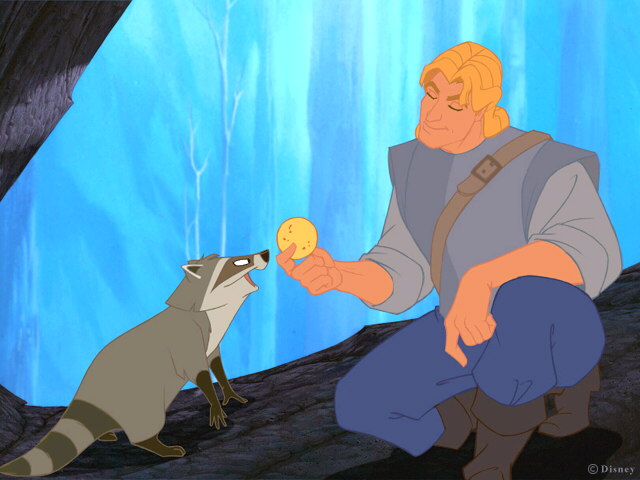 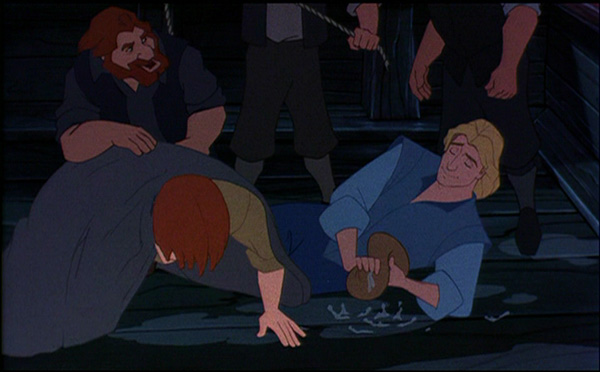 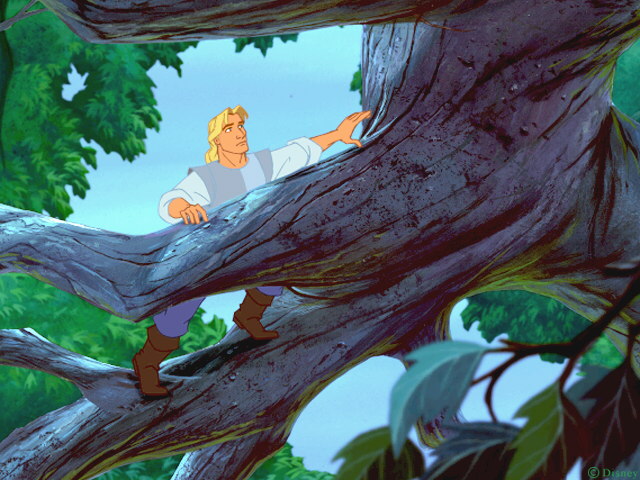 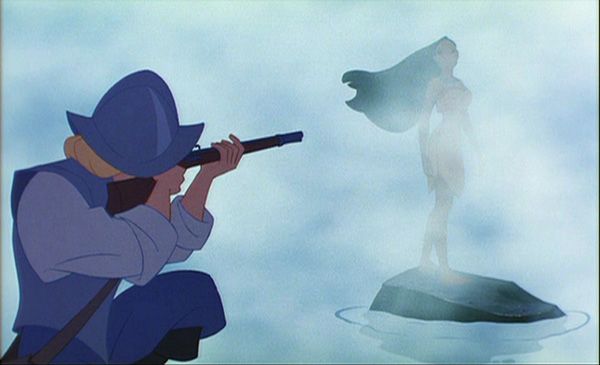 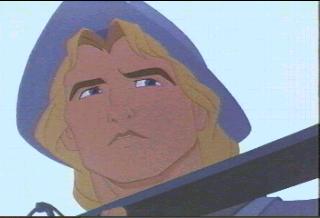 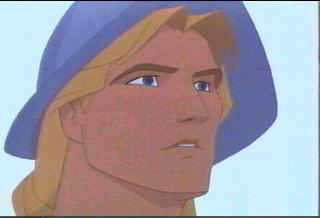 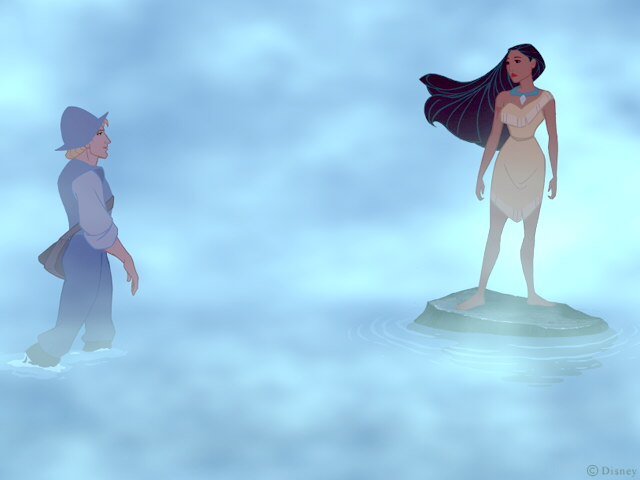 Smith's opinion of the Native American people changes completely when he meets "her." 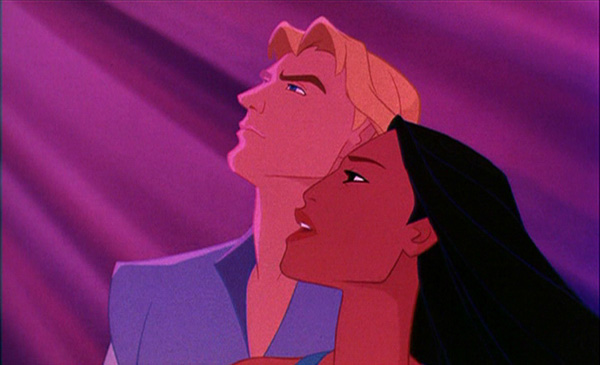 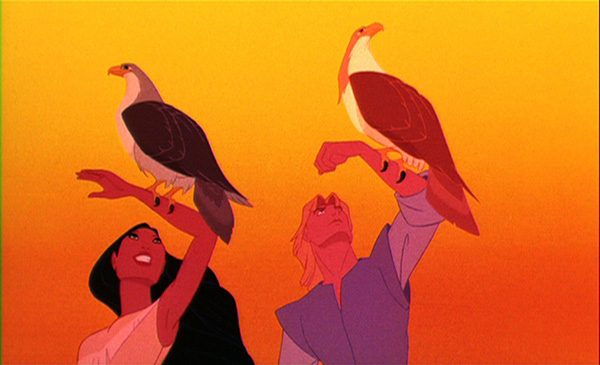 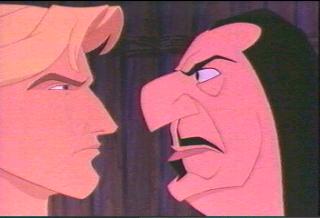 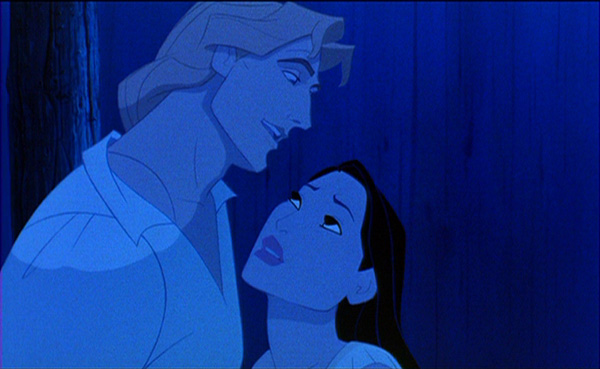 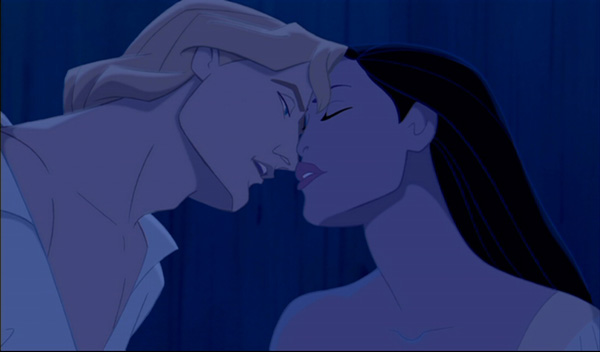 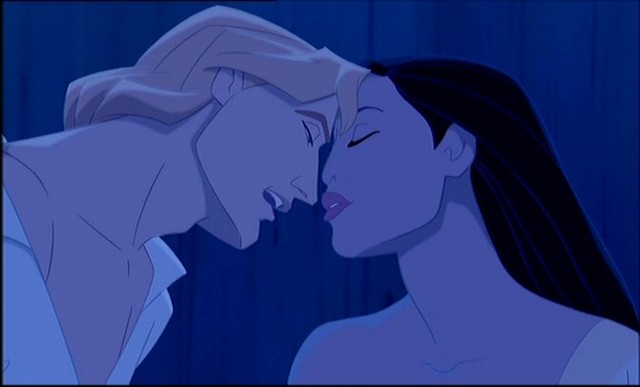 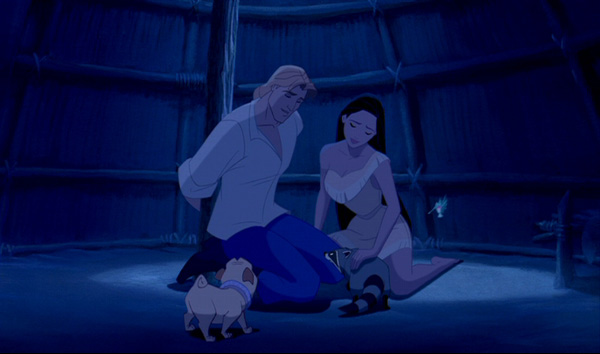 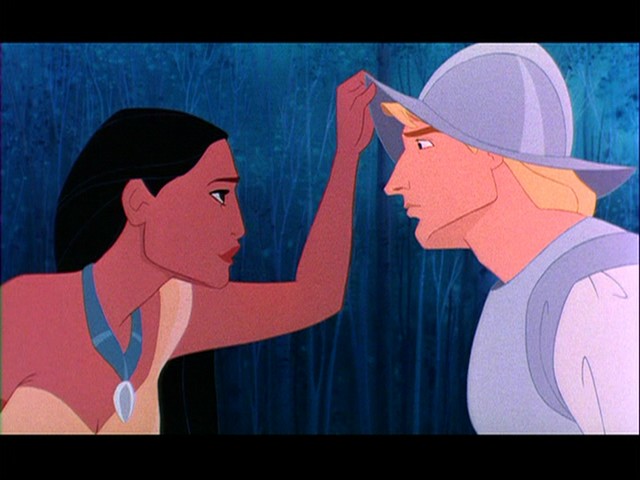 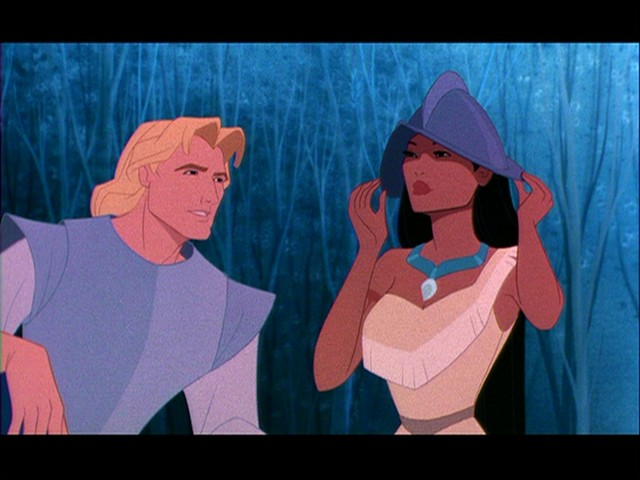 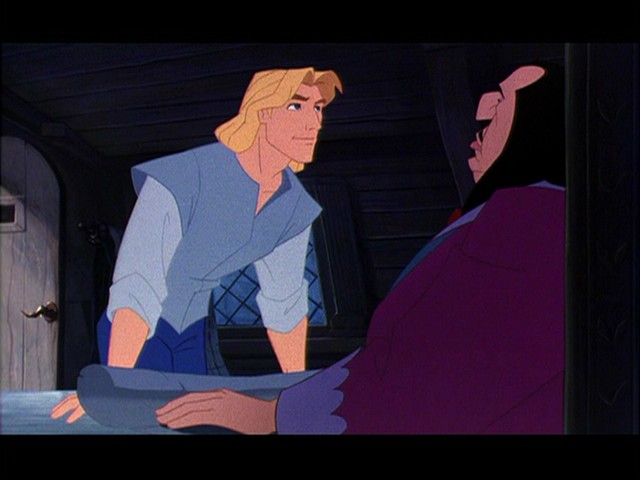 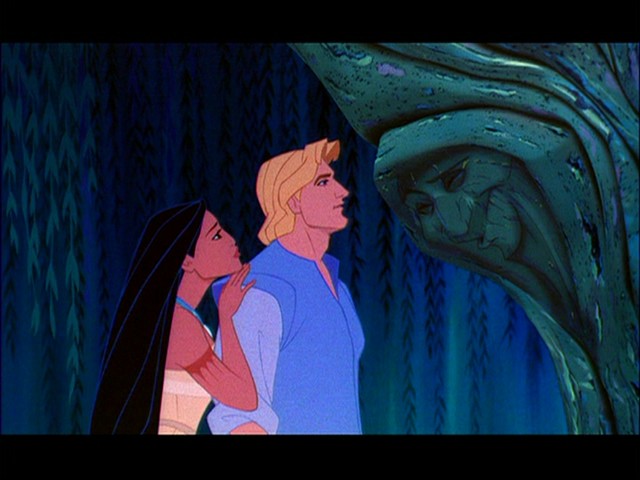 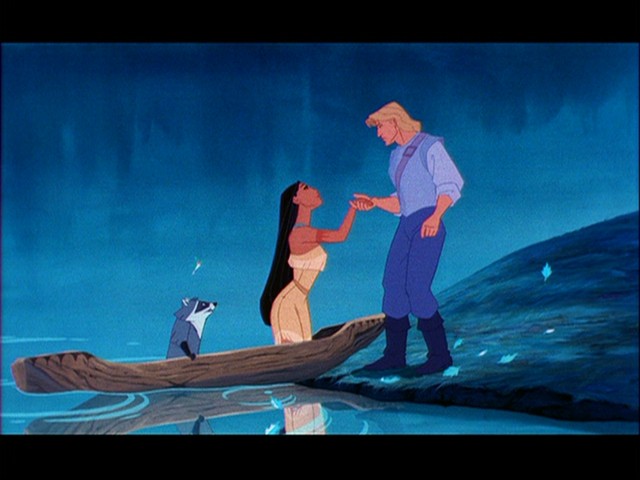 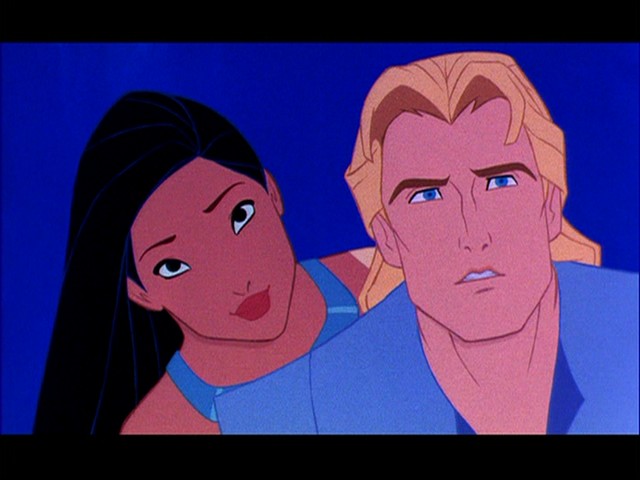 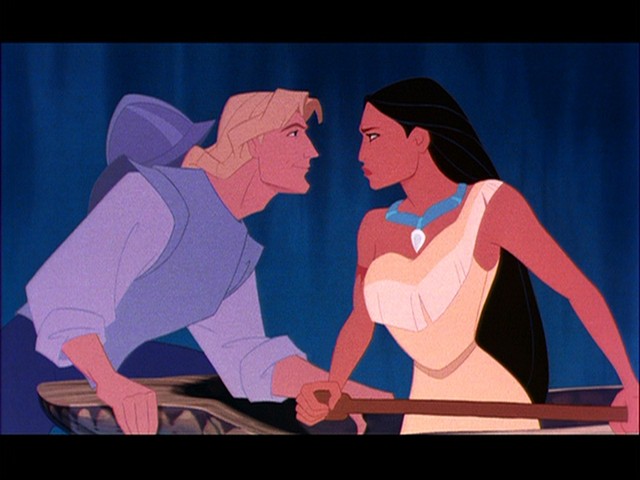 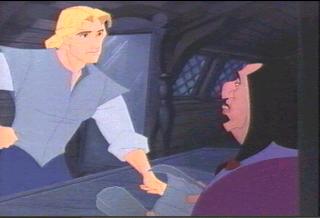 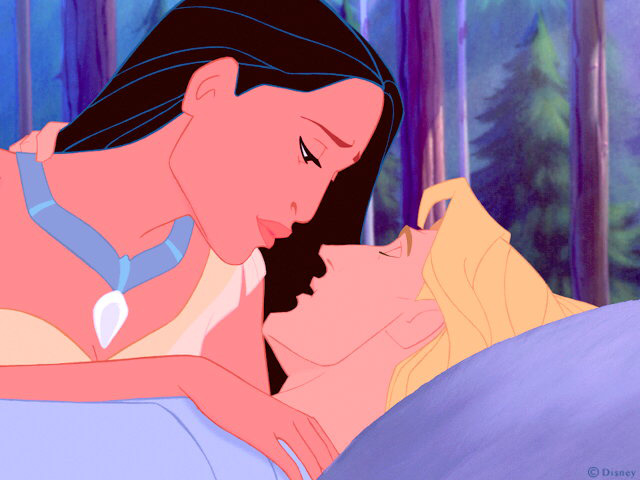 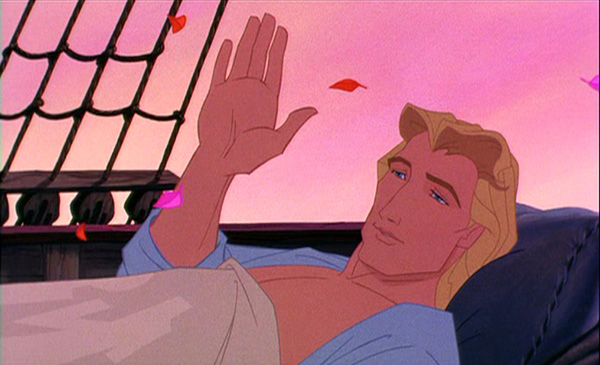 John Smith: I'd rather die tomorrow than live a hundred years without knowing you. John Smith: But I can't leave you.
Pocahontas: You never will. No matter what happens, I'll always be with you. Forever.

John Smith: Is this bottomless pit a friend of yours?

John Smith: Pocahontas, that tree is talking to me.
Pocahontas: Then you should talk back.
Grandmother Willow: Don't be frightened, young man. My bark is worse than my bite.
Pocahontas: Say something.
John Smith: What do you say to a tree?

Pocahontas: I'm so sorry.
John Smith: For what, this? I've gotten out of worse scrapes than this. Can't think of any right now, but...

John Smith: I've seen hundreds of new worlds, Thomas. What could possibly be different about this one?

John Smith: They're not savages! They can help us, they know the land, how to navigate the rivers.. and look! (holds up corn) It's food!

John Smith: Once two sides want to fight, nothing can stop them.

John Smith: Well, it's not like I have much of a home to go back to. I've never really belonged anywhere.

John Smith: Come with me?
Powhatan: You must choose your own path.
Pocahontas: (pause) I'm needed here.

Vote for John Smith as your favorite hero here!