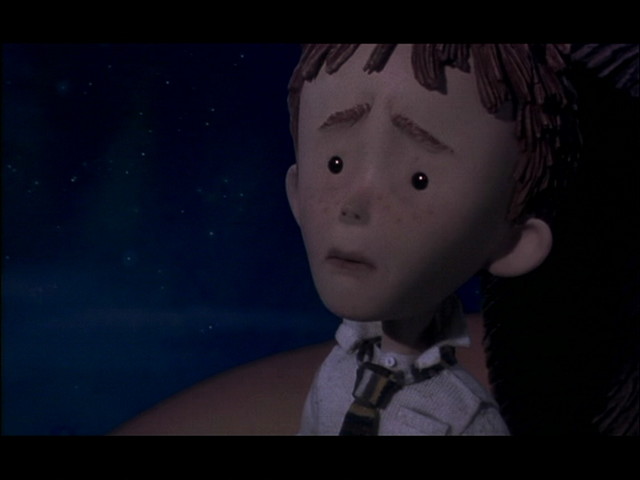 In the film based on the book by Roald Dahl, James Henry Trotter led a good life with his loving parents in England, and they planned on making their home in New York City, but plans change when an angry rhinocerous comes out of the sky and kills both of his parents. James is forced to live with his awful and aptly-named aunts, Aunt Sponge, and Aunt Spiker, who give him endless chores every day and treat him like a bug under their foot, poised to be crushed. When James meets a mysterious old man who gives him a bag of glowing green crocodile tongues, and when he drops them, James isn't sure what to expect. A peach appears on the old dead tree in the front yard by morning, and it soon begins to grow to astronomical proportions. Sponge and Spiker plan to use it to its fullest by charging admission for locals to see it, but James, while cleaning up the garbage from the crowds, can't resist the temptation of the juicy peach and has a bite of it. An opening appears and James climbs inside, and finds that the peach has grown because of a stray crocodile tongue. James meets a gang of oversized bugs living inside the peach, and they go on a journey across the ocean to New York City, facing mechanical sharks, undersea pirates, a severe change of course, and, once they arrive in America, a nasty pair of aunts. After defeating Sponge and Spiker once and for all, James finds true friendship in his bug friends, and makes a wonderful home in the pit of the peach in Central Park.

James is played (and voiced) by Paul Terry.

James encounters many villains on his journey, including a giant robotic shark, his horrible aunts, Sponge and Spiker, and the terrifying rhino that killed his parents. What about James?

This is an excellent film, the attention to detail and character are quite noteworthy. James painting the front yard fence with a white-out brush, and using his toy box as a wheelbarrow to do his chores are examples of the pure genius that runs throughout this film. It takes a little getting used to, when James changes from live-action to stop-motion, but the character development of James and his bug friends is really quite remarkable, and Sponge and Spiker are perfectly revolting villains. This is a great, underappreciated gem, and has great tunes by Randy Newman. 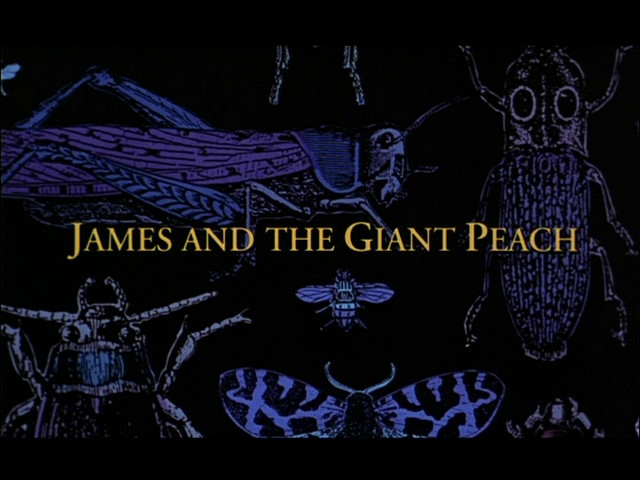 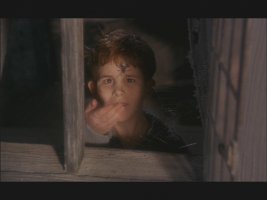 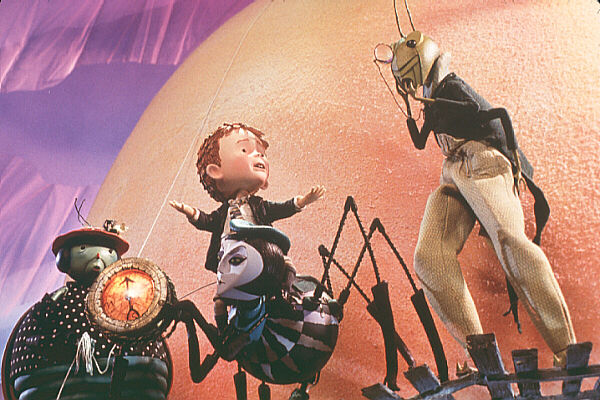 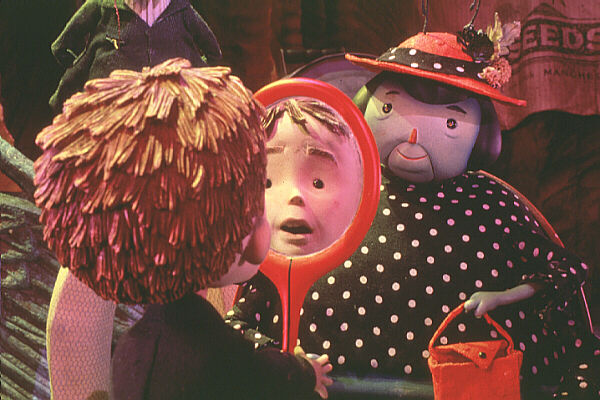 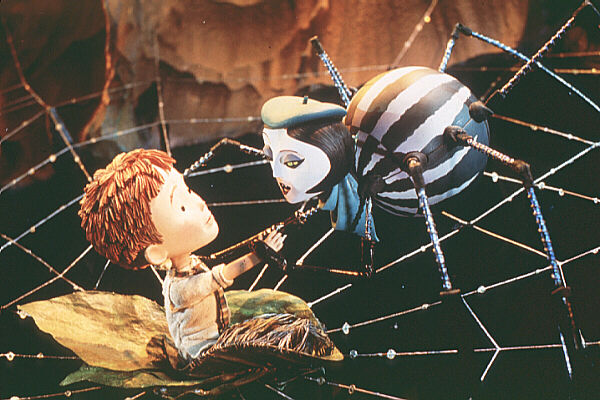 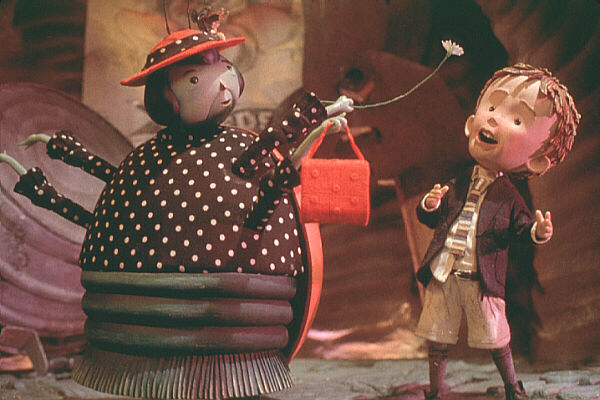 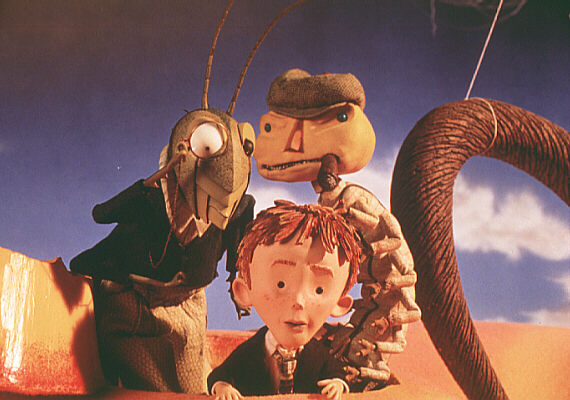 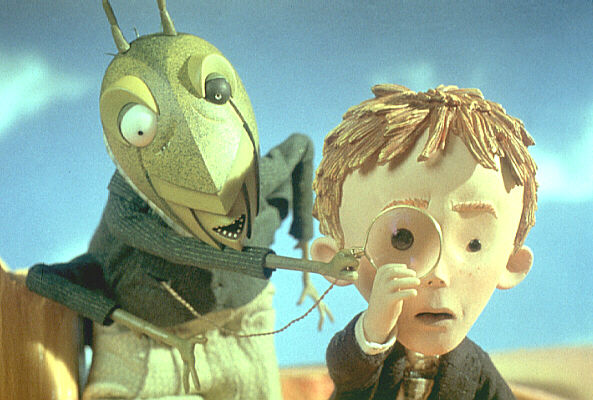 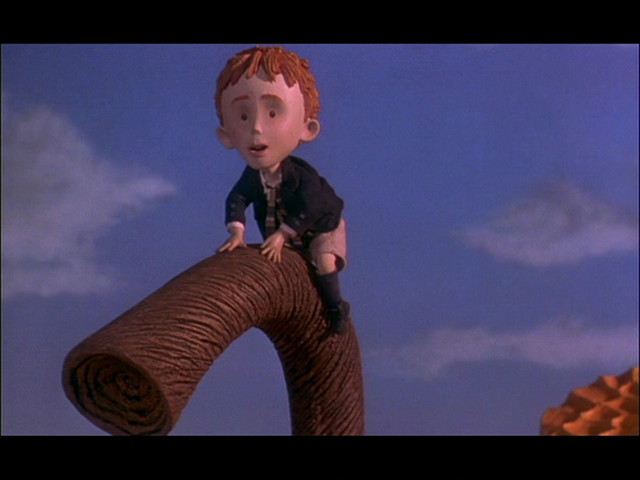 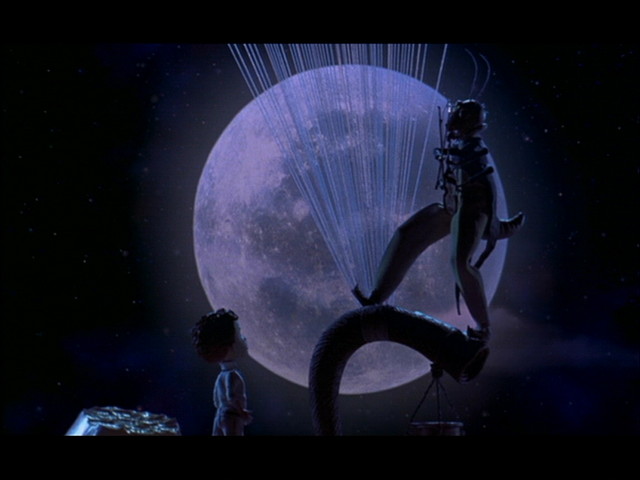 James: Excuse me, sir, can you tell me where the Empire State Building is?
Hard Hat Man: You're on top of it, kid.

James: I can't remember what fun is for.

(Spiker and Sponge are outside the peach, looking for James)
Aunt Spiker: Where are you? You little worm!
Earthworm: AAAHHHHHH!
James: Not you, ME!

James: Whenever I had a problem, my parents told me to look at it another way.
Earthworm: How? First, I was bird bait, and then I was shark bait.
James: That's true, but you could say that you gave us wings to fly, and that you defeated a giant shark single-handedly.
Earthworm: No-handedly!
James: You're a hero.
Earthworm: I am. I'm Wonderworm!
James: You are!

Aunt Sponge: We sent you out here to kill a spider!
Aunt Spiker: Not to laze about.
James: I wasn't lazing about, I tripped.
Aunt Sponge: How dare you disagree with us!

James: What are they?
Old Man: Crocodile tongues.
James: Tongues? Old Man: Long, slimy crocodile tongues boiled in the skull of a dead witch for 40 days and 40 nights. And, the gizard of a pig, the fingers of a young monkey, the beak of a parrot and three spoonfuls of sugar, and then, let the moon do the rest.

(everyone is discussing how to get the peach to New York)
James: We could... No, it's stupid.
Grasshopper: Compared to what?
James: Well, I suppose we could fly out.
Centipede: He's right. It's stupid.

James: You're not even a real rhino! You're just a lot of smoke and noise! I'm not afraid of you!

Vote for James as your favorite hero here!