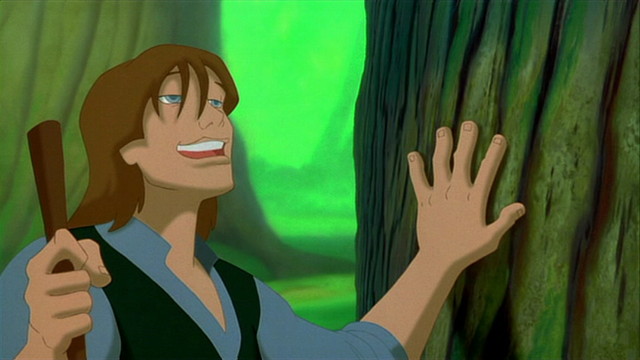 This is where
Like every tree stands on its own
Reaching for the sky, I stand alone
I share my world with no one else
All by myself, I stand alone

Garrett is the hero from The Quest for Camelot (1998).

Garrett worked in King Arthur's stable when he was young, learning fighting skills from the knights and dreaming of becoming one himself. But when an accident involving a hay fire blinded him, he became solitary, jaded, and painfully independent. He keeps to the Forbidden Forest with Ayden, his falcon. His blindness was an obstacle, naturally, but he learned to use his instincts and fight what he couldn't see, rather than fear it, using Ayden as his eyes. The forest became part of him, and he part of it. When Kayley interrupts his solitary existence, she completely throws him for a loop. When he can't shake her, he agrees to help her, even if it means going back to Camelot, the place he hoped he would never return to, with all its painful memories. He has to learn to trust and rely on others, something he had conditioned himself against since his embittering experience in Camelot. When he begins to fall for the idealistic and feisty Kayley, it complicates things as he's sure his blindness will be an obstacle to their relationship. He and Kayley return to Camelot and help return Excalibur to Arthur and defeat the villainous and avaricious Ruber. On their wedding day, King Arthur knights them both Knights of the Round Table.

Garrett is voiced by Cary Elwes, with Bryan White as his singing voice.

Then I indicate which films/TV series they are featured in.

Garrett meets his match in the tomboyish Kayley, and through her he learns to trust people again, and falls for her in the process. Ruber was one of Arthur's knights, but blinded by his own greed, he kidnapped Kayley's mother, a friend of King Arthur, to try to get into Camelot, steal Excalibur and take over the kingdom. And what do I have to say?

Okay, so... This film gets a lot of flak, and I have to say it actually deserves some of it. It's by no means the best animated film ever, not even close, but it does have some redeeming qualities. Some of the character design is a little jarring, and the songs seem like a strange blend of Celtic, country, medieval and generic movie score, but there are some enduring tunes (particularly the oft-recorded Prayer, as heard by Celine Dion, Andrea Bocelli, John Groban and Charlotte Church, as well as yours truly, on occasion...). It's sort of a mish-mash of the good and bad, some charming themes about family and following inspiration and dreams, and love being blind, but with some choppy animation and a sort of jilted plotline. It has its funny moments (provided more than once by the comic relief two-headed dragon, Cornwall and Devon), and it definitely is worth seeing if only to have an educated opinion, but nothing groundbreaking. Just a colorful ride through Camelot. 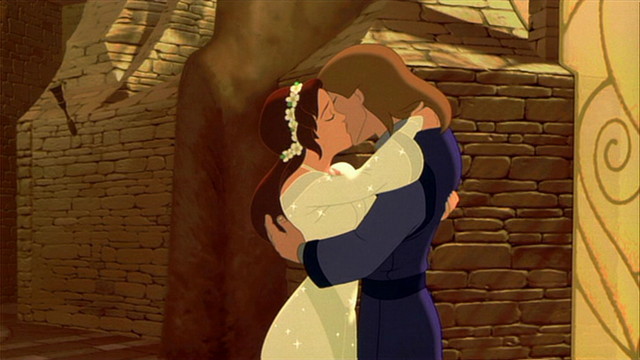 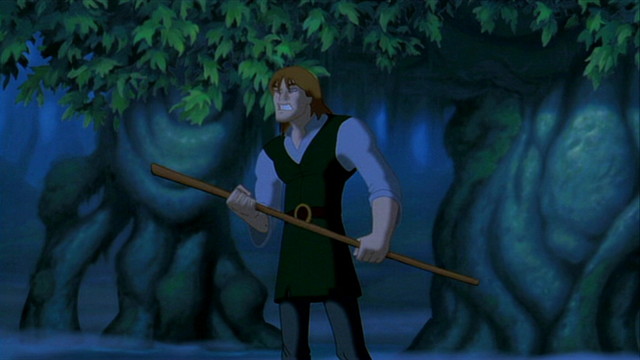 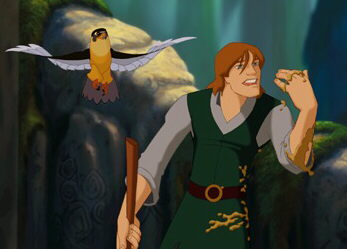 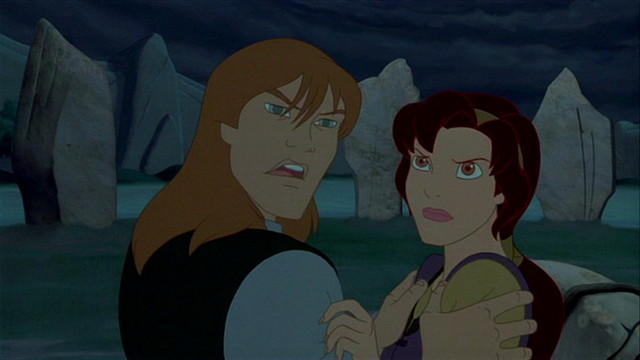 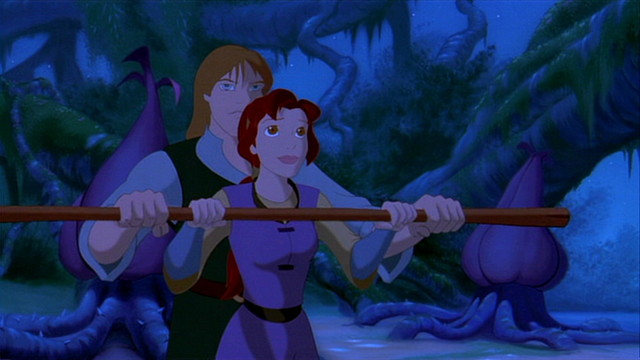 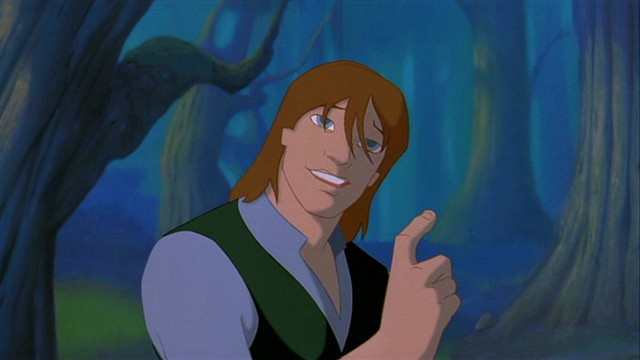 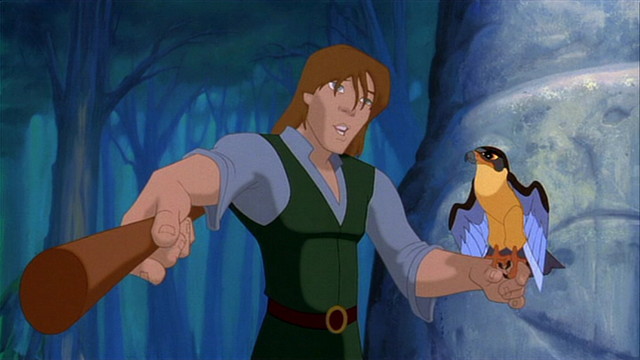 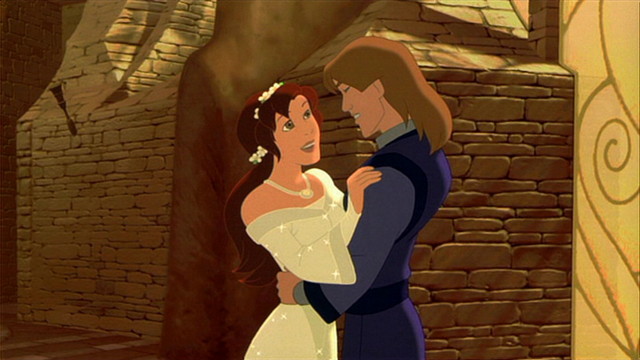 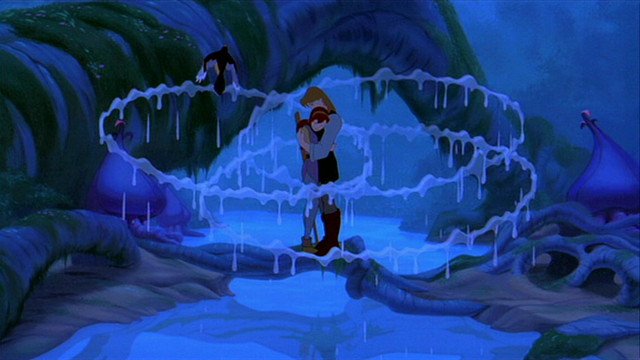 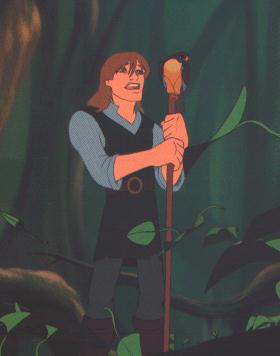 Garrett: Me and Ayden, we work alone!

Garrett: Excaliber belongs only in the hands of King Arthur.

Garrett: A knight's strength comes from his courage.

Garrett: Kayley: Oh, oh I didn't realize you were...
Garrett: What? Tall? Rugged? Handsome?
Kayley: Blind.
Garrett: You know I always forget that one.

Kayley: Are you sure this is dragon country? I mean, shouldn't there be a sign or something? It could say, 'Welcome to Dragon Country.'... You don't think we'll see any... do you?... Is a group of dragons a pack or a flock? Is it a gaggle or a herd? Is it a pride?
Garrett: Quiet...
Kayley: Do you hear something?
Garrett: No, I just want you to be quiet for a while.

Garrett: You don't understand. In Camelot, she'd only see me through their eyes. Not a knight. Not a man. Not anything.

Vote for Garrett as your favorite hero here!

Check out the links page for a few Garrett-based resources I've found, or head back to the Heroes homepage.