Phillip J. Fry was a lowly pizza delivery boy, sent on a bogus delivery on December 31, 1999. As the clock struck, ringing in the year 2000, Fry fell backwards into a cryogenically freezing chamber, which was set to 1000 years. Fry woke up on the 1st of January, 3000, to find a completely new world. He made friends with Leela, Bender, Dr. Zoidberg, Amy, Dr. Hubert Farnsworth, and Hermes, and joined their team at Planet Express, once again working as a delivery boy (seems his fate, huh?). Fry's sort of the everyman, sometimes playing the dumb, human, male perspective, for the sake of the plot or a joke, but everyone can relate to him. He's sort of an idiot, but he's endearing and has some positive qualities, and, besides, he's pretty funny.

Fry is voiced by Billy West, an actor well-acquainted to doing animation voice-work.

Although it rarely amounts to anything, rumors abound and hints tease that Fry and Leela have some romantic feelings for each other, regardless of their constant razzing of each other. Fry also had a girlfriend named Michelle in the 20th Century. Fry encounters many threats during his adventures in the year 3000. 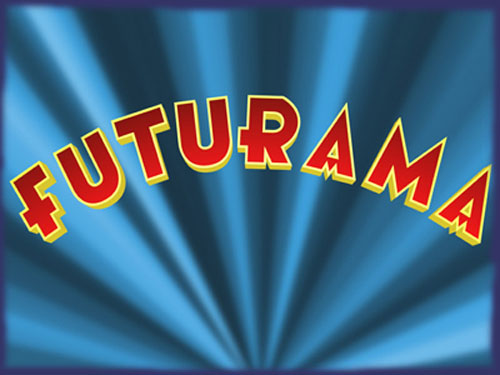 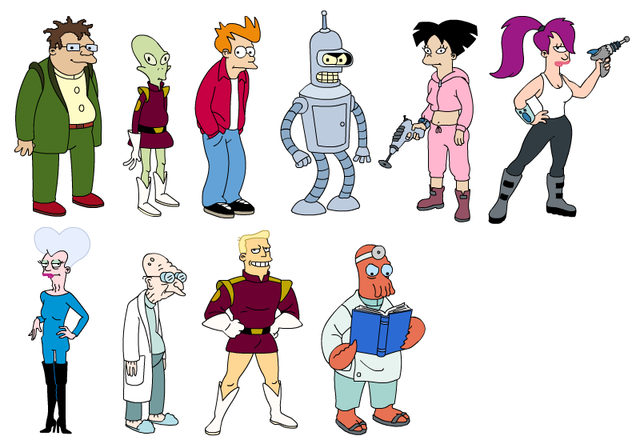 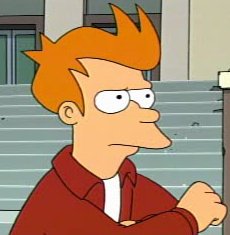 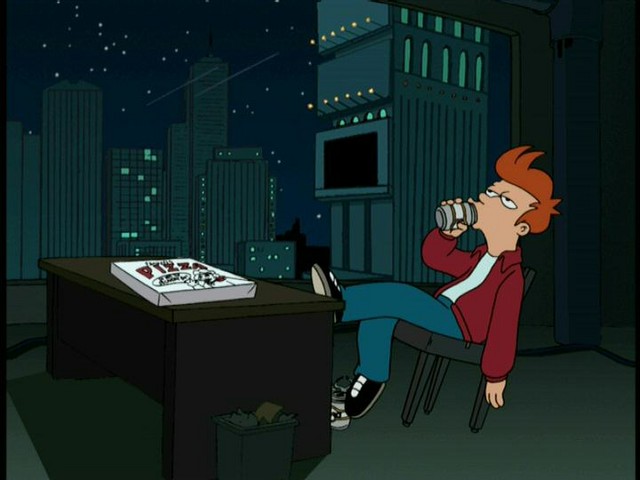 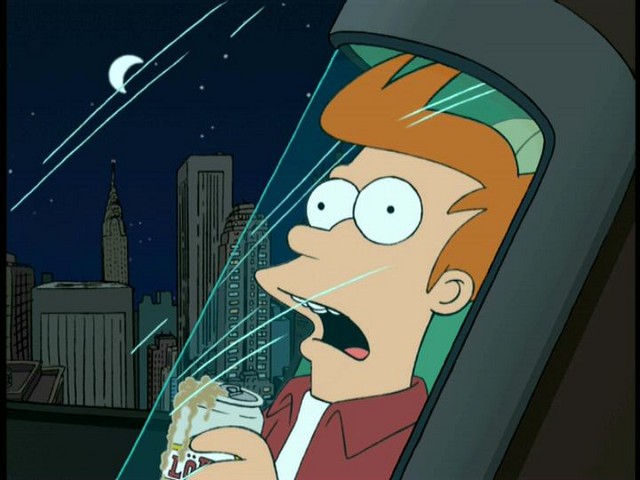 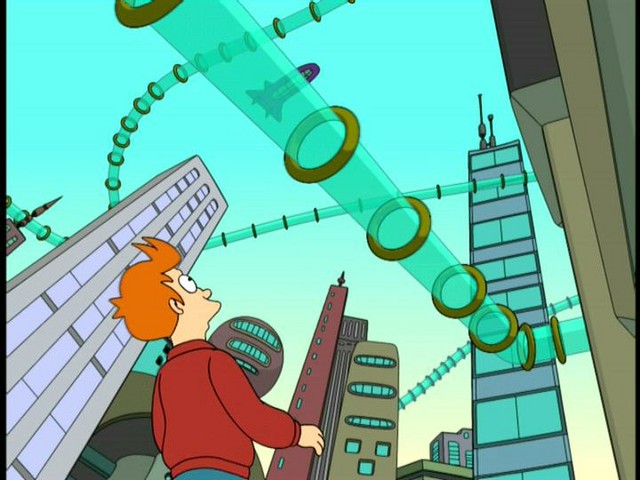 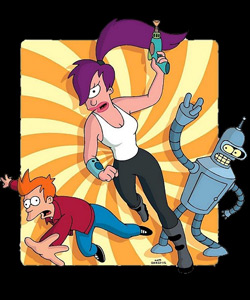 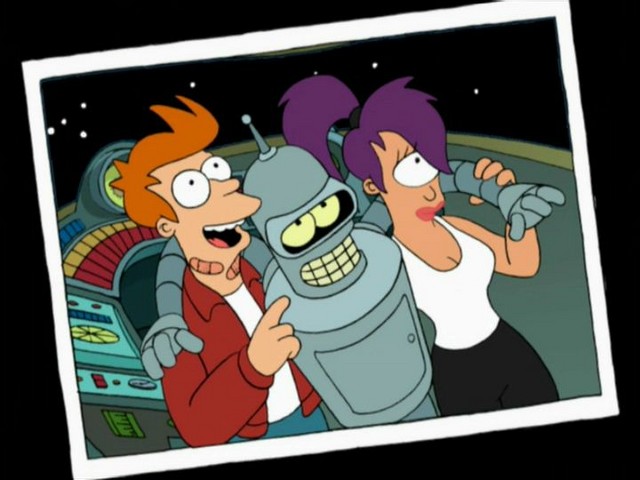 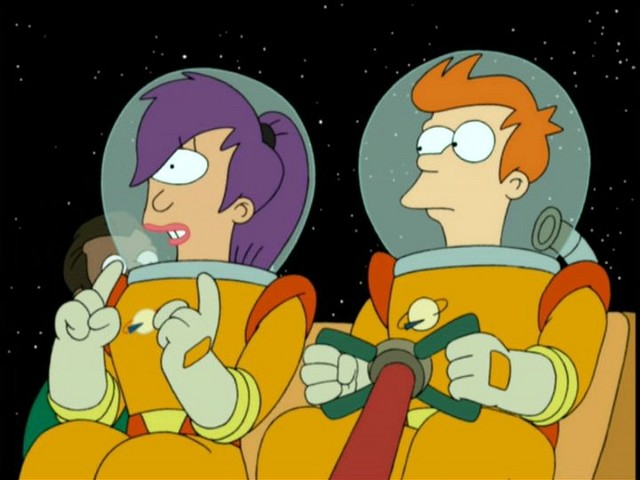 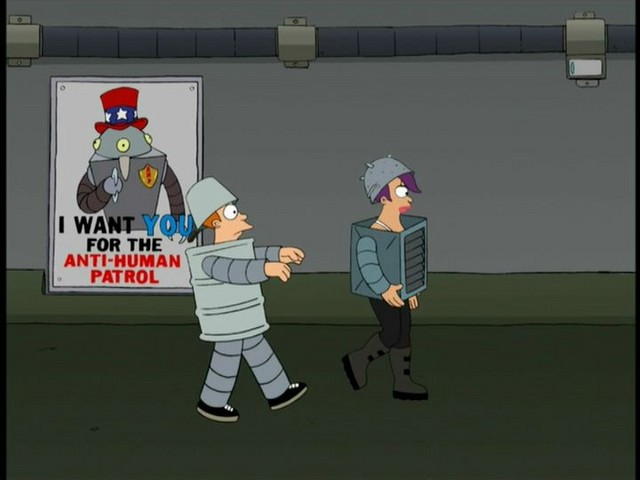 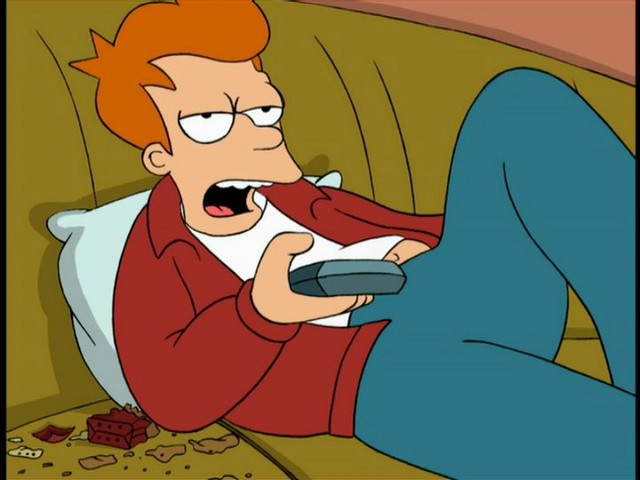 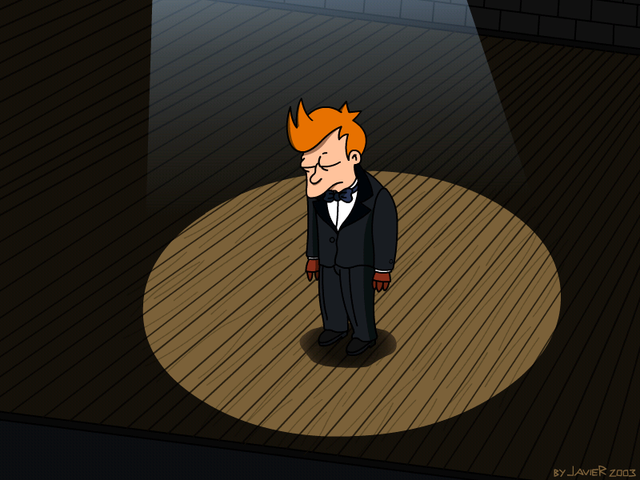 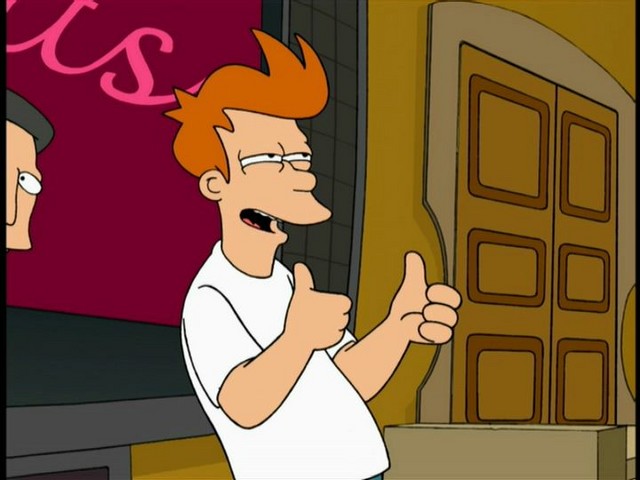 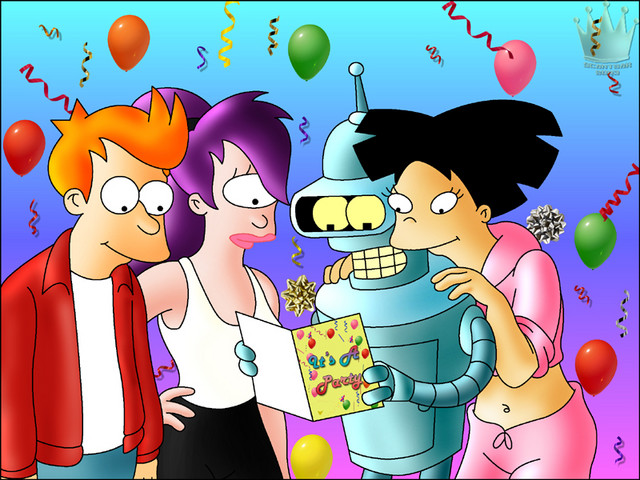 (First lines of the series)
Fry: (offscreen) Space. It seems to go on and on forever. But then you get to the end and a gorilla starts throwing barrels at you.

Fry: That's the saltiest thing I ever tasted, and I once ate a big heaping bowl of salt.

Dr. Zoidberg: Now open your mouth and lets have a look at that brain. (Fry opens his mouth) No, no, not that mouth.
Fry: I only have one.
Dr. Zoidberg: Really?
Fry: Uh... is there a human doctor around?
Dr. Zoidberg: Young lady, I am an expert on humans. Now pick a mouth, open it and say "brglgrglgrrr"!
Fry: Uh... brglgrglgrglgrrr!
Dr. Zoidberg: What? My mother was a saint! Get out!

Fry: No, Professor, don't give up. There were plenty of times in my century when I was going to give up, but I never did, never. Hey, are you even listening to me? Oh, I give up.

Fry: Hey, you have no right to criticize the 20th century. We gave the world the light bulb, the steam boat and the cotton gin.
Leela: Those things are all from the 19th century.
Fry: Yeah, well, they probably just copied us.

Fry: Can I do the countdown?
Leela: Huh? Oh, sure. Knock yourself out.
Fry: Ten. (ship takes off) Nine. (ship reaches the moon)
Leela: Okay, we're here.
Fry: (quietly) Eightsevensixfivefourthreetwooneblastoff.

(Discussion of the mysterious Slurm Cola)
Leela: This all must have something to do with the secret ingredient.
Fry: My God, what if the secret ingredient is people?
Leela: No, there's already a soda like that - Soylent Cola.
Fry: Oh. How is it?
Leela: It varies from person to person.

Leela: I've never seem anyone so addicted to Slurm.
Fry: This is nothing. In high school, I used to drink a hundred cans of Cola a week, right up to my third heart attack.

Fry: If you care about Nibbler, stop caring about him.
Leela: I can't. I love every living creature.
Fry: Even me?
Leela: As a friend.
Fry: Damn.

Fry: Every Christmas my Mom would get a fresh goose, for gooseburgers, and my Dad would whip up his special eggnog out of bourbon and ice cubes.

Fry: This snow is beautiful. I'm glad global warming never happened.
Leela: Actually, it did. But thank God nuclear winter canceled it out.

Fry: I feel like a rat. Here I am whining like a pig while all along Leela is as lonely as a frog.

Fry: I'm not a one-woman man.
Leela: I'm sure you'll be back to zero soon enough.

Fry: I have an idea.
Leela: I have a better one.

Leela: Uh guys, I don't know how to tell you this. So I'll just let Fry blurt it out thoughtlessly.
Fry: We don't work for you anymore!

Fry: Ooh. "Big Pink." It's the only gum with the breath-freshening power of ham.
Bender: And it pinkens your teeth as you chew.

Soldier: This is the worst part. The calm before the battle.
Fry: And then the battle is not so bad?
Soldier: Oh, right. I forgot about the battle.

Dr. Zoidberg: I want the tactile pleasure in cutting him here... (points his claw at Fry's neck) ...in the gonads.
Fry: (to crowd) Shhhhhh. Nobody correct him!

Fry: Man, I thought Ultimate Robot Fighting was real, like pro wrestling, but it turns out it's fixed, like boxing.

(Fry and Leela meet)
Fry: Can I ask you a quesion?
Leela: As long as it's not about my eye.
Fry: Uhh...
Leela: Is it about my eye?
Fry: Sort of.
Leela: (sighs) Just ask the question.
Fry: What's with the eye?
Leela: I'm an alien.
Fry: (excited) Cool, an alien. Has your race taken over the Earth?

Leela: Didn't you have ads in the 21st century?
Fry: Well sure, but not in our dreams. Only on TV and radio, and in magazines, and movies, and at ball games... and on buses and milk cartons and t-shirts, and bananas and written on the sky. But not in dreams, no siree.

(Fry eats a bad egg sandwich)
Fry: It's like there's a party in my mouth and everyone's throwing up.

(Fry threatens the parasites in his colon)
Fry: I hope Satan has a nice colon, 'cause that's where you're gonna be living.

Fry: This was our storage closet. My Dad spent years turning it into a bomb shelter.
Leela: (sadly) And yet you guys never had a single nuclear war.
Bender: (sadly) What a waste.

Fry: That clover helped my rat-faced brother steal my dream of going into space. Now I'll never get there.
Leela: You went there this morning for doughnuts.

Leela: They buried your brother in the World Heroes Section? Impressive.
Fry: (jealous) I should be the one in that grave.

(Fry and Michelle have traveled to a post-apocalyptic year 4000)
Fry: Michelle, I don't regret this, but I both rue and lament this.

Fry: What's deathrolling?
Kid tribe member: It's like skateboarding, but half the time someone dies.
Fry: Oh. So it's a little safer than skateboarding.

(Smart Fry visits Leela's apartment)
Fry: Apartment 1-I. The old me would make fun of that.

(Fry attacks his own brain to get rid of parasites)
Parasite: No creature would voluntarily make an idiot of itself.
Fry: Obviously, you've never been in love.

Fry: Well, I've killed my grandfather.
Professor Hubert Farnsworth: Whaaaaaaaa?
Leela: Wait, if you killed your grandfather, why do you still exist?
Fry: I don't know. Maybe God loves me.

Fry: So you're saying these aren't the decaying ruins of New York in the year 4000?
Professor Hubert Farnsworth: You wish. You're in Los Angeles.
Fry: But there was this gang of ten-year-olds with guns.
Leela: Exactly. You're in L.A.
Fry: But everyone is driving around in cars shooting at each other.
Bender: That's L.A. for you.
Fry: But the air is green and there's no sign of civilization whatsoever.
Bender: He just won't stop with the social commentary.
Fry: And the people are all phonies. No one reads. Everything has cilantro on it...

Fry: Dear Horse God, I know I don't usually pray to you. Sometimes I doubt you even exist, but if you're willing to grant me luck... please... stamp your hoof for once.

(Fry befriends a stray dog)
Fry: I like you, Seymour. You're not constantly judging me... (bitter) ...like all the other dogs. (panicked) Are you? (relaxed) Nah.

Vote for Fry as your favorite hero here!