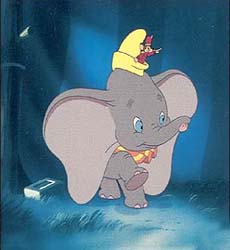 Dumbo is the silent and underdog hero of the film of the same name (1941).

Dumbo is a small, innocent elephant calf, born to his mother, Mrs. Jumbo (by way of the stork, naturally), on the elephant car of a travelling circus train. Mrs. Jumbo is thrilled at her new arrival, and at first names him Jumbo, Jr. He is instantly the apple of his mother's eye, and all of the other elephants take to him immediately as well. When one of the others tickles under the baby's chin, he sneezes, revealing for the first time his extremely large and floppy ears. The other elephants deride and ridicule the infant, calling the mute elephant Dumbo, much to Jumbo's dismay, and she dismisses them instantly from her company. Jumbo and Dumbo develop the instant bond that can only exist between mother and child, and Dumbo becomes part of the circus, helping out with raising the tents at their next location. When the local kids bully and tease Dumbo because of his ears, Jumbo goes on a rampage to defend her son from the abuse, and she is chained in solitude in a barred circus car with a plaque reading "Mad Elephant." Dumbo, now feeling completely alone, and shunned by the gossiping elephants, now not only because of his appearance, but also because of his association with a mad elephant. Timothy J. Mouse, a circus rodent, taking pity on the poor little guy, gets the idea to use Dumbo's differences, rather than have him ridiculed for them, and subconsiously convinces the ringmaster to have Dumbo star as the pinnacle of a towering stack of elephants. When Dumbo's ears hinder his participation in the act, and further causes the act to be disrupting, and the destruction of the entire circus tent, he is reduced to acting as part of the clown act, jumping into a bucket of whipped cream from a tall tower. The act is a success, but the clowns get carried away and request that the tower be raised, regardless of Dumbo's feelings. The vindictive pachyderms, wounded and bruised from their failed act, and ashamed of Dumbo's demotion to a clown, denounce his status as an elephant. Heartbroken and dejected, Dumbo is miserable. Timothy takes pity on the depressed Dumbo, and arranges a meeting with him and Jumbo (the resulting reunion is one of the most heart-breaking moments in all of movie history, Disney or otherwise, in which Jumbo extends her trunk out the bars of her prison and rocks Dumbo as he weeps into her trunk). After Timothy and Dumbo have a foray into the psychadelic world of Pink Elephants on Parade, inadvertently drowning their sorrows in a spiked bathtub, Dumbo wakes up in a high bough of a nearby tree. A group of crows good-naturedly harass Dumbo and Timothy, but Timothy realizes that Dumbo must have flown up into the tree. He and the crows convince Dumbo to try to fly again, using one of their tail feathers as a "Magic Feather", which will help him to fly. Dumbo is hesitant, but he tries, and sure enough, his ears are perfect wings. The next time Dumbo is ready to take his plunge into the clowns' bucket, Timothy sits in his hat, and the feather is clutched in his coiled trunk. As Dumbo jumps, his grip slips and the feather flies hopelessly out of reach. Completely psyched out, Timothy tries to reason with Dumbo that the Magic Feather was a ruse, and the ability to fly was all part of who he was, and had nothing to do with the feather. Dumbo panics, but at the last second, spreads his ears and sails back into the air, skimming the heads of the amazed crowd, and stunning the clowns into silence. Dumbo is hailed as a star, and his mother is released from her prison. They are reunited, and Timothy, now Dumbo's well-to-do manager, leads the once-downtrodden outcast into fame and fortune, helping with war efforts and entertaining crowds for years to come.

Dumbo is one of the few animated films to feature a silent character as its star and title character. Amazingly, even without voice talent, Dumbo is one of the most sympathetic and endearing heroes in the Disney pantheon, a true example of good animation.

Dumbo is the star of the film of the same name, as well as the upcoming Dumbo II (not to mention the 1985 Disney Channel series, Dumbo's Circus, where he's voiced by Katie Leigh).

Dumbo, young as he is, doesn't have a romantic relationship, but rather the love story in this film is one between mother and son. If you can watch the "Baby Mine" segment without tearing up, you need to have your heart examined. Dumbo's major obstacle to overcome is his own feelings of low self-worth, and the problems he has with his identity, but these issues are further aggravated when he is teased by circus visitors, and the circus pachyderms shuns him, saying "he is no longer an elephant." While he doesn't face an evil sorcerer or a vindictive usurper of the throne, Dumbo's nemeses are just as threatening, if not more so, internal as they are. How do I feel about Dumbo?

This shortest feature in the line-up of Disney's animated films is an absolute classic. One of those half dozen that I grew up watching religiously on an ancient video tape, this movie is timeless, as touching and entertaining now as the year it was released. Like I said, it contains one of the most moving sequences ever committed to film, animated or otherwise, and has some really excellent animation and characters, with fun and memorable music. It's short, but it has a definite point, and gets it across effectively. It's a true underdog story, and we really root for Dumbo in his troubles. The true art of animation, getting an emotion across through a series of drawings, is used effectively here, as Dumbo doesn't speak at all. As an interesting bit of trivia, this film was short and production was streamlined in part because, during the war, Walt Disney was unable to go to the expense of production he had in previous films, or films to come later. It did fairly well upon its release, as the public, weighted down by the anxiety of the war, appreciated stories about underdogs defeating opposition, and often unbeatable odds. The plot of this movie is deceptively simple, often poignant and moving, and always entertaining.

Pictures of the Amazing Flying Elephant and his friends 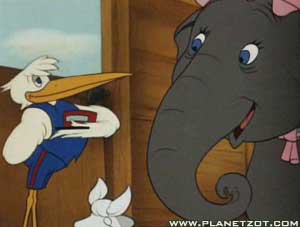 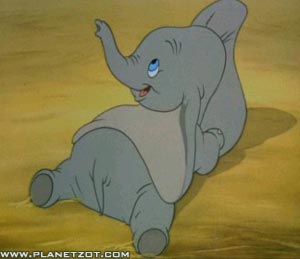 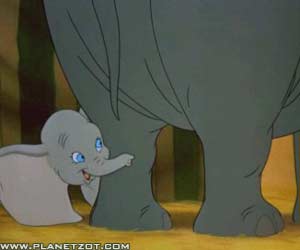 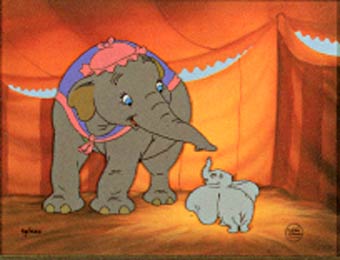 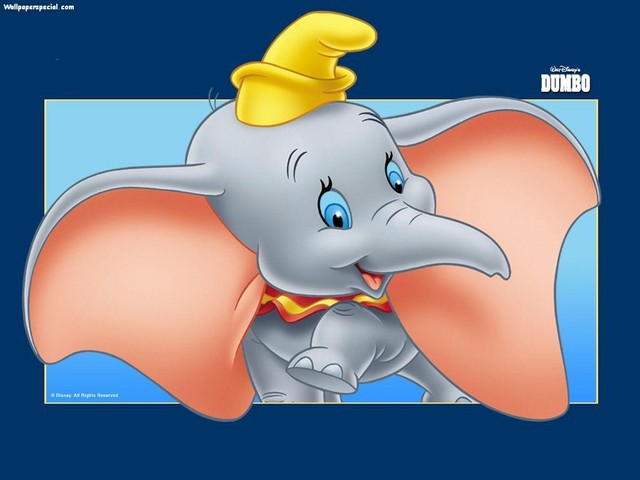 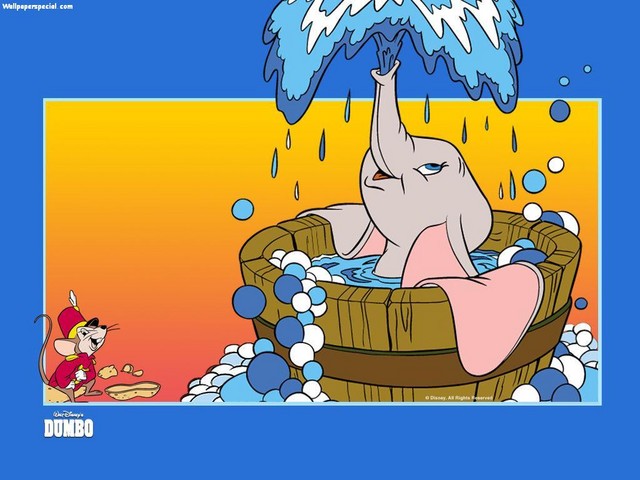 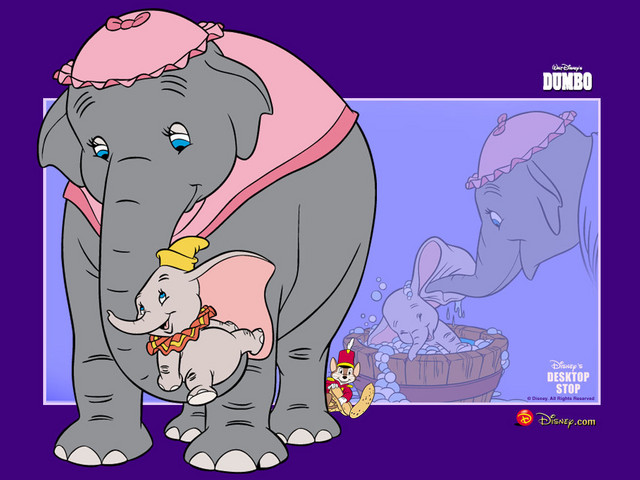 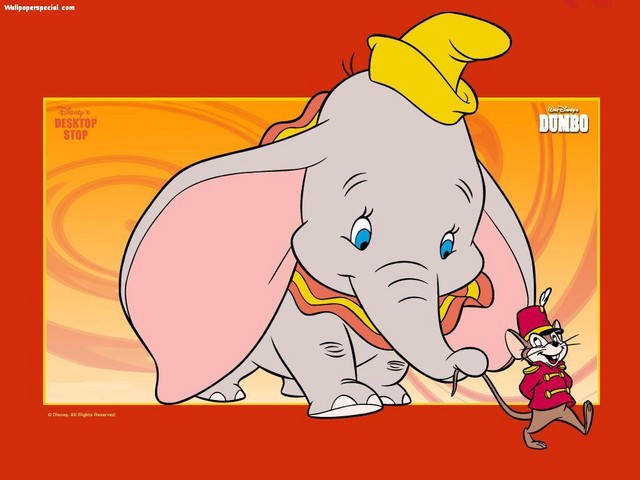 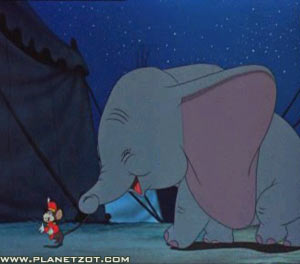 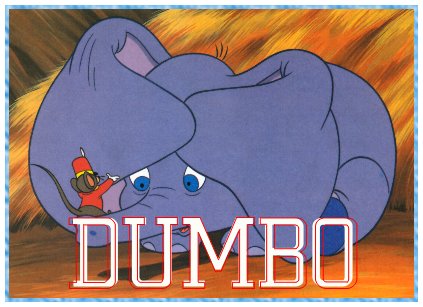 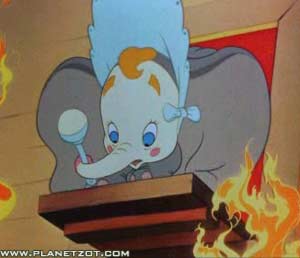 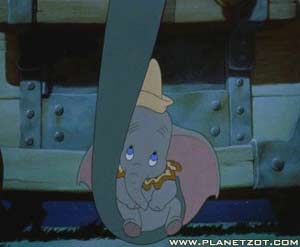 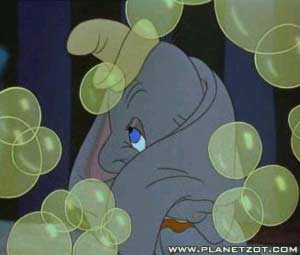 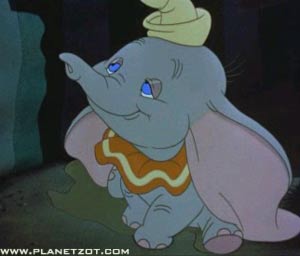 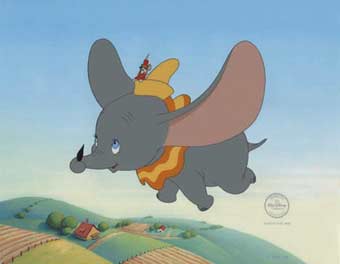 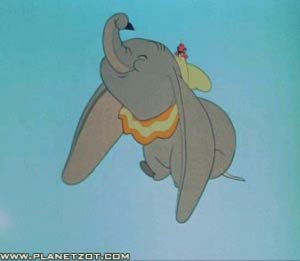 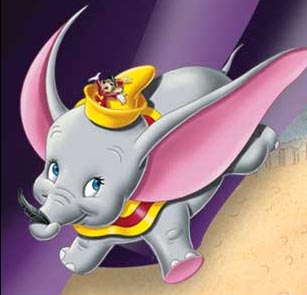 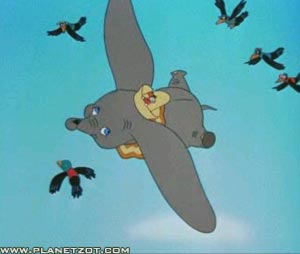 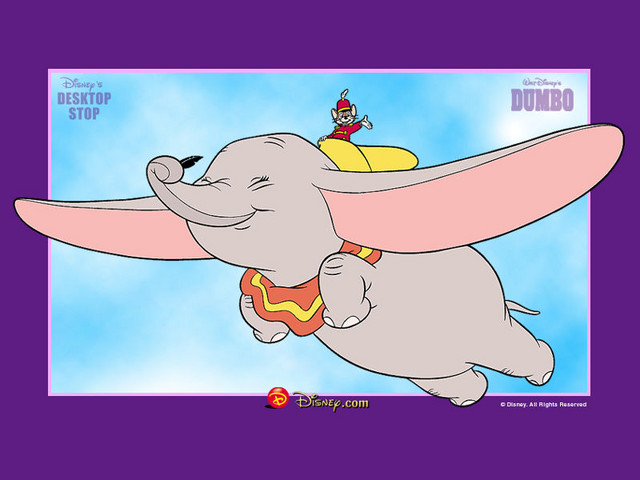 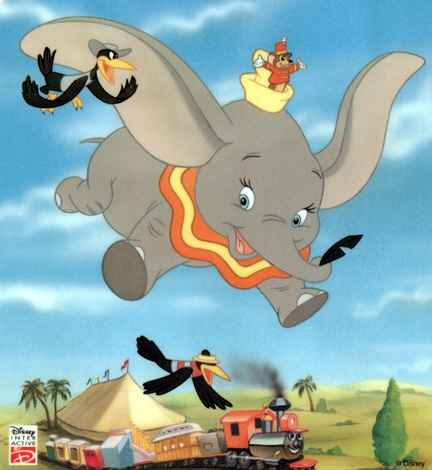 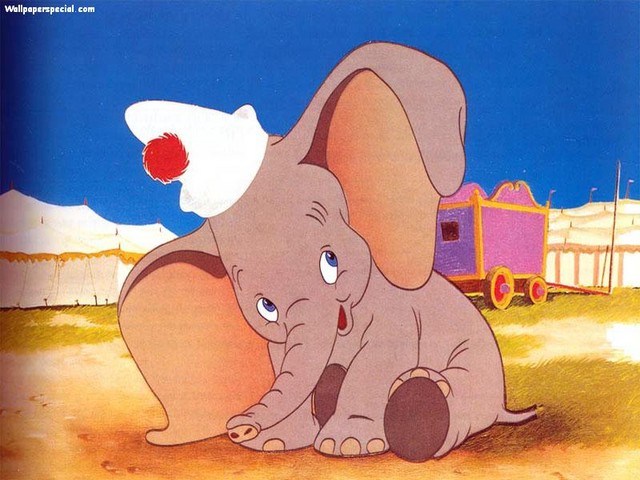 Aside from a few endearing squeaks and elephant calf noises, Dumbo doesn't have much to say.

Vote for Dumbo as your favorite hero here!

Learn more about Dumbo by visiting the links page, or head on back to the Heroes homepage.