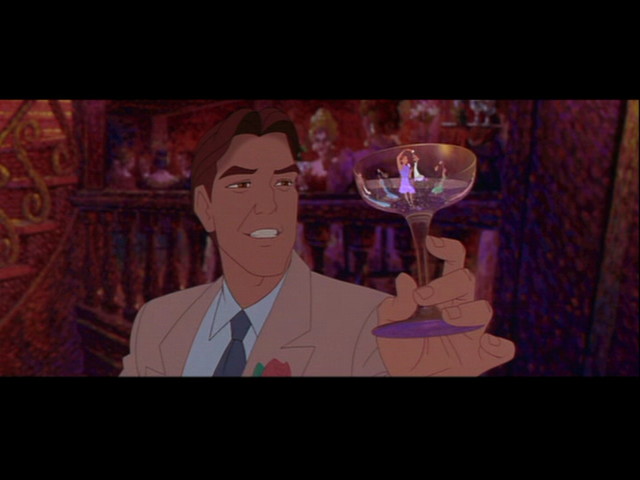 ...Paris holds the key to her past,
Yes, Princess, I've found you at last,
No more pretend,
You'll be gone, that's the end...

Paris Holds the Key to Your Heart
Ahrens/Flaherty

Dimitri is the hero of the 20th Century Fox film, Anastasia (1997). The story of the long-lost daughter of the Russian czar came to life in this film. Dimitri starts out as a con-man. His only goal is power and his only love money. Dimitri is a schemer and plans to have auditions for the long-lost Anastasia to collect the healthy reward. When he meets the scraggly orphan Anya, he's taken immediately by how alike she and the princess look. He and his partner, Vladimir, take Anya on a trip to Paris, having found their princess, teaching her everything she needs to know to convince the Grand Duchess Anya really is Anastasia. Along the way, their bickering sure enough hides an unspoken attraction, but all business, Dimitri puts it out of his mind. When, during Anya's interview with Sophie, the Grand Duchess's voluptuous first cousin, and the object of Vlad's affection, he realizes much to his own surprise that Anya really is the princess. She vaguely remembers a servant boy opening a door in the wall on the night of the siege of the palace, the night she went missing. Dimitri was the boy who saved them. When he sneaks in to see the Dowager Empress Marie, she calls him out as a con-man, onto his game and his auditions. Anya overhears, and storms out, slapping Dimitri across the face, furious at his deception and her seemingly misdirected emotions toward him. Dimitri coerces Marie again, and tells her his recently discovered truth about Anya's identity. Marie is skeptical, but when Anya proves that she has genuine memories from a childhood Marie remembers as Anastasia's, the two are reunited. Dimitri refuses the reward money, having had a complete and literal change of heart. He almost leaves Paris, broken about how things have turned out, but returns to the palace, finding Anya locked in a fierce battle with the traitorous sorcerer Rasputin. He helps Dimitri in defeating her, getting knocked out in the process. When he comes to, Anya and he elope, leaving Marie a note, and sharing a dance and their first kiss on the Seine.

Dimitri is voiced by John Cusack. His singing voice is povided by Jonathan Dokuchitz, while young Dimitri's small role is voiced by Glenn Walker Harris Jr.

This page is dedicated to Sophie, a friend of mine who has a "thing" for Dimitri. (that's not her real name...)
In a classic example of the love-hate relationship, Dimitri finds himself falling hard for the spunky Anastasia. Rasputin hates all the Romanovs, feeling they betrayed him, and vows to destroy every remaining descendant of the line. Stuck in limbo, he's always falling to pieces, and his sidekick is a sassy, good-at-heart albino bat named Bartok.
Want to know what I think?

This film is beautifully animated and much in the Disney style. I was instantly enchanted from the time I saw the trailer for this film, and the actual product delivered just what I had hoped. The relationship between Anya and Dimitri is very interesting and believable, the story (however historically inaccurate), is fun and exciting, and the music (by Broadway vets Stephen Flaherty and Lynn Ahrens) is among the greatest in recent animation history. This film has the token Don Bluth elements (such as the gratuitous cutesy animals characters, the rotoscoped human movement, etc.), but they make it a unique contribution to the animation world. Very highly recommended. 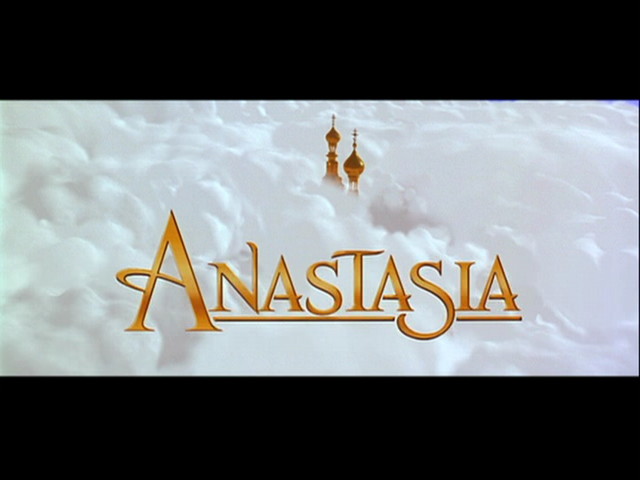 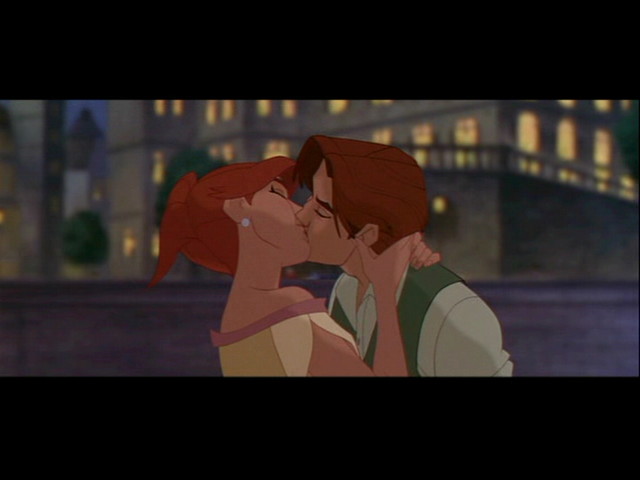 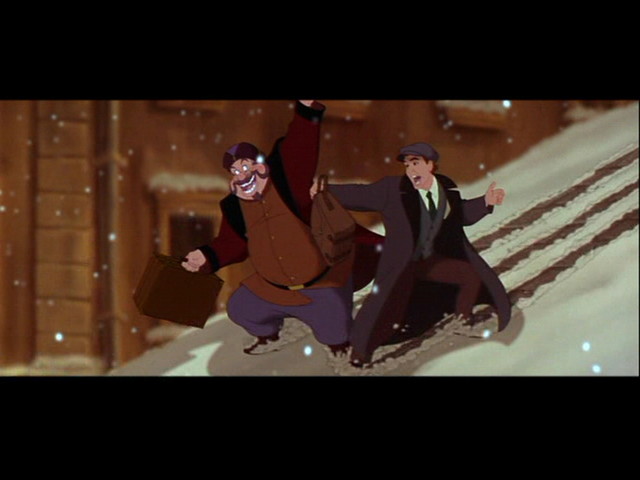 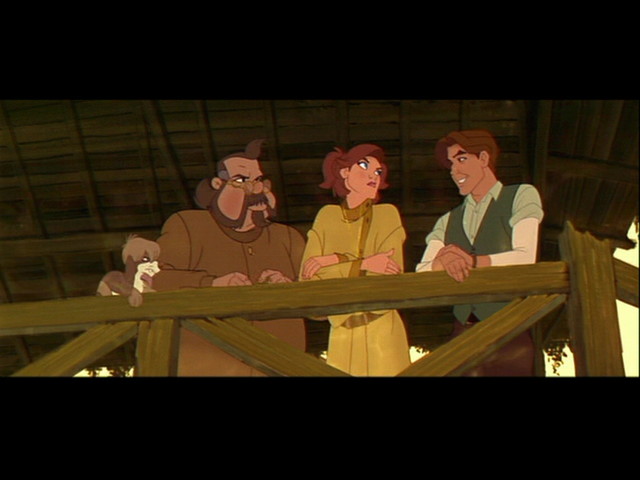 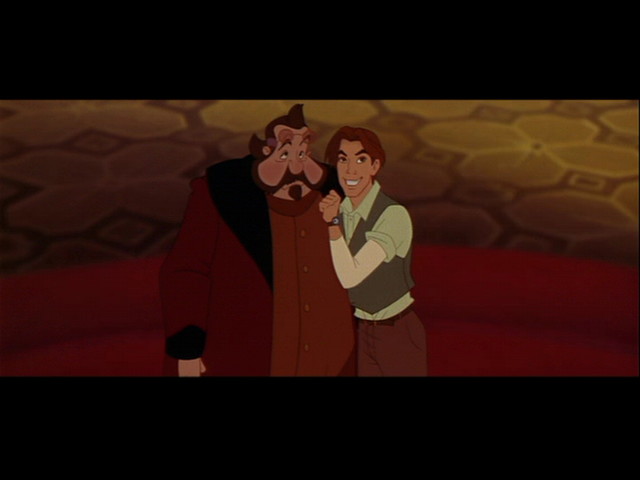 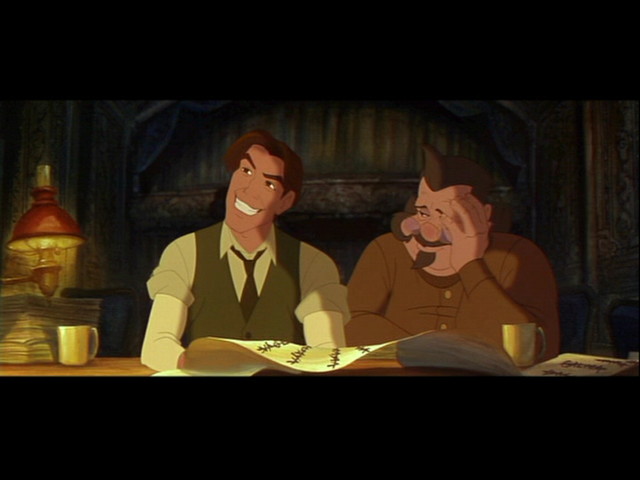 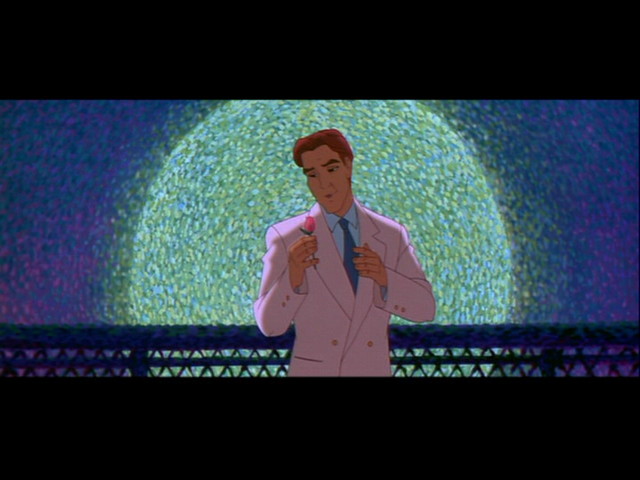 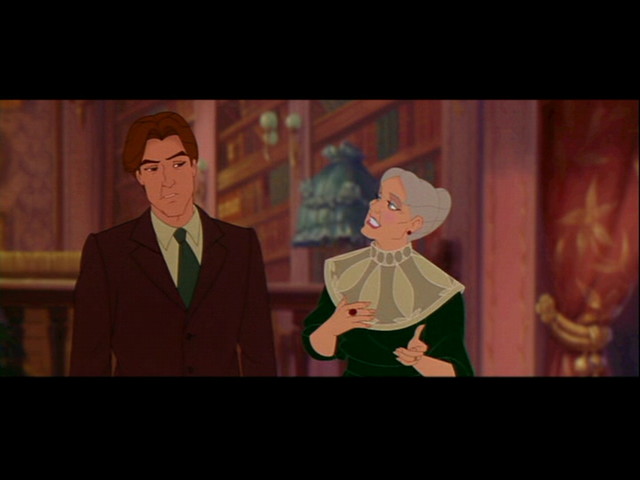 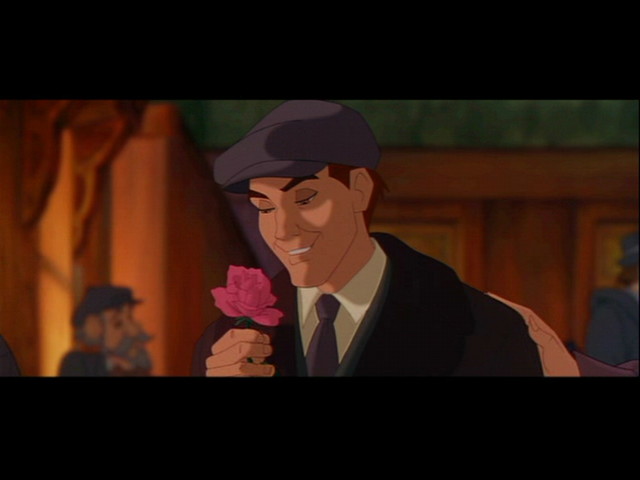 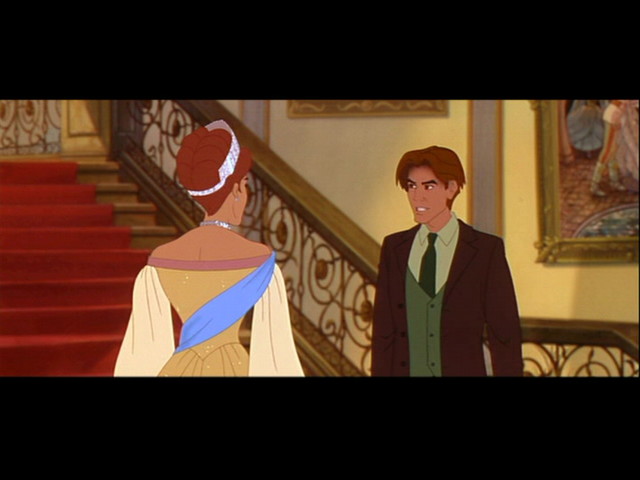 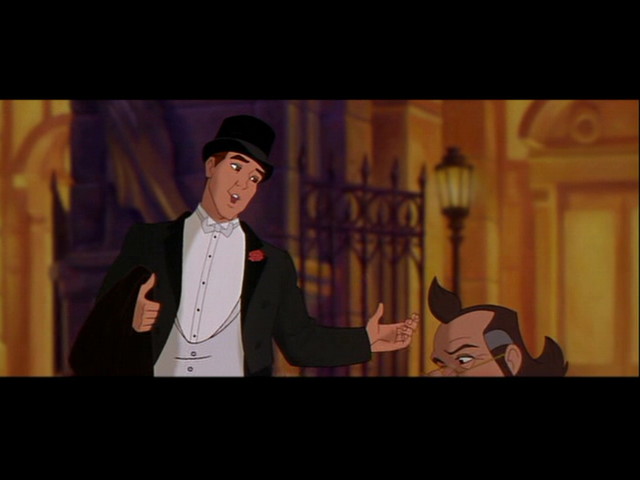 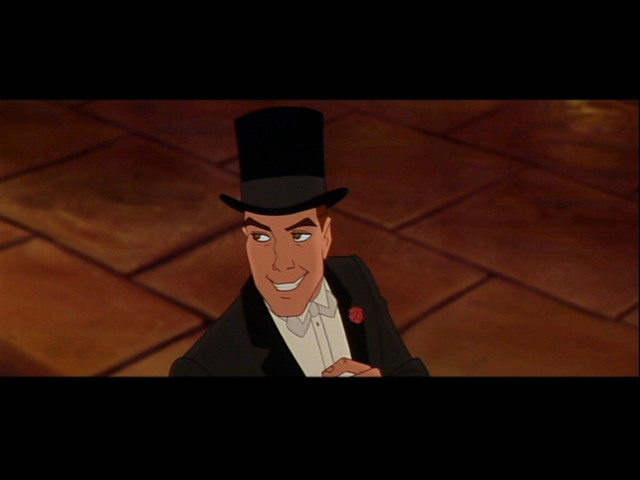 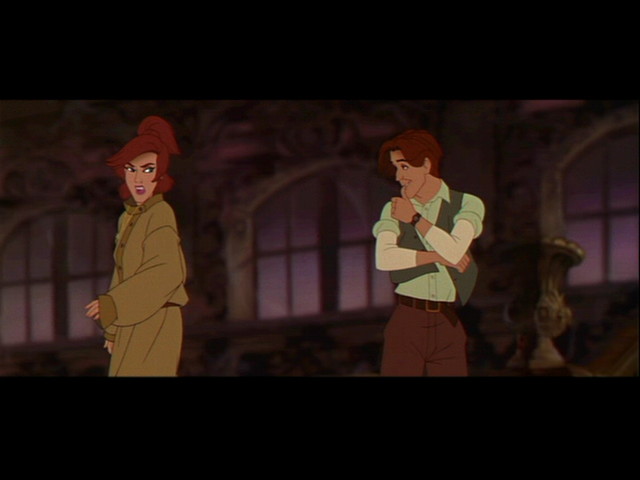 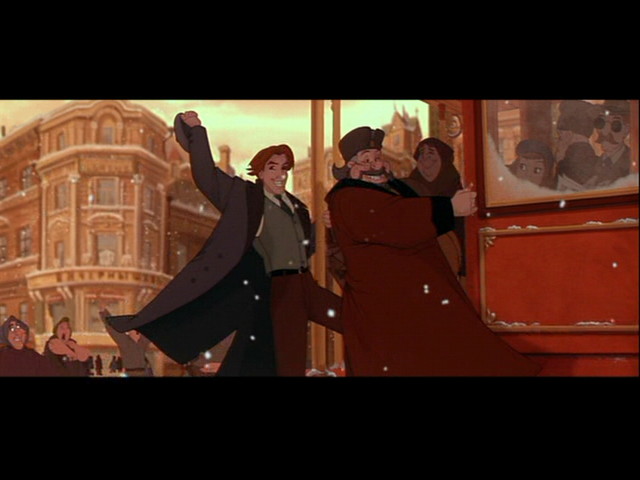 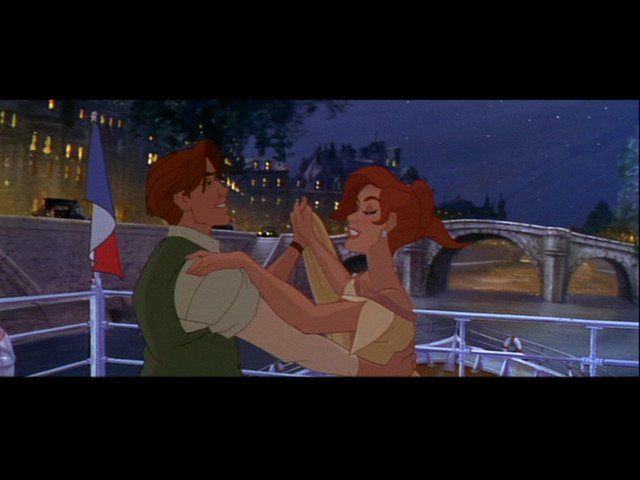 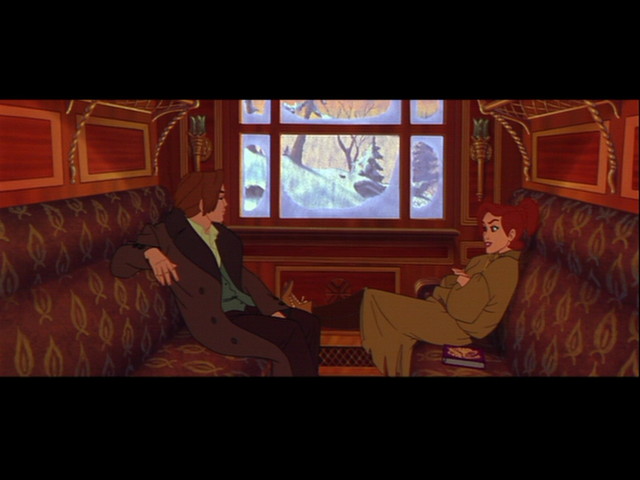 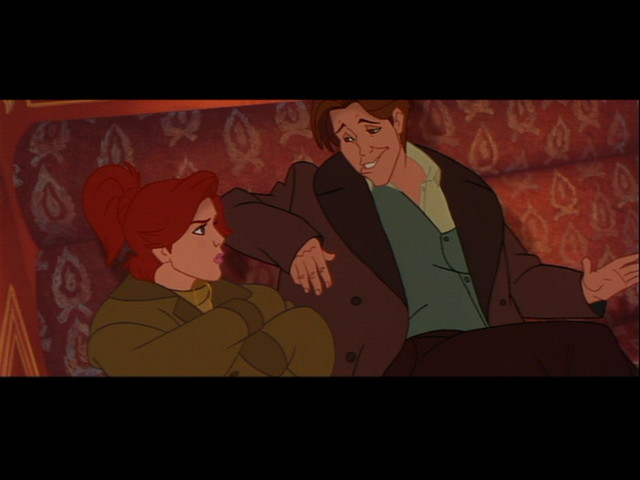 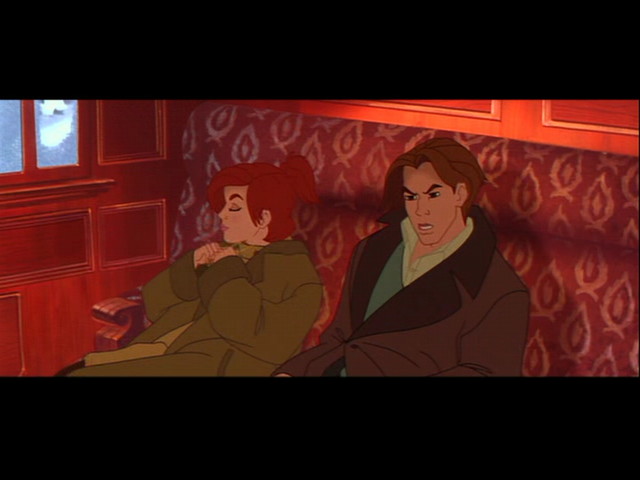 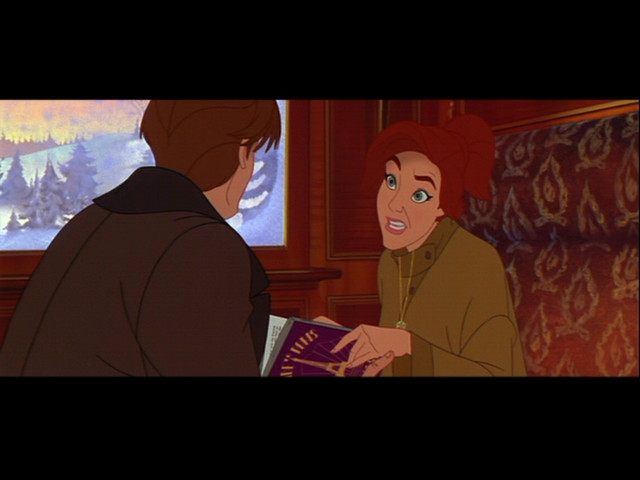 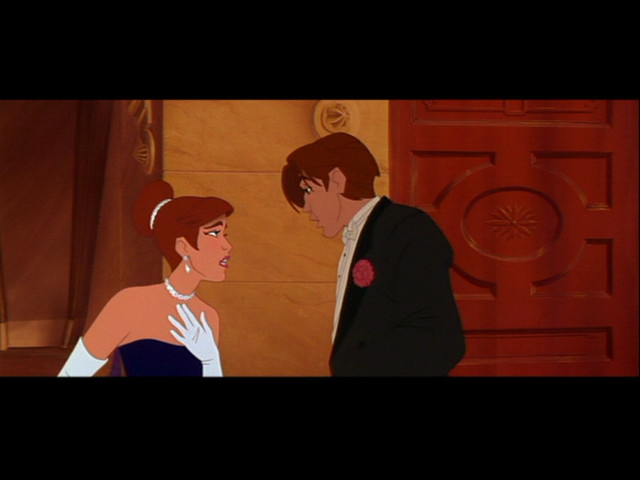 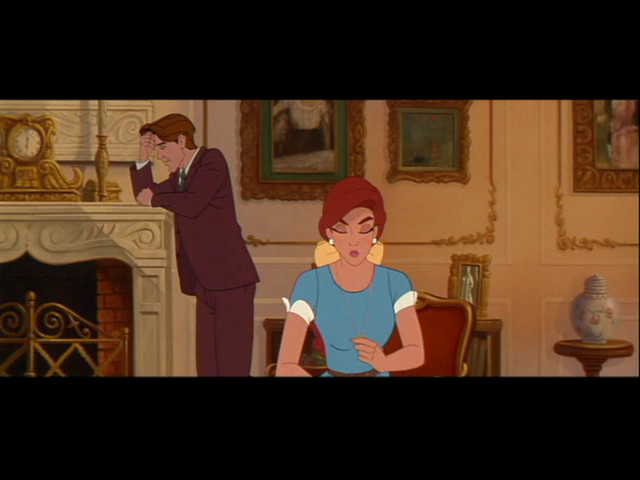 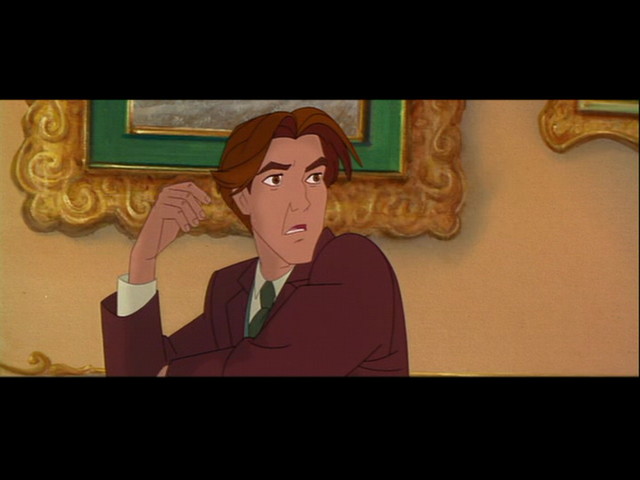 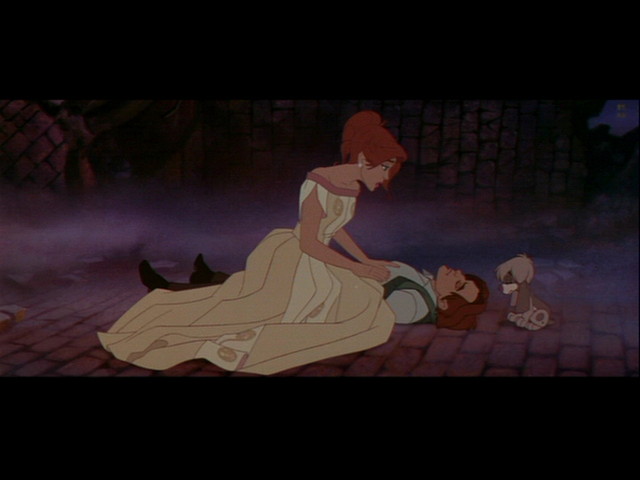 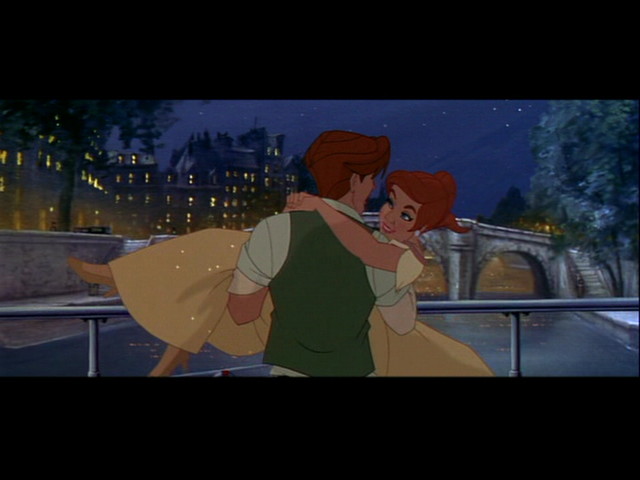 This was drawn by a very talented artist named Sarah Hermanutz.

Vladimir: She certainly has a mind of her own.
Dimitri: Yeah. I hate that in a woman.

Dowager Empress Marie: You'll stop at nothing, will you?
Dimitri: I'm probably about as stubborn as you are.

Vladimir: (after tempting Anya to be Anastasia) I'm telling you we're walking away too soon!
Dimitri: I'm telling you I've got it all under control... ok walk a little slower...

Dimitri: I don't want your money.
Dowager Empress Marie: What do you want then?
Dimitri: Unfortunately, nothing you can give.

Vote for Dimitri as your favorite hero here!