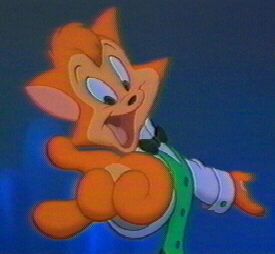 The vibrant and talented star of this film, Danny is a song and dance cat from Kokomo, Indiana who dreams of making it big in the pictures. He leaves behind his small town with high hopes for Hollywood, and is disappointed at the current state of affairs in the movie industry. It may be the Golden Age of Hollywood, 1930s, for the humans, but animals are rarely given starring roles, and are snubbed by talent scouts and film directors. Danny finds an animal talent agent, as well as his clients, and his receptionist, a sassy and stunning lady cat names Sawyer, whom Danny falls for almost immediately. When Danny lands a small role in Mammoth Pictures' The Li'l Ark Angel, the latest film of Darla Dimple, "America's Sweetheart, Lover of Animals and Children", he's thrilled until he realizes how small the part is. He knows his talent demands a more promising role, so he takes matters into his own paws, turning his one line into an impressive bit of music, but in so doing upstages Darla Dimple, who's playing the Li'l Ark Angel.

This is obviously a bit mistake, as Darla's true self is then unleashed, a brash, obnoxious, horrible child star of the worst degree, and she demands that the animals (whom she actually hates) respect her and keep their position. The director and crew have to agree, or face her further wrath, or that of Max, her gigantic ape manservant. All of the animals are booted from the set, with a promise they'll never work in Hollywood again.

Danny learns that all of the other animals (including the dancing-singing sensation, Sawyer)came to Hollywood with big dreams too, only to realize that humans are always given the starring roles, and animals are resigned to supporting cast, if that. Darla Dimple, a plan up her pink and puffy sleeve, invites Danny to her mansion, and informs him that if he wants to impress L.B. Mammoth, he needs to make his act big and loud, brassy and impressive. She pretends to call L.B. and set up a chance for Danny and his friends to perform at a press release, and Danny enlists the assistance of all the animals. Unfortunately, Darla's plan is unleashed as she instructs Max dramatically to turn on all the movie set weather devices, flooding the sound stage, and bursting down the door, right onto L.B., the director and the press, and into the busy studio streets. When the tidal waves dies down, and the animals are promised they'll never work in Hollywood again, Darla appears and mocks the animals and their situation, laughing at the idea that animals could sing and dance in films. Sawyer lashes out at Danny for giving her and the others false hope, calling him unrealistic and foolish. Defeated, Danny prepares to go back to Kokomo, defeated, until Pudge the Penguin and he come up with an idea.

Danny sneaks into the studio and invites all of the animals to the premiere of Darla's film, and after the film rolls (and a fairly intense battle between Max and Danny atop Graumann's Chinese Theater), Danny addresses the audience, informing them that he and his friends are going to sing and dance for them, as requested, Danny says, by Miss Darla Dimple. What follows is a spectacular production number by the animals, while Darla's insane attempts to stop them only results in more flash and fireworks, and in the end, Darla screams the truth about her sabotage inadvertently into a microphone for all to hear, and the production number is a resounding success. The animals are given starring roles from then on, creating a number of amusing parodies of classic films. Danny and Sawyer find the obstacles keeping them apart have long been lifted.

Danny is voiced by Scott Bakula.

Danny falls immediately in love with the beautiful and talented, but jaded Sawyer, once a singer and a dancer, now a receptionist at an animal talent agency. Darla Dimple is like cotton candy... that rots your teeth. She has a completely false sweet demeanor, but she is the most devious child actor imaginable. And what do I think about Cats Don't Dance and Danny from Kokomo?

I didn't see this film for ages, mostly because when it came out, I was of the "If it's not Disney but looks like Disney, it's a rip off" mindset back then, and also because it wasn't very popular, and really came and went out of theaters (which doesn't really mean anything in retrospect, according to my theory), but when I finally saw it just a few years ago, I was immediately transfixed. The story is incredible, the characters interesting and diverse, Darla Dimple is deliciously devious, and the animation is spectacular! The style is reminiscent of classic WB and classic Hollywood, with its long, straight lines and bright colors, and it's very appealing and charming. A lot of people have interpreted this film as being a parallel for black actors in the 30s-50s, only being allowed certain roles while the white people are given the leads. It could very well mean that, but I just as well call it a parallel for any group that's ever been discriminated against, religious, racial, etc. It's about believing in yourself and your talents, standing up for your rights and what you believe in, and optimism. It's magic.

Some words from Danny the Song & Dance Cat!

Danny: Come on, Sawyer. Your life isn't back in that office, it's here. Dance with me.


Danny (singing): Since I was a little kitten, I've had a dream! My name in lights, "Danny the song and dance cat!

Sawyer: You're dreaming Danny.
Danny: Maybe I am, but so were you just a few minutes ago.

Danny: If you're willing to except what they think of you, then you can go. I almost did.

Danny: They say that curiousity killed the cat, I'm living proof that that's a lie!

Danny: If we all work together, we can make our dreams come true. Let's show the world what we can do!

Danny: See you in the movies!

Vote for Danny as your favorite hero here!

All done? Check out the links page for resources I've found about Danny, or back to the Heroes homepage with ye.