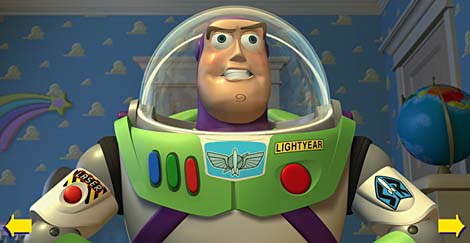 But no, it can't be true
I could fly if I wanted to
Like a bird in the sky
If I believed I could fly,
Why, I'd fly!....
Clearly I will go sailing no more

Buzz Lightyear arrives as one of Andy's birthday presents, the coolest new action figure on the toy market. Unfortunately for Woody, Andy's favorite and the leader of the toys, Buzz soon starts to take over as Andy's favorite. Buzz, on the other hand, is positive he's an actual Space Ranger, and that he has to get back into space to defeat the evil Emperor Zurg. Woody tries to talk some sense into him, but everyone writes him off as jealous of the awesome new action figure in town, with all his blinking lights and moving parts. Buzz and Woody get in a fight on the way to Pizza Planet with Andy, and are knocked out of the van, and become Lost. After hitching a ride on a Pizza Planet delivery truck, Buzz is tricked into believing Pizza Planet is actually a Spaceport, and when both Woody and Buzz are found by Andy's vicious, toy-destroying next-door neighbor Sid, they are in grave peril. Buzz, still delusional, starts to think about Woody's constant reminders that Buzz is just a toy, and in an attempt to prove to Woody and himself that he IS Buzz Lightyear and he CAN fly, he jumps toward a window, and of course, falls down the stairs, breaking off an arm. Broken, Buzz is resigned to play Tea Party with Sid's little sister, Hannah, and her mutated dolls (victims of Sid's experiments). Woody talks some sense into Buzz yet again, saying that he may just be a toy, but he's a COOL toy, and kids like Andy need toys. Buzz and Woody work together to escape from Sid, and help the toys that he has already tormented, and barely make it into the minivan, in a box next to Andy, as it takes Andy and his family to their new home.

In the sequel, Buzz leads a search and rescue party to find and bring back Woody, who has been toy-napped. This time it's Woody who needs some sense talked into him, and Buzz has an interesting experience when he runs into another Buzz Lightyear toy at Al's Toy Barn, and is forced to live what he put Woody and the others through when he first came to Andy's house.

The story follows Buzz Lightyear as he is recalled to Taiwan after a series of malfunctions. Learning of a productwide recall, all the toys in Andy's room, under Woody's leadership, head to Taiwan to save Buzz from doom.

Buzz is voiced by Tim Allen in all of his film appearances.

Buzz had a minor relationship with a fellow Space Ranger, Mira Nova, in the prequel film, but found a real companion in Jessie, the yodeling cowgirl doll from Woody's popular TV program. Buzz and Woody are first butting heads constantly, but in the end they work together to defeat their common villain, the terrorizing Sid Phillips. In the sequel, Buzz finds an interesting threat in another Buzz Lightyear doll, but in the end, Buzz Lightyear's sworn enemy and constant nemesis is the evil Emperor Zurg. My personal thoughts and analysis...

This movie was groundbreaking on so many levels, and even now, it and its sequel are just hilarious. The characters and story, however, are what save it, not the medium. This is a buddy comedy, a road comedy, and it pulls off the story brilliantly. Buzz in particular is an interesting character, undergoing probably the most noticable change. He's delusional and arrogant at first, then is seriously humbled, and has to face his past and repent, and move on. A great parallel for anyone who has to make a harsh but true realization. This is a great film, with excellent music and stunning, crisp visuals. Point of interest: Early concept drawings of Buzz indicate an early character name was Lunar Larry. 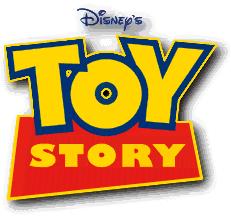 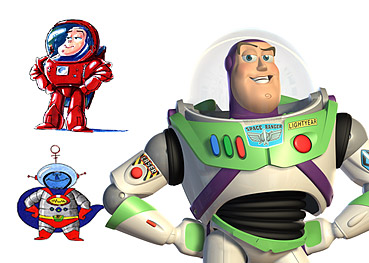 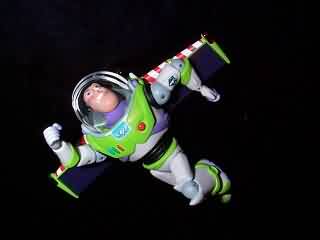 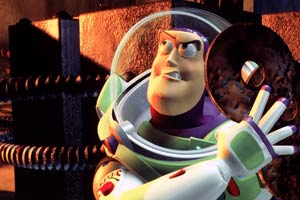 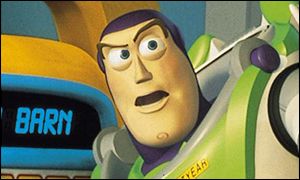 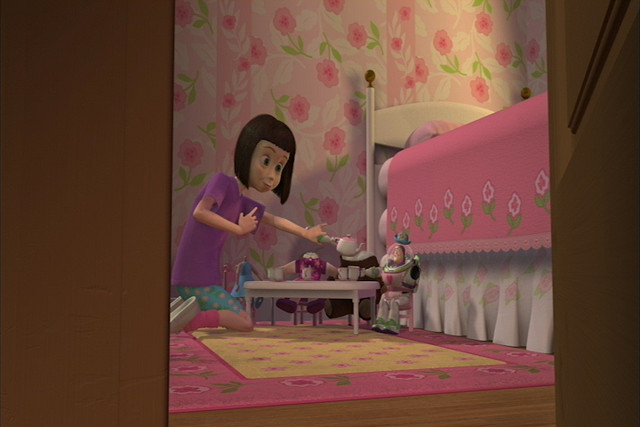 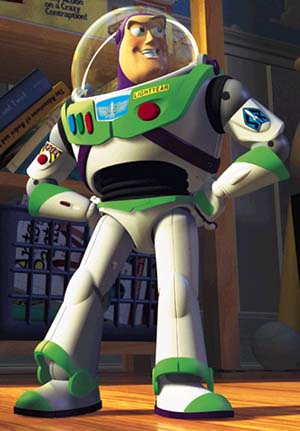 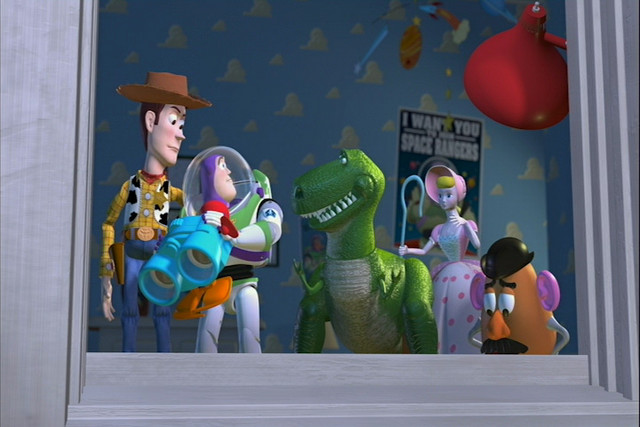 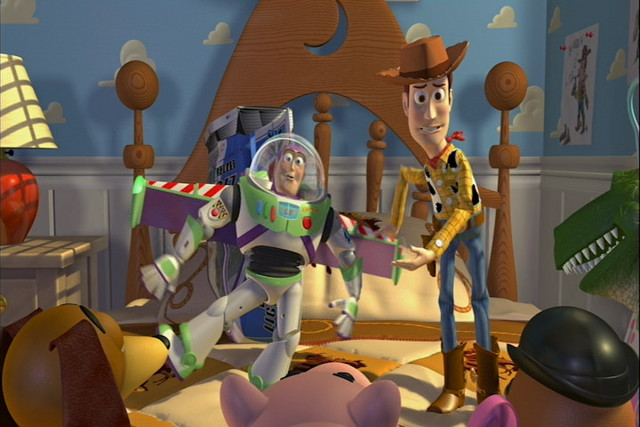 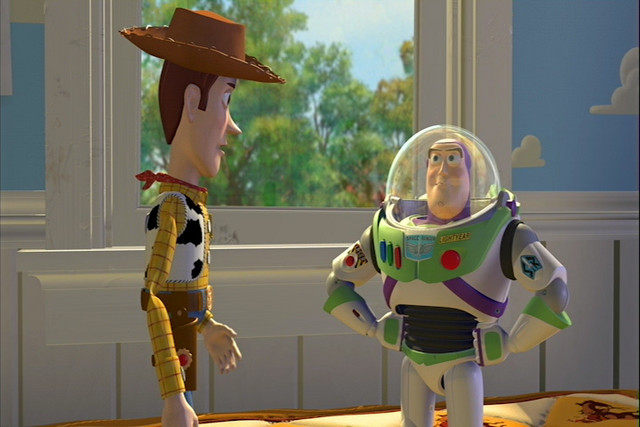 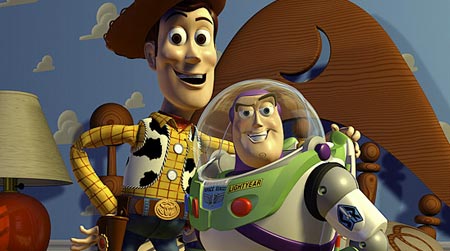 Buzz: Right now, poised at the edge of the galaxy, Emperor Zurg has been secretly building a weapon with the destructive capacity to annihilate an entire planet! I alone have information that reveals this weapon's only weakness. And you, my friend, are responsible for delaying my rendezvous with Star Command!
Woody: (pauses and looks incredulous) You! Are! A! Toy! You aren't the real Buzz Lightyear! You're - you're an action figure! (holds hand up to eyes indicating something small) You are a child's play-thing!
Buzz: You are a sad, strange little man, and you have my pity. Farewell.
Woody: Oh, yeah? Well, good riddance, ya loony.

Buzz: To infinity, and beyond!

Buzz: I just want you to know that even though you tried to terminate me, revenge is not an idea we promote on my planet.
Woody: Oh. Well, that's good.
Buzz: But we're not on my planet, are we?

Woody: Buzz! You're flying!
Buzz: This isn't flying. This is falling with style!

Buzz: How are you fixed for fuel? Are you still using fossil fuels, or have you discovered crystallic fusion?
Woody: Well, we have double-A's.

Buzz: How dare you open a Space Ranger's helmet on an uncharted planet? My eyeballs could have been sucked out of their sockets!

Buzz: What's going on?
Woody: Nothing that concerns you Space Rangers. Just us toys.
Buzz: I'd better have a look anyway. (look through binoculars) Why is that soldier strapped to an explosive device?
Woody: (moves binoculars) That's why. Sid.
Buzz: Sure is a hairy fella.
Woody: No, no. That's Scud, you idiot. That's Sid.
Buzz: You mean that happy child?
Mr. Potato Head: That ain't no happy child!
Rex: He tortures toys, just for fun!

Buzz: I'm Buzz Lightyear. I come in peace.
Rex: Oh, I'm so glad you're not a dinosaur!

Buzz: This is an intergalactic emergency. I need to commandeer your vessel to Sector 12. Who's in charge here?
All aliens: (pointing up) The Claw!
Alien #1: The Claw is our master.
Ailen #2: It decides who goes and who stays.
Woody: Oh, this is ludicrous.

Woody: (trying to get Buzz into Molly's stroller) It's a special spaceship, I just saw it.
Buzz: You mean it has hyperdrive?
Woody: Hyperactive hyperdrive, and astro... uh... turf.

Woody: Listen, Lightsnack, you stay away from Andy. He's mine, and no one is taking him away from me.
Buzz: What are you talking about? Where's that bonding strip?

Woody: Aaaaah! This is the part where we blow up!
Buzz: Not today.

(Woody finds Buzz dressed up as "Mrs. Nesbitt" and in the company of two headless dolls)
Woody: What happened to you?
Buzz: One minute you're defending the whole galaxy, and, suddenly, you find yourself sucking down Darjeeling with Marie Antoinette... and her little sister.

Buzz: Do you know these life forms?
Woody: Yes, they're Andy's toys.

(Buzz deploys his wings)
Hamm: Wow. Impressive wingspan. Very good.
Woody: Oh, what? What? These are plastic. He can't fly.
Buzz: They are a terillium-carbonic alloy, and I can fly.
Woody: No, you can't.
Buzz: Yes, I can.
Woody: Can't.
Buzz: Can.
Woody: Can't, can't, ca-an't.
Buzz: I tell you, I could fly around this room with my eyes closed.
Woody: Okay, Mr. Lightbeer, prove it.
Buzz: All right then, I will.
(after proving that he can "fly")
Buzz: Can!

Woody: Hey, look, everybody! It's the real Buzz Lightyear!
Buzz: You're mocking me, aren't you?

Buzz: (marveling at the interior of Pizza Planet) What a spaceport!

Woody: (thinks Buzz has gone crazy) Let's get you out of here Buzz...
Buzz: Don't you get it? (points to a doll's hat on his head) You see the hat? I am Mrs Nesbitt!

Buzz: I don't believe that man ever went to medical school.

Bo Peep: This is for Woody, when you find him. (She gives Buzz a long kiss)
Buzz: (cough) Um, okay, but it won't be the same coming from me.

Rex: How do we get inside?
Buzz: Use your head.
(the toys use Rex as a battering ram)
Rex: But I don't wanna use my head.

Hamm: Where did you get the cool belt, Buzz?
Buzz Lightyear #2: Well, slotted pig, these are standard issue.

Mr. Potato Head: Can we stop? My parts are killing me.
Buzz: How about a quick roll call? Everybody here?
Mr. Potato Head: Not everybody.
Buzz: Who's behind?
Slinky Dog: Mine... (Slinky Dog's back half catches up with the group)

Buzz: Tell me I wasn't this deluded.
Buzz Lightyear #2: No back talk!

Buzz Lightyear #2: Has your mind been melted? You could have killed me, Space Ranger. Or should I say "traitor."
Buzz: I don't have time for this.

Buzz Lightyear #2: You killed my father.
Emperor Zurg: No Buzz, I am your father.

Emperor Zurg: Ahhhhhhhhhhhhhhh!
Rex: I did it! I finally defeated Zurg!
Buzz Lightyear #2: (forlornly reaching down at the abyss) Father...

Buzz: (looking at another toy of himself) Am I really that fat?

Buzz: Are you still worried?
Woody: About Andy? Nah. I'll be fun while it lasts.
Buzz: I'm proud of you, cowboy.
Woody: Besides, when it's all over, I have Buzz Lightyear to keep me company, for infinity and beyond.

Woody: I have no choice, Buzz. This is my only chance.
Buzz: To do what? Watch kids from behind glass and never be loved again? Some life.

Buzz: Woody once risked his life to save mine, and I couldn't call myself his friend if I wasn't willing to do the same. Now who's with me?

From Buzz Lightyear of Star Command: The Adventure Begins:

Buzz: This diabolical plot can only be the work of the sworn enemy of the Galactic Alliance - Evil Emperor Zurg!
Warp Darkmatter/Agent Z: (as Warp Darkmatter) What plot? You think Zurg is behind every kitten stuck up a tree!
Buzz: The fiend! Why can't he leave kitty-cats out of his nefarious schemes?

Vote for Buzz Lightyear as your favorite hero here!