Buster J. Bunny is a nice guy with an edge. He's sincere and friendly, but if you cross him, you won't soon forget it! As co-host and star of the show, he interacts directly with the audience a lot, which is fun.

"Buster is a winner, a high-energy teen with lots of ideas and dreams. He is what every kid wants to be: a fun-loving mischief-maker who gets away with just about everything. He has the sassiness of Bugs Bunny, but has to work a little harder because he's younger and still learning. He has the energy, enthusiasm and resourcefulness of Andy Hardy which carries him through all troubles he encounters.

Buster is able to talk just about anybody into just about anything. He's an instigator. He knows how to stir things up, and how to talk his pals into engaging in some wild scheme or adventure. He knows everyone in Acme Acres, and he knows them better than they know themselves. He's the common friend who ties together his eccentric pals -- Babs, Plucky, Hamton, Shirley and Fifi. He is constantly pointing out the amusing oddities of each of the characters. Buster has reoccuring conflicts with Elmyra, who wants to hug and love him to death; Montana Max, who wants to bully him; and Plucky Duck, who wants to steal his spotlight. He tolerates Plucky's ego because he recognizes the duck's loveable side.

Buster's the little guy who pokes fun at authority, the pomposity, the egotism of those who take themselves too seriously. He is not mean or malicious; that is, he would never try to hurt someone's feelings.

Although Buster, as the group leader, drags his pals into outrageous adventures for the sake of a good time, sometimes it's for the sake of someone who needs help. Buster stands up for the weak and helpless. He'll go to battle when some 'little guy' is being abused by a heavy. Declares Buster: 'Why don't ya pick on someone your own shoe-size?" Buster's victories will be victories for the audience as well.

Buster's ears are like two extra limbs. He can run on them, throw with them, play "guess who" with them, and do any other schtick one could imagine.

At school, Buster maintains a B+ average; he studies hard, but would never admit it to his friends. His favorite class is "Wisecracks 101," taught by his hero and mentor, Bugs Bunny. Buster is popular with his classmates and a star on their sporting teams. He's Student Council President, and has been voted "most likely to drive the faculty nuts."

He's fascintaed by the lack of redeeming social values in his enemies. To Buster, the wild eccentricities of these heavies are "a total crack-up." Occassionally, a foe insults or attacks Buster's honor. "It's time to party -- Buster style!" declares the rabbit. The enemy doesn't stand a chance against the quick-witted Buster.

About Buster and Babs:

Buster and Babs Bunny (no relation!) are the stars of "Tiny Toon Adventures." In each half hour, we share their lives in Acme Acres, where they are the most visible and vocal denizens. Yes, Plucky, Hamton, Monty, Elmyra, Fifi and Shirley often share the spotlight with our hosts in some wild adventure or another, but we generally find Buster and Babs at the center of the storm.

When Buster and Babs introduce themselves as Buster Bunny and Babs Bunny, they say in unison: "No relation." Like any good comedy team, Buster and Babs play off each other. Babs is a wild, free spirit who gets her laughs by pulling out all the stops. Buster cooly hangs back and gets the big laugh by raising a knowing eyebrow or making a sly comment to the camera, or by quietly, secretly upstaging his energetic costar.

Buster and Babs are best friends, and have been for a long time. Someday they may get a romance going; but they're still a little young for that now. Any amorous by-play between the two of them is strictly for a laugh.

Although each of them is quite unpredictable, particularly when together, Buster and Babs do have a number of running gags. When Buster gets irritated with Babs he calls her Barbara Anne Bunny, which she hates. The pair often appears as "The Vanderbunnies," rich preppies who have "just dropped in from the Hamptons." They act bored and indifferent about everything. This bit always works on Monty, who is convinced they're as rich as he is.

Buster was voiced by a couple of people, including Charles Adler and John Kassir.

Buster's girl, on and off I suppose, is the sassy and joke-cracking Babs (Barbara Ann) Bunny... no relation... Buster doesn't really have any major nemesis, although he's fallen prey more than once to the amorous, animal-loving Elmyra's clutches, as well as being the victim of tiny mogul Montana Max's greedy schemes.

Pictures of Wakko and the Warners 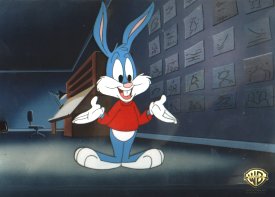 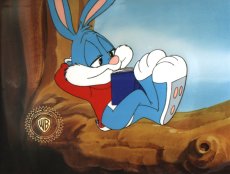 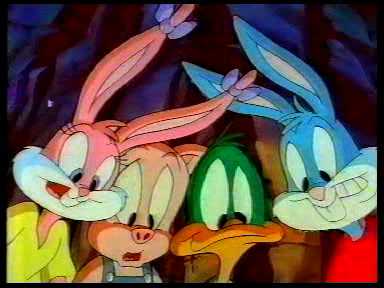 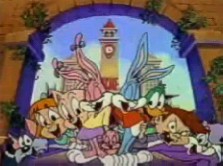 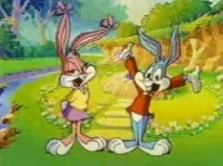 Buster: It's time to party, Buster-style!

Buster: This is more fun than a rabbit oughta have.

Buster: Are we working from the same script?

Buster: I really should have come to rehearsals.

Buster: Rope it in, Babs. Tie it down. Tape it back.

Buster: Here's a little ditty.
Babs: Ditty what?
Buster: Ditty pay you for that joke?

Buster: (about Taz) He's basically a drooling garbage disposal, but found to lovable by people with very little brains.

Buster: Babs, grab the life saver!
Babs: Who can think of candy at a time like this?

(after a long, toon-type, water battle)
Buster Bunny: I do this water thing to Babsy through the entire video.

Buster: You see Babs, I told you music was the universal language!

Buster: Do your ears look better dry?... or wet?

Babs: Why, Buster Bunny, are you falling for me?
Buster: (as they fall down a waterfall) You might say that!

Vote for Buster as your favorite hero here!