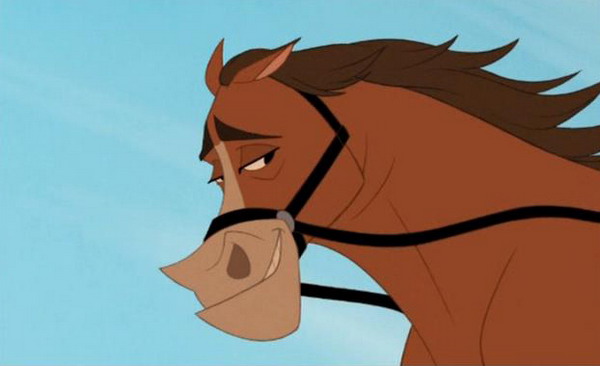 Buck is the unlikely hero from Home on the Range, Disney's last (to date) traditionally animated film. At the start, Buck is dissatisfied with his humdrum existence as Sam the Sheriff's horse, spending the days on the plains playing tic-tac-toe in the dust with Rusty the dog, and hassling the cows from Patch of Heave. Subject to delusions of grandeur, Buck would rather be out taking name and putting the drop of bad guys, so when the grim and gruff Eastwood-esque bounty hunter Rico (who even the flies shush for) arrives and asks to use Buck as his mount for his next job, Buck is ecstatic. Buck's ego is fueled as he considers himself Rico's "partner", and he insists that he and Rico are going to catch the notorious, hypnotic yodeling, land-greedy cattle rustler, Alameda Slim, before Maggic, Grace and Mrs. Calloway do. Buck is also prone to break out into fits, whirling from one dramatic fighting post to another, and when Rico notices Buck's erratic behavior, he asks for a new horse, saying Buck is "too skittish around cows". Buck is devastated when Rico's saddle is removed, and he vows to take in Slim by himself, but ultimately must join forces with the bovines. His resolve is solidified when he realizes his hero Rico is actually a renegade, keeping the authorities off the trail of Slim for a hefty price. Alone, the animals weren't really able to get much done, but as a team, Buck proved that he was one of the good guys.

For the most part, Buck's greatest enemy is himself and his ego. He's often butting heads with the cows, but by the end, he's a good guy, and his hero worship of Rico dies down when he realizes what kind of guy Rico really is, and he helps the girls lasso Alameda Slim and save the farm. So what do I think about 2004's least successful animated film?

Okay, this film got a LOT of flack when it was released. Those who saw it (which were relatively few, according to box office sales, which of course, if you look at my first theory regarding such is regards to quality, you'll see that doesn't really matter that much...) gave it mixed reviews at best. Critics panned it, and most fans, disenchanted with Disney's fare in recent years, didn't even bother with it. I did, however, and was glad I did (I even saw it twice in the theater!). Yes, it is about cows, and yes, the lead character is voiced by Roseanne, but the good things about this film far outweigh the bad. The look and feel is refreshingly old-school Disney, the color scheme is vibrant and interesting, and every frame looks crisp and clean. The old West is something Disney hasn't ventured toward in many years, and the effect is quite charming. The somewhat ensemble cast (including all of the farm animals) is interesting and captivating, and the story is strong. Buck, in particular, I thought would be annoying (not too fond of Cuba's latest, and the preview for this admittedly didn't look promising), but the animators and story crew were able to make his ego tolerable, but obnoxious enough that when he has a change of heart and changes his tune, his switch is believable and endearing. He's definitely one of the more interesting characters in the film, and certainly has a more dynamic character arc than most of them.

This is the last 2D animated film for now from Disney, and it seems like a terrible loss. Such a legacy, and now it's just... gone... Well, I have faith in the industry... 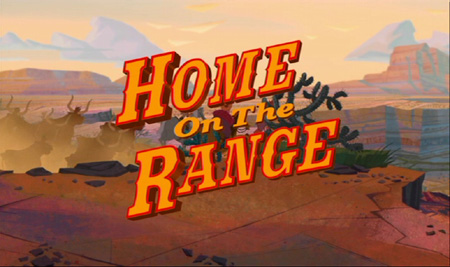 It's Buck, the Wonder Horse! 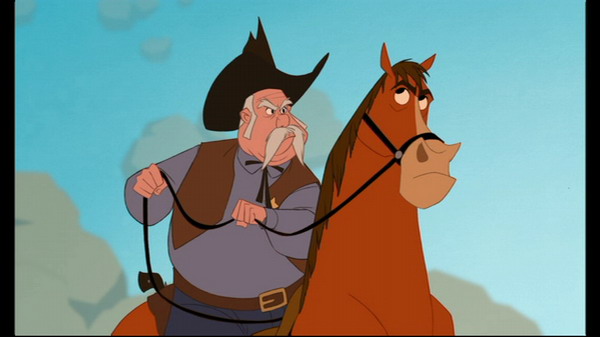 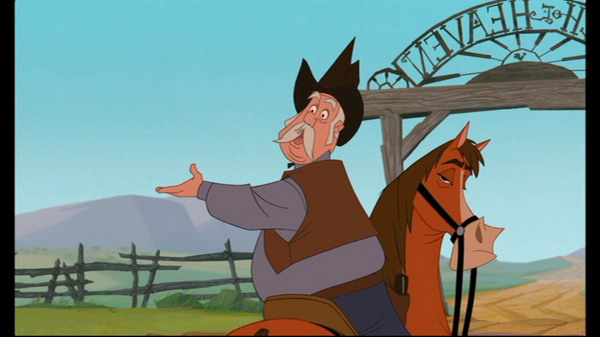 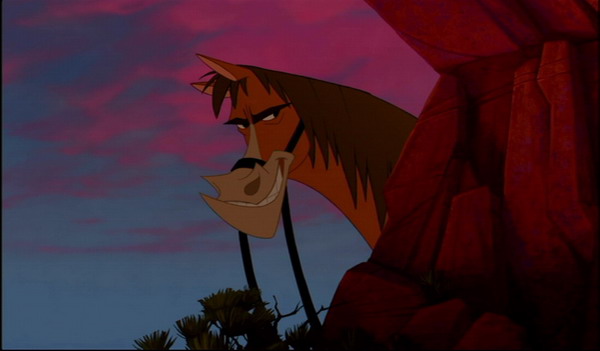 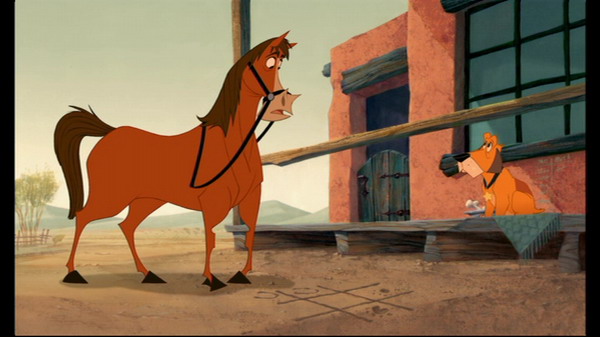 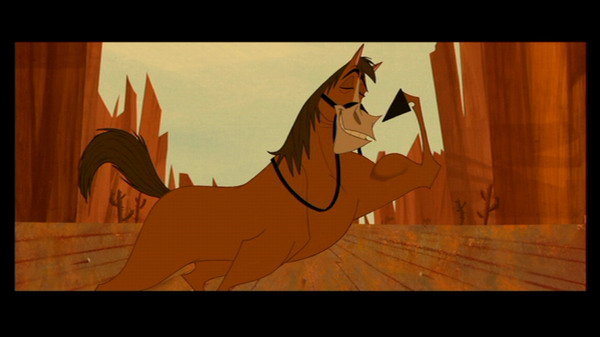 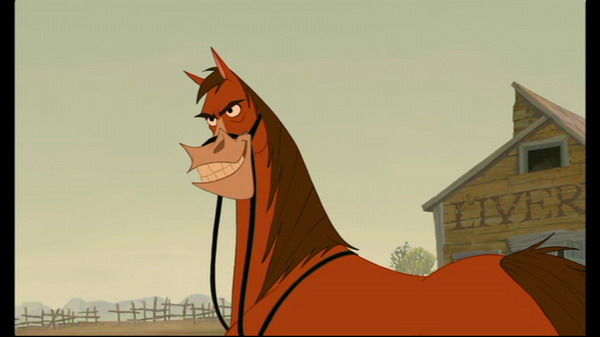 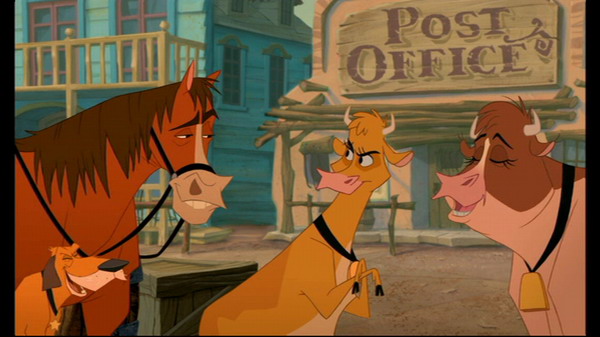 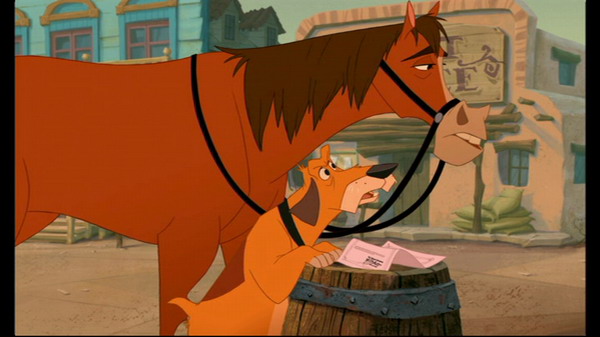 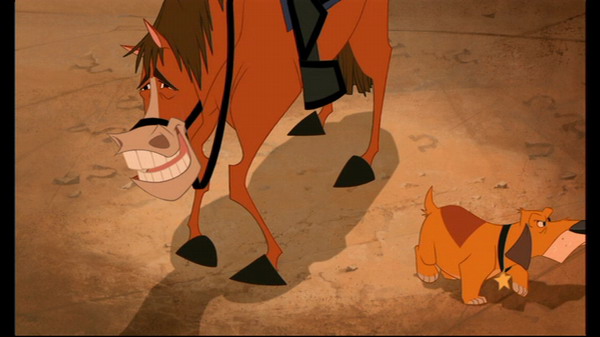 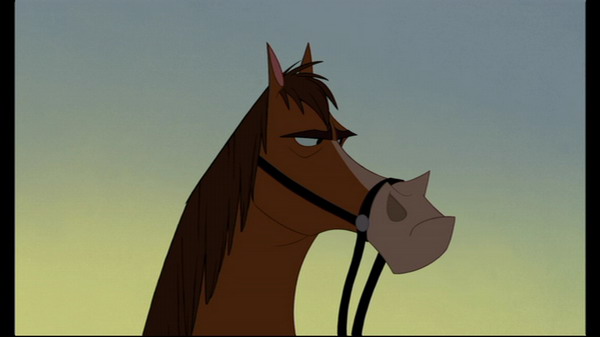 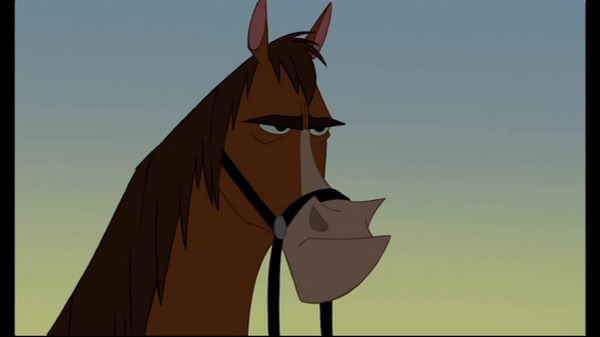 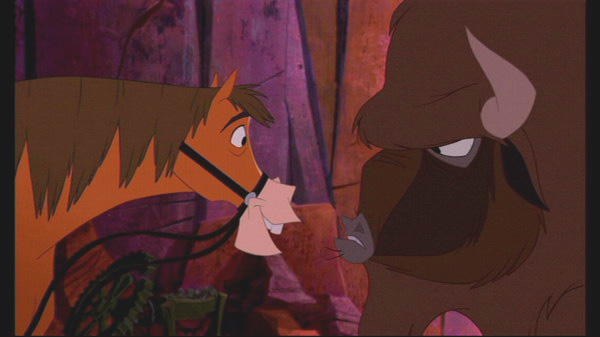 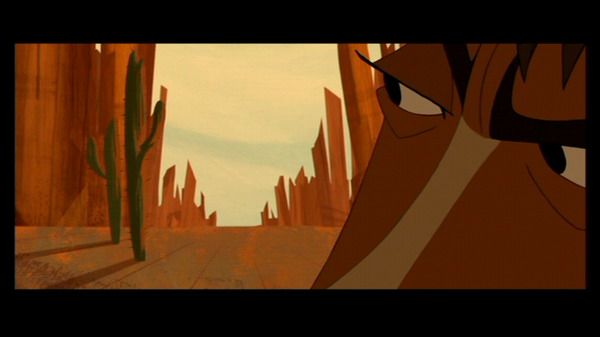 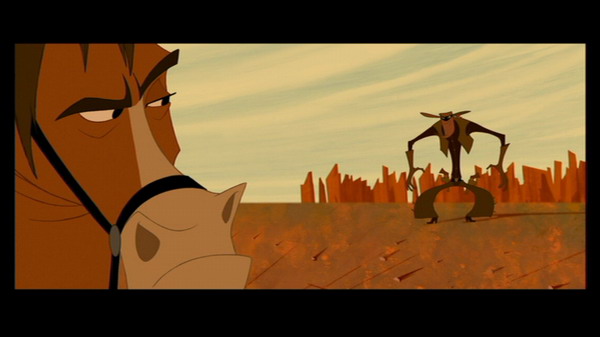 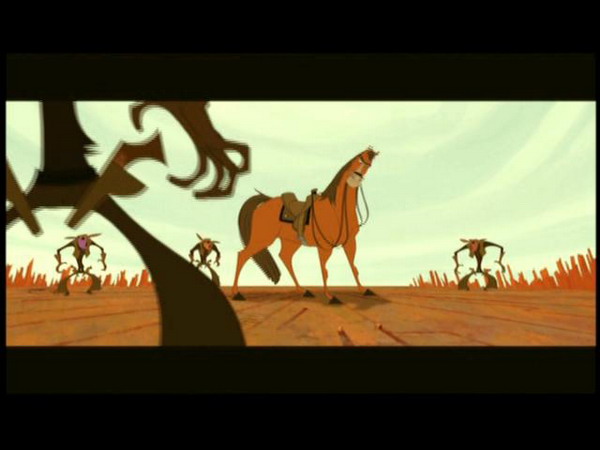 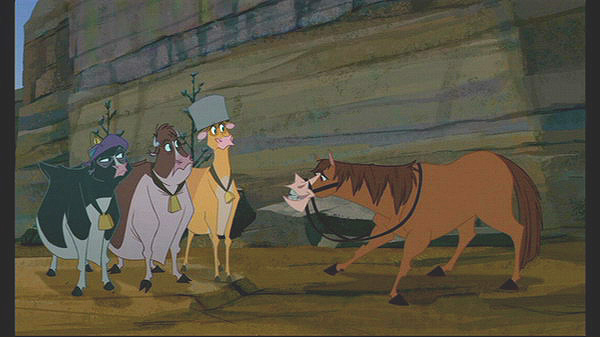 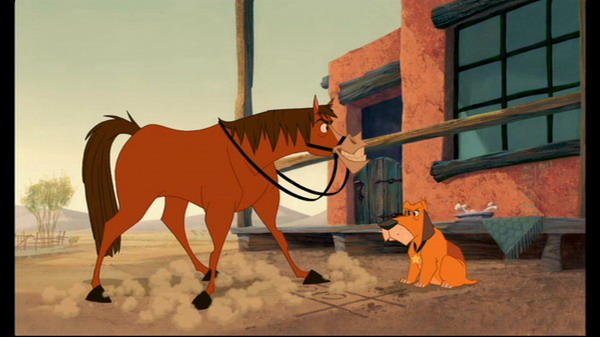 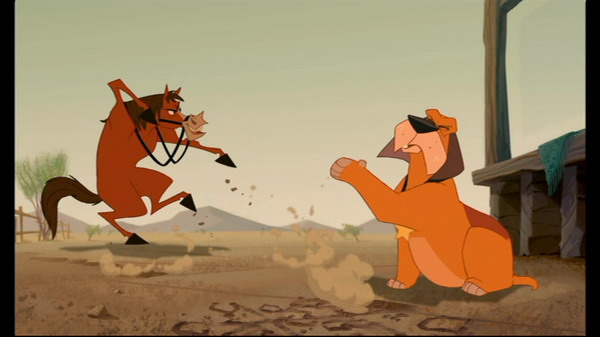 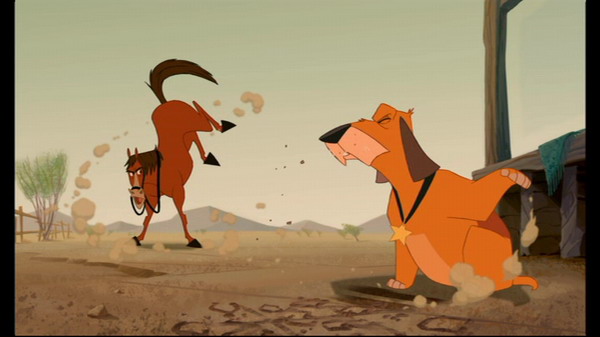 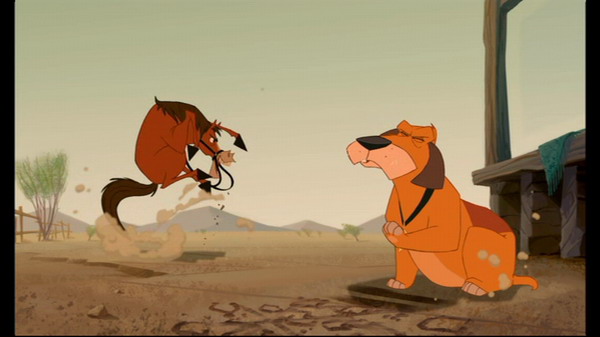 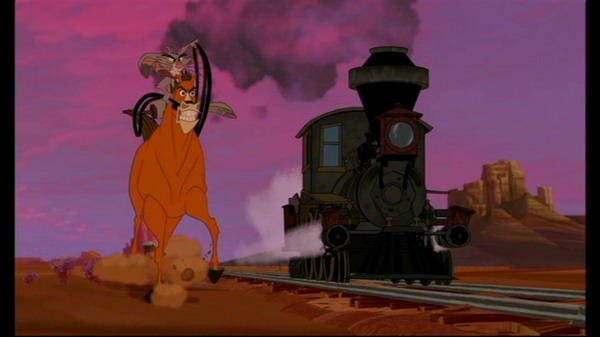 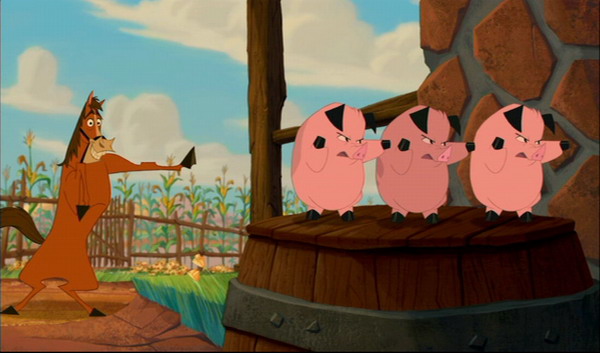 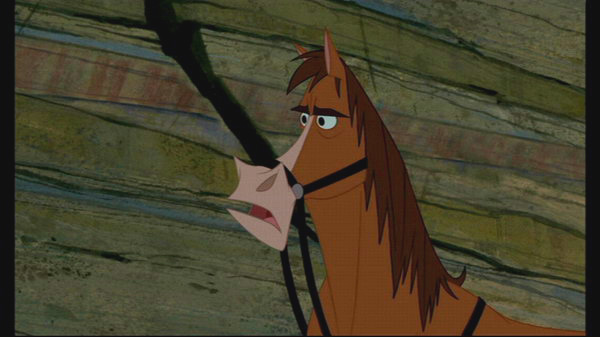 Words of wisdom from Buck...

Mrs. Calloway (about Buck): That horse is a legend in his own mind...

Buck: So long, sucker! He must be taking stupid lessons from that buffalo. (Junior the buffalo snorts down Buck's neck) Uh-oh

Vote for Buck as your favorite hero here!

If you feel so inclined, head to the Links page or, back to the homepage.