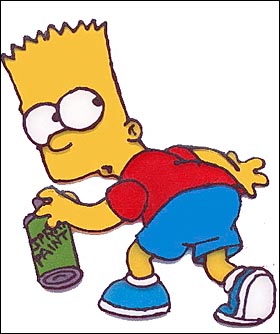 Bart is the pre-teen, trouble-making rascal with a hidden good side in The Simpsons (1989-present).

Bartholomew Jojo Simpson is pretty much an average ten-year-old, in almost every way... Except for that streak of delightful wickedness that runs through him causing him to perform pranks and make joke calls and moon figures of authority. For the most part, one would think Bart doesn't really belong in a list of prestigious, admirable Animated Heroes, but in the end, Bart has a heart of gold, and really does care for his family, and even Homer, his dad, which he has shown on numerous occasions. He's mostly naughty, but sometimes nice, and always entertaining. He has redeemded himself for his troublemaking many times over. He's a softy at heart, despite his graffiti-making and reckless disregard for Lisa's feelings. Bart's best friend (a friendship of convenience, Bart says, as he lives closeby) is Milhouse Van Houton, the hopelessly nerdy, but endearing, blue-haired, bespectacled kid down the street who harbors an eternal crush on Bart's sister, Lisa.

Bart is voiced by Nancy Cartwright, who is no stranger to animation voice-work.

Bart has had a couple crushes through the years the show's been running, including the devious Jessica Lovejoy, the Reverend's daughter, a next-door neighbor, Laura Powers, who prefers the bad boys, and the daughter of a famous action film star. Bart's greatest nemesis through the years, apart from the bullies at school, his family on occasion, and the Springfield Elementary Administration, Faculty and Staff, has been Sideshow Bob, who has on numberous occasions attempted to kill Bart. 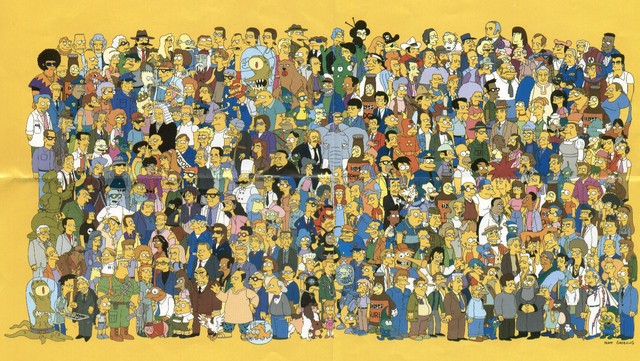 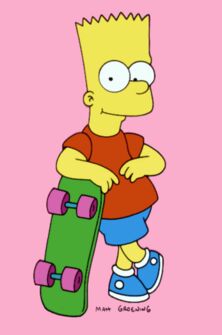 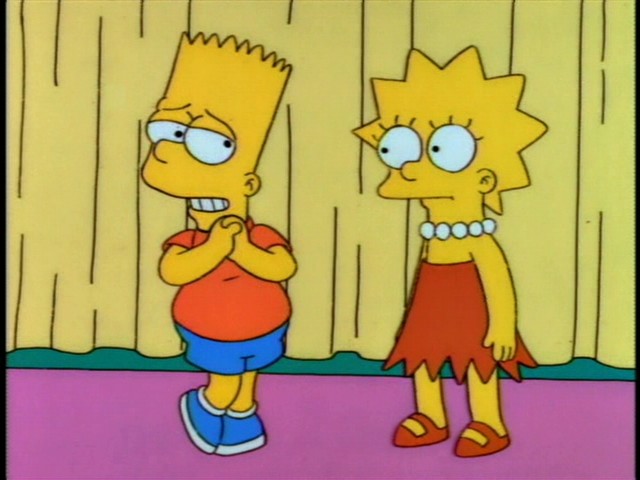 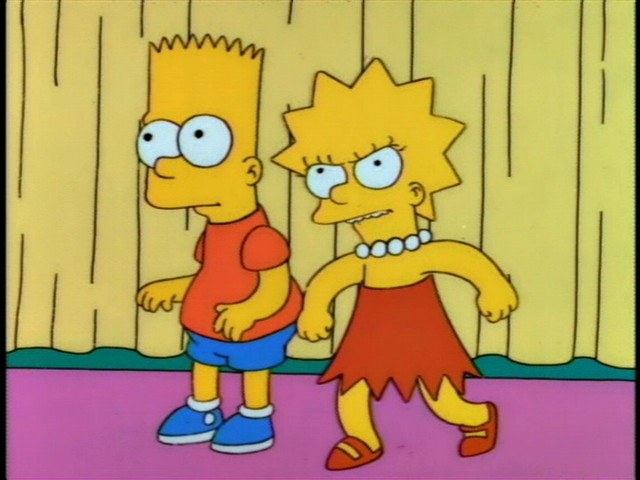 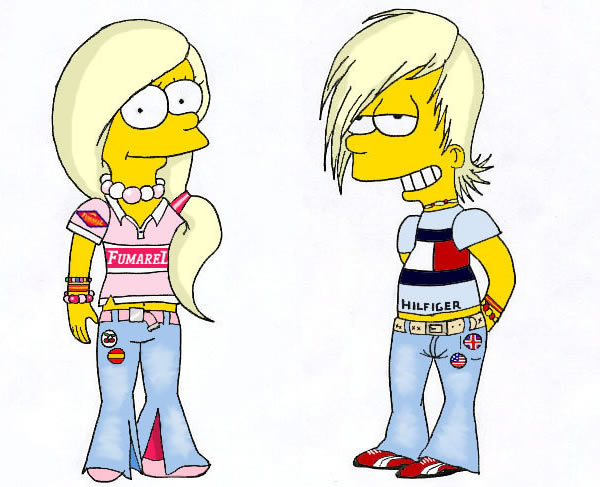 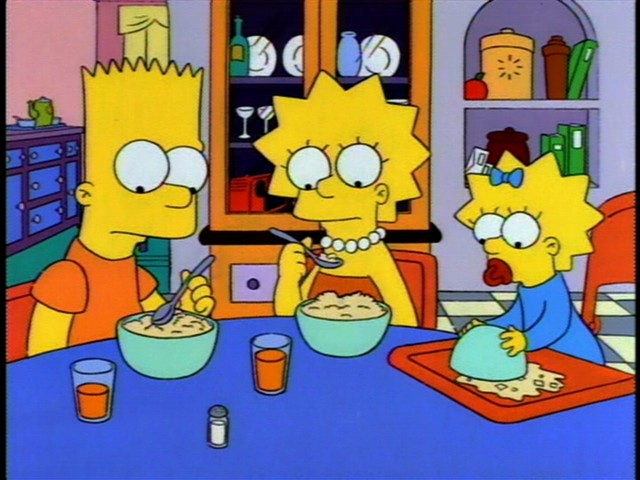 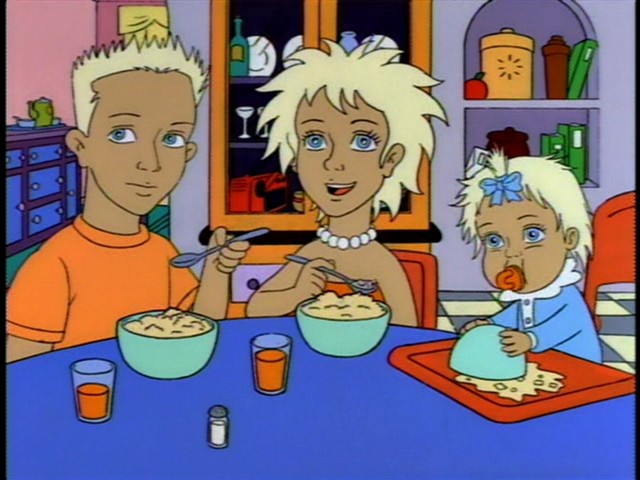 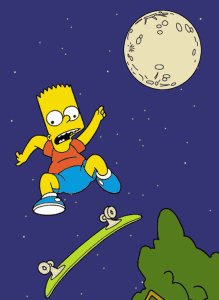 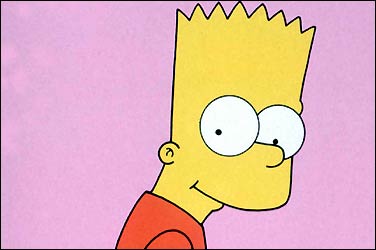 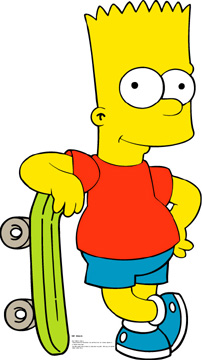 Bart: Hey, Lis. I think I got your lunch. (He hands Lisa a note from his lunch bag: "I Am Very Proud Of You")
Lisa: Oh yeah, I didn't think this was mine. (She hands Bart a note from her lunch bag: "Be Good. For The Love Of God, Please Be Good")

Bart: Uh, ma'am, what if you're a really good person but you're in a really, really, really bad fight and your leg gets gangrene and has to be amputated. Will it be waiting for you in heaven?
Sunday School Teacher: For the last time, Bart, yes!

Bart: I know Krusty's innocent, and I think I can prove it. But I need your help.
Lisa: You do? Why?
Bart: Oh, come on, you know why.
Lisa: No, why?
Bart: I'll never forgive you for making me say this, but... you're smarter than me.

Bart: Hey, Lis, what do you call those guys in chess that don't matter?
Lisa: Well, a blockaded bishop is of little value, but I think you're referring to a pawn.
Bart: Right, I am a pawn.

(preparing for the big miniature golf tournament)
Lisa: Eighth hole.
Bart: Aim for the octopus's third tentacle.
Lisa: Twelfth hole.
Bart: Bank it off the pink tombstone.
Lisa: Nirvana.
Bart: A state of bliss attained through the extinction of the self.

(Marge suggests they go out for sushi)
Bart: Sushi? Maybe this is just something one hears on the playground, but isn't that raw fish?
Lisa: As usual, the playground has the facts right, but misses the point entirely.

(the TV image is shaky)
Homer: Time for Dr. TV to perform a little surgery. (he hits the TV, and the picture goes fuzzy)
Bart: Looks like you lost the patient, Doc.

Bart: AAH! You ate my homework?... I didn't know dogs really did that.

Bart: I'm Bart Simpson. Who the hell are you?

Bart: (after they watch a foreign film) I was so bored I cut the pony tail off the guy in front of us. (holds pony tail to his head) Look at me, I'm a grad student. I'm 30 years old and I made $600 last year.
Marge: Bart, don't make fun of grad students. They've just made a terrible life choice.

Bart: I've said it before, and I'll say it again... aye carumba!

Willy: (thinking) No, no, go easy on the wee one. His father's going to go crazy and chop 'em all into haggis.
Bart: What's haggis?
Willy: Boy, you read my thoughts! You've got the shinning!
Bart: You mean shining.
Willy: Shh! You want to get sued?

Bart: You lie like a fly with a booger in its eye.
Homer: (laughing) The fly was funny, but the booger was the icing on the cake.

(after Homer turns on the Christmas lights)
Bart: It's craptacular.

(Bart doing a newscast on a kids news show)
Bart: Joe Banks, 82 years young, has come to this pond everyday for the past 17 years to feed the ducks. But last month Joe made a discovery: the ducks were gone. Some say the ducks went to Canada, others say Toronto. And some people think Joe used to sit down there near those ducks. But it could be that there's just no room, in this modern world, for an old man and his ducks.

Homer: Okay, now look. My boss is going to be at this picnic, so I want you to show your father some love and/or respect.
Lisa: Tough choice.
Bart: I'm picking respect.

Lisa: I want you to shut off the logical part of your mind.
Bart: Okay.
Lisa: Embrace nothingness.
Bart: You got it.
Lisa: Become like an uncarved stone.
Bart: Done.
Lisa: Bart, you're just pretending to know what I'm talking about.
Bart: True.
Lisa: Well, it's very frustrating.
Bart: I'll bet.

Bart: (finishes with his paintbrush) The beauty of it is, each parking space is a mere one foot narrower. Indistinguishable to the naked eye. But therein lies the game.
Milhouse: I fear to watch, yet I cannot turn away.
Principal Skinner: Blasted woman, you parked too close! Move your car!
Mrs. Krabappel: I'm in the lines! You got a problem, go tell your mama!
Principal Skinner: Oh, don't worry, she'll hear about this.

Bart: What a day, eh, Milhouse? The sun is out, birds are singing, bees are trying to have sex with them - as is my understanding...

Moe: Moe's Tavern.
Bart: Uh, yes, I'm looking for a friend of mine. Last name Jass, first name Hugh.
Moe: Hold on, I'll check. Hugh Jass. Hey, I want a Hugh Jass? Oh, somebody check the men's room for a Hugh Jass.
Hugh: Uh, I'm Hugh Jass.
Moe: Telephone.
Hugh: Hello, this is Hugh Jass.
Bart: Uh, hi.
Hugh: Who's this?
Bart: Bart Simpson.
Hugh: What can I do for you, Bart?
Bart: Uh, look, I'll level with you, mister. This is a crank call that sorta back-fired, and I'd like to bail out right now.
Hugh: All right. Better luck next time. (hangs up) What a nice young man.

(while watching a faculty talent show)
Bart: I didn't think it was physically possible, but this both sucks *and* blows.

Marge: Kids can be so cruel.
Bart: We can? Thanks, Mom.

Bart: We want the truth.
Sideshow Bob: You can't handle the truth. No truth-handler, you. I deride your truth-handling abilities.

Vote for Bart as your favorite hero here!