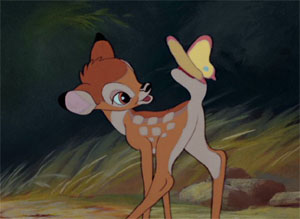 Bambi is the hero of Bambi (1942), and the upcoming Bambi II (previously known as Bambi and the Great Prince of the Forest) (2006).

Bambi's journey begins with his birth. Born in humble surroundings, Bambi is the newborn prince. Bambi grows up, learning lessons along the way about life, loss and love. Friendship also is an important theme introduced early in Bambi's life, as he quickly makes friends with Thumper, a local and confident bunny, and Flower (who Bambi accidentally named), a young and shy skunk. He also is introduced to Faline, a pretty and spunky young doe, who Bambi is immediately terrified of. At an early age, Bambi is taught the threat of Man to his very existence. He is thrilled when he is introduced to the wide and glorious expanse of the meadow, but his mother is quick to warn him to keep alert for danger. When winter comes, Bambi learns about the opposites that must be in nature, as well as in life, but he soon tires of the cold and dreary winter. When the first blades of grass appear in the meadow, Bambi is thrilled, but his happiness is soon dampered when the first hunters appear, and Bambi's mother, struggling to protect her fawn, is shot. As the snow falls silently, Bambi sheds a single tear when the Great Prince of the Forsest, Bambi's father, appears to inform him that he can't be with his mother anymore. When spring finally arrives, Bambi is all grown-up, having traded in his spots for antlers, and he, Flower and Thumper learn of the horrific results of being "twitter-pated" from Friend Owl. They vow such a terrifying thing will never happen to them, but sure enough, they are soon entranced by the wiles of their female counterparts, including Bambi, whose rapture is illustrated by him leaping through the clouds. His bliss with Faline, however, is interrupetd when Ronno, an aggressive and possessive buck vies for Faline's attention. Once disposed of, Bambi and Faline are free to be together, but the effects of Man surface again, their campfire spreading flames to the forest. Barely escaping with Faline and several other forest creatures, Bambi and his friends are able to return to the forest again with the spring. Spring also brings another surprise, two young fawns, the offspring of Bambi and Faline. Bambi watches proudly from a cliff with his father, and as his father steps down, Bambi takes his place as the Great Prince of the Forest.

As regards Bambi II, imdb.com has the following to say:

The new film is a 'midquel', the story taking place in the middle of the first Bambi movie. It is your basic teenage angst tale, dealing with Bambi coping with his Father, the Great Prince, and his finding of a new mate while an orphaned Bambi comes to terms with his Mother's death.

Bambi is featured in the film of his same name and the sequel.

Bambi's childhood-friend turned love is the sweet doe, Faline. Bambi's major nemesis is Man, since hunters are the ones who are responsible for his mother's death, but he also has a sort of rival in Ronno, the aggressive buck, when he challenges Bambi for Faline's affection. What do I have to say about Bambi?

This is definitely one of the absolute gems of the Disney catalogue. The art is beyond compare, the technology used (most notably the multi-plane camera) is cutting-edge, the symphonic score is concert-worthy, and the attention to detail regarding animal anatomy and movement is staggering. The Disney company really did their research with this film, and it shows. There's just the right blend of cartooniness and realism to the characters, and if you've seen any original concept art for this film, you know just how beautiful it is. Obviously a thematic predecessor of The Lion King, this film is basically a coming-of-age story, the whole Circle of Life thing, about the lessons you learn through life, and how important they all are. This film is often dismissed by fans of almost every age, because of it's uber-emotional quality, and the very saddening incident with Bambi's mother and the hunters, or the simple storyline. But Bambi's journey of self-discovery, wondering how life can be so wonderful and so terrible, is something that can speak to everyone on the earth.

All of this, and it still doesn't seem to have an anti-gun agenda (if anything, it's more anti-responsibility--what responsible hunter hunts for does, or leaves their campfire unattended?). It just tells the story, lets the audience make the connections, and touches the viewer on many levels. It's based on the 1926 novel by Felix Salten (who incidentally wrote a sequel of his own, entitled Bambi's Children), and is often cited as one of Walt Disney's favorite films (along with Cinderella). Just for fun, this is the Disney film with the fewest lines of dialogue. Rather like Dumbo, this and many of the old Disney films relied on the magic of animation and acting to tell the story and get an emotion across. 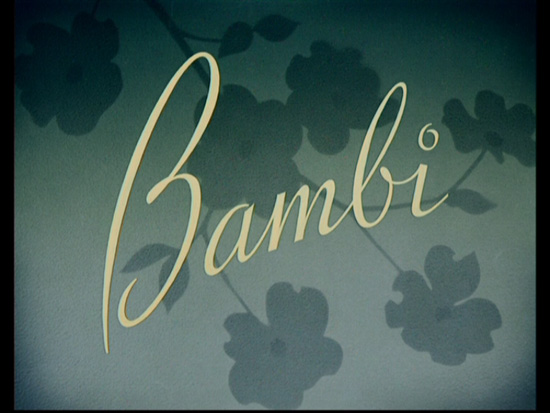 Some pictures of Bambi and Friends 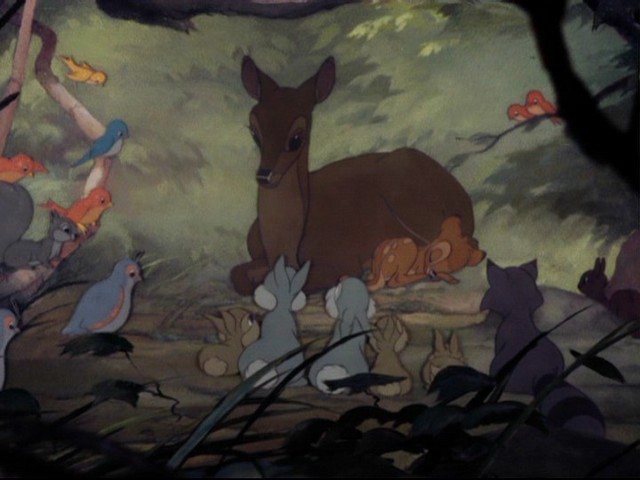 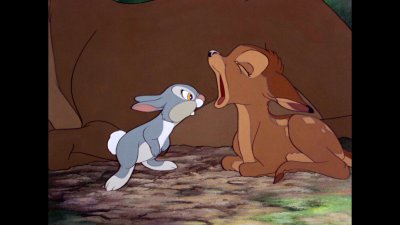 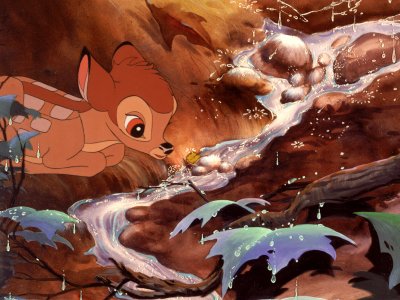 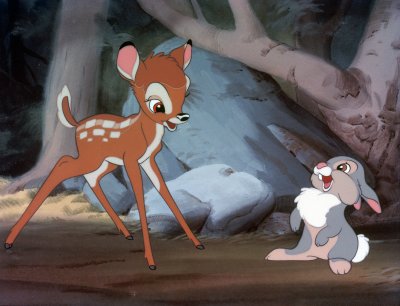 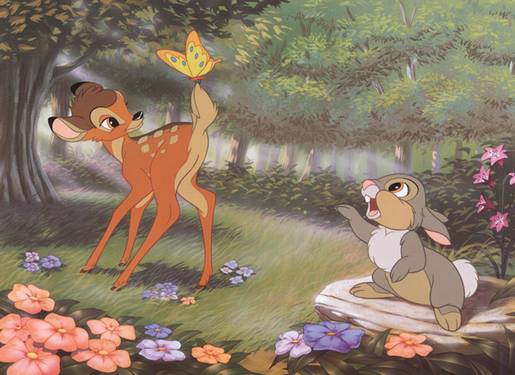 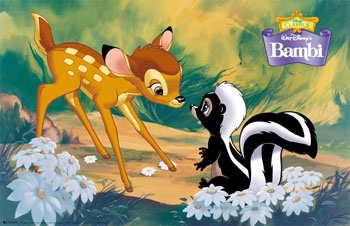 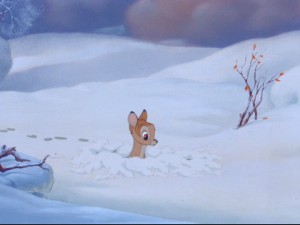 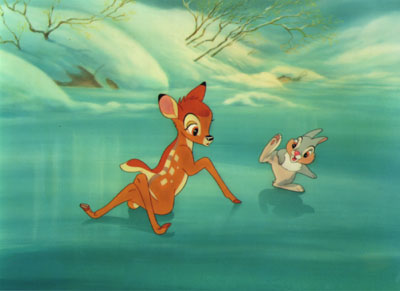 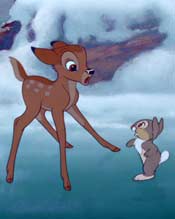 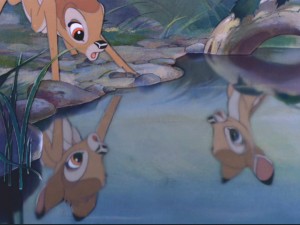 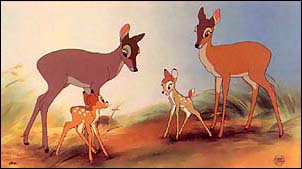 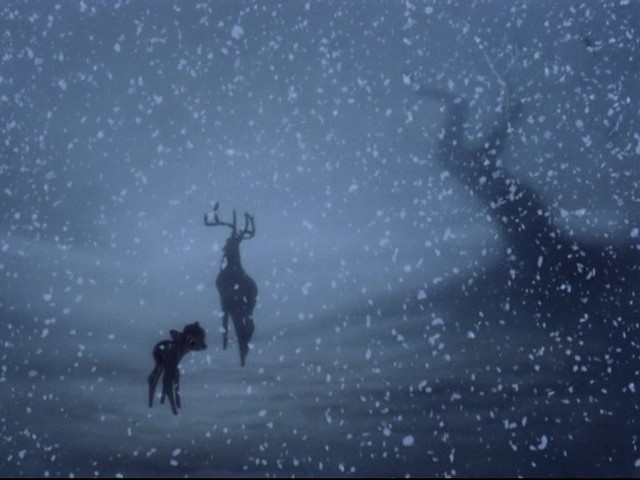 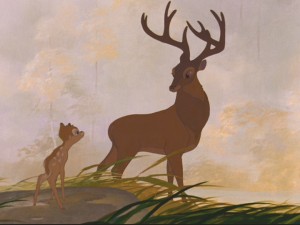 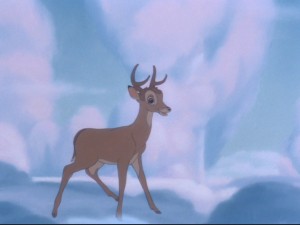 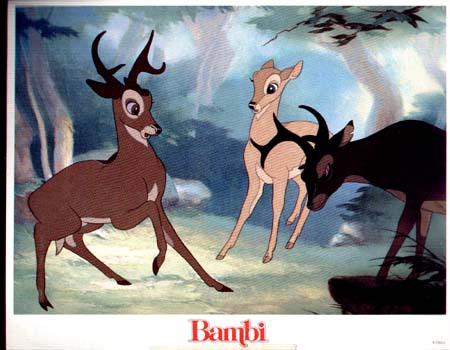 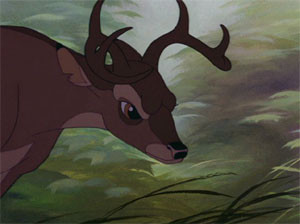 Bambi: What happened mother? Why did we all run?
Bambi's Mother: Man was in the forest.

Bambi: He stopped and looked at me.
Bambi's Mother: Yes, I know.
Bambi: Why was everyone still when he came in the meadow?
Bambi's Mother: Everyone respects him. For of all the deer in the forest, not one has lived half so long. He is very brave and very wise. That's why he is known as the Great Prince of the Forest.

Flower: (about two birds fluttering around) Well! What's the matter with them?
Thumper: Why are they acting that way?
Friend Owl: Why, don't you know? They're twitterpated.
Flower, Bambi, Thumper: Twitterpated?
Friend Owl: Yes. Nearly everybody gets twitterpated in the springtime. For example: You're walking along, minding your own business. You're looking neither to the left, nor to the right, when all of a sudden you run smack into a pretty face. Woo-woo! You begin to get weak in the knees. Your head's in a whirl. And then you feel light as a feather, and before you know it, you're walking on air. And then you know what? You're knocked for a loop, and you completely lose your head!
Thumper: Gosh, that's awful.
Flower: Gee whiz.
Bambi: Terrible!
Friend Owl: And that ain't all. It could happen to anyone, so you'd better be careful. (points at Bambi) It could happen to you... (points at Thumper) or you, or even... (Flower looks at Owl shyly) Yes, it could even happen to you!
Thumper: Well, it's not gonna happen to me.
Bambi: Me neither.
Flower: Me neither.

Vote for Bambi as your favorite hero here!

See the links section for Bambi links. Or, go back home.